On Russian TV, Brett Kavanaugh Is a Victim of “the Plague of Malignant Feminism”

Russian state TV describes Brett Kavanaugh as a victim of a global feminist pandemic that has previously felled Harvey Weinstein and Cristiano Ronaldo. 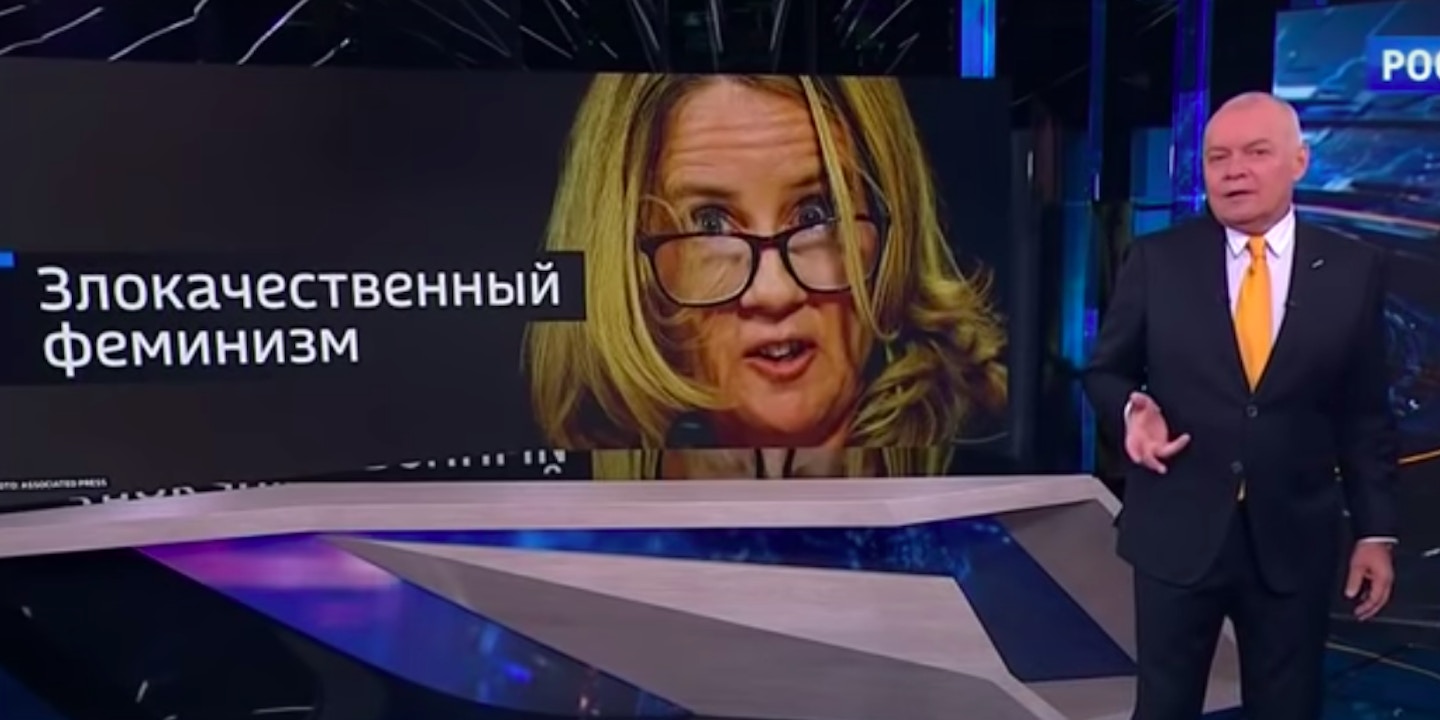 The Brett Kavanaugh hearings are being watched closely around the world, not least in Russia, where this week the host of a leading news show on state-run television defended the Supreme Court nominee as a victim of “the plague of malignant feminism,” a global pandemic that has previously felled Harvey Weinstein, Cristiano Ronaldo, and Ian Buruma.

Kiselyov also warned Russian viewers to beware of what he termed an illness “spreading from America to Europe and toward Russia,” in which “the infected ladies project their sexual fantasies onto men who have a successful life and career, accusing them of attempted rape.”

Kiselyov, whose weekly diatribes on the supposed threats to white male supremacy in Russia posed by foreign plotters and native homosexuals would not look out of place on Fox News, was chosen by Putin in 2013 to lead an official news agency charged with explaining Kremlin policy to the world.

But, unlike the Kremlin-financed Russia Today or RT — a network of channels in English, Spanish, German, French, and Arabic that exist to influence global public opinion — Kiselyov’s weekly, two-hour news review show is aimed squarely at explaining world news events to Russians, on the influential, state-controlled news channel.

Among the other victims of the feminist plot, Kiselyov said, were figures as diverse as the Fox News contributor Kevin Jackson, who was fired for calling Kavanaugh’s accusers “lying skanks,” Les Moonves, the former chair of CBS, and Ian Buruma, the New York Review of Books editor who lost his job after publishing an essay by Jian Ghomeshi, in which the disgraced Canadian radio host dismissed accusations of sexual assault against him.

Top image: In a recent broadcast on Russian state television, the host Dmitry Kiselyov told viewers that Christine Blasey Ford was infected with “the plague of malignant feminism.”