The internet won’t let go of the story of Jamal Khashoggi’s apparent assassination — and that’s a good thing for justice. 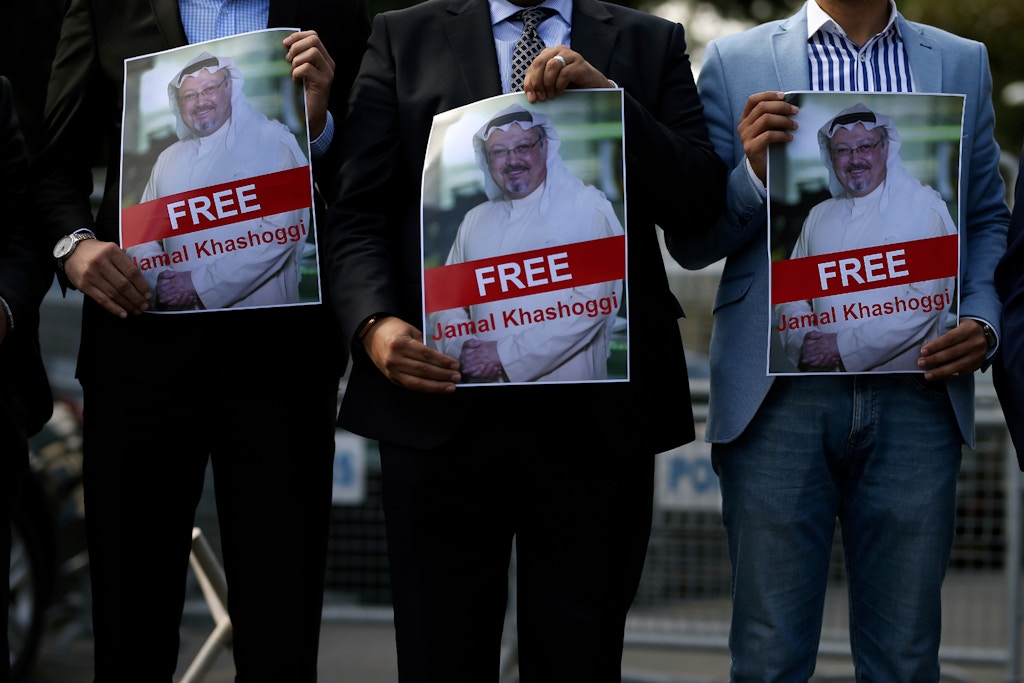 Holding pictures of missing Saudi writer Jamal Khashoggi, people gather in his support near the Saudi Arabia consulate in Istanbul on Oct. 5, 2018.

Many of my greatest heroes were assassinated.

I am thinking about Patrice Lumumba, the first prime minister of post-colonial Congo. Orchestrated by American and Belgian governments, his murder is sometimes called “the most important assassination of the 20th century.” He was just 35 years old.

I am thinking about South African intellectual Steve Biko, who was the 46th political prisoner killed while in police custody during Apartheid — which allowed imprisonment without trial or any type of due process. He was just 30 years old and died of a traumatic brain injury.

I am thinking of the fierce South African resistance leader, Chris Hani, who was shot and killed in 1993. Hani was the second most popular leader in the country and was murdered by a white supremacist with the support a longtime bigoted member of parliament.

Of course, I am thinking of Martin, Malcolm, and Medgar.

I am thinking of Goodman, Chaney, and Schwerner — the three young Freedom Riders who traveled to Mississippi to register Black folk to vote. This summer, I spoke for the Andrew Goodman Foundation and was so touched to meet his family. Fifty years later, they are still grieving the loss.

And I am thinking of the brave Brazilian activist Marielle Franco, gunned down in a drive-by assassination this by March.

In many of those cases, nobody was ever held responsible. Not legally or even in the court of public opinion. In fact, governments around the world have participated in targeted assassinations with little to no blowback for decades.

I think social media, and the way it democratizes information — and confrontation — has a chance to change all that.

On the afternoon of Tuesday, October 2, Washington Post columnist Jamal Khashoggi walked into the Saudi Arabian consulate in Istanbul, Turkey, to finalize some paperwork for his upcoming marriage. Exterior security camera footage clearly shows him entering the building. But not a single shred of evidence, from eyewitnesses or cameras, shows him leaving. The Saudi consulate now says they don’t have any footage from inside the building and give no explanation for why Khashoggi was never seen leaving.

What we do know is that Khashoggi, while careful to not call himself a dissident, was an informed critic of Saudi Crown Prince Mohammed bin Salman, known as MBS, and the manner in which he manages the country. Now, according to media reports, Turkish investigators believe that the Saudi government assassinated Khashoggi and literally cut his body into bits inside of the consulate. As heinous as this is, it doesn’t quite come as a surprise — for people who follow the exploits of Saudi Arabia — considering how the government arrested and imprisoned activists across the country.

Not a surprise, but a new low nonetheless.

Maybe inside the kingdom’s bubble, the Saudi royal family didn’t really understand that we’d find out and that we’d care. Maybe they listened to President Donald Trump repeatedly ramble on about how the press is the enemy of the people, and they assumed we all thought that. We don’t. And unlike previous generations, outraged strangers around the world are connecting with one another via social media.

In the past 24 hours, I’ve connected with various associates of Khashoggi. They are distraught — “I met with his family to tell them that we were pretty sure Jamal had been murdered by Saudi government — it was devastating,” Khashoggi’s friend told me.

But, even more than that, they are pissed — and they are determined to get to the bottom of this. These aren’t men and women who will soon let go. Several have emphatically said that they will make it their life’s mission to get justice for Jamal Khashoggi.

Every journalist, activist, organizer, and peace-loving person in the world should make that their mission. If we don’t hold them accountable, who will? Trump? It damn sure won’t be the American business community, who seems so pumped to cozy up with MBS that they are willing to look past every repressive action he’s ever taken.

Social media can be an ugly place. I see that ugliness up close every single day. But it’s also what allowed me to identify and track down the bigots who attacked and maimed a young man in Charlottesville, Virginia, during a white supremacist rally. Social media brought people together to take down Bill O’Reilly at Fox News. It forced companies to stop disseminating the callous conspiracies of Alex Jones. When used well, it’s a powerful tool that allows an everyday person to confront powerful brands and leaders face to face.

In Saudi Arabia, you just can’t call out MBS without fear of being arrested or killed, but Twitter is an irreverent medium when addressing that type of power. And that’s a good thing.