Roundup of Wild Horses in California Could Lead to Illegal Slaughter

This week, the Forest Service began a roundup of 1,000 wild horses in the Devil’s Garden region of Modoc National Forest, a designated wild horse territory. Depending on who you ask, the wild horses of the Devil’s Garden Plateau, in the northeastern corner of California, are a magnificent part of the state’s natural heritage or an invasive blight on a fragile landscape.

“These are living symbols of the historical pioneering spirit of the west,” said Suzanne Roy, campaign director for the American Wild Horse Campaign. “They’re living icons, symbols of freedom.”

According to the U.S. Forest Service, however, they’re also a pest.

This week, the Forest Service began a roundup of 1,000 mustangs in the 470 square-mile Devil’s Garden region of the Modoc National Forest, which is a designated wild horse territory. Wild horse advocates fear that hundreds of these horses could end up in Mexican and Canadian slaughterhouses.

The roundup, or, in the language of the Forest Service, the “gather,” involves buzzing the landscape with helicopters to flush bands of terrified mustangs out of the trees, corralling them together, and pushing them into the wide end of a funnel-shaped enclosure. There, a wrangler sends a trained “Judas horse” galloping down the enclosure, leading the other horses in a stampede down to the narrow end of the funnel as the gates are locked behind them.

Once they’re trapped in the pen, the stallions are separated from the mares, and the mares from their foals. That moment, said Roy, is “the end of their family and their freedom.”

After that period however, the remaining senior mustangs will be sold for $1 each, up to 36 a week per buyer, “without limitations” — meaning that they can be sold to buyers who may transport the horses to Mexico or Canada and sell them to slaughterhouses. The last horse slaughterhouse in the United States closed in 2007.

Opposition to horse slaughter in the United States is overwhelming. For years, Congress has prohibited the Bureau of Land Management, which manages the vast majority of public lands serving as wild horse habitat in the United States, from selling mustangs to buyers who will in turn resell them for slaughter. The prohibition has been routinely included as a rider in Congress’s annual appropriations for the Interior Department, which includes the BLM.

The Forest Service, however, is part of the Agriculture Department, which is subject to no such restriction. Under previous administrations, the Forest Service has abided by the prohibition anyway, recognizing that Congress intended to ban the sale of mustangs for slaughter generally, not just by the BLM. Under the Trump administration, which has proposed eliminating the rider in next year’s budget, that pattern has begun to change.

“We would love to adopt all these horses out,” said Amanda McAdams, the Forest Supervisor for the region. “These are really pretty marketable horses — strong and sturdy.” But, she continued, “as a last resort, we’re considering selling horses without limitations.”

By sending wild horses into the slaughter pipeline, the Forest Service hopes to avoid expenses the BLM incurs by caring for mustangs removed from the range, but not placed in private adoption. According to the BLM, these costs account for two-thirds of its Wild Horse and Burro Program budget.

“What we’re really dealing with is managing the taxpayer money in a fiscally responsible way,” said McAdams. “Selling without limitations keeps us from putting them in long-term storage where we’ll be paying for them for the rest of their lives.”

At the same time, selling horses for slaughter will allow the Forest Service to rapidly depopulate the landscape, allowing it to rebound from impacts that the agency attributes to the horses’ overuse. 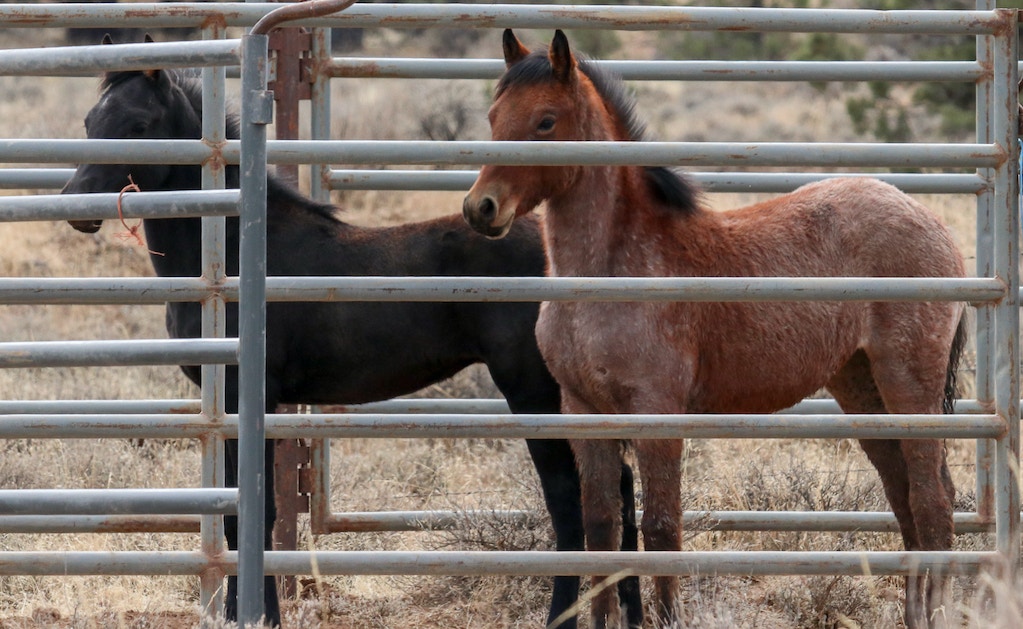 Wild horses from the Devil’s Garden Wild Horse Territory in the Modoc National Forest are contained in trap site pens.

According to Laura Snell of the University of California Cooperative Extension, who works closely with the Forest Service, “The population of horses on Devil’s Garden needs to be between 200 and 400 animals. It’s now at nearly 4,000.” Snell holds the horses responsible for land degradation on the high desert plateau, including the destruction of native grasses by overgrazing and the depletion of scarce water sources.

“We’re really just trying to get back to some ecological balance,” said McAdams.

Roy, however, believes that the Forest Service’s real motivation for diminishing the wild horse population in Devil’s Garden is to appease the livestock industry.

Devil’s Garden, like the vast majority of public lands, is leased out to ranchers to graze their cattle. Roy believes that ranchers see the wild horses as encroaching on their pastures — even though cattle in Devil’s Garden vastly outnumber mustangs and are subsidized richly by taxpayers. Ranchers pay for grazing rights on public lands at far below market rates: $1.41 per animal per month, versus more than $20 on private ranges.

Indeed, the Forest Service’s plan for wild horses in Devil’s Garden — the plan that set the limit for a sustainable mustang population at just a few hundred — was paid for by the California Farm Bureau, an agriculture industry lobbying group. Snell said it was “a common thing” for the Forest Service to rely on the agriculture lobby to fund a study in which its constituents have a direct economic interest. One of the plan’s authors, a former BLM wild horse and burro specialist named Susie Stokke, is married to a director of the Farm Bureau chapter for Modoc County, where Devil’s Garden is located.

“I call it the ‘Cattle Mob,’” Roy said of the clique of industry-connected players.

Instead of rounding up mustangs, Roy’s group wants the Forest Service to put mares on birth control and release them back onto the range — an approach that would reduce the horse population humanely, if incrementally. Roy has worked with the Forest Service to implement a pilot program, for which she has found outside funding.

McAdams, however, said that while she favors Roy’s plan in theory and wants to implement the pilot program, the population is currently too large for the approach to make an appreciable impact. “If we reach appropriate management level, we can manage them with fertility control,” she said. “But the numbers are so much greater than that.”

Roy believes that the roundup approach, not fertility control, is a false solution to the problem. She cited a National Academy of Sciences study, which concluded that roundups keep mustang populations artificially low, provoking more rapid population growth and reproducing the problem it is meant to fix.

Even worse, the byproduct of this approach is a surplus population of captured horses, at least some of which are likely to end up in slaughterhouses across both U.S. borders. This result is not just regrettable — it may be unlawful. The sale of horses “for human consumption” is illegal in California. The Forest Service requires that buyers acknowledge this law — but it does not address the sale for slaughter for purposes other than human consumption. Scott Beckstead of the Humane Society said that there is no other market for horse meat but human consumption, primarily in overseas markets. Hence, the Forest Service’s policy may violate California state law.

Setting aside its legality, the political unpopularity of the practice alone may be enough to compel a change in the Forest Service’s plan. The day before the roundup began, California Sen. Dianne Feinstein sent a letter to the chief of the Forest Service, Vicki Christiansen. She asked: “Can the Forest Service certify that no horses that are sold will be transferred to third-party buyers who may end up slaughtering the animals for commercial use?”

The senator is still awaiting a response.