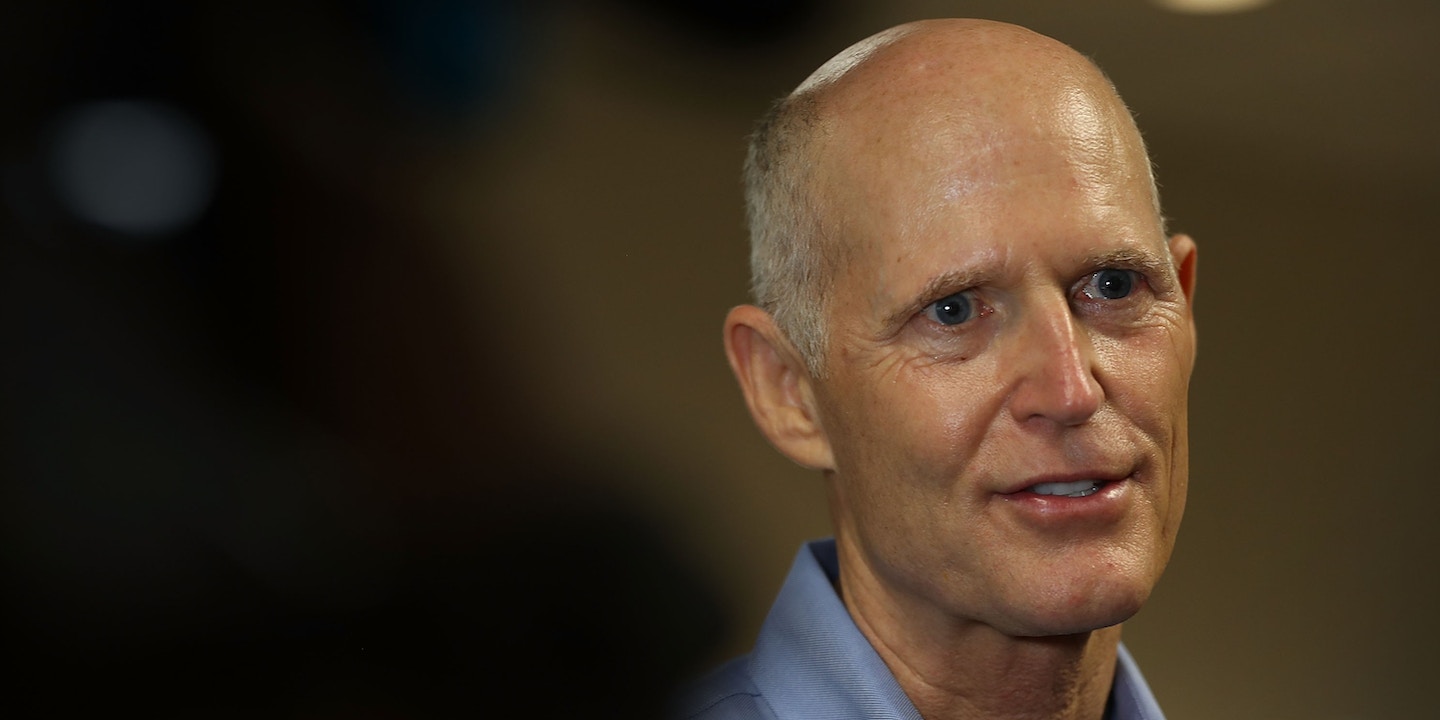 The transactions came in the run-up to the 2016 presidential election. Scott, a Republican, ran the pro-Trump Super PAC at the same time he served as a trustee of the Florida agency, the State Board of Administration. The SBA manages the state’s investments, about 80 percent of which are for the state pension fund’s 1 million members and retirees.

On September 26 of that year, Stephen Feinberg, the CEO of the sprawling private-equity firm Cerberus, donated $500,000 to Rebuilding America Now, Scott’s pro-Trump Super PAC. In early October, one week later, the SBA made a $200 million commitment to a high-fee, high-risk Cerberus fund, Cerberus FSBA Levered Loan Opportunities Fund LP, according to a statement from the SBA.

Feinberg made another $975,000 contribution to Scott’s Super PAC one month later, on November 3, making Feinberg its fifth-largest donor.

Scott is one of three trustees of the SBA, but neither the SBA investments nor the Cerberus donations appear to violate any state or federal rules. And the Cerberus investments represent a small fraction of the Florida pension fund’s more than $150 billion in assets.

Scott’s office referred inquiries to his campaign, which did not respond to an emailed request for comment. A Cerberus spokesperson emailed a statement that said, “Cerberus Capital Management adheres to the strongest compliance and ethical standards and all political donations by employees are subjected to compliance review and clearance.”

John Kuczwanski, a spokesperson for the SBA, said that the fund’s decision-makers would not have been aware of the donation. “Neither the Trustees nor their appointed members to the Investment Advisory Council (IAC) are involved in the selection of investments. The Trustees specifically, pursuant to Florida Statute and powers granted to them, hire the Executive Director & Chief Investment Officer to manage and make all investment decisions. Any suggestion that politics influenced the SBA’s investment decision on the Cerberus FSBA Levered Loan Opportunities Fund is baseless and without merit,” he said.

Kuczwanski said that Cerberus did not disclose the campaign contributions made to Scott’s Super PAC, adding that the SBA does not receive information about political donations and added that SBA investments are approved by internal staff, consultants, and attorneys. “Any suggestion of a link between individual contributions made and SBA investment decisions would be patently false,” he said.

Asked about Feinberg’s donations to the Scott Super PAC, ethics specialist Kathleen Clark said, “People in investments think in terms of returns, and this is a great return” for Cerberus. Clark, a professor of law at Washington University in St. Louis, said, “How confident are Florida voters and pensioners that when Scott was making decisions as governor he was doing so on their behalf as opposed to those he was raising money from? Is he representing the people of Florida, or donors? Can we have confidence he’s representing the people? This deal raises the question. Why was that the appropriate decision for the state board to make? Do we know this is in the best interest of the fund?”

Scott has already drawn criticism for prior state investments. He is in a tight race with incumbent Sen. Bill Nelson, D-Fla., a battle that analysts say could determine control of the Senate. Scott’s involvement in Rebuilding America Now was not limited to serving as its chair. Melissa Sellers Stone, Scott’s former chief of staff and adviser, was Rebuilding America Now’s spokesperson. One of the Super PAC’s media consultants, Alex Castellanos, told CNN that Scott “knows how to win campaigns like this, and how to inspire the financial support to get them over the goal line. He’s done it.”

(Castellanos is now advising another Scott Super PAC, New Republican, which is targeting Hispanic voters. In April, reporters from Maplight and Capital & Main revealed that Scott’s New Republican Super PAC had received tens of thousands of dollars in donations from managers with business before the pension fund. In September, Maplight and Capital & Main reported that Scott has personally invested millions in firms that did business with the state pension fund.)

“These kinds of shameless pay-to-play deals are inappropriate at best and illegal at worst. And it’s doubly disturbing when a governor with a fiduciary duty to protect the retirement security of Florida’s public-sector workers takes the bait and decides to plow their deferred wages into a high-fee private equity fund instead,” said American Federation of Teachers President Randi Weingarten, who represents 140,000 members of the Florida pension fund.

The SBA said that it has paid out over $4.9 million in fees to the Cerberus fund since the commitment was made. Fees for private equity firms like Cerberus are typically around 10,000 percent higher than for ordinary stocks and bonds, with a typical fee being 2 percent of assets and 20 percent of performance, as opposed to fees that are around 0.05 percent for index funds.

With that amount of money on the table, it’s no surprise that the industry’s relationship with public pension funds has led to scandal in the past. Former New York State Comptroller Alan Hevesi went to prison for getting kickbacks from private equity managers with business before the pension fund he controlled, as did the former CEO of the country’s largest pension fund, CalPERS, in a scandal that engulfed some of the country’s largest private equity firms.

In 2015, Donald Trump criticized Jeb Bush for receiving a high-paying job at Lehman Brothers after the SBA purchased hundreds of millions in Lehman securities during Bush’s tenure as Florida’s governor.

It is not clear that the fees private equity firms charge always translate into superior performance. Florida’s 2016 Cerberus investment under Scott has yielded a return of about 7.7 percent at an annualized rate from October 2016 through the end of March 2018, according to an analysis of data from the most recent SBA performance reports. The S&P 500’s annualized rate of return during the same time period was 20.1 percent.

Pension funds typically report more than one performance index. The one the SBA uses to demonstrate investment growth over time translates to roughly 7.7 percent annualized for its Cerberus investment. The SBA’s so-called Internal Rate of Return — which assumes compounding — for the Cerberus fund is 12.9 percent. The consulting firm McKinsey has noted industry criticism of relying on Internal Rate of Return to measure performance, saying, “For decades, finance textbooks and academics have warned that typical IRR calculations build in reinvestment assumptions that make bad projects look better and good ones look great.”

In the aftermath of the New York and California scandals, the SEC propagated the pay-to-play rule, which bans direct contributions from alternative investment managers to elected officials overseeing pension funds. When firms violate the rule, they are banned from managing money for the pension in question for two years. The SEC, however, has not applied the rule to Super PACs.

Current SBA Executive Director Ashbel Williams took office in 2008, and served in the same role from 1991 to 1996. Williams has attracted controversy for investing SBA assets in a firm run by individuals who invested in a hedge fund where Williams had worked. Williams was cleared by Florida’s ethics commission after an investigation.

Williams, like all SBA executive directors, serves at the discretion of the SBA’s trustees and makes investment decisions on its behalf, the agency said. By statute, the SBA trustees consist of Florida’s governor, attorney general, and chief financial officer.

Since Scott’s election, all three positions have been held by elected Republicans. Attorney General Pam Bondi has attracted controversy for declining to investigate Trump University, even as a PAC supporting her received a $25,000 contribution from Trump’s foundation.

Cerberus has attracted scrutiny for its ownership of the gunmaker Remington, for aggressive debt collection tactics in Europe, and for restricting referrals at its for-profit hospital chain. Trump appointed Feinberg, the Cerberus CEO, to head the federal Intelligence Advisory Board, seen as a potential conflict of interest due to Cerberus’s role as a large military contractor. Cerberus owns DynCorp, which was sued in 2016 by the Justice Department for False Claims Act violations, and its employees are being investigated for allegedly defrauding the State Department. The name “Cerberus” comes from the three-headed dog in Greek mythology that guards the Underworld.

This story was co-published with the Young Turks Network.