This week, over the vehement objections of Rep. Keith Ellison, D-Minn., and his ex-wife Kim Ellison, a Minnesota family court official unsealed the divorce files for the couple’s 25-year marriage. While divorce records are typically public, courts seal them if both parties agree, and no one else objects.

A lawsuit to unseal the records was filed in September by a far-right news site, Alpha News, and soon joined by the Minneapolis Star Tribune. The two organizations claimed the public had the right to view the records, as Keith Ellison is running for state attorney general and has been accused by his ex-girlfriend, Karen Monahan, of attempting to pull her off a bed during a domestic argument. (He denied the allegation.) Kim Ellison, an elected member of the Minneapolis Board of Education, has since said that her ex-husband never abused her in the four decades she’s known him — and the two Ellisons pleaded for respect for their privacy.

The allegations against Keith Ellison, which were made public in the days leading up to his August primary, have threatened to derail his bid for attorney general. His opponents, including anti-Muslim bigots, have seized on them as evidence of his unfitness for office, while Democrats have largely tiptoed around the issue, neither condemning nor fully standing behind Ellison. (Two national women’s groups, UltraViolet and the National Organization for Women, called on Ellison to drop out of the race in August.)

The divorce records, unsealed Wednesday, don’t contain any information that indicts the congressman, as some of his political opponents seemed to be hoping they would. Instead, they reveal evidence of a difficult marriage unsettled by medical issues, and one in which Keith Ellison was himself subjected to frequent physical attacks. “It was very humiliating to admit that I was a domestic abuse victim,” he wrote in a 2015 court affidavit. 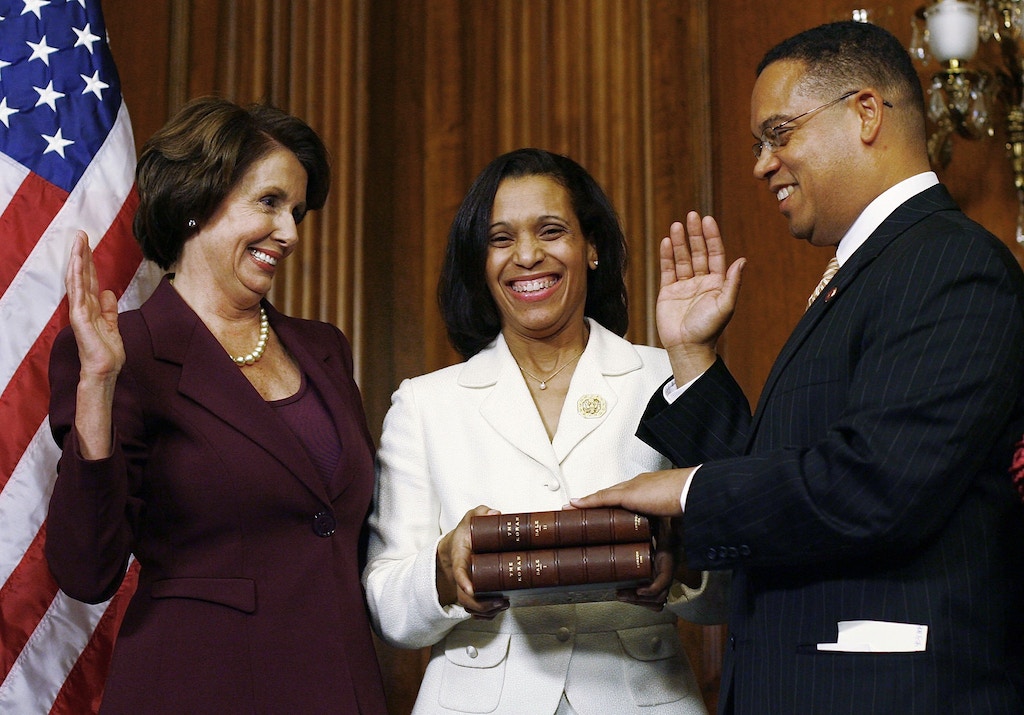 Keith Ellison takes his oath of office by swearing on a Koran during a ceremonial swearing in with Speaker of the House Nancy Pelosi, left, and his wife Kim, center, in Washington, D.C., on Jan. 4, 2007.

In a statement released Wednesday, Kim Ellison condemned the judge who released the files, as well as the news organizations that pressed to expose details of her personal medical and mental health history.

“My divorce file contains details of the most difficult time in my life, when I was struggling with my diagnosis of multiple sclerosis,” she wrote on Facebook. “I was scared, confused, worried, angry, and became depressed. It is a record of that time that I never thought a court would force me to share with the public. … I am ashamed that a judge has allowed an alt-right website that is openly working to defeat Keith, and the Star Tribune that followed their lead, to exploit and stigmatize my illness for their own ends.”

Kim Ellison went on to say she is in a better place, managing her medical condition, giving back to her community, and maintaining strong ties with Keith Ellison and their children. “My message to people living with MS or depression is that it can get better. My message for couples going through a divorce is that it does not have to be the end of your family.” She said she would not be commenting further.

Keith Ellison, meanwhile, released a statement acknowledging that as a public official, his personal life falls under higher scrutiny. “But to pry into the details of a sealed divorce file that the Court previously ordered closed, on the eve of an election, is shameful and outrageous,” he said. He described his marriage with Kim Ellison as a “storybook” until the onset of her multiple sclerosis, “which was not diagnosed until long after she was suffering the effects of it.” He said he attributes the difficulties in their marriage to the disease, and his failure to understand it at the time.

On August 11, Austin Monahan, the son of Keith Ellison’s former girlfriend, Karen Monahan, wrote a lengthy Facebook post alleging he had discovered a video on his mother’s computer, almost two minutes long, that showed Keith Ellison dragging his mother off the bed. Austin Monahan wrote that he was bringing this allegation forward despite his mother’s reluctance to do so. (Karen Monahan has since clarified that Ellison attempted to drag her off the bed, knocked off her slipper in the process, but did not ultimately drag her off.) She and her son have also alleged that Ellison was emotionally abusive, frequently describing his behavior as “narcissist abuse.”

The alleged video has become the center of the political debate, as Karen Monahan says she has it but wishes to keep it private, even from her own attorney, the police, investigators, or a reporter to verify its existence. She has provided different reasons, including that she misplaced it, that it is too traumatic to share, that it is packed away in storage, and that she should not have to provide video evidence to be believed.

The Democratic-Farmer-Labor Party called for an investigation into the alleged incident, and in early October released a report concluding that the physical abuse could not be substantiated because Karen Monahan would not share the video evidence. A law firm with ties to the local Democratic Party conducted the investigation, limiting its scope to the single allegation of physical abuse.

Karen Monahan and others have dismissed the DFL investigation as biased, in part because the investigator did not treat her friends who corroborated her account as dispositive. They’ve also said that the law firm that conducted the investigation, Lockridge Grindal Nauen, could not have been impartial, noting that employees and owners of the firm have donated nearly $50,000 to Keith Ellison’s campaigns since 2006. The DFL quickly announced it would turn over its investigation to local authorities for further probing, and Keith Ellison has also asked the House Ethics Committee to investigate the allegation. “I am innocent and eager to see this entire matter resolved,” he said.

The unsealing of the divorce records is just the latest chapter in the intense politicization of the allegations against Keith Ellison. In early October, Karen Monahan retained the legal services of Andrew Parker, a conservative talk show host and the former boss of Keith Ellison’s Republican opponent for attorney general, Doug Wardlow. Parker had invited Wardlow on his show in December 2017, and urged his listeners to vote for him — speaking of the importance of electing a Republican to the state’s highest legal office.

Karen Monahan and Parker recently appeared together for interviews on “Full Measure,” a national television show broadcasted on the ultraconservative Sinclair network, which owns local stations around the country. Parker also made separate appearances on Fox News to discuss Karen Monahan’s allegations.

Some of the groups and individuals capitalizing most enthusiastically on the abuse allegations against Keith Ellison have a history of promoting anti-Muslim propaganda in the state and have smeared Ellison, the first Muslim elected to Congress, for years. Alpha News, the right-wing website that sued for the divorce records, was the same website to first claim that Ilhan Omar, the Somali-American state legislator who will most likely be elected to represent Minnesota’s 5th District in U.S. Congress next month, may have married her brother to commit immigration fraud. Omar dismissed the rumors as “absolutely false and ridiculous,” but more than two years later, the story continues to dog her campaign. In a 2016 article typical of the site, Alpha News published a story with the headline, “Does Rep. Keith Ellison Have Ties to Radical Islam?” — and suggested the answer is yes.

Laura Loomer, a prominent “alt-right” activist known for social media attacks on Muslims and Muslim politicians, has also hounded Keith Ellison’s campaign about the accusations. Loomer has made numerous attempts to disrupt Keith Ellison’s campaign events, including one at the Minnesota State Fair, and has been photographed with Republicans running for state office. She has also attempted to leverage her large internet following against him. In early October, for example, she urged her 227,000 Twitter followers to ask Keith Ellison about “those domestic violence allegations and his ties to Jihadis.”

And then there is Wardlow, the Republican attorney general candidate himself. This week Bluestem Prairie, a progressive blog covering Greater Minnesota and South Dakota, reported on a fundraising letter mailed by Wardlow’s campaign that includes statements like, “As a Muslim, Ellison has hung around radical Islamic groups and defends known terrorists,” and, “It isn’t just that Keith hangs around with radicals and terrorists. Ellison himself is a radical.” Text on the envelope for the Wardlow fundraising letter links the Islamophobic smears to Karen Monahan’s assault allegation. It has been previously reported that Karen Monahan requested to meet Keith Ellison in early June, for assistance and advice regarding a mutual friend. They met for coffee on June 4, and Monahan referenced the alleged video at the meeting, though she declined to produce it when Ellison asked her to. The next day, Ellison filed to run for attorney general. Monahan told the DFL investigator that this was a “triggering” event that “screamed entitlement.” On June 6, Karen Monahan began treatment with a psychologist for the first time. The therapy notes from that session, which Monahan consented to disclose to the investigator, show her telling her new doctor that Ellison “dragged her out of bed yelling ‘fuck you bitch I hate you’” and that “kids saw on video.”

The DFL investigator concluded the assault claims were not supported by the available evidence, as Karen Monahan refused to let her privately review the alleged video. “That the accusing party claims to have but refuses to provide key, dispositive evidence that the accused has flatly denied, causes me to conclude that the allegation is unsubstantiated,” she wrote. (Karen Monahan’s lawyer told The Intercept that he has not seen the video either.)

The investigator did report speaking with several friends of Monahan’s, who said they heard about the incident four or five months after it allegedly occurred, and about 18 months before the public release of the allegations. The investigator said this “lends credibility” to the allegations, though she still ultimately felt that these accounts were not sufficient proof to settle the question.

One poll released in mid-September showed Keith Ellison and Wardlow locked in a tie, and another produced around the same time period showed Ellison with a small lead. Earlier this month, Minnesota Public Radio reported that Wardlow told a group of supporters at a private fundraiser that if he wins, he will purge Democrats from the attorney general’s office. “We’re going to fire 42 Democratic attorneys right off the bat and get Republican attorneys in there,” he said in remarks caught on tape.