The Pittsburgh attacker blamed Jews for bringing migrants into the U.S. There’s a direct connection to Donald Trump’s anti-immigrant rhetoric. 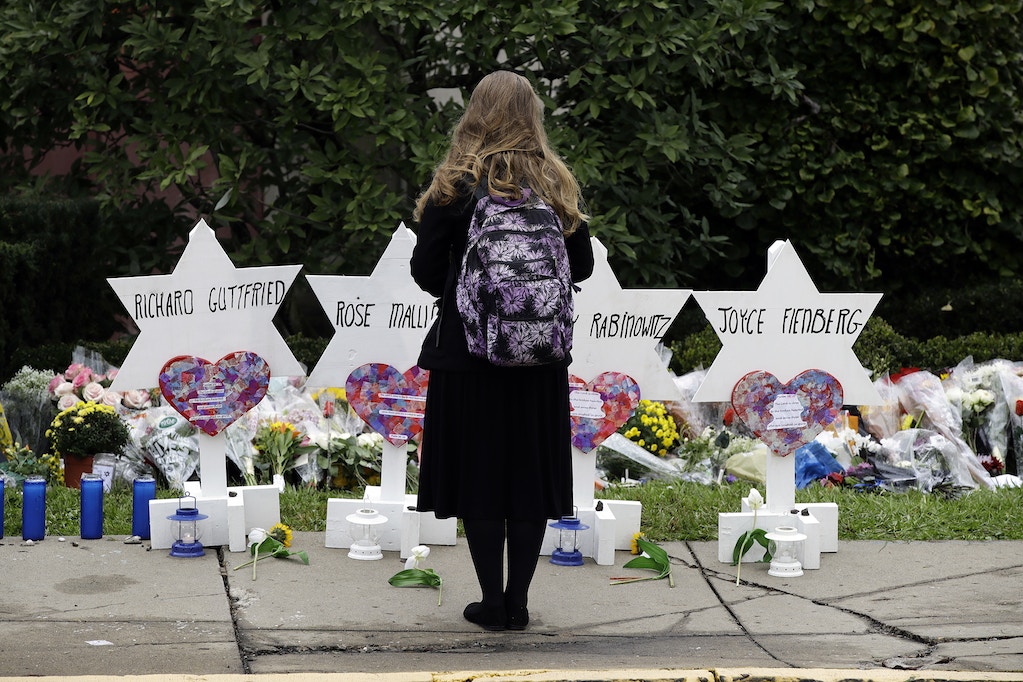 A person stands in front of a memorial with the names of those killed in the Tree of Life Synagogue shooting in Pittsburgh, Pa., on Oct. 29, 2018.

On the evening of October 21, Brian Schatz, the U.S. senator from Hawaii, wrote a tweet that proved to be prophetic. Looking ahead to the week that just passed, he said, “I just have a feeling that this coming week is going to be wacky and not in a good way. No matter what madness may come, let’s just keep talking to voters everywhere about health care and fighting corruption.”

I believe in feelings and hunches. Schatz felt something. I know it’s hokey for me to report on his sixth sense, but we’re in a peculiar time.

This past week was one of the worst in modern American history.

An avid supporter of President Donald Trump mailed 14 pipe bombs to a mix of prominent Democrats, outspoken critics of the White House, and CNN. Elsewhere, after failing in his attempt to break into a local black church in Louisville, Kentucky, a white man went into a nearby grocery store and shot and killed two black grandparents. Before he was caught by police, he assured an armed white man that he’d never shoot white people.

Then, on Saturday, the unthinkable happened: Driven by white supremacist and neo-Nazi conspiracy theories, many of which Trump himself has advanced, a bigot with an AR-15 walked right into a synagogue in Pittsburgh and slaughtered 11 mostly elderly Jewish congregants.

Staring all of that in the face, Trump woke up Monday morning and blamed the news media for the “great anger” across our country. He tweeted, “There is great anger in our Country caused in part by inaccurate, and even fraudulent, reporting of the news. The Fake News Media, the true Enemy of the People, must stop the open & obvious hostility & report the news accurately & fairly. That will do much to put out the flame.”

The bigots and racists and white nationalists love Trump; they receive his barely coded messages loud and clear.

It’s difficult to rank Trump’s most dangerous tweets, but this one must be high on the list. In a week where CNN — along with a sitting member of Congress, a couple former presidents, a former vice president, and a former attorney general, among others — received bombs in the mail from one of his supporters, Trump called the media “the true Enemy of the People.” It’s breathtaking. He is signaling to the most disturbing forces in this nation that he supports them.

As always, the bigots and racists and white nationalists love Trump; they receive his barely coded messages loud and clear.

In the case of the Pittsburgh attack, it was Trump’s message that the so-called caravan of Central American migrants heading to the U.S. posed an existential danger to this country. It’s as false as could be, but the Pittsburgh killer latched onto it, grafting the idea onto his anti-Semitism and blaming Jews for the “invaders” coming to this country.

Early this morning, a British Trump supporter named Katie Hopkins — a columnist whose anti-Muslim work Trump has lauded in the past — unapologetically blamed the Pittsburgh synagogue shooting on the Chief Rabbi of the U.K.’s support for refugees. She literally blamed the Jews for the anti-Semitic slaughter of Jews in Pittsburgh. (Hopkins eventually deleted the tweet.) These are the kinds of people who love Trump, and whom Trump loves right back.

It’s easy for some people to say, “Ignore Trump.” And I think I could, if he were just the host of “Celebrity Apprentice” conning people into taking lousy classes at Trump University. But he’s the president of the United States. He is deeply influential with a potent core of Americans. And some of those prominent supporters are openly and publicly admitting that they aim to be violent.

Of course, Trump won’t fully distance himself from white supremacists and bigots, even when they are violent, because they are his most devoted base. Every time this man has a chance to pivot toward reconciliation, he doubles down and shows the nation his true colors. We saw it throughout his campaign. We saw it after Charlottesville. We’re seeing it now.

That’s why I have a hunch of my own: I think this thing is going to get worse — much worse — before it gets better.