“Killing Free Speech” refers to Democrats as “evil” and features white nationalists who make a correlation between gang rapes, Islam, and immigration. 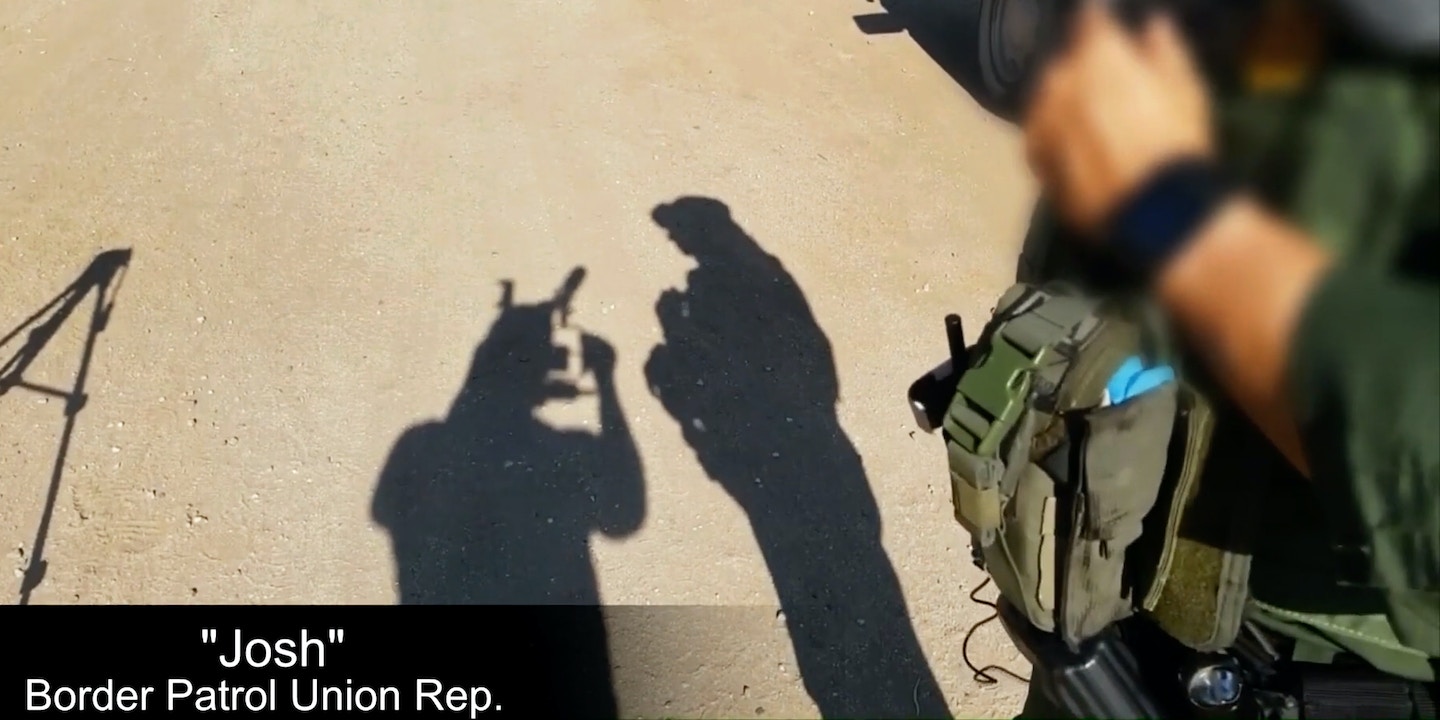 The National Border Patrol Council, the union representing Border Patrol agents across the country, is featured in a new video that includes white nationalists and anti-Muslim extremists. The video, titled “Killing Free Speech,” was endorsed by the union and recently shown by agents at a private screening in San Diego. The video is also expected to be shown in Texas, Los Angeles, and Washington, D.C., according to union representative Terence Shigg, president of the San Diego chapter of the NBPC.

The nearly hour-and-half-long video refers to Democrats as “dark and evil” and features a bevy of American and European far-right, anti-Muslim white nationalists who make a correlation between gang rapes, Islam, and immigration. The documentary also features members of the Proud Boys, a hate group designated by the Southern Poverty Law Center, that often aligns with white nationalists and are known for being misogynists and anti-Muslim. The Proud Boys participated in the deadly “Unite the Right” rally in Charlottesville, Virginia, and in mid-October several members of the Proud Boys were arrested in New York City after a violent street confrontation with anti-fascists.

In a press release, the NBPC describes “Killing Free Speech” as a “powerful spotlight on the terrifying assault on liberty in America today. A country heading down the road toward Orwellian control of information by a small but powerful cabal.” The release also invites viewers of the video to “dissect the daily propaganda used by the mainstream media who will stop at nothing to mislead the public and discredit and demonize those who risk their lives protecting America’s borders.”

The director of the video, Michael Hansen, who calls himself “the Dane” in the video’s credits and online, is a Danish immigrant who has made one other video, “Killing Europe,” which argues that immigration has contributed to an epidemic of rape in Europe. A third video, in what is apparently a franchise, will be titled “Killing Canada.”

At the beginning of “Killing Free Speech,” Hansen, wearing an Iron Maiden shirt and driving down the road with a child’s car seat in the back of his modest sedan, warns that the same forces destroying Europe — immigrants, Islam, the anti-fascist group antifa, the media, and political correctness — now threaten the United States. “Their first target is free speech,” he says to the camera on his dashboard. It’s clearly a low-budget project.

In an interview, Shigg said that Hansen approached the union about being in the video during the height of the family separation crisis at the border this past summer.

“The agents were tired of being called ‘Nazis’ or ‘jack-booted thugs’ or ‘immoral,’” Shigg said. And Hansen offered them a platform to reach viewers directly and not through the filter of the media, which he said is seldom sympathetic toward agents. “He was willing to let us speak freely,” said Shigg. “And that’s not something we generally get in the media.”

On the video’s Vimeo page, Hansen touts the Border Patrol’s involvement in the controversial video, in which “for the first time, Border Patrol agents agreed to be filmed to expose the media lies & smears about our agents and the crisis at the border.”

Shigg said that the Border Patrol union did not fund the video, and U.S. Customs and Border Protection said it would not comment on a “video that was not coordinated, sponsored, produced or approved by our agency. CBP does not endorse this video or the contents thereof.”

Currently, there are close to 20,000 Border Patrol agents in the field. The National Border Patrol Council represents at least 90 percent of them. Border Patrol agents have enormous power to conduct suspicionless searches at border and interior checkpoints within the “border zone,” which is up to 100 miles from any land or coastal border. Within 25 miles of any border, agents can also enter and search private property — though not homes — without permission from landowners.

In 2016, the Border Patrol union came out early in its support — giving its first-ever endorsement — to presidential candidate Donald Trump, who said he would embrace the ideas of “rank-and-file Border Patrol agents, rather than listening to the management yes men.” Since being elected, Trump has increased Border Patrol’s funding and called for 5,000 new agents to be hired. He has referred to undocumented immigrants as “rapists” and “animals.”

The section of “Killing Free Speech” devoted to the Border Patrol begins 44 minutes into the video, after Hansen confronts antifa members at a rally, then rides on a bus with Proud Boy members in full riot regalia. Hansen interviews Chris Harris, former director of legislative and political affairs for the San Diego chapter of the NBPC, Shigg, and an agent identified only as “Josh.” The sequence lasts about 20 minutes.

In the video, Harris says that family separation is “not as humane as it could be because the U.S. government could do better … but let’s be brutally honest,” he says. “Nothing was inhumane.” Harris says that agents have to make sure that the children actually belong to the parents and aren’t instead being exploited by human traffickers. “We don’t always know that they are the real parents.” Harris claims that most people arriving at the border do not have a legitimate claim to asylum.

“More and more [they are] trying to take away the legal terms that describe people that are coming to the United States and that are breaking the law,” Shigg claims in the video. “They want to put all of them into one group, which is immigrant.”

Josh echoes Shigg in the video, saying that the media makes no distinction between “illegal” and legal immigrants, treating them as one and the same. He also claims that the media deliberately deceives the public.

Shigg told me he wanted to make the video because it dealt with the issue of free speech. I asked Shigg, who is African-American, what he thought of being featured alongside white nationalists and anti-Muslim propaganda — and how such a video furthered the Border Patrol’s agenda, as he had described it, of talking directly to the American people and helping them understand what agents face day to day at the border.

“Our intent was to have a dialogue. We didn’t fund it. We didn’t write it,” Shigg said. “Part of the whole thing is free speech. He has the right to make that and put that information out there.”