Customs and Border Protection has grossly inflated its data on assaults against Border Patrol agents. Last November, reports that a pair of U.S. Border Patrol agents had been attacked with rocks at a desolate spot in West Texas made news around the country. The agents were found injured and unconscious at the bottom of a culvert off Interstate 10. Agent Rogelio Martinez soon died from his injuries. Early reports in right-wing media outlets such as Breitbart suggested that the perpetrators were undocumented immigrants, and President Donald Trump quickly embraced the narrative to bolster his campaign for a border wall.

To people familiar with the harsh terrain and the habits of undocumented border crossers, however, the news made little sense. Why would immigrants seeking entry to the U.S. hang out in the middle of nowhere, miles from the border, waiting to randomly attack law enforcement officers?

It was four months before the FBI concluded its investigation and determined that the most likely cause of Martinez’s death was an accidental fall. Meanwhile, media outlets across the political spectrum repeated statistics showing a sharp upward trend in the number of assaults against Border Patrol agents even as the number of undocumented immigrants apprehended while crossing the southern border has dropped.

According to U.S. Customs and Border Protection data, assaults on Border Patrol officers increased dramatically in fiscal year 2016, reversing a long downward trend. That year, CBP claims, there were 454 assaults on agents nationwide, compared with 378 in fiscal year 2015, a 20 percent increase. The increase from 2016 to 2017 was even more surprising. In 2017, according to CBP, there were 786 assaults, a spike of 73 percent, even as apprehensions fell from 415,816 to 310,532.

Almost the entire increase — 271 purported assaults — was said to have occurred in one sector, the Rio Grande Valley, in South Texas. A large number of the assaults supposedly occurred on a single day, according to charts and details provided by Christiana Coleman, a CBP public affairs spokesperson. In response to questions from The Intercept, Coleman explained in an email that “an incident in the Rio Grande Valley Sector on February 14, 2017, involved seven U.S. Border Patrol Agents assaulted by six subjects utilizing three different types of projectiles (rocks, bottles, and tree branches), totaling 126 assaults.”

According to conventional law enforcement accounting, this single incident should have been tallied as seven agents assaulted — not seven agents times six perpetrators times three projectiles. Subtracting the seven agents from 126 leaves 119 extra “assaults” that falsely and grossly inflate the data, making it appear to the public that far more agents were assaulted.

Coleman did not respond when later asked if any of the seven agents were injured. According to the FBI, most Border Patrol agents for whom assault data has been publicly reported were not injured. Rocks and water bottles don’t always hit their mark. Or they are never thrown in the first place — for reporting purposes, apparently, the mere brandishing of an object constitutes assault.

In addition to this one instance of clear inflation admitted to The Intercept, data from the Rio Grande Valley indicate 98 additional events in 2017, and several of these also appear to be padded. In almost all other Border Patrol sectors, a review of aggregate statistics for 2017 shows that the average number of assaults per incident is one, or at most two. But in the Rio Grande Valley, the average is about four assaults per incident. In all, the Rio Grande Valley contributed over 300 suspicious-looking “assaults” to CBP’s 2017 database, creating the illusion that agents were suddenly being assailed that year. A Border Patrol agent watches over a group of undocumented immigrants on Feb. 23, 2018, in McAllen, Texas.

According to James Tomsheck, former director of internal affairs at CBP, the agency’s method of counting assaults is highly unusual.

During a phone interview with The Intercept, Tomsheck said law enforcement agencies count the number of people assaulted, not the discrete acts of violence that occur during an incident. And that’s how it was done when he worked at CBP (he left in 2014). “Five rocks [thrown at] an agent would have been considered one assault,” Tomsheck said.

Tomsheck said that during his more than three decades of police work, he has never heard of any law enforcement agency multiplying assaulted officers by the perpetrators and the weapons. When I asked Franklin Zimring, a criminologist at the University of California, Berkeley and author of “When Police Kill,” if he’d ever heard of such a method, he burst out laughing. “No,” he said, laughing again. “I haven’t.”

When asked why CBP started using this irregular method, CBP spokesperson Carlos Diaz emailed The Intercept that “it is the most transparent method of reporting.”

Tomsheck’s recollections and Zimring’s assessment are borne out by years of data kept by the FBI, which compiles an annual national statistical report called LEOKA — short for Law Enforcement Officers Killed and Assaulted. The FBI has been publishing LEOKA reports since 1982. The FBI data is gathered from local and federal law enforcement agencies, including CBP. 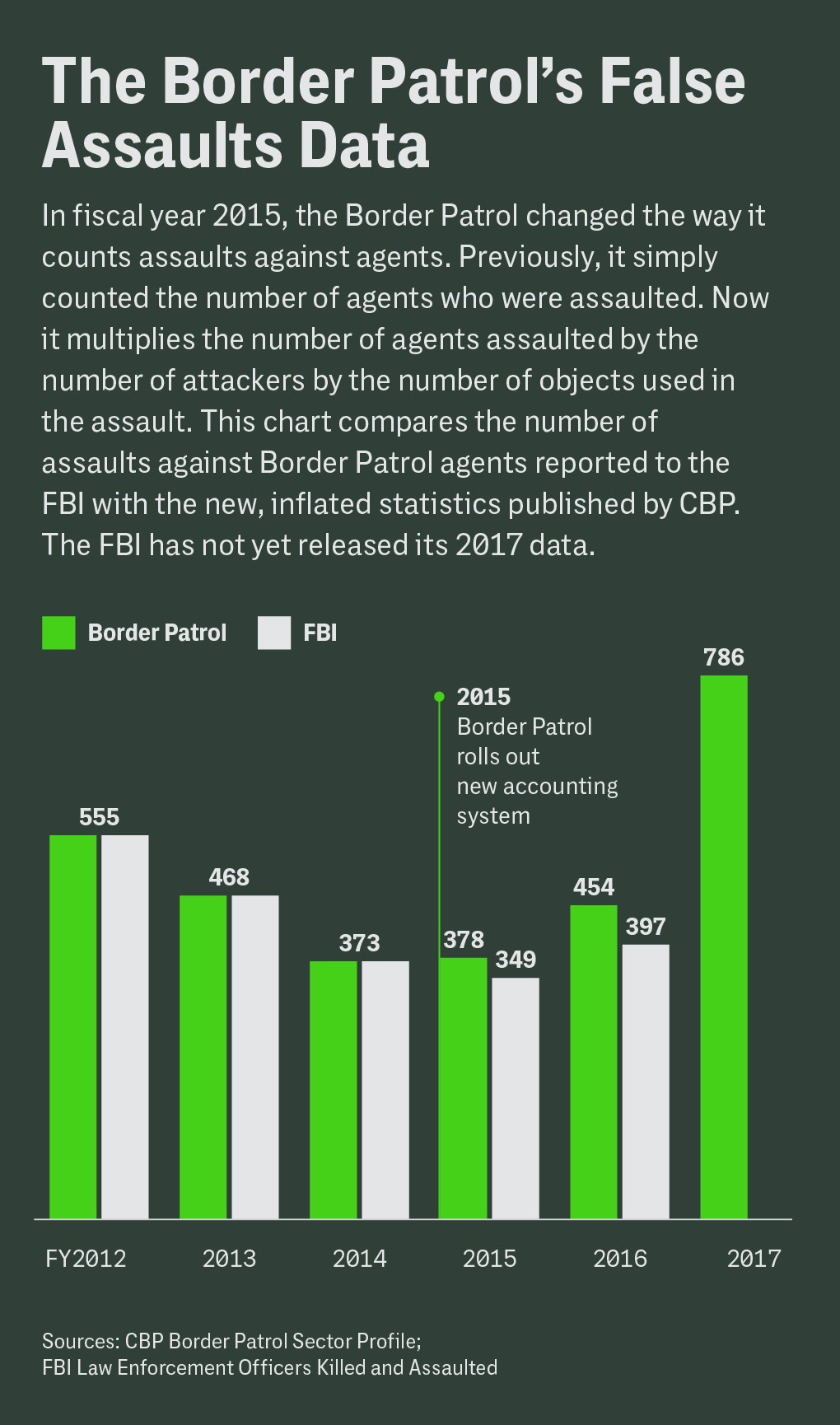 Graphic: Moiz Syed for The Intercept

Then, with no public discussion, the agency apparently veered sharply from traditional reporting practices to a new system that counts the number of agents assaulted during an incident, then multiplies that figure by the number of perpetrators and the weapons used, thus neatly reversing the downward trend on the number of assaults.

In October 2014 — the beginning of fiscal year 2015 — CBP began rolling out this new system, according to Coleman. The new accounting was piecemeal, rather than systematic, but it produced a 378 “assaults” figure for fiscal year 2015.

By contrast, the FBI’s LEOKA data shows that the downward trend in assaults continued in 2015, when, according to the FBI, 349 Border Patrols agents were victims of assault. The next year, the FBI lists 397 assaults, an increase over 2015, but nothing like the 454 figure published by CBP.

At first, CBP did not promote its new assault data. The numbers remained buried in obscure documents. The new system was fully put in place in early 2016, according to Diaz, the agency spokesperson, and later that year — three weeks after the election of Donald Trump — CBP’s hyped “assault” statistics were shared with politicians and the media.

Meanwhile, the American Civil Liberties Union of Texas office in the Rio Grande Valley was hearing allegations from migrants of attacks by Border Patrol agents. Some immigrants accused of assaulting Border Patrol agents during chases were claiming that they were innocent and that, in fact, it was the agents who had assaulted them.

Eliseo Luis-Garcia, a slender Guatemalan, was tried in Laredo earlier this year, accused of punching a burly Border Patrol agent during a chase. Marjorie Meyers, a federal public defender in the Southern District of Texas, described him as “this little guy who was more injured than the agent was.” The jury saw the evidence, Meyers said, and apparently believed it was not the immigrant who had assaulted the agent, but the other way around. Luis-Garcia was acquitted.

It was as if pitched warfare had exploded in the Rio Grande Valley of Texas, ground zero for the purported spike in assaults. Yet CBP issued virtually no press releases about mass assaults on agents by migrants. Nor did the purported spike make sense demographically. Large numbers of migrants fleeing violence in Central America, many of them women, are seeking refugee status in the U.S. They cross into Texas with children in tow, and instead of trying to escape from or resist the Border Patrol, they were detained. Adult men are the demographic most likely to tussle with agents, and their numbers have steadily declined over the past few years.

Michael Seifert, of the Brownsville office of the ACLU of Texas, called CBP’s inflation of statistics for political ends “deceptive to lawmakers and taxpayers.” Worse, he said, “their exaggerated claims erode the quality of life for all people who call the border home.”

The FBI will not be publishing its 2017 “officers assaulted” number for CBP until late May and declined to provide it to The Intercept. CBP also refused. Meanwhile, the agency continues to cite its inflated statistics, and the phony numbers continue to be used to justify Trump’s agenda. At the Department of Homeland Security’s 15th anniversary celebration in March, Vice President Mike Pence talked about why the Border Patrol needs $21 billion in additional funding “to provide our front-line agents with the personnel, the technology, the equipment, and the facilities to do their job.”

Pence said all this was needed because “one of the most shocking stories we heard was in the last fiscal year” when “attacks on our Border Patrol agents had increased by 73 percent.” This, he added, was why the Trump administration was seeking $18 billion for a border wall.

“And we will build that wall,” Pence thundered, “for the American people and our security.”

Top photo: A Border Patrol agent apprehends an undocumented immigrant near the U.S. border with Mexico on March 27, 2018, in the Rio Grande Valley sector near McAllen, Texas.