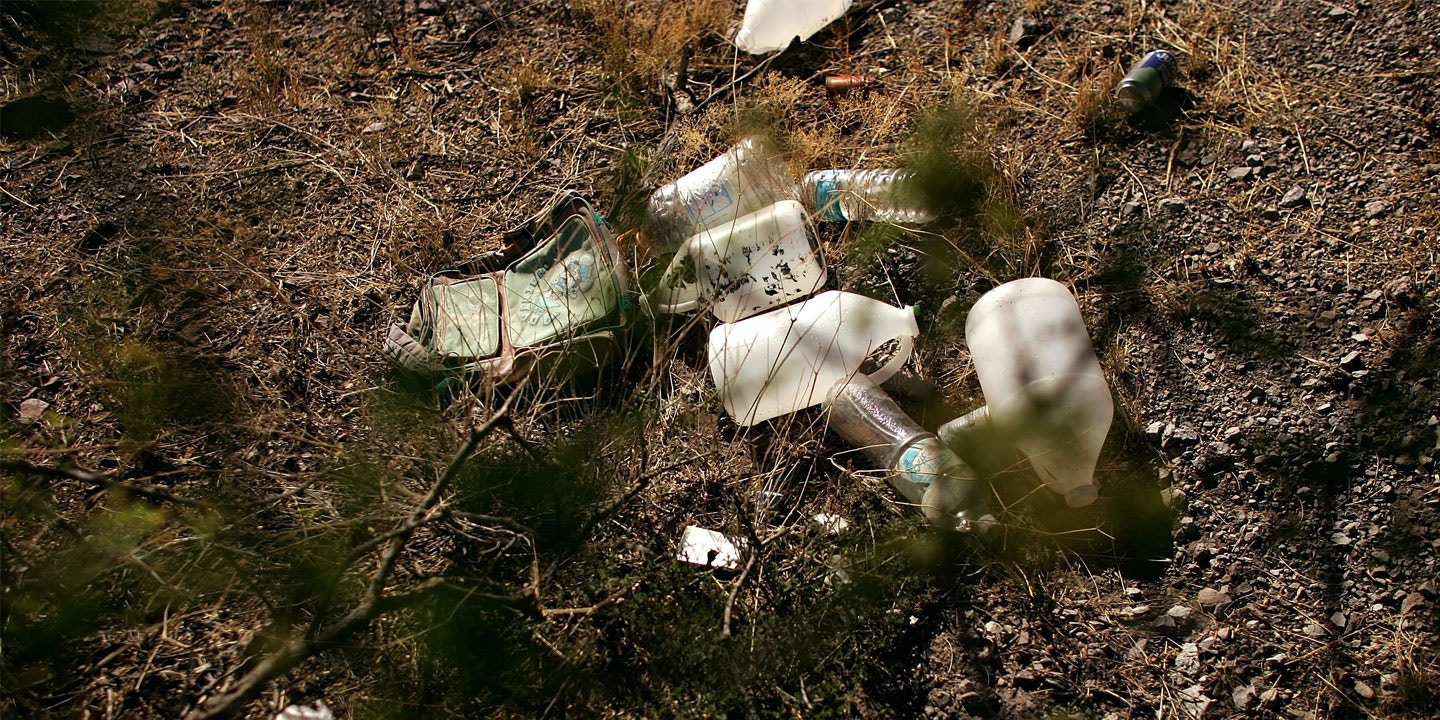 A new report says that humanitarian groups working along the U.S. border with Mexico have documented the systematic destruction of thousands of jugs of water left for migrants trekking north through the desert — and that U.S. Border Patrol agents are to blame.

Published Wednesday by the Tucson-based groups No More Deaths and La Coalición de Derechos Humanos, the report claims that from 2012 to 2015, volunteers “found water gallons vandalized a total of 415 times during our study period, or more than twice a week on average.”

“In all, 3,586 gallons of water were vandalized during this time period,” the report said. “These actions condemn border crossers to suffering, death, and disappearance.” Kate Morgan-Olsen, abuse documentation and advocacy coordinator for No More Deaths, said that while the analysis only covered up to 2015, footage exists from 2017 of Border Patrol agents destroying and confiscating humanitarian aid supplies.

While No More Deaths and La Coalición de Derechos Humanos note that other actors populate some of the areas where migrants are known to cross — including hunters and anti-immigrant militiamen — the groups argue that their three-year analysis of mapping data, land jurisdictions, and hunting seasons supports the conclusion that the bulk of the damage recorded was done by border agents.

“It is not our claim that the U.S. Border Patrol is exclusively responsible for the vandalism of water supplies,” the report states. “However … given the scope of destruction, we conclude that the only actors with a sufficiently large and consistent presence across a sufficiently wide area of the desert, during periods when hunting is both authorized and prohibited, are agents of the U.S. Border Patrol.”

In addition to data analysis, the humanitarian groups claim to have collected “ample anecdotal evidence of U.S. Border Patrol agents destroying and confiscating humanitarian supplies, including multiple eyewitness accounts of agents pouring out or destroying water supplies and four separate occasions when this vandalism was caught on video.” The report adds that the practices it documented appear to be widespread. “The practice of destruction of and interference with aid is not the deviant behavior of a few rogue border patrol agents; it is a systemic feature of enforcement practices in the borderlands,” it said.

In an official statement provided to The Intercept, the Border Patrol said it “is committed to enforcing U.S. federal laws to secure our nation’s borders while insuring the safety and security of all individuals. We do not condone or support the destruction or tampering with humanitarian provisions. Border Patrol welcomes and encourages communication [and] cooperation with any agency [or] organization to better serve and protect those within our nation’s borders.”

Steven Passement, acting special operations supervisor in the Border Patrol’s Tucson Sector, elaborated on the steps being taken in Arizona to prevent the deaths of migrants entering the U.S. illegally, including public awareness campaigns aimed at discouraging would-be border crossers and the deployment of specially trained Border Patrol search and rescue teams. “We have over 200 EMTs trained in the Tucson sector alone,” Passement said. “We don’t want to see people die out there,” he added. Passement said he and his fellow agents acknowledge that there will always be a population willing to take the risk and cross the desert to enter the United States. “Obviously we want them to come legally, but if they’re going to come illegally, then we definitely [want] them to be at least made aware of all the dangers that are out here.”

On-the-ground law enforcement practices along the U.S. border are a critical component of the immigration policy debate currently consuming Washington. Proponents of a hard-line immigration enforcement posture often argue that the border is porous and insecure — this, despite the fact that the Department of Homeland Security said as recently as last year that it is now more difficult to cross the border and enter the country illegally than ever before. They contend that deterrence — whether it’s directing flows of migrants away from populated areas or mandating detention and swift deportation upon their capture — is essential to solving the problem and saving lives.

Critics of this view, such as No More Deaths and La Coalición de Derechos Humanos, argue that as long as motivations for migrating north exist, and meaningful changes to the country’s immigration system are absent, practices and policies that revolve overwhelmingly around deterrence and enforcement will elevate risks for those that do decide to make the perilous journey. If those practices include the destruction of water along migrant trails, the humanitarian groups add, the consequences could be deadly. According to a 2017 report in the New York Times, the more than 6,000 bodies found along the U.S. border with Mexico in the last 16 years exceeds the death tolls of the September 11 attacks and Hurricane Katrina combined — and the figure is considered a conservative reflection of the true number of deaths that have occurred along the divide between the two countries.

No More Deaths claims to have dropped off more than 31,000 gallon jugs of water from 2012 to 2015, with more than 86 percent of that water consumed. “This high level of water use underscores the urgent need for access to water in the borderlands,” Wednesday’s report notes. “The purpose of humanitarian aid is to save lives, alleviate suffering, and maintain human dignity after or during human-made crises and natural disasters. A short-term response intended as a stopgap until long-term relief is provided, No More Deaths’ provision of water sources in the desert is a matter of basic life support.”

“No More Deaths’ provision of water sources in the desert is a matter of basic life support.”

Passement, the Border Patrol agent, said he believed the agents featured in the videos published by No More Deaths, “have already been dealt with.” If further evidence of an agent destroying humanitarian supplies exists, he added, the Border Patrol would like to see it. “We want to be able to identify that agent and hold them accountable for those actions,” he said. “The Border Patrol does not condone or support those actions. I tell you what, I’d hate to be that agent if he’s caught doing those things.”

In addition to the destruction of water left for migrants, Wednesday’s report also highlights what it calls Border Patrol’s efforts to “routinely intimidate, harass, and surveil humanitarian-aid volunteers.” In June, roughly 30 well-armed Border Patrol agents surrounded and entered a No More Deaths encampment near Arivaca, Arizona, after a tense, three-day showdown, in order to arrest four undocumented migrants who were receiving medical treatment from volunteers at the location. The humanitarian group raised concerns about the surveillance practices the Border Patrol employed to track the migrants to the camp.

These “actions create an atmosphere of fear and tension in a place where injured, ill, and often deeply traumatized people come in need of medical aid and respite,” the report noted. “[M]igrants in need of medical care can be frightened away and deterred from seeking help at the camp if they believe it will result in their arrest. For them, this means continuing to walk rather than seek help, potentially under conditions of severe dehydration and untreated injuries or illnesses.”

The report is the second in a series No More Deaths and La Coalición de Derechos Humanos are publishing about Border Patrol tactics. The first, published in December, drew on scores of migrant interviews to make the case that the agency uses the border’s harsh environment as a “weapon” by directing border-crossers into the most dangerous terrain.

Passement argued the gap between his agents’ goals and those of the NGOs are not so great. “We want to work with them where we can,” he said. “We understand the ideas are different, the ideology, if you will. We have our mission, they have their views of the border, but we still can work together where it involves saving lives.” In Wednesday’s report, No More Deaths and La Coalición de Derechos Humanos strongly urged readers against accepting Border Patrol’s framing of itself as an agency with humanitarian interests at its heart. “The U.S. Border Patrol’s own enforcement strategies are responsible for the crisis of death and disappearance of border crossers; the Border Patrol cannot adequately respond to this same crisis, only exacerbate it,” the report said. “Any effort by the Border Patrol to provide humanitarian aid is merely a band-aid solution on to a crisis of its own making.”

Top photo: Empty water jugs litter the ground on a trail used by migrants entering the U.S. from Mexico, on June 16, 2006 in Pima County, Ariz.