New FBI data on assaults against Border Patrol agents shows a 22 percent drop in the number of agents injured. 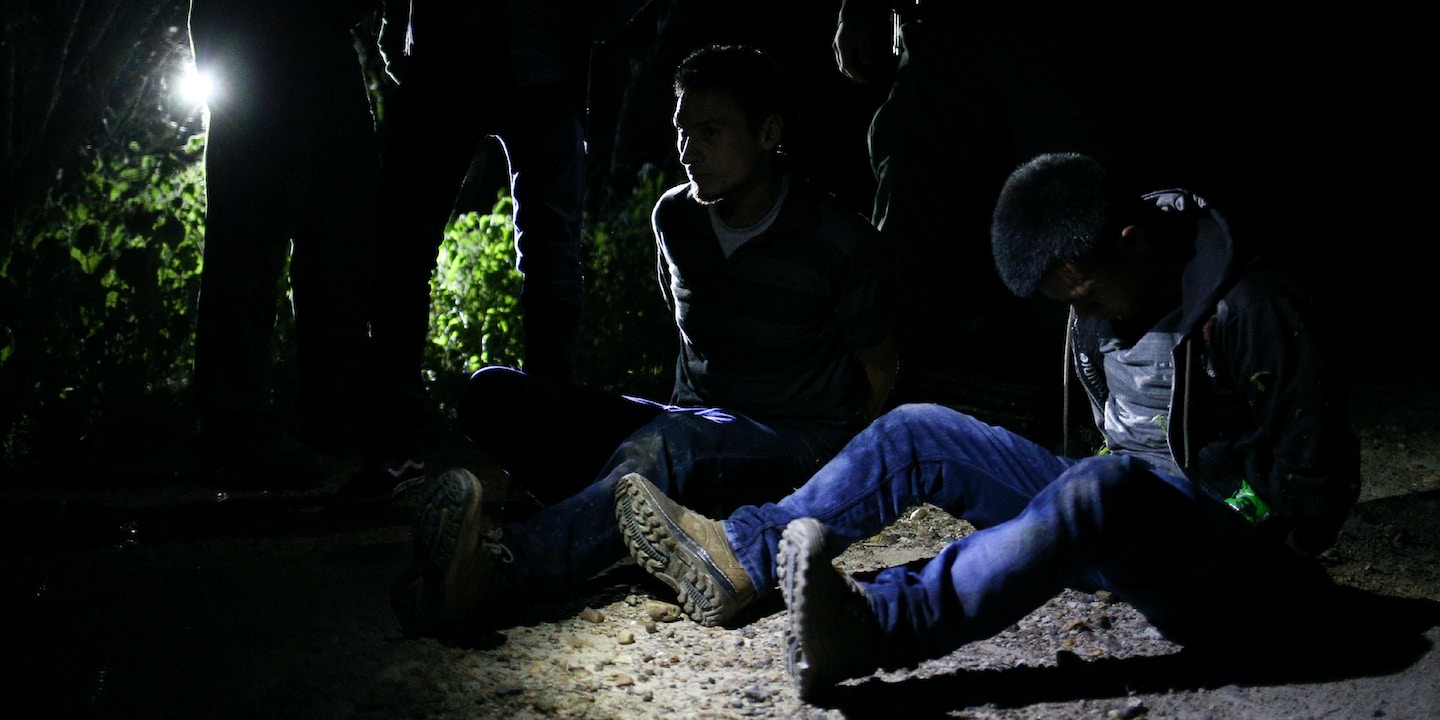 After Claudia Patricia Gómez González, a 19-year-old indigenous Guatemalan, was shot to death last week by a Border Patrol agent near Laredo, Texas, the Border Patrol issued a press release claiming that the teenager was one of a group of “illegal aliens” who were “assailants” threatening the agent with “blunt objects.” Two days later, the government’s story changed. A new press release did not mention weapons, and it described the young woman not as an “assailant,” but as a part of a group who “rushed” the officer after ignoring orders to get on the ground.

As a storm of media coverage ensued, NPR reported that the Border Patrol’s “use of force involving firearms” had more than doubled, after dropping more than 70 percent over five years. From October 2017 to March 2018, agents used guns nine times. During the same period the previous year, they used guns four times. Administration officials justified the spike, NPR said, by claiming that assaults on Border Patrol agents have increased significantly. Dominga Vicente shows a photo of her niece, Claudia Patricia Gómez González, during a press conference in Guatemala City on May 25, 2018.

But as The Intercept reported in April, U.S. Customs and Border Protection has been grossly and falsely inflating its assault statistics since 2016. CBP claimed that there were 454 assaults on agents nationwide in 2016, a 20 percent increase from the previous year. In 2017, according to CBP, there were 786 assaults, a 73 percent spike from the previous year. But The Intercept obtained data from CBP showing that the agency was using an unconventional method to count assaults. The conventional way to count attacks on agents is to simply note the number of agents assaulted in any given incident. But CBP was multiplying the number of agents assaulted by the number of assailants times the number of weapons used. This resulted in bizarrely inflated numbers, such as one incident involving six agents, in which 126 “assaults” were calculated.

Meanwhile, according to the FBI, only 397 agents were assaulted in 2016, compared with the CBP’s inflated claim to the public of 454. The Intercept attempted to obtain numbers from the FBI for 2017, to compare that data with CBP’s claim of 786 assaults, but the FBI said it would not be publishing the numbers until late May. 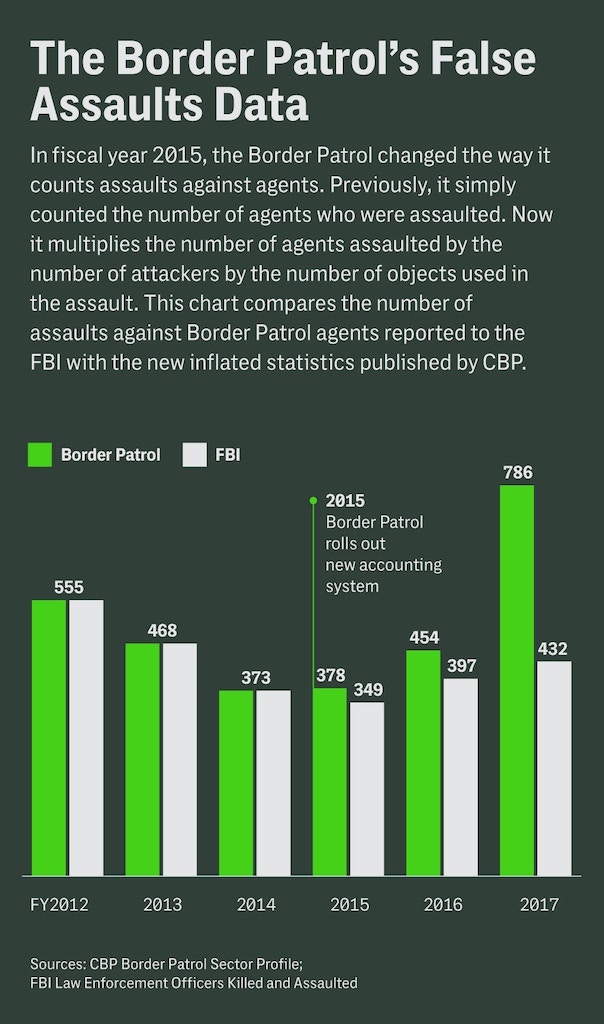 Further, in 2016 the ratio of agents actually hurt to total agents assaulted was low: about 1 in 3. In 2017, it was even lower: about 1 in 4. These statistics show how rare it is for Border Patrol agents to be assaulted, much less injured. Additional data evidencing the low number of injuries has recently become available from the U.S. Department of Labor.

In May, KRGV-Channel 5, an ABC affiliate in south Texas, published U.S. Department of Labor data on work-related injuries among Border Patrol agents. The data received extended to late 2017 and indicates that over three years, Border Patrol agents filed an average of 113 injury claims annually that were caused either by violence or “Enemy Action.” The low Labor Department number tracks the FBI’s low figure.

The Intercept examined Labor data for October and November 2017 to get an idea of what kinds of assault-related injuries agents are reporting. We counted 14 such claims. One agent reported injuries caused by crushing — a potentially serious health matter — but other injuries were minor. For instance, two agents received bruises. A few others sprained a limb. Two had “pain, swelling, and redness” in an unspecified body part that was not a joint. One victim of “Enemy Action” received a cut.

So why is the Border Patrol’s use of lethal force increasing, along with the number of assaults reported against its agents — even as injuries to those agents have gone down? Could the agents themselves be provoking confrontations with migrants? Border Patrol agents search for immigrants attempting to cross the border from Mexico near McAllen, Texas, on May 2, 2018.

Late last year, Art Del Cueto, spokesperson for the National Border Patrol Council, the agency’s federal labor union, suggested on his podcast, “The Greenline,” that the Border Patrol and federal prosecutors need to let agents employ more force against migrants. “The U.S. Attorneys need to grow a set,” his co-host Chris Cabrera said, “and say, ‘You know what? You lay a finger on our agents, you’re gonna feel it. None of this ‘What did the agent do to you?’ … You’re going to jail, and you probably got a little beat up for it.” To fellow Border Patrol agents, Cabrera added that, despite the “powers that be” attempting to restrain them, “You shouldn’t be afraid to draw your weapon. You shouldn’t be afraid to go hands-on.”

Cueto and Cabrera’s statements, taken together with the FBI and Labor Department statistics, suggest that it is Border Patrol agents, not immigrants, who are encouraging violence at the border.

A recent trial in south Texas provides a good case in point. In November, Border Patrol agent Steven Yackanin chased Eliseo Luis García, a young Guatemalan migrant, through a field near the Rio Grande. The area was only about a mile from where Claudia Patricia Gómez González would later be shot to death.

After Luis was apprehended and taken to lockup, another immigrant there noticed that Luis had blood coming out of his ear. Luis explained that he had been trying to escape and that, as a result, Yackanin and some other agents beat him up.

Yackanin claimed it was he who was assaulted by Luis, and he filled out a Department of Labor form to authorize medical care. He was diagnosed with an elbow sprain and a bruise.

Luis was charged with assault and went to trial. His public defender attorney introduced into evidence photographs of the immigrant and the Border Patrol agent, each standing next to a door with markings. The markings suggest that the Guatemalan immigrant stood about 5 feet tall and weighed perhaps 100 pounds. Yackanin was a full head taller and appeared 60 pounds heavier. The jury apparently believed Luis. He was acquitted.

Even so, the Border Patrol will likely fold the charges against Luis into its fiscal year 2018 assault statistics. Likewise for Claudia Patricia Gómez González, the young Guatemalan woman shot last week. Her death will probably be analyzed as the outcome of a purported assault against a Border Patrol agent. Gómez had a newly minted degree in accounting but could not find work in her country. She was trying get to the U.S. to find work and reunite with her fiancé. Those ambitions are defunct now, and Gomez’s final moments of life, facing a Border Patrol gun, will be most likely be crunched into scary-sounding statistics about border “violence” and “enemy action.”