A working paper from the Institute for New Economic Thinking sheds new light on the ways that economic distress motivated Trump voters in the 2016 election. It was this very week two years ago, just days before Election Day, that a sudden wave of campaign spending was unleashed in the presidential election, with Super PACs flooding the Rust Belt states with brand-new advertisements designed to stir anger at the Democratic ticket.

Much of the late-election spending centered on classic economic populist concerns: rising health care costs and the pervasive feeling that insider politicians are out to serve themselves, not the average American. The insidious, billionaire-backed push helped lock up the election for Donald Trump, who swept Michigan, Wisconsin, and Pennsylvania to win an electoral college victory.

But what really motivated voters in those states? It’s a puzzle that has roiled political observers. The question continues to cast a shadow over how the Democratic Party should reimagine itself and appeal to voters going into future elections.

The paper challenges the popular conventional wisdom embraced by many pundits that the 62.9 million Americans who cast a vote for Trump were simply one-dimensional “deplorables” — troglodytes motivated narrowly by racist, sexist, and xenophobic rhetoric and little else.

The authors of this new study — Thomas Ferguson, Benjamin Page, Jacob Rothschild, Arturo Chang, and Jie Chen — use a combination of figures from the American National Election Studies data set, along with aggregate data from congressional districts, to paint a far more complicated picture.

Trump eschewed traditional Republican orthodoxy, promising to protect Medicare and Social Security, while training his fire at the bipartisan consensus around free trade. Many voters conflate trade deals that have hollowed out the country’s manufacturing base and decades of stagnant wages with increased immigration, seeing the issues as inextricably linked. Trump spoke to this view, blaming immigrants and refugees for crime and terrorism, but also for economic hardship and national decline, a message that appeared to resonate with voters.

“Not only were several major economic factors important; our analyses make clear that the social and the economic were intertwined, both in Trump’s rhetoric and in the minds of many voters,” the study notes.

The study is careful not to claim that race and gender played no role in the election, and notes that Trump absolutely mobilized anger over identity, gender, religion, and national origin. But the effects were limited. Explicit gender and ethnic insults used by Trump appeared to help the real estate tycoon prevail largely in the primary election but may have harmed him among many swing voters in the general election.

Previous attempts to use ANES data to discern the connection between economic anxiety and Trump support have found little correlation.

Previous papers rely almost entirely on ANES’s short-term economic attitude questions, which the authors argue are “known to be error-ridden, subject to partisan and other biases.” What’s more, these questions only provide a limited range of fill-in-the-bubble answers that do not reflect the full range of sometimes conflicting views of voters.

The authors of the Institute for New Economic Thinking study incorporate open-ended responses to ANES questions, which allow voters to write out their own spontaneous responses to broad questions, rather than selecting a canned response.

Voters expressed concerns about immigration and trade in ways that alluded to a complex mixture of both social and economic anxieties. Many worried that immigrants speak foreign languages, but conveyed such anxieties in tandem with (perhaps exaggerated) concerns about competition over jobs.

The authors also found that a drop over four years in the number of business establishments in a congressional district led to substantially more votes for Trump than for Republican presidential candidate Mitt Romney in 2012, as well as voters expressing a sense of being left behind in the economic recovery tied closely to support for Trump.

For many voters, the very real impact of globalization, outsourcing, wage stagnation, increasing student loan debt, and an uneven economic recovery since 2008 financial crisis has been caused by largely invisible forces. The economic decisions that influence manufacturing, trade, or salaries are made miles away, behind closed doors and with little media coverage. The communities that are most affected are left wondering who’s to blame. Traditional politicians promise solutions but fail to deliver. That disparity means that voters feeling the short end of the economic order might easily fall prey to efforts to scapegoat much more visible trends in society, such as increasing diversity, immigration, and advances by women and minorities.

The authors suggest that economic stagnation for entire regions of the country, particularly in rural communities and once thriving manufacturing hubs, meant voters were most susceptible to the belief that America was on the “wrong track” and were likely to gravitate toward Trump. In response to open-ended questions, they expressed a desire for a tough-talking strong leader who could protect social safety net programs while taking a sledge hammer to trade and immigration.

The answers to the surveys show many individuals with a preference for Trump also asserted that there is no major difference between the parties, that health costs are too high, that moneyed interests control the political system, that increased imports into the country have destroyed local jobs, critiques that are often associated with left-wing economic concerns.

Voters rarely fit into neat ideological or moral boxes. A survey conducted by Reuters during the 2016 election showed that as many as a third of Hillary Clinton’s voters viewed African Americans as “more ‘criminal’ than whites” and “more ‘violent’ than whites,” despite the candidate stressing anti-racist principles on the stump. 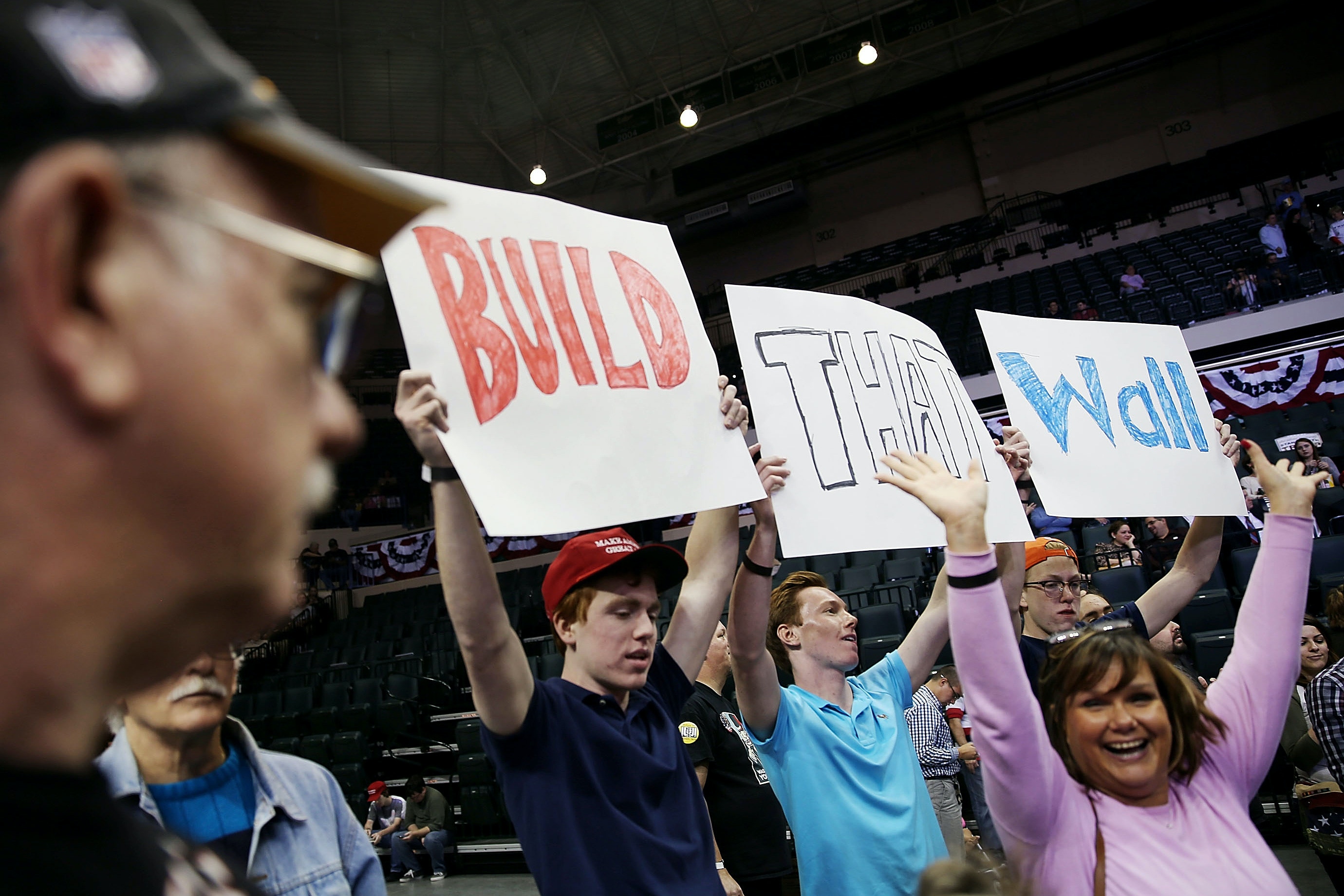 People wait for the start of a campaign rally for then-Republican presidential candidate Donald Trump at the University of South Florida Sun Dome on Feb. 12, 2016, in Tampa, Fla.

The Mob and Capital

The study repeatedly cites political theorist Hannah Arendt’s “alliance between the mob and capital,” the idea that powerful elites exploit widespread economic discontent and channel anger away from economic reform and toward social scapegoats.

Trump harnessed economic distress to blame minorities and immigrants for the nation’s woes. But he was certainly not the only billionaire using this strategy. The Koch brothers and other major donors have long channeled anger about the economy at religious and ethnic minorities. The small set of Super PACs and dark money groups that funded the late-election surge in pro-Trump advertising, along with the media conglomerates that gave Trump promotional coverage worth billions of dollars during the election, also certainly fit the mould of elite influence over the election.  The “alliance between mob and capital,” the authors write, may be at the heart of Trump’s election victory.

The open-ended ANES survey results also show the wide and pervasive perception that Clinton was “corrupt.” In contrast to Clinton, Trump certainly attempted to position himself as an outsider to the political system, a business leader who could forge deals that no normal politician could. The authors caution that such an election, with two highly unpopular candidates and many distinctive personal traits, may not offer the ideal scenario for testing questions about the roots of populism.

But the election does offer some clues. Trump’s xenophobic rhetoric was uniquely combined with a rejection of the business-centric consensus on trade and immigration. Virtually every major Republican, including all of the presidential candidates, had made assurances to cut social spending. Trump stood apart by offering a particular right-wing blend of populism and economic promises once associated with the Democratic Party. His brash rhetoric and willingness to ostracize minorities was part and parcel of his style of populism, which blended demagoguery about perceived outsiders with anger over inequality and lopsided economic policy.

The research paper, however, notes that future Democratic candidates should take heed that economic distress still motivates large swaths of the American electorate.

“Fundamentally, these guys [the Democrats] lost votes because the voters could not tell the difference between the two parties, they lost votes because people wanted relief from imports, they didn’t want globalization,” said Ferguson, one of the authors and the Emeritus Professor of Political Science at the University of Massachusetts Boston, in an interview with The Intercept.

But the Trump playbook in many ways echoes other breakout underdog candidates.

In 2008, Obama campaigned aggressively against free trade agreements and outsourcing, mocking Clinton as “a cheerleader for NAFTA for more than a decade.” Obama established himself as a political outsider, deriding Clinton for taking “more money from lobbyists than any other candidate, Democratic or Republican.” Obama as a candidate managed to avoid any of the racism or sexism of the Trump campaign, while similarly positioning himself as an outsider uniquely situated to give voice to the rage against the political and economic establishment. That year, Obama went on to win states long viewed as ruby red, such as Indiana and North Carolina, along with every Rust Belt state.

The same could be said about Sen. Bernie Sanders, I-Vt., a relatively obscure candidate with little political resources and facing a virtual blackout in broadcast media coverage, who catapulted ahead of Clinton in several states during the 2016 Democratic primary, by voicing concerns about economic anxiety over trade, health care, corruption and low wages.

“Lots of people feel completely left out from the recovery. There’s a dual economy. People feel squeezed from the middle class, they don’t know how they can send their kids to school,” Ferguson said. “There were a lot of poor people who should have voted Democratic but switched and we distinguish those groups in our study.”