Cracks in the Dam

Before the 2010 Supreme Court decision known as Citizens United, all money spent in federal elections urging the election or defeat of a candidate had to originate from identifiable human beings.

There were also strict limits on the amount any one human being could contribute to any particular campaign. And there were public disclosure requirements for donations over $200.

For example, Microsoft long ago established a PAC. But it could only solicit donations from individuals connected with Microsoft — e.g., executives and stockholders — and these individuals could only contribute to the PAC in amounts limited by law. The PAC doled out the money it collected from these individuals, but it couldn’t use any of the tens of billions of dollars in cash in Microsoft’s corporate treasury to make political contributions or expenditures. 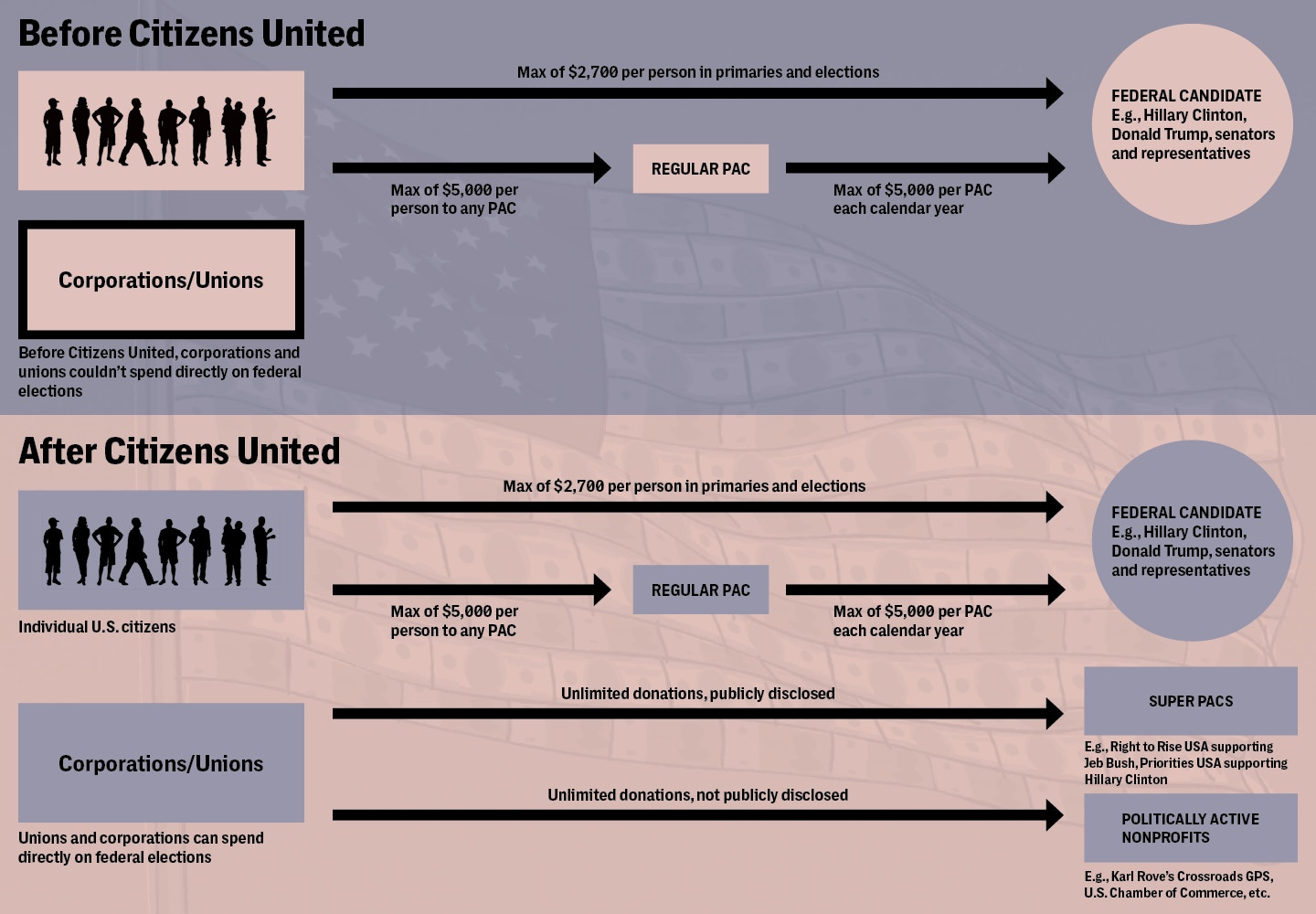 Then Citizens United struck down the prohibition on corporations spending their own money on “independent expenditures.” Corporations had free-speech rights, the court decided, and money was tantamount to speech, so corporations had the right to spend unlimited money espousing their political views. Several months later, a lower court decision clarified that a new kind of political action committee — one that only made “independent expenditures” — could collect and spend unlimited amounts of money to that end.

This was the birth of Super PACs.

The sole, weak legal restrictions that remain revolve around the definition of “independent expenditures.” Technically, they are not to be used for spending that is coordinated directly with campaigns — although that restriction, in 2016, has been blatantly violated.

Karl Sandstrom, a former FEC commissioner, explained the situation this way several years ago: “Prior to Citizens United, all federal election money could be traced back to an individual who expended it or contributed to a political committee. Once you enable artificial entities to contribute, money is no longer traceable back to identifiable individuals.”

One foreseeable effect of this was that the question of whether a campaign contributor was foreign or not went from a yes-or-no question to something altogether hazier, where even experts in campaign finance law can’t say for certain whether the government has grounds to sanction the donor.

This would matter less if the Federal Election Commission, the body charged with overseeing campaign finance law, were a well-resourced, ferocious watchdog, developing rules for such things and enforcing them. But it’s exactly the opposite, with inaction built into its structure by Congress: There are six commissioners, but no more than three can be members of the same party. These days, with the Republican commissioners adamantly opposed to enforcing even existing laws, crucial votes often tie 3-3. The commission has a difficult time just deciding to open inquiries into potential violations; it conducted 36 investigations in 2005, but only four in 2013.

One recent Republican commissioner — Don McGahn, now the chief lawyer for Donald Trump’s presidential campaign — even proposed that the FEC’s investigative staff should be forbidden from using Google without approval from a majority of commissioners. FEC employees have some of the lowest morale in comparable government agencies.

All in all, Citizens United opened three major potential paths for foreign money to flow into the U.S. political process:

The Intercept has discovered that American Pacific International Capital, a company incorporated in California but owned and controlled by Gordon Tang and Huaidan Chen, a married couple who are Chinese nationals, made donations totaling $1.3 million to the Jeb Bush Super PAC Right to Rise USA.

APIC is actually an example of a corporation whose ownership was comparatively easy to uncover. It is a real company that does actual business in the U.S., and Tang and Chen also control a publicly traded Singapore corporation whose filings disclose that APIC belongs to them.

By contrast, the 2016 election has seen a surge of contributions to Super PACs by so-called ghost corporations, which appear to exist solely to make those donations and whose ownership is unknown. Whether any of these corporations are ultimately owned by foreign nationals is likewise unknown.

Don’t expect the FEC to find out where the money came from: It recently deadlocked on a vote simply to open an investigation into several million-dollar donations by corporate entities four years ago to Restore Our Future, a Super PAC supporting Mitt Romney. (The treasurer of Restore Our Future was Charlie Spies, a prominent D.C. lawyer who went on to become treasurer of Right to Rise USA — and who, in 2015, authored a memo creating a legal roadmap for foreign nationals wishing to take advantage of Citizens United to invest in U.S. politicians.)

Almost all large publicly traded U.S. companies have some degree of foreign ownership. The most recent Treasury Department survey estimated that about $6 trillion in U.S. stock, or around one-quarter of the total market value of public U.S. corporations, is ultimately owned by foreign nationals.

The money in these corporations’ treasuries therefore belongs in part to foreign nationals. And because their money can’t plausibly be sequestered from U.S. money, any donations by such corporations are technically partially of foreign origin and should theoretically be illegal. To pick one example of many, the publicly traded Florida electricity company NextEra Energy gave $1 million to Right to Rise USA in 2015.

Americans may find this form of foreign influence less alarming than others, since foreign ownership of public U.S. companies is generally (though not always) held by many separate individuals who don’t coordinate with one another and have little influence over the companies’ behavior. But there’s no way to know, given that the FEC has not investigated this subject since the Citizens United decision. One of the Democratic commissioners, Ellen Weintraub, sponsored a recent forum at the FEC about foreign money and has suggested a possible ceiling of 20 percent foreign ownership for any corporation that wants to spend its money on electioneering. 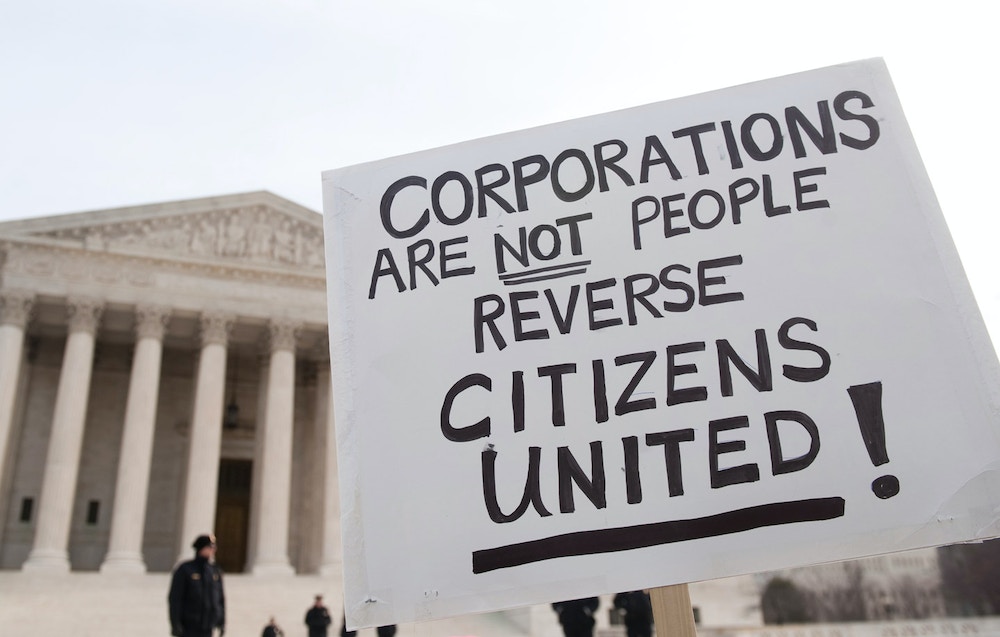 The Move to Amend coalition held a rally at the Supreme Court to “Occupy the Courts” and mark the second anniversary of the Citizens United decision, Jan. 20. 2012.

Nonprofit corporations are organized under Section 501(c) of the Internal Revenue Code. They have always been able to accept unlimited donations from individuals or corporations, but before Citizens United, could engage in little federal political activity.

The 501(c)(4) and 501(c)(6) organizations are, in fact, much more attractive than Super PACs to anyone hoping to influence elections anonymously, because, unlike Super PACs, they are not required to publicly disclose their donors. This is why contributions to politically active nonprofits are often referred to as “dark money.”

This additional layer of obfuscation makes it even less likely that money originating with foreign nationals would be noticed. For instance, if APIC had donated to Right to Rise Policy Solutions, a 501(c)(4) that was affiliated with the Right to Rise USA Super PAC, it’s unlikely The Intercept would have ever discovered its involvement in the election or ultimate ownership.

A (c)(4) like Right to Rise Policy Solutions does have to privately disclose its donors to the Internal Revenue Service on its tax return, but the IRS is perhaps even more hobbled than the FEC and would be extremely unlikely to notice or investigate possible foreign national involvement.

Want an example? Consider, for instance, that the American Petroleum Institute is partially financed by the U.S. subsidiary of Aramco, the state-owned Saudi oil company. In the 2010 midterm elections, API was one of the funders behind attack ads that helped the Republican Party take back the House of Representatives from the Democrats and stop most of Obama’s plans in their tracks.

Similarly, the American Chemistry Council, partially funded by U.S. subsidiaries of Saudi, Japanese, and Belgian corporations, also spent hundreds of thousands of dollars that year to elect its favored politicians. The U.S. Chamber of Commerce, the largest undisclosed outside spending group in federal elections, which has already spent over $16 million on congressional elections this year, has acknowledged that it receives foreign money. (API and Aramco declined in 2012 to comment on their midterm activities. The Chamber of Commerce issued a statement stating it has an internal system in place to prevent the foreign money it raises from financing political activity.)

In theory, 501(c)(4)s and 501(c)(6)s have to keep any foreign money segregated and only spend funds from American donors on U.S. elections. In reality, the public has no idea whether or how they do this, since they are not required to disclose it. And since money is fungible, any foreign donations they use for operating expenses leave more domestic contributions to spend on attack ads.