After Last Week, There’s No Hope That the Media Will Ever Abandon False Equivalencies With the Far Right

“You guys do it, too,” NBC’s Chuck Todd told a Democratic representative, referring to anti-Semitic incitement — personifying a media false equivalence. 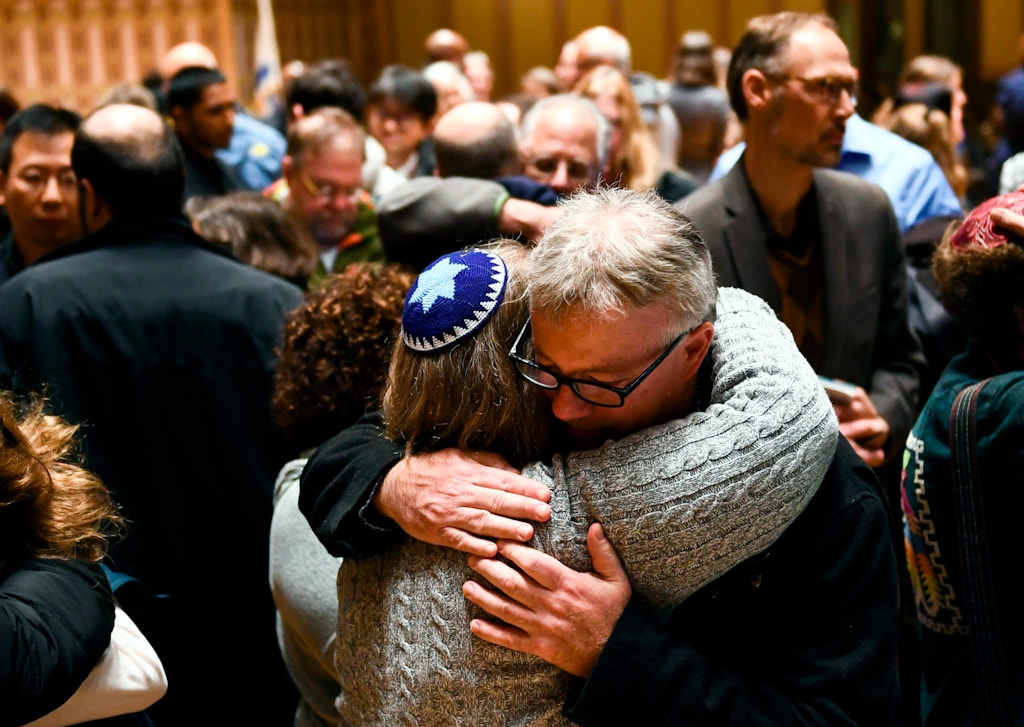 People hug after a vigil in Pittsburgh for the victims of the previous day’s shooting at the Tree of Life Synagogue, on Oct. 28, 2018.

After an intolerable week of white supremacist massacres and attempted massacres, there is no hope that the American media will stop drawing false equivalencies between racism and fascism, on the one hand, and those who oppose it, on the other.

Last week, I naively thought that the time might finally have come when there would be no room for false equivalence or equivocation from major media platforms. Consider this brief period of history: A neo-Nazi murdered 11 Jewish people in a Pittsburgh synagogue; another white supremacist in Kentucky shot dead two black people after attempting to attack a black church; and a supporter of President Donald Trump sent out 14 mail bombs. Faced with the task of reflecting on a historic week of racist, anti-Semitic, right-wing violence, however, liberal and centrist media outlets have continued with, at best, fangless and, at worst, equivocal responses to the rise of fascism.

Faced with the task of reflecting on a historic week of violence, liberal and centrist media outlets have continued with, at best, fangless and, at worst, equivocal responses to the rise of fascism.

The response from the New York Times editorial board last weekend offers a case study in false equivalencies and platitudes under the veneer of anti-racism. The board went as far as noting that “hate appears to be on the rise,” in an op-ed which cited statistics showing that anti-Semitic and racist hate not only appears to be but, in fact, is on the rise. The board’s main solution was to call for “more good speech, from more good people.” It was a riff on a quote, also used in the editorial, from none other than Facebook honcho Mark Zuckerberg, who invoked the need for “good speech” as a response to his website’s failure to police Holocaust denial. The idea that “good speech” is a sufficient weapon against rising fascism — and the desires and collectivities that fuel it — is a misplaced liberal fantasy.

More relevant to note now is that even after a most deadly week of racist violence, the New York Times editorial board could not commit to racists being the problem. Instead, the editors veered once again into a pitiful both-siderism. “Mr. Trump is also setting a low, coarsening standard for how Americans should speak to and about one another. He has urged his supporters to think of his critics as traitors and enemies,” writes the board. “Some Democratic leaders appear to be concluding that they will be suckers if they don’t adopt similar smashmouth tactics.” The New York Times fails to note that deploying “smashmouth tactics” and framing opponents as “enemies” has a different moral valence when those opponents are white supremacists and neo-Nazis. I don’t mean to suggest that this was an omission: The “paper of record” has, by now, made it clear that drawing false equivalencies when it comes to “bad speech” is among its commitments. 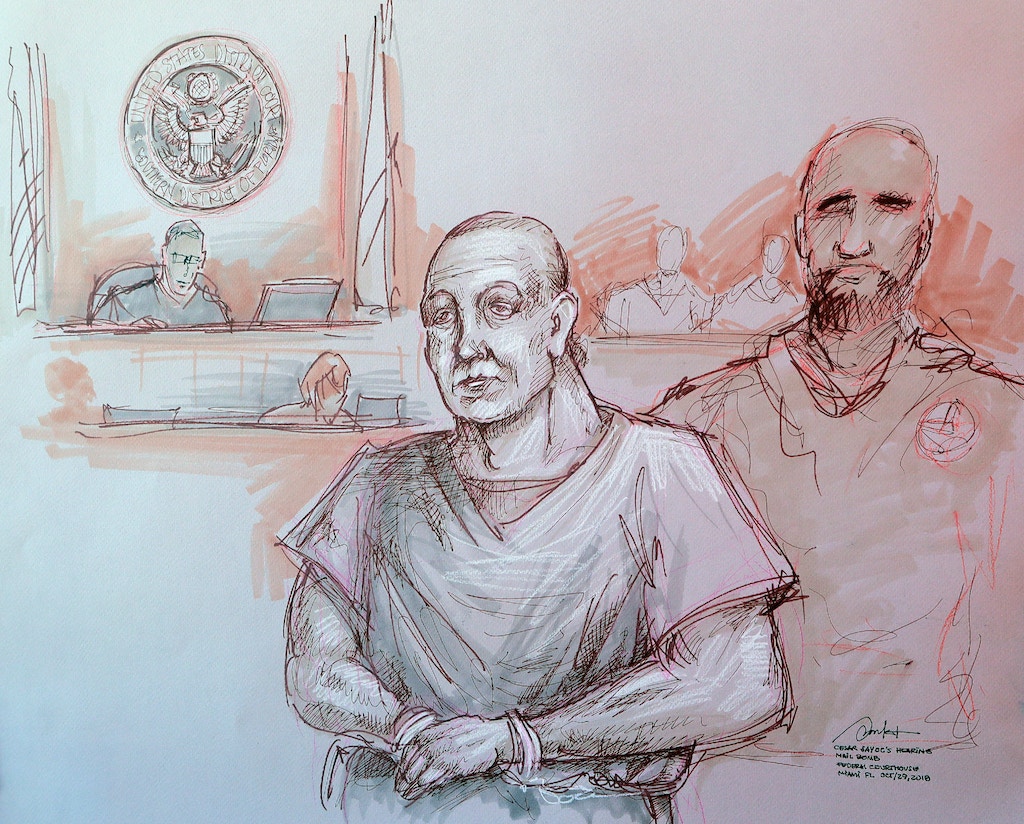 In this courtroom sketch, Cesar Sayoc, left, appears in federal court in Miami, on Oct. 29, 2018.

NBC, for its part, was worse. We can presume the network was supposed to be one of the pipe bomber’s targets — a package intended for John Brennan, an MSNBC contributor, was mistakenly addressed to CNN — and yet the reality of the right-wing violence still did not hit home. Instead, NBC devoted its prime Sunday morning real estate to avoiding outright condemnation of Trump-emboldened white supremacists.

On “Meet The Press,” host Chuck Todd questioned National Republican Congressional Committee Chair Rep. Steve Stivers, R-Ohio, about an anti-Semitic GOP ad featuring George Soros, but then immediately turned to his Democratic guest, Rep. Ben Ray Luján, D-N.M., and said, “You guys do it, too, with the Koch brothers, I guess.”

The remark was bogus on several fronts. It needlessly undermined criticisms of the far right’s anti-Semitic conspiracy theories about Soros by equating those vile attacks with legitimate criticisms of the industrialist Koch brothers’ vast political influence. Moreover, the comment also ignored that Trump — not a Democrat — used the anti-Semitic moniker “globalist” to describe Charles Koch this year (despite Koch not even being Jewish).

Todd’s point has its origins in a GOP talking point: Republicans, not infrequently, claim that their campaign against Soros is no different from liberal criticisms of the Kochs’ influence. In other words, Todd reacted to the worst anti-Semitic attack in American history by wholesale swallowing the sort of right-wing talking points that would seek to mainstream lesser versions of these bigoted ideologies.

The following segment on the show was no better. Todd featured conservative pundit Erick Erickson. Last week, Erickson tweeted a conspiracy theory about the refugee caravan’s purpose: “It is not a coincidence that this caravan to the south of us is happening 2 weeks before our federal elections.” And yet he used his platform on “Meet The Press” to claim, without being challenged, that he is against conspiracy theories.

Meanwhile, CBS’s “Face the Nation” invited Sen. James Lankford, R-Okla., to appear on Sunday. He was among the politicians to claim that the refugee caravan heading to the Southern border had been infiltrated by people from the “Middle East” — something Trump had said, without evidence, to imply terrorist involvement. With Lankford on his show, host John Dickerson didn’t even mention it.

It didn’t have to be this way. An obvious time for cable news broadcasters and their colleagues to start putting an end to false equivalencies might have been after last year’s events in Charlottesville, Virginia, where neo-Nazis marched and eventually murdered Heather Heyer and beat DeAndre Harris with metal poles. Rather than outright rejecting Trump’s vile epitomization of both-siderism — “very fine people on both sides” — the liberal, centrist, and conservative media doubled down on it. There’s a statistic that cannot be cited enough: In the month following the 2017 Charlottesville “Unite the Right” rally, six of the most prominent American newspapers ran 28 opinion pieces condemning anti-fascist action, according to FAIR, but only 27 condemning neo-Nazis and white supremacists — including columns on Trump’s failure to disavow them.

Instead of a moment of reckoning, Charlottesville stands as the onset of a pattern of both-siderism.

Instead of a moment of reckoning, Charlottesville stands as the onset of a pattern of both-siderism. Editorial boards and network producers did not put an end to false equivalencies after any of the 18 deaths caused by white supremacist violence in 2017 — which constituted 59 percent of all extremism-related fatalities last year, according to the Anti-Defamation League.

Instead, rivers of ink have been spilled condemning the disruption of Republican dinner plans and neo-Nazi speeches; according to FAIR, the New York Times alone featured 21 columns and articles this year expressing concern for right-wing speech on campus. Neo-Nazis have been the stuff of sympathetic profiles. For the past two years, under Trump, mainstream media institutions have roundly failed to address the fact that no ideology poses a greater threat to the lives and well-being of people living in this country than white supremacy, which is supported and emboldened by the current president and government.

The time to put an end to false equivalencies has long passed, and if last week’s horrors did not constitute a turning point on that front, I doubt anything will. The mainstream of American journalism is so dedicated to a blind and bereft ideology that it would sooner give rising fascism a pass than forgo organizing the world into debates with two sides.