A Republican congressperson with a long history of white supremacist views erupted in anger when asked about his anti-immigrant ideology. 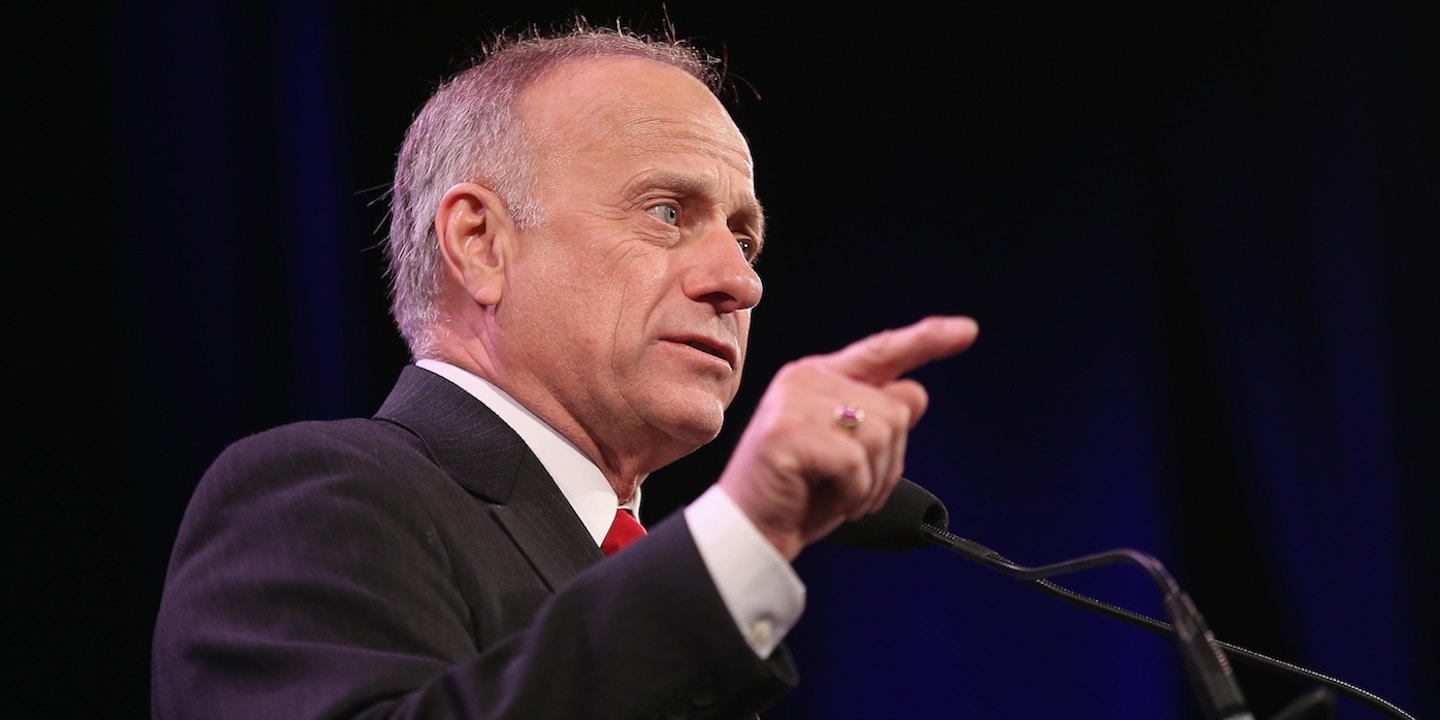 Rep. Steve King, an Iowa Republican with a long history of white supremacist views, erupted in anger on Thursday when asked by a constituent to explain how his anti-immigrant ideology differed from the beliefs of the white supremacist terrorist who killed 11 people at a synagogue in Pittsburgh last week.

The heated exchange, which was captured on video from multiple angles, began with Kaleb Van Fosson, an Iowa State University student who lives in King’s district, asking his representative about the apparent similarity between his own claim that “We can’t restore our civilization with somebody else’s babies” and the Pittsburgh shooter’s anti-immigrant statements.

Steve King blows up at questioner who pressed him on the Pittsburgh massacre #IA04 pic.twitter.com/7sFQyY9fOW

“The terrorist who committed this crime, he was quoted as saying, ‘They bring invaders in that kill our people. I can’t sit back and watch our people get slaughtered,’” Van Fosson said. “You, Steve King, have been quoted as saying, ‘We can’t restore our civilization with other peoples babies.’ You and the shooter both share an ideology that is fundamentally anti-immigration.”

Before he could finish his question, the student was interrupted by King. “No, don’t you do that. Do not associate me with that shooter,” King said. “I knew you were an ambusher when you walked in the room, but there is no basis for that, and you get no question, and you get no answer.”

“I’m not an ambusher,” Van Fosson replied. “I was about to ask you, what distinguishes your ideology —” he said, before King cut in again, saying, “No, you’re done. We don’t play these games here in Iowa. No, you’re done. You crossed the line. It’s not tolerable to accuse me to be associated with a guy that shot 11 people in Pittsburgh. I am a person who has stood with Israel from the beginning — the length of that nation is the length of my life — and I have been with them all along, and I will not answer your question, and I will not listen to another word from you.”

The moderator then cut off the exchange, saying, “I think he’s given his answer. His answer is his answer.”

“But do you identify as a white supremacist?” Van Fosson asked.

“Then why did you meet with a white supremacist organization in Austria?” his constituent asked.

“You’re done!” King barked. “I want to ask whoever is guarding this door to lead this man out of the room,” the congressperson said, despite the fact that the event was open to anyone who, like Van Fosson, had registered and paid $15 to attend.

Van Fosson, an Iowa State junior who studies political science, then departed to join a group of about 70 protesters outside the event from Iowa Citizens for Community Improvement, a group that had asked for King to be barred from the Greater Des Moines Partnership forum because of his clearly articulated white supremacist views.

“I’m not working for any campaign,” Van Fosson said in an interview after the event. “I’m a voter who lives in his district, and I think it’s important for people to talk to their representative.” The student added that this was the second time he had attempted to ask King about his anti-immigrant views. Last week, he said, he attended an event in rural Iowa and “walked up to him very politely” afterward, only to be forced away by the candidate’s son and two other people. He was perhaps blocked on that occasion from asking the congressperson any questions, Van Fosson speculated, because he didn’t look like he was a resident of the rural area and because he was accompanied by a person of color.

Van Fosson also noted the irony of King’s intemperate response to his calmly articulated question during an event intended to foster “civility” in public debates. “As part of the Show Some Respect campaign,” the business group explained ahead of the forum, “The Partnership encourages Iowans to be civil in their discussions on issues and in support of their candidates.”

King holds what is usually considered an extremely safe Republican seat, although one recent poll showed his Democratic challenger, J.D. Scholten, to be just a point behind.

King, who holds an outsized influence on national politics because of his prominence in the state where presidential nominating campaigns begin, has faced new scrutiny since he met with members of a nationalist Austrian party founded by former members of the Nazi SS. The congressperson also told a news site associated with the party that “Western civilization is on the decline,” and he has a well-established track record of racist views. In 2016, he stunned a television panel by claiming, during a live broadcast, that there was nothing wrong with the lack of diversity at the Republican National Convention since, he said, members of nonwhite races had contributed relatively little to human civilization.

“This ‘old white people’ business does get a little tired,” King said at the time. “I’d ask you to go back through history and figure out, where are these contributions that have been made by these other categories of people that you’re talking about? Where did any other subgroup of people contribute more to civilization?”

When he was asked by the host Chris Hayes if he was really arguing that other races had contributed less “than white people,” King said yes, he meant less “than Western civilization itself, that’s rooted in Western Europe, Eastern Europe, and the United States of America — and every place where the footprint of Christianity settled the world.” In his interview with the far-right Austrian website, King proudly recounted the 2016 exchange, saying, “The video of this went viral because I defended Western civilization on national television.”

At another point in the forum in Des Moines on Thursday, King was confronted by an audience member who asked how he could support forcing immigrants to speak English when his own German-speaking grandmother had lived in the United States for more than three decades without learning the language.

In addition to his trip to Austria, King has been criticized by his own party for his recent endorsement of Faith Goldy, a candidate for Toronto mayor who recited a white supremacist oath and was featured in a neo-Nazi podcast around the time of the racist riots in Charlottesville.

On Thursday, King attacked the Washington Post for reporting on his trip to Austria and offered a defense of Austria’s Freedom Party, saying that even though it was founded by a former member of the Nazi SS, that individual had been quickly replaced by someone else. The party’s second leader, King neglected to explain, was also a former Nazi.

For his part, King seemed proud of his conduct at the candidate forum, sharing video on social networks of himself calling for his constituent to be ejected and asserting that his support for Israel made it impossible for him to be an extreme nationalist who would discriminate against people based on their race, ethnicity, or religion.

Leftist Media Lies have reached Peak Insanity and compared me to the evil Pittsburgh murderer of 11 Jews! Here is my reaction. https://t.co/ocOlnS0Zbg