On Wednesday, the Federal Reserve proposed a major rollback of bank liquidity requirements imposed on Wall Street after the 2008 financial crisis. 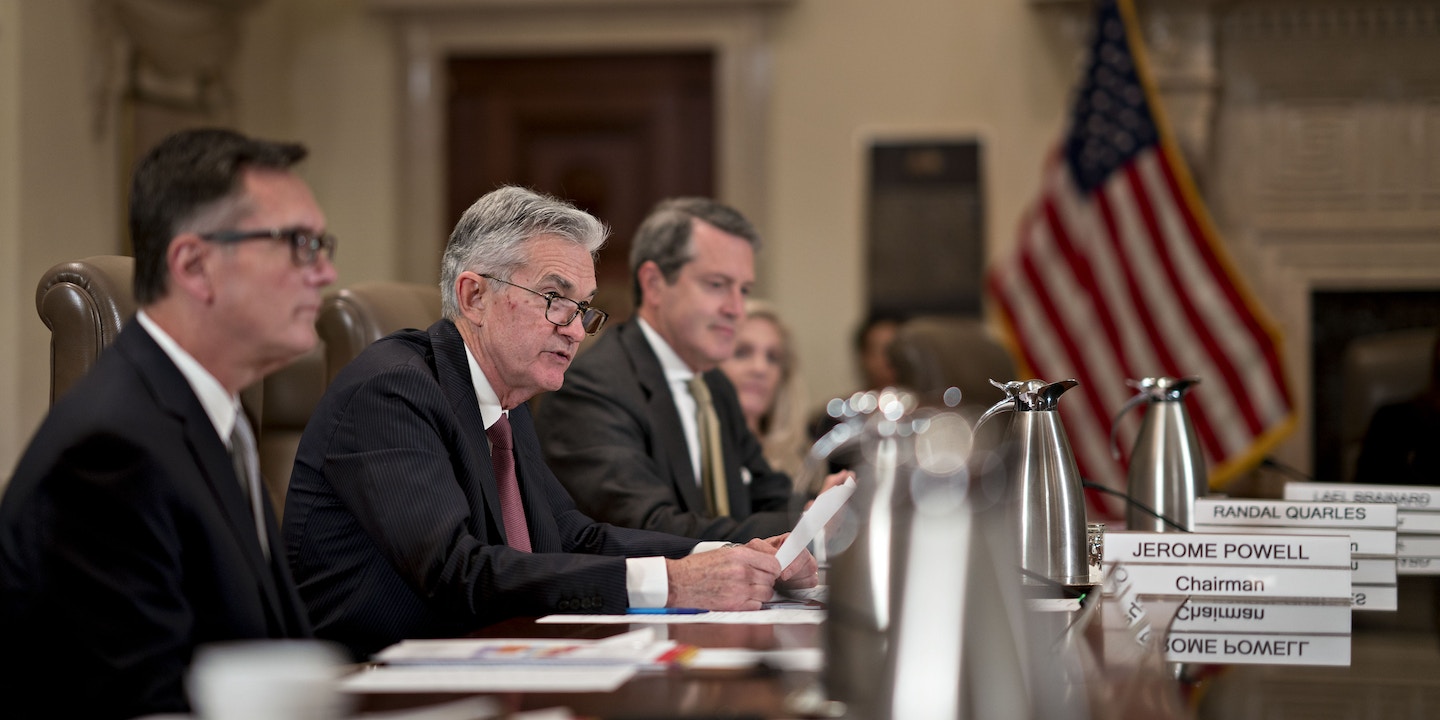 On the campaign trail, Donald Trump frequently pledged to “dismantle” the Dodd-Frank financial reforms passed in the wake of the 2008 financial crisis. On Wednesday, with the Federal Reserve’s release of a proposal to roll back capital and liquidity requirements, he caught his big whale.

Those requirements, imposed by the Dodd-Frank Act, were put in place to ensure that critical financial institutions could weather economic storms. The liquidity ratio was only finalized in September 2014. And yet, just four years later, on October 31, the Federal Reserve announced proposed changes that would reduce liquidity requirements by almost a third for banks such as Capital One and Charles Schwab with assets of $250 billion to $700 billion. Smaller banks would have even fewer restrictions.

In the lone dissent on the Fed’s four-member board, Lael Brainard said she could not support the proposal, which, among other things, would “weaken the buffers that are core to the resilience of our system.”

The proposal was one of a series of dramatic changes pushed forward by the Economic Growth, Regulatory Relief, and Consumer Protection Act, which Congress passed in May with bipartisan support. That bill also weakened the Volcker Rule, implemented in 2015 to limit banks’ ability to make speculative proprietary investments — another centerpiece of Dodd-Frank designed to rein in potentially fatal risk-taking by big banks.

The bill exempted smaller banks from compliance with Volcker. The same month it passed, the Fed proposed sweeping changes to further weaken Volcker, shifting the burden of proof on compliance on each trade from the banks to oversight agencies.

Thanks, but We Want More

Both Fed proposals — on liquidity and Volcker — were promoted as an effort to reduce compliance costs. Jerome H. Powell, chair of the Fed, said of the Volcker proposal that it simply offered “a more streamlined set of requirements” for banks. Both proposals were widely seen as a victory for Wall Street. “Big Banks to Get a Break From Limits on Risky Trading,” read one New York Times headline about the Volcker proposal. Sen. Elizabeth Warren described it as a favor from Wall Street’s “banker buddies turned regulators.”

Public comments on the liquidity rule have just opened, but comments on the Fed’s Volcker Rule reform closed on October 17. A look through those public comments shows that the banks weren’t sounding as happy as might be expected, given that the country’s largest banks have lobbied for Volcker reform. (The comments are now in the hands of the five regulatory agencies involved in the rule: the Federal Reserve Board, the Office of the Comptroller of the Currency, the Federal Deposit Insurance Corporation, the Securities and Exchange Commission, and the Commodity Futures Trading Commission.)

A review of the comments shows the banks commending the Fed for relaxing the rules. But it also shows many bankers carping that regulators were enlarging the universe of securities that would be considered when determining if they were in compliance; establishing new demands that bank CEOs attest each year that they have the proper rules in place; and, all in all, asking for changes that would risk increasing industry oversight costs.

Thanks for the concessions, they said in so many words. But we want more.

The Volcker Rule, as it stands, makes a distinction between the trading a bank does on behalf of customers, which is allowed, and the trading it does for its own gain, which is not. The rule limits the ability of banks to invest in so-called covered funds, unless it’s done to hedge their positions or on behalf of customers. The idea is that American taxpayers should not be on the hook for blunders that banks make in their own risky trading.

The Volcker Rule would make a financial crisis much less likely, according to Marcus Stanley, policy director at Americans for Financial Reform. But even the current muscular rule hasn’t yet been aggressively enforced. In the three years since Volcker took effect, only Deutsche Bank has been penalized for a violation, and that was a case in which the bank self-reported that its compliance program was inadequate — not one in which regulators took the initiative.

Now the rule itself stands to be weakened. Kara Stein, a Democratic SEC commissioner, said in a statement that the proposed rewrite “cleverly and carefully euthanizes” Volcker. The proposal appears to be aimed at “making it easier for banks to take on greater leverage and risk,” she said, and relies on “a ‘just trust me’ paradigm.”

The Fed proposal released in May offers new compliance exemptions that include trades that are made in error. Bartlett Naylor, financial policy advocate at Public Citizen, reminded regulators in his letter that it was trades by Nick Leeson in Barings Bank’s “Error Account 88888” — created by Leeson specifically to hide losses — that “collapsed the bank” in 1995.

The May proposal additionally would let some banks off the hook from performing analyses to prove that the activity in their accounts was hedging, not proprietary trading.

Throughout the decadelong brawl over Dodd-Frank and the Volcker Rule, banking industry supporters have argued that the reforms would damage market liquidity, bank earnings, job growth, and the economy. That same refrain was visible throughout the comment letters.

The Center for American Entrepreneurship claimed in its letter to regulators that the Volcker Rule already has been “undermining economic growth.” The Securities Industry and Financial Markets Association, or SIFMA, Wall Street’s lobbying arm, wrote that the rule has contributed to a “chilling effect on financial intermediation, negatively impacting liquidity and imposing significant compliance costs.”

Yet the SEC concluded in a study released just last year that the agency could find no empirical evidence to support the theory that liquidity had declined in the wake of the passage of the Dodd-Frank Act in 2010. It also pointed out that the issuing of market securities had not declined and that the private market issuance of debt and equity had increased substantially.

The Volcker Alliance, a nonpartisan public policy organization, echoed these findings in its comment letter, reminding regulators that the United States is in its second longest expansion in recorded history, bank profits are soaring, trading volume is near an all-time high, and unemployment is at its lowest in nearly 50 years. “There is no apparent justification for this proposal,” they wrote.

But a record expansion is apparently not enough for Wall Street. Among the items bankers disliked in the May proposal, a new so-called accounting prong sparked repeated complaints. That addition would help determine whether certain trades would count as short-term, causing them to be prohibited under the rule. The Committee on Capital Markets Regulation, whose members include 36 leaders from the finance, investment, business, law, accounting, and academic communities, said that transactions “that are clearly not short-term trades” will be swept into the definition of proprietary trading under the proposal. The U.S. Chamber of Commerce’s Center for Capital Markets Competitiveness wrote that the accounting prong “should be eliminated in its entirety.”

Among other requirements, the accounting prong adds a new test to determine whether trades are speculative that focuses on accounting standards. If a trading desk has less than $25 million in gross trading losses and gains over a 90-day period, regulators would simply assume that it is in compliance. Despite all the complaints, that’s a proposal with a huge hole, wrote Elise Bean, a former staffer for Sen. Carl Levin who led a Senate subcommittee on investigations into the financial crisis. A bank looking to get around that regulation could simply “establish a network of trading desks, each designed to fall below the $25 million threshold.”

Just days after the public comment deadline, Wall Street combatants began to meet with regulators in an attempt to influence the inevitable revisions to come. On October 22, four officials from SIFMA met with Elad L. Roisman, a Republican SEC commissioner, and four of his lawyers.

In private meetings with regulators in the months ahead, lobbyists are sure to be pushing to make the Fed’s proposal ever more industry friendly, including cutting back on reporting requirements and delegating banks to regulate themselves. Those approaches intentionally blind regulators from doing their jobs, wrote Dennis Kelleher, president and CEO of the nonprofit financial reform group Better Markets. “With billions of dollars on the line, it is simply wrong to go back to a ‘trust us’ model of regulation, where regulators defer to the financial industry to police itself,” he said. “Everyone knows how spectacularly unsuccessful that was before the catastrophic crash of 2008.”

This article was reported in partnership with the Investigative Fund at the Nation Institute, where Susan Antilla is a reporting fellow.