A Democratic Takeover Is Within Reach in These Eight States

With control of the governorship or state legislature, Democrats could combat assaults on voting rights, abortion access, organized labor, and gun control. On Election Day, Democrats are poised to flip state legislative chambers and governorships across the country. Statewide candidates enjoy relative obscurity in the national media, even though their positions have tremendous influence over the daily lives of millions and a direct influence on which party controls Congress for the decade to come. This year, Democrats ramped up their efforts to flip state-level seats and claw their way back into power, running more candidates than they have since 1982.

In many states, legislative chambers have the power to redraw congressional district maps, a tactic that is used to advantage the party in control. A wave of Democratic victories would let the party reverse some of the Republican gerrymandering that took place under President Barack Obama, adding potentially dozens of winnable U.S. House seats to the map. With control of a state’s government, Democrats could combat conservative assaults on voting rights, abortion access and reproductive health care, organized labor, and gun control laws.

Republicans control two-thirds of all legislative chambers in the country and hold 26 trifectas, or unified control of the state House, Senate, and governor’s seat. Democrats, meanwhile, only have eight trifectas. Under Obama, Democrats lost nearly 1,000 state seats nationwide. States like Colorado, New York, and Michigan are ripe for a full Democratic takeover. Even states like Arizona and Florida have the best chance in decades to see either of their legislative chambers go blue. Democrats are also running competitive gubernatorial races in Florida, Ohio, Michigan, Illinois, Wisconsin, Iowa, Kansas, Oklahoma, and Georgia. Nationwide, 33 states have Republican governors, while 16 have Democrats. What follows is an incomplete list of states where Democrats may soon find themselves in power.

Colorado, for example, is just two Senate seats away from achieving a Democratic trifecta. Five women in five fiercely contested districts hold the key to a state Senate majority, and Democrats only need to win four of those races. Of the five races, three of the seats are occupied by Democrats and need to be defended for the party to take control, while the other two are controlled by Republicans. The party is expected to hold the state House, and Jared Polis, the Democratic nominee for governor, has a double-digit lead in polls.

If Democrats do achieve a trifecta, they could finally pass much of the legislation that has been killed by Senate Republicans. It would also mean that for the first time in history, a majority of the state Senate caucus would be made up of women. Some of the bills Democrats are “excited to get across the finish line,” The Intercept reported last Tuesday, deal with paid family leave requirements, K-12 education investment, and affordable housing. 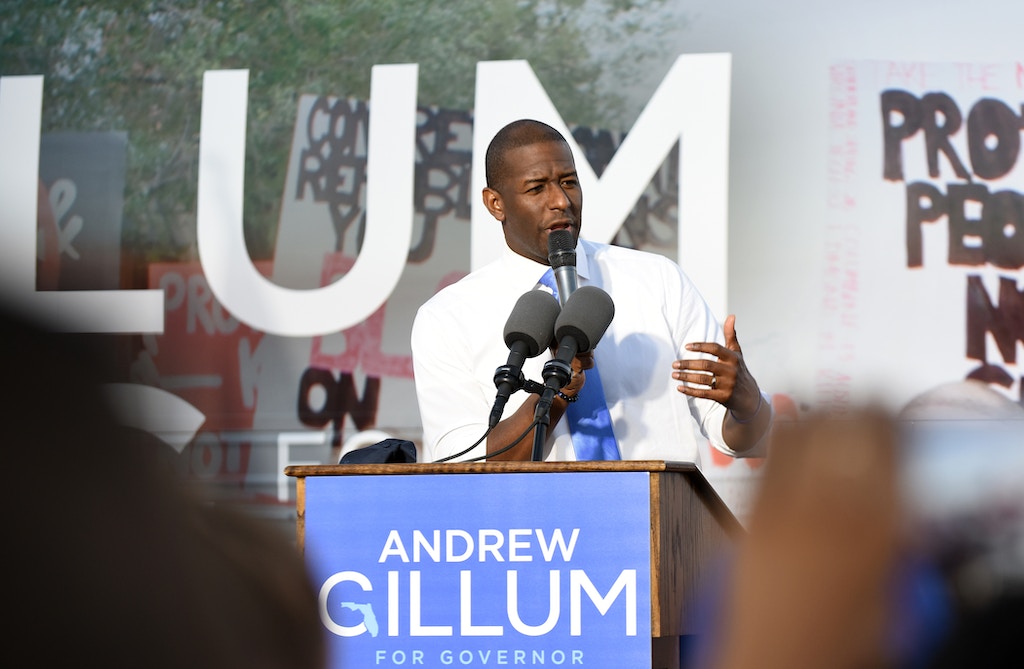 Andrew Gillum, speaks to supporters at a rally on Oct. 28, 2018 at Osceola Heritage Park in Kissimmee, Fla.

The Florida gubernatorial race, one of the most heated contests this election cycle, is rated a toss-up. Recent polls show Democratic candidate Andrew Gillum with a lead of a point or two over Republican Rep. Ron DeSantis. Gillum, if elected, would be Florida’s first black governor and the first Democrat to hold the seat in nearly 20 years. The elected governor will have the power to approve or veto the 2021 congressional map so, considering the size of Florida, this state is particularly crucial to future control of the U.S. House.

As for the state legislature, flipping either chamber would be an uphill battle. But Democrats currently have the best chance to do so in the upper chamber and are hoping to flip five seats and end the trifecta that Republicans have held for the past 20 years.

Democrat Stacey Abrams and her Republican opponent Secretary of State Brian Kemp are neck and neck in Georgia’s gubernatorial race, another one of the most closely watched races this election cycle. If elected, Abrams would be the first black woman governor in U.S. history, all while taking down one of the 26 Republican trifectas.

The legislature is expected to remain in Republican hands, but Abrams would have the power to veto or approve redrawn congressional maps, significantly influencing which party would be in power for the next decade. She could also enact Medicaid expansion, which has been a focal point of her campaign and that would cover nearly half a million more low-income residents. 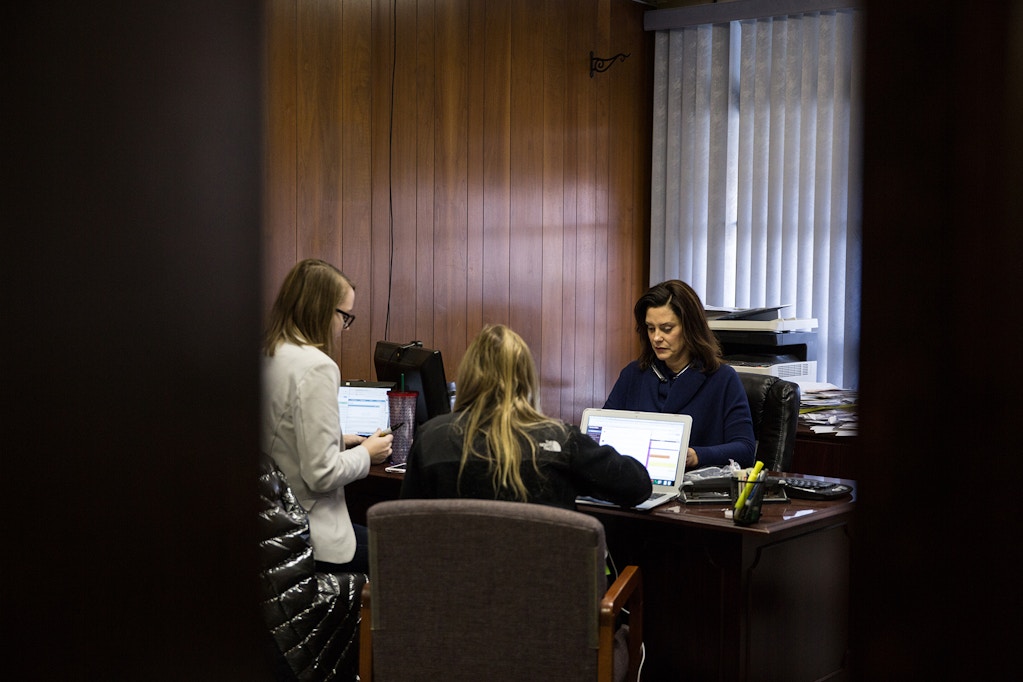 Gretchen Whitmer and her team begin call time at their location in Detroit on Dec. 19, 2017.

Recent polls show that Democrat Gretchen Whitmer still has a strong lead over Republican Bill Schuette in the governor’s race. In the state Senate, Democrats need to flip nine seats, which would give them a majority for the first time in over 25 years. The party is running women in seven of the nine targeted Senate districts, and 10 women in their top 13 targeted House races. (Women make up over 50 percent of all Michigan state House candidates.) For a majority in the lower chamber, Democrats need to flip nine seats. Not only is the Republican trifecta in the state highly vulnerable, but there’s a possibility it goes entirely blue.

Republicans hold narrow majorities in both legislative chambers. All 134 Minnesota House seats are up for election, and Democrats are targeting GOP-held suburban districts that went for Hillary Clinton in the 2016 presidential election. The direction of the upper chamber, however, will be decided by a single seat, and Democrats have only one shot at it. The only state Senate race on the ballot this year is the special election in Senate District 13. The state government has been under split-party control, but if Democratic gubernatorial nominee Tim Walz is elected, retaking either chamber of the legislature will be critical to implementing the party’s agenda.

There is a chance, however, that Minnesota ends up electing its first Republican attorney general for the first time in nearly 50 years. Democratic Rep. Keith Ellison left his safe seat in Congress to become the state’s top lawyer, but allegations of domestic abuse, which he has denied, have eroded his support. A recent Star Tribune-MPR News poll shows Republican Doug Wardlow leading Ellison by 7 percentage points. In a September poll, Ellison held a 5-point lead over his opponent.

In New Hampshire, Democrats need to flip three seats in the state Senate and 22 in the House. That may sound like a lot, but there are 400 members of the New Hampshire House. A trifecta isn’t as likely, as Republican Gov. Chris Sununu is among the most popular executives in the country and has maintained a lead over Democrat Molly Kelly for months. Still, the state is a Democratic Legislative Campaign Committee target.

A single state Senate seat keeps New York from potentially leading the rest of the country in progressive policy. There are currently 32 Democrats and 31 Republicans in the Senate, but one Democrat, Simcha Felder, caucuses with Republicans to give the GOP the majority. The race between Republican incumbent Carl Marcellino and Democrat James Gaughran in Senate District 5 is viewed as one of the top Democratic pickup opportunities. In 2016, Gaughran came within 1 percent of beating Marcellino, who hadn’t been seriously challenged until then. It’s an expensive and competitive race, but there’s hope that the high level of Democratic enthusiasm this year will translate into a victory.

If the Senate is flipped, it’s going to be up to Gov. Andrew Cuomo, who’s expected to win re-election, to ultimately decide how left the state goes. Democrats haven’t had control of the upper chamber since 2009, and the slim margin has hindered progress in areas like rent regulation, health care, immigration protections, and reform of the state’s arcane voting laws. 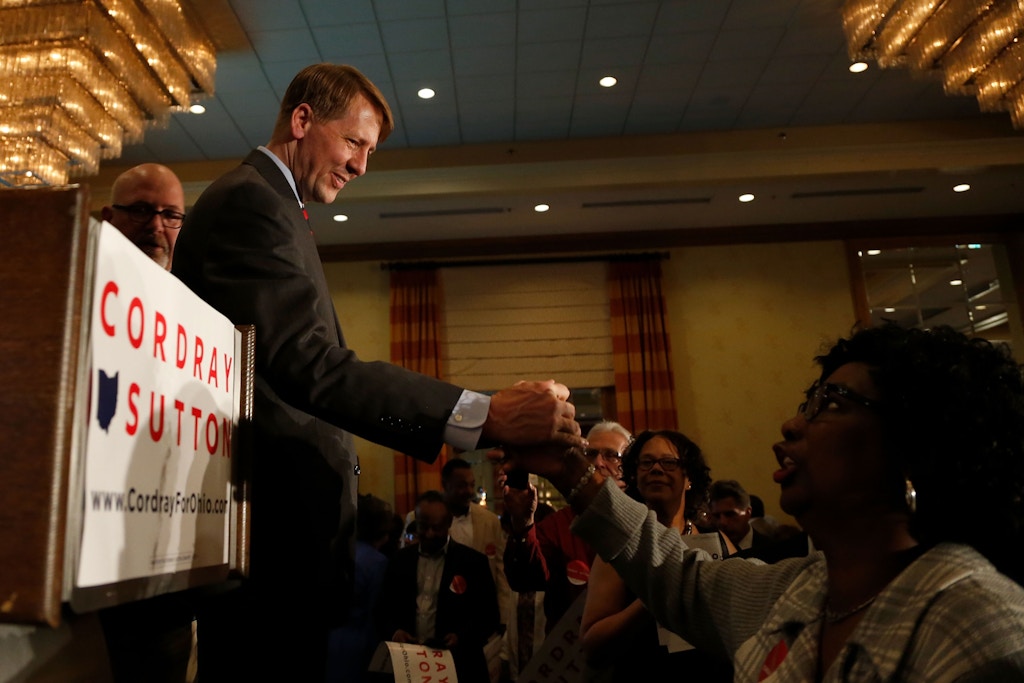 Richard Cordray shakes hands with supporters after speaking during a primary night event on May 8, 2018 in Columbus, Ohio.

Democrat Richard Cordray, who served as the first director of the Consumer Financial Protection Bureau, is running a competitive race for governor against Republican opponent and Ohio Attorney General Mike DeWine. Republicans have held a trifecta since the 2010 elections, and Democrats are hoping to end the GOP’s supermajority in the state legislature. Cordray also gives Democrats their best shot at reversing some of the Republican gerrymandering that has made Ohio home to some of the most gerrymandered districts in the country. Data for Progress, the left-wing think tank, worked with Launch Progress and EveryDistrict to raise funds for four House candidates and three Senate candidates as part of their “Give Smart” project.