On a night filled with hard losses, it was easy to forget that coming so close to victory in places seen as irredeemable also represented progress. The energy in the room up to that point had been jubilant. Unlike her primary watch party, at which the then-28-year-old learned of her stunning upset over 10-time incumbent Joe Crowley, this event was packed from the start, with a line at the door. The large space in the New York City neighborhood of Woodside, Queens, was filled with smiling young people in Ocasio-Cortez’s now-iconic purple and white campaign T-shirts, accessorized with millennial flair: rolled sleeves, oversized earrings, and, of course, red lipstick. A live flamenco band inspired dancing. Later, members of the crowd occasionally paired off as Latin music rang out. At one point, while I was talking to Justice Democrats founding member Alexandra Rojas, the music shifted and she paused, scanning the crowd. Her mom, she anticipated, was probably dancing somewhere. This was a song she couldn’t resist.

But halfway through Ocasio-Cortez’s victory speech, the politics of the outside world breached the ebullient sanctum of the party. CNN had called Beto O’Rourke’s loss to Ted Cruz, whose face hung above the room on large screens, temporarily tipping attention away from Ocasio-Cortez’s remarks.

It took a beat before Ocasio-Cortez realized what had happened. She had been about to hit one of her more popular points — highlighting the gap between America’s unprecedented wealth and the paltry support offered to the poorest among us — when groans escaped from the crowd.

“Right now, in the wealthiest nation in the history of the world, our greatest scarcity is not a lack of resources —” Ocasio-Cortez paused and repeated the line before realizing that the dispirited crowd wasn’t reacting to her words, but to the screen above their heads. “Oh, sorry guys. I was like, ‘Whoa! Room turned fast!’”

The crowd laughed, grateful, it seemed, for some levity in the face of a hard-felt defeat. “But, you know what?” improvised Ocasio-Cortez, sensitive to the fact that the crowd needed comforting before she continued with her prepared remarks. “What we need to do as well is realize that these short-term losses do not mean that we have lost in the long run. It does not. In 2018, we turned the state of Texas purple. That’s what we did this year.” The crowd rallied.

“We are going to flip that state in our generation, I’ll tell you that much right now. We will flip Texas; it’s just a matter of time. We should never be scared. There is never any fight that is too big for us to pick. We proved that this year.” She went on. “When we advocate and champion the causes of our neighbors and our economic dignity, and come with innovative and ambitious plans for our future, there is no state beyond our grasp, and no community beyond victory. We just need to keep at it.”

With that, she slipped back into her victory speech more seamlessly than politicians who have been giving speeches for as long as Ocasio-Cortez has been alive. 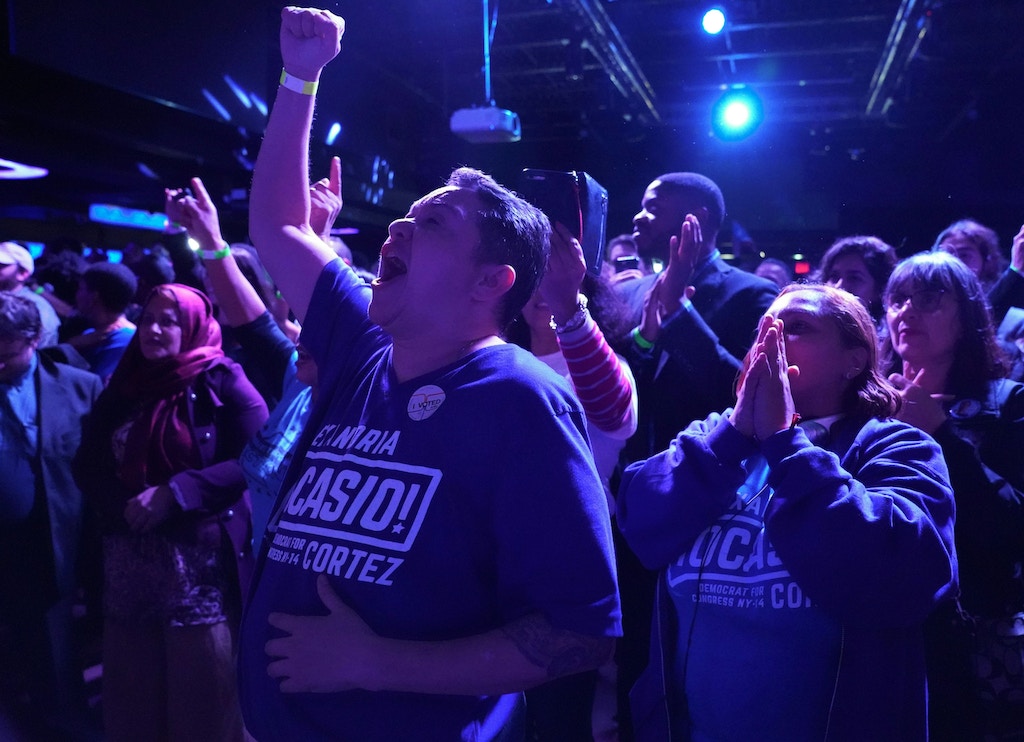 Supporters of Alexandria Ocasio-Cortez cheer while she speaks onstage during her election night party in Queens, N.Y., on Nov. 6, 2018.

What could have come off as an empty platitude resonated instead as much needed perspective. On a night filled with hard losses, including three high-profile governor’s races featuring compelling black candidates, it was easy to forget that coming so close to victory in parts of the country long deemed irredeemable represented progress in and of itself.

What last night revealed was that the red and blue troughs that define America’s political battleground are shallowly dug. In the industrial Midwest, newly minted Trump country, incumbent Democrats cruised to victory. Sharice Davids, a lesbian Native American, who is also a mixed martial arts fighter, ousted a Republican incumbent in deep-red Kansas; that same state, which Ocasio-Cortez and Sen. Bernie Sanders were ridiculed for visiting just a few months ago, now has a Democratic governor. They didn’t go blue, but states like Texas and Mississippi and Georgia did go purple. And as Ocasio-Cortez pointed out, that ain’t nothin’.

In fact, too frequently, politicians talk about red states and blue states — Donald Trump country and Hillary Clinton suburbs — as though the politics of people from these communities are as fixed as the gerrymandered districts they live in. Defying this logic, the Obama-to-Trump voter becomes a chimera uneasily dispatched with the truism that “one can be racist and vote for Obama,” while the inverse truth — that racist Trump voters could be convinced to vote for Democrats again — is dismissed by much of the pundit class as an attempt to pander to bigots. Meanwhile, despite polls showing otherwise, white Democrats are framed as being beyond racism: Voting for a Democrat seems absolution enough.

Nonwhites are flattened to the point of caricature. The diversity of a district becomes a shorthand for its progressivism — as though over one-third of Latinx Texans didn’t vote for Cruz — and the needs of minority voters are perceived as only skin-deep, even while universal causes like “Medicare for All” stand to benefit some of us much more.

This understanding of politics lacks imagination and insight. And importantly, it hasn’t worked. The job of politics isn’t just poll-based prognosticating, or deducing what we must believe from who we are and pandering accordingly. It’s the work of communication, of persuasion, of listening to people and crafting an agenda that meets their needs — and then of conveying that plan on a human level that supersedes partisanship. This is perhaps the most singular and important job of a politician: relating an empathic understanding of the people’s concerns; not just responding to polls, but sparking a movement that shifts poll results altogether.

Listening to Ocasio-Cortez succeed at this essential political task should remind us how few politicians are up to the task.

As she put it to me in an interview last night, “I think that when we truly listen to the communities that we are running in, [when] we are really connecting with the everyday people on the ground, it requires a progressive message to animate a disaffected electorate that has not historically come out. And so what I hope we learn, and what I hope we adopt moving forward, is to not be afraid of our values — to not be afraid of differentiating ourselves from the Republican Party, and really committing and doubling down to our vision.”

At the root of Ocasio-Cortez’s message has always been the understanding that what we have in common is more significant than what divides us. This is not a trite kumbaya observation intended to paper over real differences that require real political solutions, but rather an insight rooted in the reality that despite our politics, Americans understand intuitively that human dignity should be inalienable. As Ocasio-Cortez ultimately noted, following her impromptu remarks on Cruz’s victory: “Right now, in the wealthiest nation in the history of the world, our greatest scarcity is not a lack of resources, but the absence of political courage and moral imagination.”

It takes political courage to call for the abolition of U.S. Immigration and Customs Enforcement at a time when immigration is the country’s most perilous third rail. And it takes moral imagination to use the undeniable power of human dignity to leverage support for universal health care and a living wage.

If Trump has taught us nothing else, it is that boldness is rewarded, and conviction can be its own currency. Yesterday, authenticity was on the ballot with every candidate who forsook corporate political action money, challenged party orthodoxy with progressive policy positions, and dared to articulate a vision of the future rooted in values instead of polls. Yesterday showed that authentic progressive values can help to redefine our political reality. And if Ocasio-Cortez can shift the spirit of the House the way she lifted the spirits in Queens last night, we might just be alright.