Donald Trump mocked Emmanuel Macron for having a low approval rating in France, apparently unaware that French citizens have a far lower opinion of him. 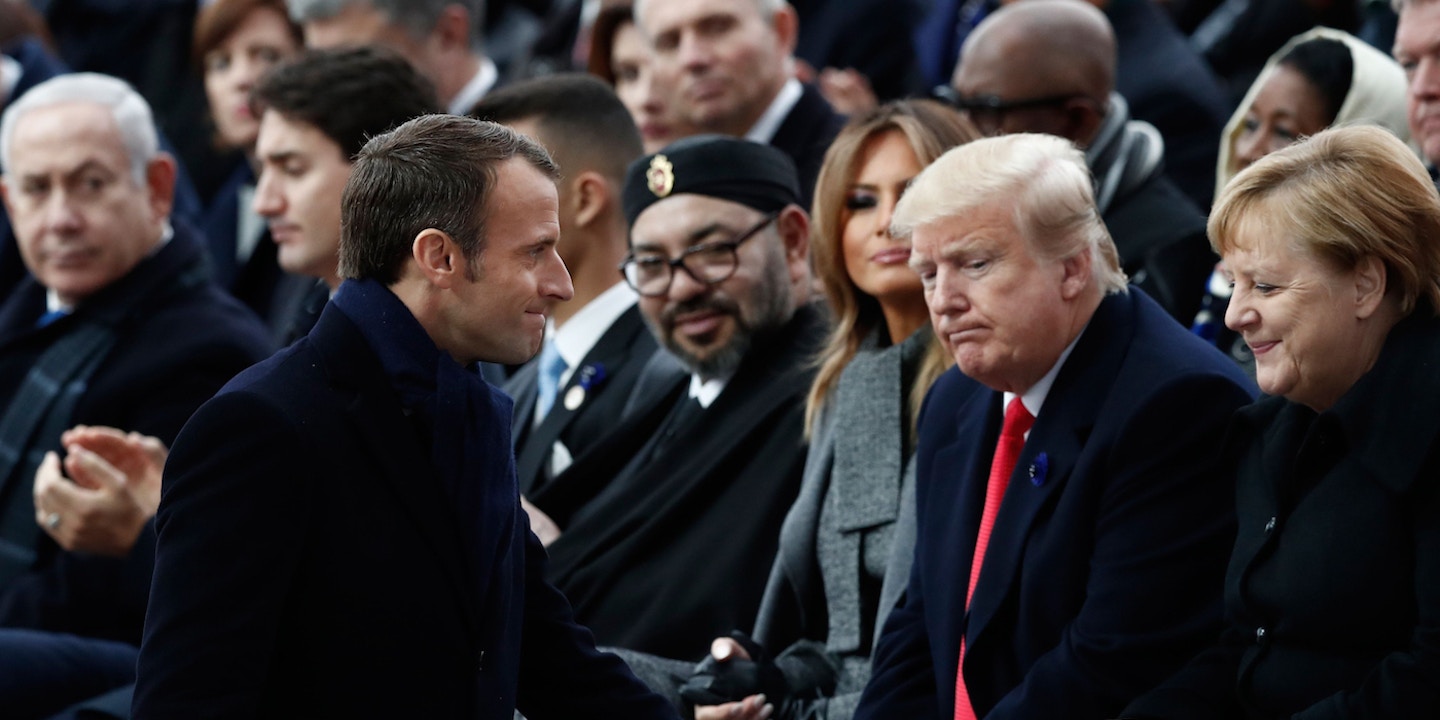 On Tuesday morning, the President of the United States encouraged Americans to study opinion polls in France, apparently unaware of a recent survey there showing that 8 of 10 French citizens consider him to be a dangerous, incompetent racist. According to the polling, conducted last week for Le Figaro, a conservative newspaper, just 20 percent of French citizens call Donald Trump competent, while 84 percent agree that he is “racist” and 83 percent say he is “dangerous.” His overall approval rating comes in at 10 percent.

Trump accidentally called attention to his vast unpopularity in France after enduring a weekend of harsh criticism for his conduct during a visit to Paris to mark the anniversary of the end of the First World War — specifically his decision to skip a ceremony honoring Americans who were killed in the conflict because it was raining.

By the time Trump had returned to Washington, even the French military had joined in, with a mocking reference to his aversion to rain on its official Twitter account.

When he finally responded on Tuesday — the sort of delayed reaction the French call “l’esprit d’escalier,” when you come up with what seems like the perfect retort but only when it is too late to deliver it in person — Trump could think of no better comeback than to lash out at his French counterpart, Emmanuel Macron, by pointing to his low approval rating among French voters.

Macron apparently earned Trump’s ire by using his speech to dozens of world leaders on Armistice Day to warn of the dangers of a resurgent nationalism across the globe.

“The old demons are rising again, ready to complete their task of chaos and of death,” Macron said on Sunday, a year and a half after he defeated the French nationalist Marine Le Pen for the presidency.

On Sunday, French president Emmanuel Macron condemned nationalism while Trump, a self-declared nationalist, was right next to him pic.twitter.com/c6WYFs8avL

“Patriotism is the exact opposite of nationalism. Nationalism is a betrayal of patriotism,” Macron said later in the speech, in remarks that were widely interpreted as a critique of Trump’s strident nationalism and “America First” slogan. “In saying ‘Our interests first, whatever happens to the others,’ you erase the most precious thing a nation can have, that which makes it live, that which causes it to be great and that which is most important — its moral values,” Macron said as Trump grimaced.

Trump's face after Macron's speech on nationalism vs patriotism is ? pic.twitter.com/JtxVUUKnWg

Having essentially subtweeted Trump to his face, Macron ensured that the American president would get the message by posting an English translation of the comments on his favorite communications platform, Twitter.

Patriotism is the exact opposite of nationalism. Nationalism is a betrayal of patriotism. By putting our own interests first, with no regard for others, we erase the very thing that a nation holds dearest, and the thing that keeps it alive: its moral values. https://t.co/w9AltyvMDw

The French president’s frank words seemed to echo his offer, after Trump withdrew from the global climate accord negotiated in Paris last year, to subsidize American climate scientists trying to “Make Our Planet Great Again.”

When Trump finally responded, he claimed that Macron — by criticizing the nationalist ideology that tore Europe apart twice in the past century — “was just trying to get onto another subject,” to deflect attention from his “very low approval rating in France” of 26 percent. “By the way, there is no country more Nationalist than France, very proud people — and rightfully so!” Trump added.

The President of the United States concluded his Twitter rant by unleashing the caps lock and suggesting that he would like to see the pro-European Macron ultimately toppled by Le Pen’s nationalists.

Macron’s office refused to comment, but France’s ambassador in Washington, Gérard Araud, noted on Twitter that another insulting tweet posted by Trump, in which he claimed that the French president wanted a European army to defend the continent “against the U.S.” was completely false.

For the sake of truth, Pres.@EmmanuelMacron didn’t say that EU needed an army “against the US”. It was an erroneous press report.

The French embassy also noted that it took part in the Veterans Day ceremony at Arlington National Cemetery on Monday — an event that Trump also skipped.

Yesterday we participated in a ceremony at @ArlingtonNatl to honor the sacrifices of soldiers during #WWI by laying a wreath on the tomb of the #UnknownSoldier. #VeteransDay pic.twitter.com/ZQPbZwMSf6