Macron offered Americans a message like those once delivered by U.S. presidents addressing people suffering under the yoke of dictatorship. 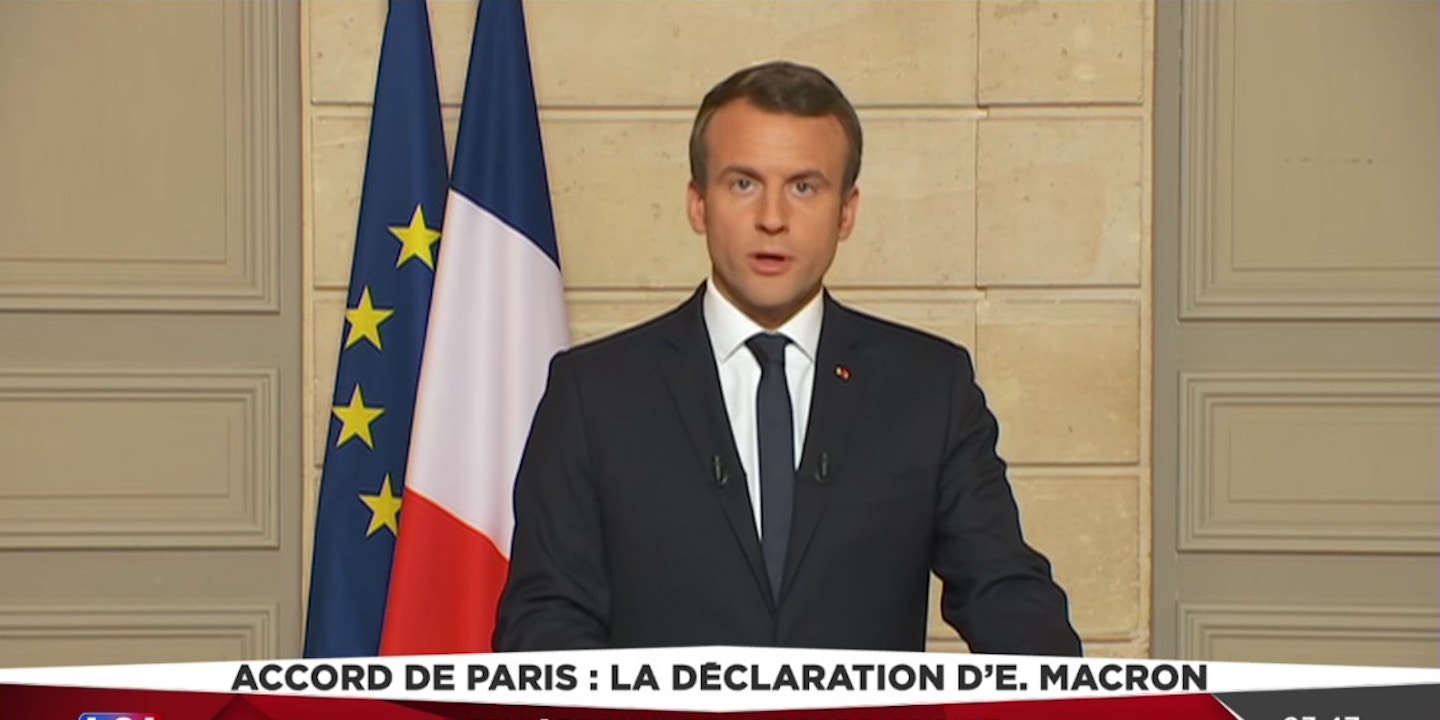 Just one hour after Donald Trump announced that he was withdrawing the United States from the global climate accord negotiated in Paris — saying that he was “elected to represent the citizens of Pittsburgh, not Paris” — the new French president, Emmanuel Macron, offered refuge in France to American climate scientists.

In a three-minute address to the American people streamed live from the Élysée Palace, Macron offered hope for the future, and a message of solidarity that seemed to echo those once delivered by American presidents to captive nations suffering under the yoke of dictatorship — or aimed at resistance fighters in an occupied country.

“Tonight, I wish to tell the United States, France believes in you — the world believes in you,” Macron said. “I know that you are a great nation. I know your history — our common history.”

To all scientists, engineers, entrepreneurs, responsible citizens who were disappointed by the decision of the US: pic.twitter.com/qxjPX8MhKt

“To all scientists, engineers, entrepreneurs, responsible citizens who were disappointed by the decision of the president of the United States, I want to say that they will find in France a second homeland,” he continued. “I call on them: come and work here with us. To work together on concrete solutions for our climate, our environment. I can assure you, France will not give up the fight.”

At the end of his remarks, the French president made it crystal clear that his message was intended as a rebuke of not just his American counterpart’s decision, but his entire worldview.

“I call on you to remain confident,” Macron said, standing in front the of the flags of both France and the European Union. “We will succeed, because we are fully committed, because wherever we live, whoever we are, we all share the same responsibility: Make Our Planet Great Again.”

We all share the same responsibility: make our planet great again. pic.twitter.com/IIWmLEtmxj

Macron’s social media team made sure that closing rejoinder to Trump and Trumpism was not missed by those lacking the strength or the stamina to make it to the third minute of his speech.

Reuters reports that before his speech, Macron told Trump in a brief phone call on Thursday that the climate deal signed in Paris in 2015 could not be renegotiated. He added that while France would continue to work with the United States on other matters, it would no longer discuss climate issues.

The German Chancellor’s spokesman, Steffen Seibert, shared a joint statement from Angela Merkel, Emmanuel Macron and Paolo Gentiloni, the Italian prime minister, which confirmed that “the Paris Agreement cannot be renegotiated, since it is a vital instrument for our planet, societies and economies.”

Statement by France,Germany + Italy: Paris Agreement cannot be renegotiated, it is a vitalinstrument for our planet, https://t.co/RXCvXWi0GF

Trump, whose beef with climate scientists might actually stem from his deep dismay at no longer being allowed to use aerosol hairspray, finished his own remarks by claiming a second time that he was acting to put the interests of Pittsburgh ahead of those of Paris. With this refrain, he was apparently hoping to con ill-informed voters into believing that the international agreement negotiated in the French capital, in which 195 nations agreed to limit fossil-fuel emissions for the global good, was somehow to the unique benefit of the French people.

The same minute Trump finished speaking, however, the mayor of Pittsburgh, Bill Peduto, reminded him that the city had in fact voted overwhelmingly against him.

Fact: Hillary Clinton received 80% of the vote in Pittsburgh. Pittsburgh stands with the world & will follow Paris Agreement @HillaryClinton https://t.co/cibJyT7MAK

Peduto also confirmed that the city’s government would continue to honor its obligations under the Paris framework.

The mayor of Paris, Anne Hidalgo — who was forced to respond recently to Trump’s bizarre claim that “Paris is no longer Paris,” because of the threat of terrorism — quickly seconded the Pittsburgh mayor’s affirmation of the role of local governments.

Once again @realDonaldTrump is wrong. #Paris & #Pittsburgh do stand together for the #ParisAgreement #Cities4Climate https://t.co/7HGQ4AQ9Rj

In his own response to Trump’s decision, Canada’s prime minister, Justin Trudeau, held out hope for working with local governments in American cities and states, while expressing regret at what he called a decision by “the United States federal government.”

We are deeply disappointed that the United States federal government has decided to withdraw from the Paris Agreement.

“We are all custodians of this world,” Trudeau added, “and that is why Canada will continue to work with the U.S. at the state level, and with other U.S. stakeholders, to address climate change and promote clean growth.”

Subsequent reporting from The Washington Post on what led to Trump’s decision, and his strange focus on France, revealed that the American president has little understanding of how the climate deal works, and was also said to be “irritated and bewildered” that Macron upstaged him with a very firm handshake during their photo-op last week at the U.S. Embassy in Brussels.

Having seen Trump try to assert physical dominance over other world leaders, by pulling them forcefully towards him while shaking hands for the cameras, Macron told a French newspaper that he had come prepared. “My handshake with him, it wasn’t innocent,” Macron said. “We must show that we will not make small concessions, even symbolic ones.”

“Donald Trump, the Turkish president or the Russian president see relationships in terms of a balance of power, Macron added, likening Trump to Recep Tayyip Erdogan and Vladimir Putin. “That doesn’t bother me. I don’t believe in diplomacy by public abuse, but in my bilateral dialogues I won’t let anything pass.”