Incumbent Democrats are about to start showing a lot more interest in a Green New Deal. 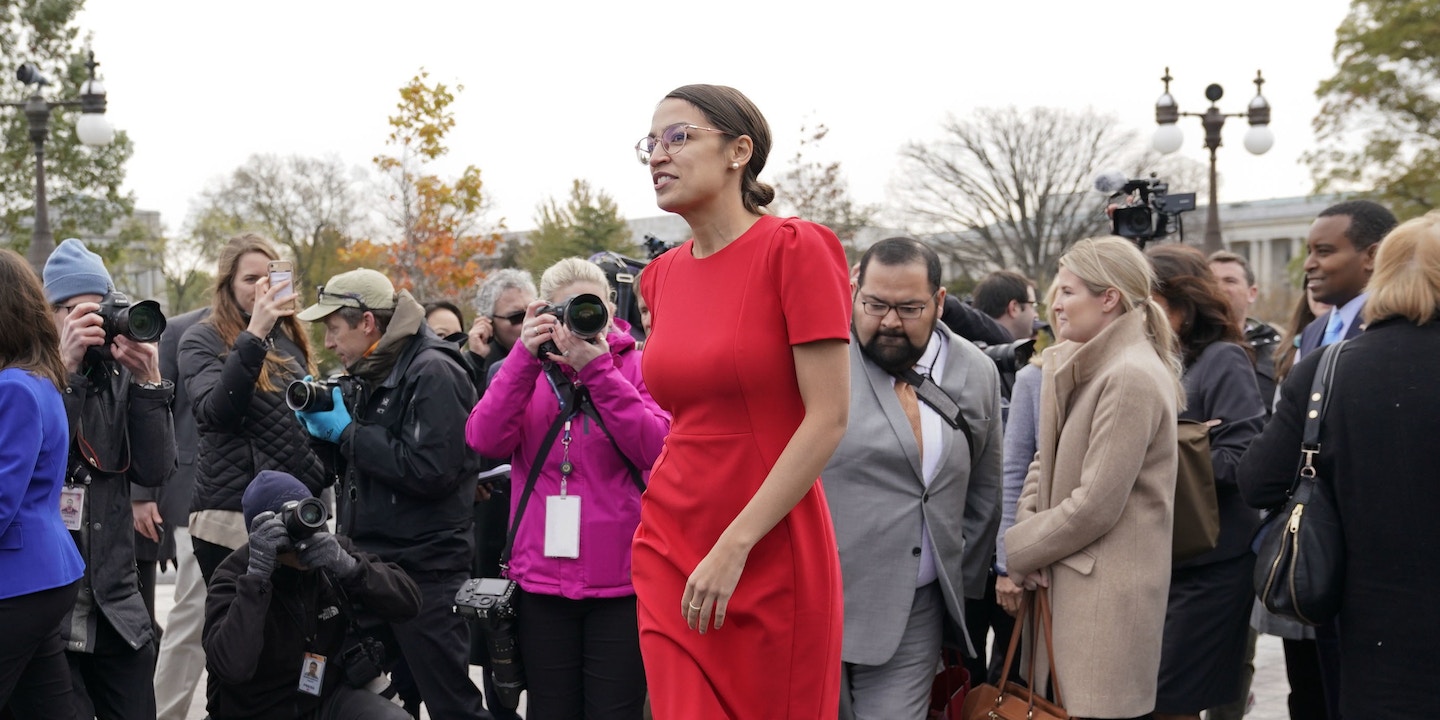 Now that Alexandria Ocasio-Cortez is transitioning from insurgent candidate to incumbent member of Congress, a major question on the minds of her soon-to-be colleagues has been whether she will continue the practice of endorsing primary challenges to sitting members of Congress, or whether she will work to ingratiate herself with the institution she’ll be joining.

That question was given a resounding answer on Saturday evening, as she gathered on a strategy call with volunteers from the group Justice Democrats, which played a key role in the elections of Ocasio-Cortez, Rashida Tlaib, and other representatives-elect.

On the Saturday video call, Ocasio-Cortez announced to supporters that she and Justice Democrats would continue challenging incumbents in blue districts where the sitting member isn’t representative enough of the district, ideologically or demographically. And for that, Ocasio-Cortez said, she wants help recruit candidates. “All I’m asking you to do is throw your hat in the ring, say what the heck,” she said.

Tlaib didn’t join the call, but she released a statement that accompanied the announcement. “Powerful women coming together to reclaim our government is exactly what is needed right now,” she said. “Help uplift women like us at all levels of government. We still need more of you to run with us. So get your squad together. We are waiting for you.”

By winning a Detroit-area seat long held by former Rep. John Conyers, Tlaib fended off a divided local political establishment. She addressed protesters on Tuesday before they marched on Pelosi’s office, where Ocasio-Cortez later met them. Ocasio-Cortez upset Rep. Joe Crowley, the boss of the political machine in Queens, New York.

The pledge from Tlaib and Ocasio-Cortez to continue to primary incumbents injects a new element of politics into intra-caucus maneuvering. The pair are rallying support for a Green New Deal and are likely to find an increasing number of converts eager to sign aboard in the next few weeks. Meanwhile, only a handful of incumbents refuse to take corporate PAC money, a number that is also likely to rise given the pressure of a potential primary.

“All Americans know money in politics is a huge problem, but unfortunately the way that we fix it is by demanding that our incumbents give it up or by running fierce campaigns ourselves,” Ocasio-Cortez said.

Outgoing Rep. Michael Capuano, a strong progressive from Massachusetts, was felled in a primary this year in which his acceptance of corporate money was a major campaign issue. He was beaten by City Councilor Ayanna Pressley, who had the backing of Ocasio-Cortez and Justice Democrats.

“We recruited and supported Ocasio-Cortez all the way to a historic victory and now we’re going to repeat the playbook,” said Justice Democrats Executive Director Alexandra Rojas. “There’s lots of blue districts in this country where communities want to support a new generation of diverse, working-class leaders who fight tirelessly for their voters and build a movement around big solutions to our country’s biggest problems. We’re creating an alternative pathway to Congress for grassroots candidates to become leaders in the Democratic Party.”

In a span of two years, Justice Democrats ran candidates in 78 primaries, went on to compete in 26 general elections, and a total of seven Justice Democrats were elected, in the process winning 3.7 million votes, according to the group’s calculations.

Though critics have pointed out that most of the organization’s candidates ended up losing their races, Ocasio-Cortez said Justice Democrats candidates, along with those backed by Our Revolution and other groups, “built so much progressive power in their districts that they really brought their districts to the cusp for 2020” regardless of the outcome. She cited the impact of J.D. Scholten’s narrow loss to white nationalist Rep. Steve King in Iowa, and Liuba Grechen Shirley’s challenge to Long Island’s Republican Rep. Pete King. Shirley was the first candidate to get federal approval to use campaign funds for child care, though she ultimately lost to King, who had the strong backing of former New York City Mayor Michael Bloomberg.

On the call, Ocasio-Cortez also talked about the harsh criticism she got from liberals for joining young environmental activists at the protest at Pelosi’s office.

“If I made people mad, they could have put me on the dog-walking committee. They still might,” she joked.

Ryan Grim is the author of the forthcoming book, “We’ve Got People: Resistance and Rebellion, from Jim Crow to Donald Trump.” Sign up here to get an email when it’s published.