Far from remaining aloof from politics, No Labels has been swooping down into the fray in recent years on behalf of Republicans and conservative Democrats. 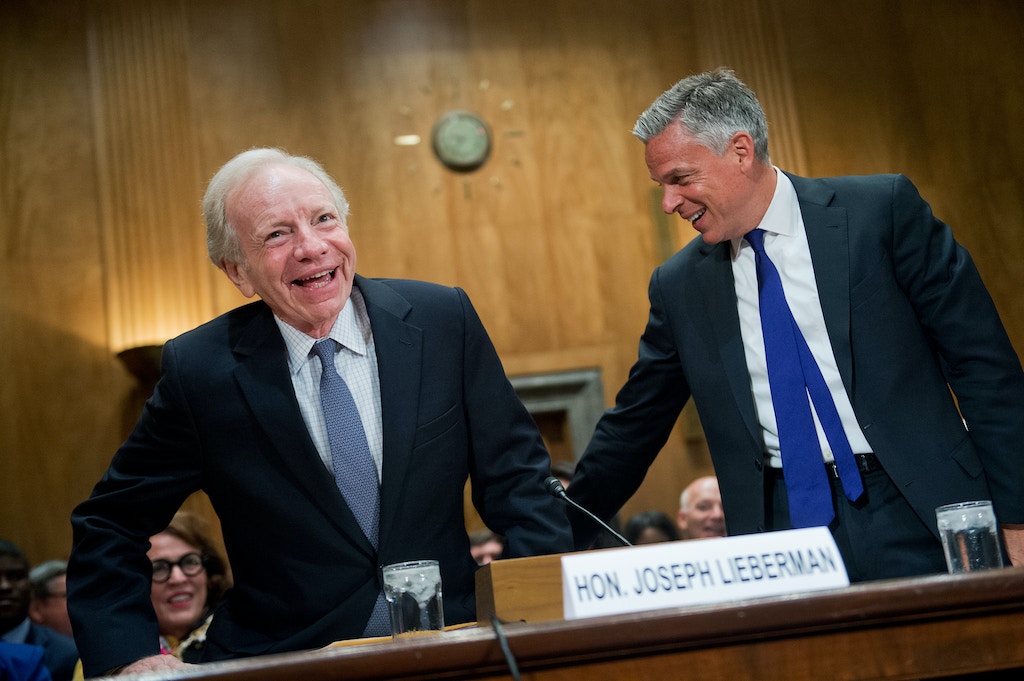 Since 2010, a group called No Labels has embodied a particular approach to politics and policy in Washington, D.C.; it’s one that insists the real problems are partisanship, divisiveness, and incivility, and that if only sensible centrists from both parties could be brought together under the right conditions, the halcyon days of the past will return.

Yet curiously, the sensible solutions so often proposed by No Labels and its ilk have an uncanny likelihood of benefiting one particular element of our nation’s political economy: the superrich, or more precisely, the finance industry.

A new report on Monday from the Daily Beast adds a sweeping array of details to what many long knew or suspected about this movement, which allegedly wants to remain above the fray: It’s funded by the barons of hedge funds and private equity.

Far from remaining aloof from politics, No Labels has consistently been swooping down into the fray in recent years on behalf of Republicans and conservative Democrats. The House Problem Solvers Caucus, which was produced and is funded by No Labels, made headlines recently in its quest to hold up Nancy Pelosi’s speakership bid unless she supported their “Break the Gridlock” rule changes.

But the full suite of reforms would have just ended up benefiting the GOP; after all, it’s not like the Problem Solvers Caucus pressed for these rules when Paul Ryan was up for the position. Selectively tying the hands of Democratic leadership in the wake of a Democratic rout in the midterms isn’t balanced governance, it simply helps the right.

While it was easy to see through the Problem Solvers Caucus’s (failed) ploy to undermine Pelosi, last week saw another effort to push conservative ideology under the guise of pragmatic bipartisanship. A working group consisting of experts from Opportunity America, the Brookings Institution, and the American Enterprise Institute (supposedly liberal- and conservative-leaning counterparts in the think tank world) released a policy report on solutions for the working class. It was touted as a “bipartisan plan of action” developed in the wake of Donald Trump’s election. Ostensibly representing the “liberal” side of the working group as one of three Brookings fellows is Bill Galston — one of the co-founders of No Labels and the organization’s most public Democratic face.

In a glowing write-up, conservative New York Times columnist David Brooks commended the report’s authors for establishing a “broad left/right agenda that 70 percent of Republicans and Democrats could support” and called for the “return of the chastened establishment.” So what, exactly, are the ideas that the bipartisan working group proposes?

In exchange for rather uncontroversial and moderate policies — like expanding the earned income tax credit for childless workers; making the child and dependent care tax credit refundable; and more funding for career education and training — the working group recommends adding work requirements to the Supplemental Nutrition Assistance Program, or SNAP, and promoting marriage. They have also put forward proposals to “reform unemployment and disability insurance to promote work,” including forcing unemployment insurance beneficiaries to pick up their checks at unemployment offices and cracking down on disability insurance claimants.

Many of these policies are debunked right-wing ideas that have continuously been given the veneer of credibility from the “centrist” think tank establishment. Take, for example, adding work requirements to SNAP. The efficacy of work requirements has long been debunked: When the same conditions were added for welfare recipients in 1996, employment did not increase in the long term. That’s not to mention the fact that most low-income people receiving benefits who can work are already doing so.

Or take the report’s focus on promoting marriage through the “success sequence,” which is the idea that all young people should first get a college degree, then marry, then have children in order to ensure a successful life. Many have long criticized the success sequence because not only is it impossible to enforce, but it doesn’t even make for good policy. (Matt Bruenig of the People’s Policy Project often points out that having multiple incomes in a household is what cuts poverty, not marriage.) As academic critics told The Atlantic, the sequence has mainly been used to push conservative personal responsibility narratives, which are then used to undermine spending on social programs:

Critics of the sequence within academia, like Philip Cohen, a professor of sociology at the Maryland Population Research Center at the University of Maryland, argue that government promotion of marriage doesn’t lead to more marriages. Instead, they say, many sequence enthusiasts want to restigmatize out-of-wedlock births. By doing so, they aim to put the responsibility for poverty on the impoverished just as Krauthammer implied back in the early ‘90s, thus justifying cuts in government support while ignoring the role of late-20th-century American-style capitalism in pushing families into financial insecurity.

It’s possible that these “bipartisan” policies are simply a bad deal, the result of concessions between the working group’s liberals and conservatives. But the report specifically makes sure to point out that their proposals were the result of “more than horse trading” and that they were truly “grounded in common values.” So what, exactly, are these values?

The authors’ shared principles include the “centrality of work,” a “renewal of norms” (mainly the norm that people should work), and more “expectations” from employers to take “voluntary corporate action” to support the working class (an idea that is radical in its delusion). They also vow to “do no harm” — meaning that all their remedies for the working class are budget neutral.

This last point, the adherence to deficit-neutral spending, is certainly something that both sides of the aisle have pushed. But it’s a fearmongering tactic that ends up being used to justify a right-wing agenda of cutting social programs for the poor and working class. As economist Stephanie Kelton explained in the New York Times, the debt and deficit “serve as body armor to politicians who would deny resources to struggling communities or demand cuts to popular programs.” A “centrist” think tank class that refuses to put forward policy ideas that increase spending will only serve to bolster the conservative agenda. Perhaps the parts of the report that best reveal the veneer of the working group’s bipartisanship are the policies that the authors write off from the start: free college and universal basic income. The first idea, they argue, fails to target the working class and the latter, they say, “devalue[s] work.” Yet there is no similar condemnation of radical right-wing policies — like, say, the $1.5 trillion Trump tax cut for corporations, which the authors merely say is “beyond our remit.” This is despite the fact that the regressive bill is going to deepen inequality between low-income workers and the wealthy, something that should surely be within the purview of a report on the working class.

The Problem Solvers Caucus is the most noxious and obvious recent example of pragmatic bipartisanship that ends up benefiting the GOP. But think tanks like the Brookings Institution have long given credence to conservative policies — which end up being disastrous for the working class — under the guise of working across the aisle.

Elite think tanks fail to come up with genuinely useful bipartisan proposals because their definition of the partisans involved only includes other elites within their own circles. Indeed, there is overlap between the Daily Beast’s list of donors to No Labels and the donors that the Brookings Institution named on its 2018 annual report: Howard Marks, co-founder and co-chair of Oaktree Capital Management, is listed as having given between $100,000 and $249,999 to the think tank; and the foundation of Andrew Tisch, co-chair of Loews Corp, gave between $250,000 and $499,999. The Walton Family Foundation gives to Brookings, while Christy Ruth Walton is a donor to No Labels.

But if the benchmark for a bipartisan policy is that a significant chunk of both parties, along with independents, support it, No Labels and its fellow travelers would have a lot more ideas to work with if they looked at the preferences of voters rather than politicians. All of a sudden, policies they’d written off — free public college, “Medicare for All,” and even a jobs guarantee — reveal themselves as genuinely bipartisan solutions to genuinely intractable problems.

That it apparently didn’t occur to Brookings or American Enterprise Institute to prioritize the interests of people over those of the elite tells you precisely who these so-called centrist solutions are intended to benefit. If you need even more precision, here they are specifically, courtesy of the Daily Beast: