Hagiographies of the late president neglect his role in a secret war in Nicaragua and illegal weapons sales to Iran for the release of hostages. 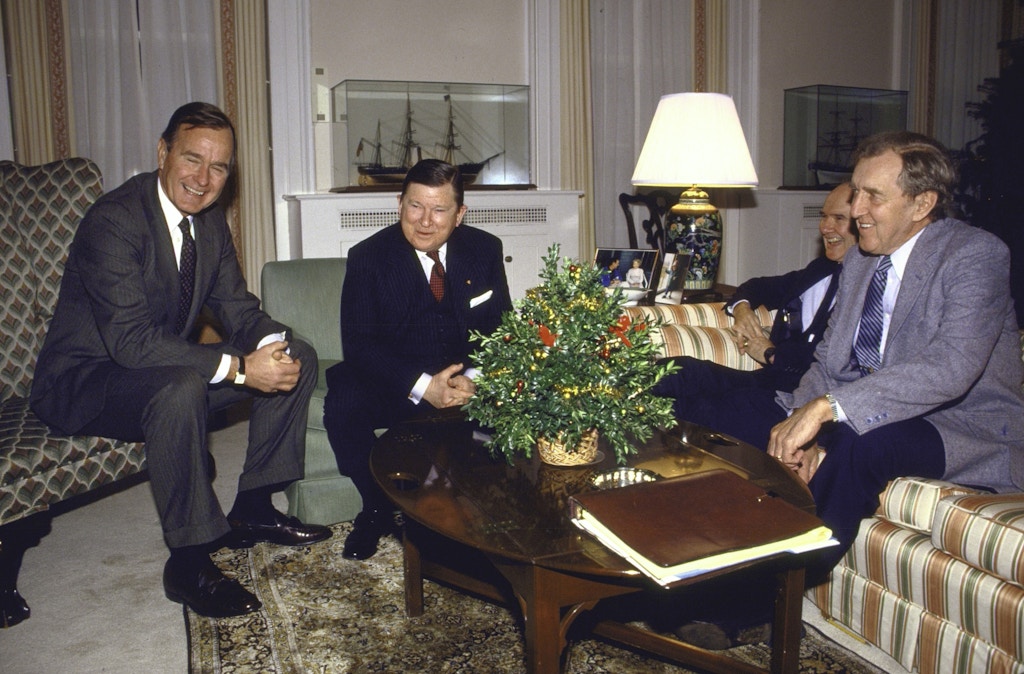 The effusive praise being heaped on former President George H.W. Bush — “a calm and vital statesman” who exuded “decency, moderation, compromise” — risks burying his skeletons with him. One of the most notable skeletons that has gotten scant attention in recent days is his role in the Iran-Contra scandal.

As CIA director in the mid-1970s and as Ronald Reagan’s vice president, Bush helped forge a world of strongmen, wars, cartels, and refugees that continues today. In particular, he was deeply involved in the events that became known as the Iran-Contra scandal, a series of illegal operations that began with a secret effort to arm Contra fighters in Nicaragua in the hopes of toppling the leftist Sandinista government; this effort became connected to drug trafficking, trading weapons for hostages with Iran, and banking scandals.

In 1987, Arthur Liman, chief counsel for the Senate Select Committee on Secret Military Assistance to Iran and the Nicaraguan Opposition, described it as a “secret government-within-a-government … with its own army, air force, diplomatic agents, intelligence operatives and appropriations capacity.” Independent counsel Lawrence Walsh, tasked with investigating Iran-Contra, concluded that the White House cover-up “possibly forestalled timely impeachment proceedings against President Reagan and other officials.” Bush was a central figure in this.

Bush’s spy history is murky. According to Russ Baker, author of “Family of Secrets,” a history of the Bush family, in the late 1950s, Bush allegedly allowed the CIA to use an offshore oil rig he owned near Cuba as a staging ground for anti-Castro Cubans to raid their homeland. In 1967, Bush visited Vietnam as a freshman member of Congress, and Baker claims that Bush was accompanied by his business partner, a CIA agent, to investigate the Phoenix Program, the CIA torture and assassination operation that killed more than 20,000 Vietnamese by 1971.

These pieces come together when Bush served as CIA director from January 1976 to January 1977. During his tenure, he met his future national security adviser, Donald Gregg, who was involved in operations linked to the Phoenix Program as a former CIA station chief in Saigon. There, Gregg fought alongside Cuban exile and CIA agent Felix Rodriguez, who helped track down and kill Cuban revolutionary Che Guevara.

Bush was at the CIA during the height of Operation Condor, an international “kidnap-torture-murder apparatus” run by six Latin American dictatorships and coordinated by Washington. In an Operation Condor plot carried out in October 1976, Chilean secret police assassinated former Chilean diplomat Orlando Letelier and American Ronni Moffitt with a car bomb in Washington, D.C. Bush misled an FBI investigation about Chile’s responsibility. Also as spy chief, Bush met his Panamanian counterpart, Manuel Noriega, already suspected at the time of drug trafficking. (As president, Bush ordered the invasion of Panama in 1989 to remove Noriega from power, who was the country’s ruler by that point.)

As vice president, Bush became an architect of the “secret government” that came into being for the Iran-Contra operations. Official investigations of Iran-Contra are limited to the period after October 1984 when Congress banned military and intelligence services from providing direct or indirect support to the Contras. But Gary Webb’s expose on CIA and Contra links to cocaine smuggling, “The Dark Alliance,” dates to 1981 the covert U.S. support for the Contras. Cobbled together from remnants of Nicaragua’s defeated National Guard, the Contras were notorious for torture, assassination, and other atrocities. The Phoenix-Condor link reached Central America, as the CIA recruited veterans of Argentina’s Dirty War to train the Contras, who ignited a decadelong war that killed an estimated 50,000 Nicaraguans.

Rolling Stone dates Bush’s involvement in the Contra war to 1982, when he reportedly conspired with CIA chief William Casey in an operation they code-named “Black Eagle.” Working under Bush, Donald Gregg managed finances and operations for the Contras, according to Rolling Stone. Rodriguez handled arms flights to Central America and negotiated with military commanders there. Historian Douglas Valentine has claimed that in 1981, Bush authorized these veterans of the Phoenix Program to initiate a “Pink Plan” terror war against Central American insurgents.

Black Eagle masked its operation by relying on the Israeli Mossad to acquire and ship weapons to Central America, employing Panamanian airfields and companies as fronts, according to the Rolling Stone story. But the planes, once emptied of their arms cargo in Central America, were repurposed by Noriega and the Medellín cartel to ship drugs back to the United States. The CIA allegedly stuck a deal with the Medellín cartel’s primary contact, Barry Seal. In return for Seal hauling weapons to the Contras, the CIA protected him as his operations smuggled an estimated $3 billion to $5 billion in drugs into the United States.

The White House also leaned on Gulf State monarchies to cough up more than $40 million for the Contras, violating the 1984 congressional ban known as the Boland Amendment. In 1985, Lt. Col. Oliver North coordinated with Israel to ship more than 2,000 anti-tank missiles to Iran through Israel in exchange for Iran’s assistance in freeing American hostages held in the region — and the profits were used to fund the Contras.

The maneuver, which violated the Arms Export Control Act, was extraordinarily cynical. Iran was mired in a brutal war with Iraq, which was backed by Bush and other senior Reagan administration officials beginning in 1982. Through the BNL bank that would later collapse in scandal, Iraq received more than $4 billion of U.S. Department of Agriculture credits. Most of that money reportedly went to buy weaponry even as Iraq waged chemical warfare against Iran and its own Kurdish citizens.

Both the Contra weapons shipments and the arms-for-hostages deals were exposed in 1986.

Much is still not known about Iran-Contra because of document shredding, deceit, and cover-ups by Reagan-era officials. Congress handcuffed its inquiry by failing to subpoena Oval Office recordings and calling knowledgeable witnesses. Robert Parry, an Associated Press reporter who uncovered the arms-for-drugs trade years before Webb, criticized the media for failing to dig into the story and succumbing to White House pressure and perception management.

On Christmas Eve 1992, then-President Bush decapitated the investigation by Walsh. Bush pardoned six figures, including Secretary of Defense Caspar Weinberger, whose trial was about to begin, with Bush likely called to testify. Walsh was livid. Saying “the Iran-Contra cover-up … has now been completed,” he called Bush a “president who has such a contempt for honesty [and] arrogant disregard for the rule of law.” Bush’s pardons are newly relevant because Bush consulted his attorney general at the time, William Barr, who reportedly did not oppose the pardons. Barr has just been named by President Donald Trump as his nominee for attorney general, where he may once again confront the issue of presidential pardons of senior government officials caught in an illegal conspiracy.

Bush’s role in the Iran-Contra scandal shows that his legacy is far darker than what is being reported amid his death and funeral. The truth is that he coddled dictators and death squads, undermined democratic institutions, and trashed the Constitution. He created the conditions that helped give rise to Donald Trump.