Keep Your Eyes on the Narcissist: Donald Trump’s Latest Antics Are Driven by Fear of Robert Mueller

Trump is a psychopathic criminal who feels cornered by the special counsel, so he is lashing out in every direction. 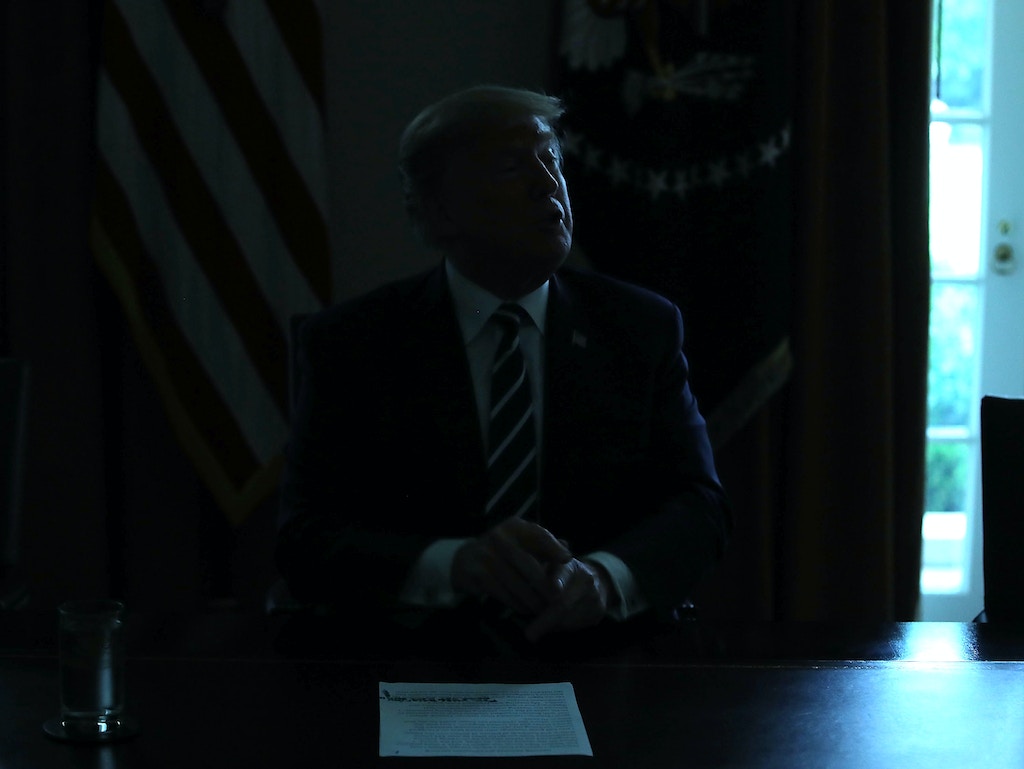 The lights temporarily go out in the Cabinet Room as U.S. President Donald Trump talks about his meeting with Russian President Vladimir Putin on July 17, 2018 in Washington, D.C.

A malicious loner paralyzed one of the world’s great cities this week. Meanwhile, a drone operator shut down a major international airport.

Donald Trump and the drone enthusiast who halted flights out of London’s Gatwick Airport apparently have a lot in common. Both have been willing to wreak havoc with a callous disregard for the public.

The motivation behind Trump’s pre-holiday assault on Washington — sowing chaos, breaking promises, shutting down the federal government, changing his policies from one minute to the next, forcing out one top official after another, spooking the stock market – is easily explained. Trump is a psychopathic criminal who feels cornered by Special Counsel Robert Mueller, so he is lashing out in every direction.

After two years in office, at least one thing about Trump has become predictable: He reacts violently whenever Mueller appears to be making progress in his investigation. When he hears Mueller’s footsteps, Trump has one go-to move that he cynically uses time and again: He returns to the issues and slogans that energize his base, no matter what the cost. He embraces his base because he believes it will provide him political protection from the fearful Mueller.

Trump has plenty of reason to worry about Mueller these days. The signs are everywhere that Mueller’s investigation is intensifying and closing in on Trump and the crooks around him. It is even possible that Mueller may soon complete his work and issue a final report – or even a criminal indictment of Trump. What’s worse, from Trump’s point of view, is that in January the Democrats will take over the House of Representatives from his Republican enablers, making it far more difficult for him to get rid of Mueller. In fact, the House Intelligence Committee, which has been a laughingstock under Republican rule, will soon have a Democratic chair with subpoena power to conduct an aggressive investigation of Trump, perhaps picking up where Mueller leaves off.

So it is not really surprising that Trump is throwing a tantrum.

In fact, there’s been so much news about the Mueller investigation and related inquiries recently that it has been difficult to keep up.

Just last Tuesday, Michael Flynn, Trump’s former national security adviser who made his name with the Trump crowd by leading chants of “lock her up” about Hillary Clinton at the 2016 Republican National Convention, was dressed down by a federal judge who harshly mused about whether Flynn had sold out his country and could be charged with treason. Flynn was in front of the judge to be sentenced for lying to the FBI about his conversations with the Russian ambassador during the transition after the 2016 election, but his sentencing was delayed to give him an opportunity to cooperate more fully with Mueller’s office in order to win a more lenient sentence.

Michael Cohen, Trump’s former personal lawyer, has repeatedly been in the headlines in recent weeks, and is now emerging as one of Trump’s biggest potential legal problems. In November, Cohen pleaded guilty to lying to Congress about a proposed Trump project in Moscow. Cohen had told Congress in 2017 that the deal had been abandoned by January 2016, but in fact the project was still under consideration as late as June 2016, in the middle of the presidential campaign, when Trump was about to become the Republican nominee. In a separate case in New York in December, Cohen was sentenced to three years in prison for a series of criminal acts, including violating campaign finance laws by making payments to two women to keep their past affairs with Trump from becoming public during the presidential campaign. Cohen says that Trump authorized the payments.

In early December, Maria Butina, a young Russian gun rights activist, pleaded guilty to conspiring to act as a foreign agent by infiltrating the conservative movement in the U.S. on Russia’s behalf and has agreed to cooperate with prosecutors. Butina previously worked with Alexander Torshin, a powerful Russian politician with close ties to Russian President Vladimir Putin. Paul Erickson, a longtime Republican operative and Butina’s boyfriend, may also be charged, the Daily Beast reported in December. Though not part of the Mueller probe, Butina’s prosecution sheds light on a related web of Russian influence operations aimed at promoting rightwing ideas championed by Trump and his allies.

In December, the parent company of the National Enquirer admitted that it had paid a woman to suppress the story of an affair with Donald Trump during the campaign and reached a deal to cooperate with federal prosecutors in order to avoid prosecution. David Pecker, the chief executive of the magazine’s parent company AMI, has reportedly been granted immunity in exchange for cooperating with prosecutors.

Meanwhile, the House Intelligence Committee agreed to turn over to Mueller the transcripts of testimony by longtime Trump ally Roger Stone. That suggests that Mueller, who has been pursuing links between Stone and WikiLeaks during the campaign, may be considering charging Stone with lying to Congress.

To top it off, there were reports in recent days that an unidentified foreign company has been fighting a grand jury subpoena issued in connection with Mueller’s investigation. Although it’s not clear what role the company might play in Mueller’s probe, a federal appeals court ruled this week that the firm must cooperate with the grand jury, according to press reports.

With so many of his cronies facing serious legal trouble and ready to cooperate with Mueller, it’s no wonder that a weak and frightened Trump has started insulting them in public. He called Cohen a “rat” for being willing to talk.

Bottom line: Anyone who thinks that Trump’s frenzied troop pullouts and government closure this week have anything to do with substantive policy issues hasn’t been paying attention for the last two years. Anyone who thinks that Trump actually cares about immigration, border security, the well-being of American troops, or U.S. involvement in Syria or Afghanistan will be deeply disappointed when he suddenly reverses himself again a few days or weeks from now, if and when he believes such a reversal will help him survive Robert Mueller.

Never forget that everything Trump does is about saving his own skin.