My Daughter Reality Winner Faced Severe Punishment, but Key Figures in the Trump-Russia Scandal Are Getting Off Easy

Those implicated in the Trump-Russia probe do not appear to be paying nearly the price that Russia hacking whistleblower Reality Winner is. 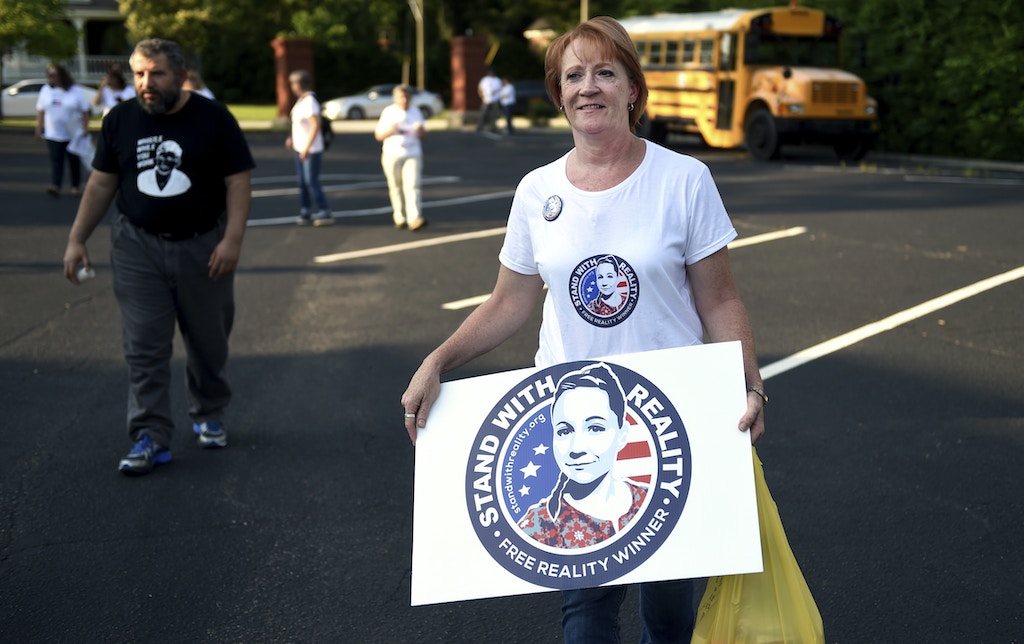 Billie Winner-Davis, mother of Reality Winner, carries a sign in support of her daughter outside the Lincoln County Law Enforcement Center in Lincolnton, Ga., on June 3, 2018.

Let me introduce myself. I am the mother of Reality Leigh Winner, a 27-year-old U.S. Air Force veteran who is in prison for leaking a document with proof of Russian election hacking efforts. I am writing now because I am outraged: While my daughter languishes in prison, those actually responsible for threatening our election continue to get off easy.

My daughter was sentenced to five years in prison for releasing a single document from the National Security Agency with proof of a threat to our voting system, when no one else would give the public the truth. She was widely reported to be the source for a June 2016 article in The Intercept on an NSA report detailing phishing attacks by Russian military intelligence on local U.S. election officials. (The Intercept has said it received the document anonymously.)

Her conviction wrongly portrayed her as a traitor and spy. To give the public proof of a threat to our nation, Reality violated her contract and nondisclosure agreement (she worked for a company that performed work for the NSA), and may have violated the law. She did so at a time when Russian interference in our 2016 presidential election was being hidden and downplayed.

Those who actually played roles in the malfeasance surrounding the Trump campaign and transition do not appear to be paying near the price that Reality Winner is.

She certainly should be held accountable for her actions, and she is. But other figures in the news today — those who actually played roles in the malfeasance surrounding the Trump campaign and transition — do not appear to be paying near the price that she and our family are paying.

Even though the prosecution made false statements to keep her jailed — saying that she had multiple classified documents in her possession — the judge accepted their apologies and still kept her locked away in deplorable conditions. She was deprived of contact with her family and friends, she was deprived of an adequate diet and nutrition, her mental health needs were ignored by the system, she was assaulted and injured, and deprived of fresh air and sunlight and basic needs. The government knew what to do to break her and they did.

In June 2018, Reality pleaded guilty to the one charge against her, in a deal that resulted in the longest-ever sentence imposed for a crime along these lines. Although Reality’s legal team did their best to build a defense for her, the court ruled against them at every turn, and the threat of 10 years in prison and hefty fines if she didn’t prevail at trial became too much to battle against.

Despite having a spotless record, distinguished military service, documented volunteerism, and service to her community, the government’s sentencing memo again portrayed Reality as an enemy of the country. On August 23, 2018, the court sentenced Reality to 63 months in prison and three years of supervised release. In a press release, U.S. Attorney Bobby Christine stated that resolving the case with this plea agreement was the best resolution, as a trial may risk the further disclosure of classified information. He said that the sentence imposed on Reality “promotes respect for the law and affords deterrence to similar criminal conduct in the future” — using Reality as the example. He referred to her as a “quintessential example of an insider threat.” 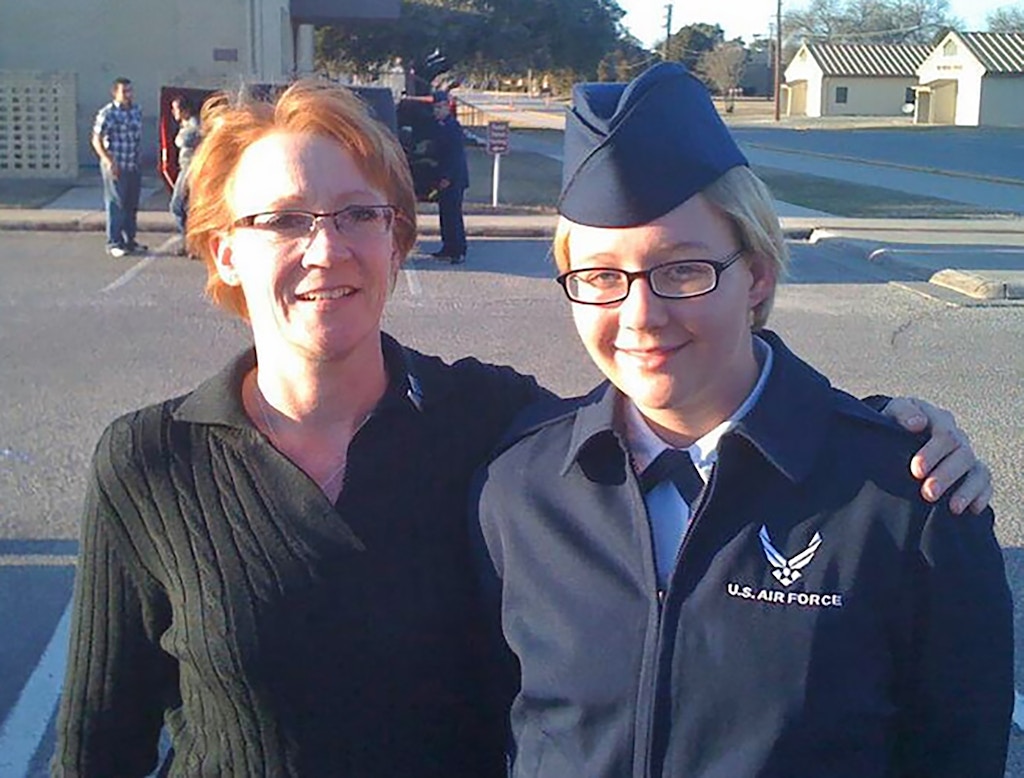 Reality’s case, treatment, and sentence are more than enough to stoke my outrage, but every day, I become angrier and more frustrated with the news. The facts of the entire investigation into Russian election interference — a saga of greed — are heartbreaking. It is maddening to watch my daughter in prison as the so-called justice system interacts in such drastically different ways with Paul Manafort, Rick Gates, George Papadopoulos, Michael Flynn, and Michael Cohen.

First, Manafort and Gates. In February 2018, Special Counsel Robert Mueller handed down 32 indictments on these two men, to include conspiracy and numerous tax evasion crimes. Gates’s fate is not yet known, but we do know that he has not spent time languishing in a jail or prison after he was charged, unlike Reality, who is now on day 568 behind bars.

Then Manafort. Despite having the financial means, connections, multiple passports, and experience traveling to other countries — at levels that far exceeded Reality’s — Manafort was allowed to remain out of jail on bond. Manafort’s bond was revoked only when he was accused of tampering with witnesses, and even then he seemed to be getting preferential treatment — until a judge transferred him to a “real” jail. Manafort was convicted of eight crimes and then entered into a plea agreement in another case. That plea was later revoked, after he was accused of lying to prosecutors.

Last year, on December 18, 2017, as the court allowed Manafort to travel to the Hamptons to celebrate Christmas, our family celebrated that Reality had been given fresh fruit, a gift from a local church, and the very first fresh anything since her arrest on June 3, 2017.

Next comes Papadopoulos, who pleaded guilty to lying to the FBI concerning his contacts, during the presidential campaign, with people he believed had connections to the Russian government. He was sentenced to a total of 14 days in prison — and even then tried to get this sentence postponed before spending a mere 12 days incarcerated. What I wouldn’t give to even have Reality released after 12 months.

On to Flynn’s case. A retired Army general, revered and entrusted due to his experience and rank, and put in charge of our national security, Flynn lied about work he did on behalf of the Turkish government, as well as his backchannel communications with the Russian government prior to Donald Trump’s inauguration. He worked for Turkey to try to send a legal U.S. resident, a dissident Turkish preacher, back to Turkey, knowing that this would place the preacher in danger. And Flynn communicated with the Russian government about sanctions placed on them for interfering in the U.S. elections. This Army general should have been facing some very serious charges and consequences, but what is he charged with? Not conspiracy, not espionage — but lying to FBI agents. And, if that does not cause one to gasp, the government is not seeking any prison time! Just this week, Flynn was dressed down by a judge who expressed his “disgust” for the former general’s conduct — but there’s little indication that he’ll receive a hefty sentence.

While I realize that the crime of lying to the FBI may not automatically qualify one for a prison sentence, my outrage on Flynn’s case centers more on what he was not charged with. I would have thought that someone of his rank and position within our government, someone who lied about the lucrative work he had done for one foreign government and contacts with another, would be held to a much higher standard than a 25-year-old veteran airman. Reality is described as an “insider threat” — one who “plainly abused her position of trust” — yet Flynn’s sentencing memos and recommendations paint him in a much better light, resulting in requests for extreme leniency that the judge found so hard to swallow. Reality Winner, charged with leaking U.S. secrets to a news outlet, walks into the Federal Courthouse in Augusta, Ga., on June 26, 2018.

Michael Cohen is next. Cohen acted on behalf of Trump’s presidential campaign and also as his personal lawyer. He arranged what prosecutors said were illegal payments to two women alleged to have had affairs and sexual encounters with Trump. This was done during the campaign to hush the women as their stories were sure to bring negative attention to then-candidate Trump — which also made the payment a violation of federal laws relating to campaign finance.

Cohen was also charged with other crimes — nine total — to include tax evasion and lying to Congress. He pleaded guilty to all those charges and was sentenced to a total of three years in prison with three years’ supervised released. He will not have to surrender himself to begin his prison term until March. It’s difficult to conclude anything other than that Cohen lined his pockets and betrayed our democracy for selfish reasons.

Last, but perhaps not least, in this unfolding tale is Maria Butina, a Russian operative who was arrested for conspiracy to commit crimes against the United States. Though she was not charged as part of the Trump-Russia probe, Butina inserted herself into the National Rifle Association and ran in the top circles of power in U.S. politics. She was said to be facilitating backchannel communications between our leaders and Russia. Butina, at this time, was actively working against the United States.

Last week, she pleaded guilty to a crime of working as a foreign agent in the U.S. She was not charged with and will not be convicted of espionage. Let that sink in. My daughter Reality, who blew the whistle on Russian efforts to attack our election, is the traitor, the one guilty of espionage — but not a Russian agent and those working with her.

I totally understand the need for prosecutors to work with defendants to secure cooperation; incentives are certainly necessary. However, when you consider what this means for those without power or position, like Reality, it is also unjust. Treating Reality as an insider threat and using her and her sentence as a deterrent for others, yet allowing the likes of Cohen, Flynn, Gates, and Butina off easy for much more serious offenses undermines our entire system. It sends the clear message that if you are poor and powerless in this system, you will be abused.

I am outraged. I hope you are too.