The decision concerns a ruling that the NLRB made about who counts as a joint-employer, a question that has been integral to movements like Fight for 15. 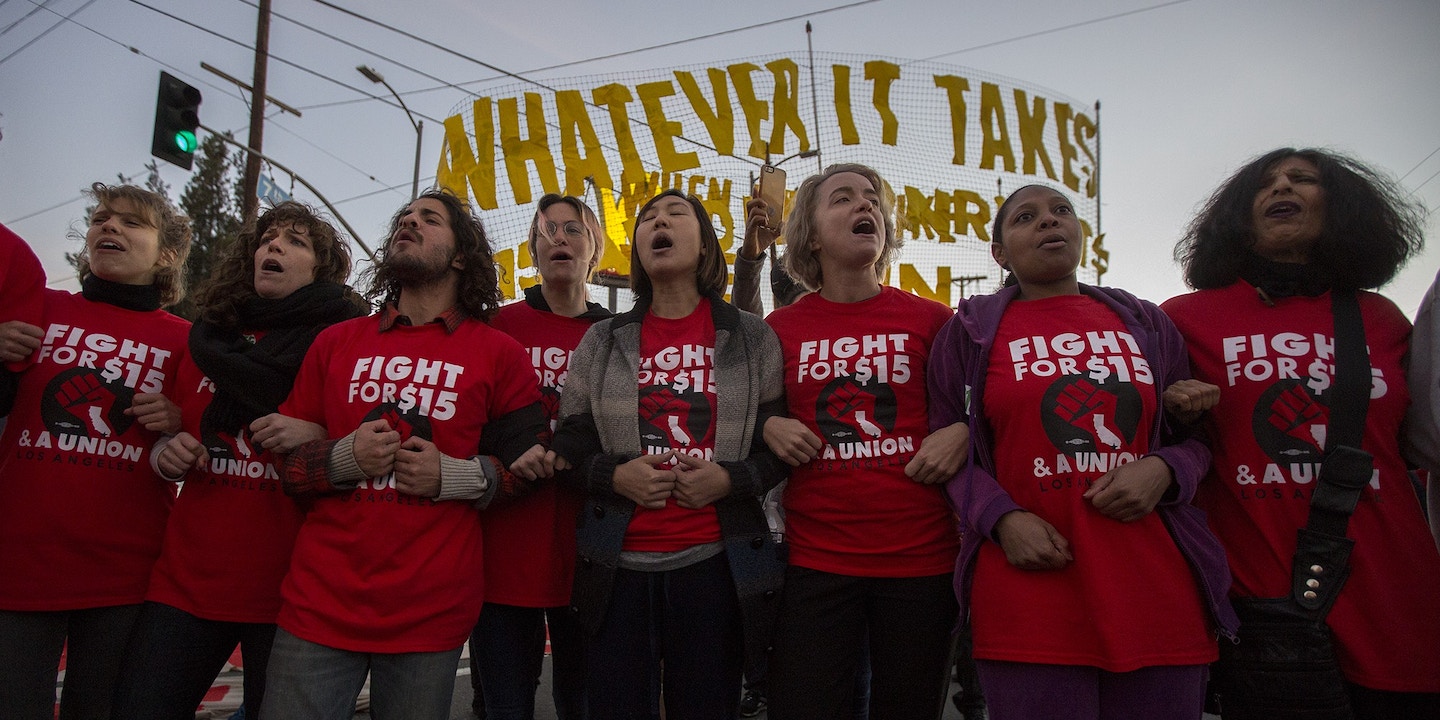 In a major win for labor advocates, a federal court issued a long-awaited ruling last week finding that corporations could be held responsible for issues like wage discrimination or illegal job termination, even if the employees were subcontractors or working at a franchised company. The U.S. Court of Appeals for the D.C Circuit determined that a business could be considered a so-called joint-employer if it exercised a certain level of “indirect control” over employees’ working conditions, or if it reserved the authority to do so down the line. The question of who counts as a joint-employer has been integral to movements like Fight for 15, which aims to organize fast-food workers who toil away in franchised businesses.

In its decision, the D.C appellate court affirmed one of the most significant and disputed labor rulings of the Obama administration. In 2015, the National Labor Relations Board ruled that companies and franchisers with both “indirect and direct control” of employees could be held liable for labor violations committed by contractors or franchisees. The line between direct and indirect control is somewhat murky, and precisely defining it has been a matter of fierce debate, but ultimately it concerns how much authority a company has over the “essential terms and conditions of employment.” Prior to this, only employers with “direct control” could be held responsible, a standard that effectively exempted businesses that hired workers through intermediaries from most labor law. “With more than 2.87 million of the nation’s workers employed through temporary agencies in August 2014, the Board held that its previous joint employer standard has failed to keep pace with changes in the workplace and economic circumstances,” the NLRB said at the time.

The case centered on a California business known as Browning-Ferris Industries of California Inc., which operates one of the world’s largest recycling plants. Browning-Ferris contracts with a second company, Leadpoint Business Services, to provide Browning-Ferris with employees who clean and sort recycled products, among other things. In 2013, a union petitioned the NLRB to represent Leadpoint Business Services workers, with Browning-Ferris named as a joint-employer, on the basis that the latter also controls the contractors’ wages and working conditions. Using its new, expanded joint-employer test, the NLRB ruled in favor of the workers, and Browning-Ferris has been fighting the decision in court ever since. Other major business groups and corporations, including Microsoft, have spoken out vehemently against the new standard.

In the majority opinion, authored by Judge Patricia Millett, the D.C. appellate court said that common law “permits consideration” of indirect control when determining joint-employer status, but it found that the NLRB needed to further revise its two-part joint-employer test to pass legal muster. The court sent the case back to the NLRB to fix it.

The appellate decision throws a big wrench into business groups’ plans to overturn the joint-employer standard. It also significantly constrains what the Republican-controlled NLRB can do to curtail labor rights going forward. The Trump administration, which has argued against expanding the meaning of joint-employers to include those who have indirect control over workers, will now have to comply with the court ruling.

“The court is very clear that the determination of who is an employer is a legal question, not a policy question,” said Sam Bagenstos, a University of Michigan law professor. “And for this question, which is determined by common law, the courts decide that without giving any particular deference to the NLRB. That’s a huge victory for those who want a constrained Trump-era NLRB.”

The decision also holds implications for movements like Fight for 15. Labor advocates have been arguing in court for the last few years that McDonald’s should be held liable as a joint-employer for the fast-food workers who were fired from their jobs when they engaged in nationwide protests for higher pay. An administrative law judge rejected a settlement this past summer, under which McDonald’s would not have been found to be a joint-employer. The company had offered to pay between $20 and $50,000 to individual workers who claimed that they were fired for protesting. If McDonald’s is ultimately declared a joint-employer, the road to unionizing its employees would also be made far easier.

Business groups and conservatives have made overturning the expanded joint-employer standard a top priority. After Donald Trump appointed two pro-business attorneys to the five-member NLRB, the board quickly issued a 3-2 ruling in December 2017 overturning the Browning-Ferris decision. The new case, known as Hy-Brand, reverted the standard back to the old way of doing business, and the decision was celebrated by industry groups. “The 2015 Browning-Ferris ruling stacked the deck against small businesses and inserted uncertainty into day-to-day operations,” said a spokesperson for the National Restaurant Association at the time. “[Hy-Brand] restores years of established law and brings back clarity for restaurants and small businesses across the country.”

But the victory for business groups was short-lived. In an unexpected and dramatic turn of events, the NLRB Inspector General issued a report two months later finding that one of the NLRB board members, a Trump appointee named William Emmanuel, should have recused himself from the Hy-Brand vote due to a potential conflict of interest. Emmanuel’s old law firm had represented a contractor for Browning-Ferris. Had he recused himself, the vote would have been 2-2, leaving the Obama-era joint-employer standard in place.

Within weeks, on February 26, 2018, the NLRB threw out its Hy-Brand ruling on ethics grounds. A former NLRB chair told Bloomberg at the time that he believed such a move was unprecedented. “There is no decision on a matter of such high import that has been vacated based upon a breach of conflict-of-interest rules,” he said.

The NLRB went back to the drawing board to craft a new rule to reverse the Browning-Ferris standard. In mid-September, it published its new proposed rule, one in which “indirect influence … would no longer be sufficient” to establish a joint-employer designation. The board claimed in doing so, they would be promoting “predictability, consistency, and stability” for businesses.

In mid-December, the NLRB’s general counsel, a Trump appointee named Peter Robb, submitted a comment on the NLRB’s proposed rule, arguing that the board’s significantly curtailed standard still didn’t go far enough and should be even more favorable to businesses seeking to avoid joint-employer status.

The opportunity to offer public comment on the rule is open until January 14, and as of January 1, more than 25,000 comments had been submitted.

The appellate court decision could have implications for the new rule as well. “I think it’s really hard to see how the board goes forward with its proposed rule now,” said Sharon Block, executive director of the Labor and Worklife Program at Harvard Law School. “I think there’s a lot that’s not consistent with the majority opinion. I think the board needs to be thinking seriously about pulling back the proposed rule, or at the very least, putting the pause on to think about the implications of the D.C. Circuit decision.”

Block describes the appellate court’s decision as “not a perfect decision, but a pretty good decision” because it validates the NLRB’s Browning-Ferris ruling to take into account indirect and reserved authority when determining who counts as an employer.

Bagenstos, of the University of Michigan, said there are some real challenges with relying on old legal doctrine to address modern workplace challenges, but he said the court’s opinion “gives a pretty strong statement” that many problems with the fissured workplace can be addressed in the confines of existing law. “The Trump administration will have real issues getting around that,” he said. The standards set forth by Browning-Ferris are not codified by law, but with Democratic control of the House, it is an issue that pro-labor lawmakers could foreseeably take up.

Spokespeople for the NLRB and the National Restaurant Association did not return requests for comment.

Some business groups have also expressed interest in bringing these issues to Congress, but their attempts so far to reverse the Browning-Ferris standard through legislation have been unsuccessful. In 2017, the House passed the so-called Save Local Businesses Act, which would have done just that, but the bill has stalled in the Senate.

“The unfortunate twists and turns continue for franchise owners in this ongoing saga,” said Matt Haller, senior vice president of public affairs for the International Franchise Association, in a statement to The Intercept. “If the second-highest court in the land can’t interpret how the Obama NLRB intended for their convoluted joint employer standard to be applied, how is a small business owner supposed to figure it out? This underscores the need for rule-making or a legislative solution to clear up the uncertainty facing America’s 730,000 franchise small business owners and their employees.”