1.4 Million Floridians Get Their Voting Rights Back Today, Whether Republicans Like It or Not

Some Florida Republicans, including Gov.-elect Ron DeSantis, have sought to sow confusion about the validity of Amendment 4, which goes into effect Tuesday. 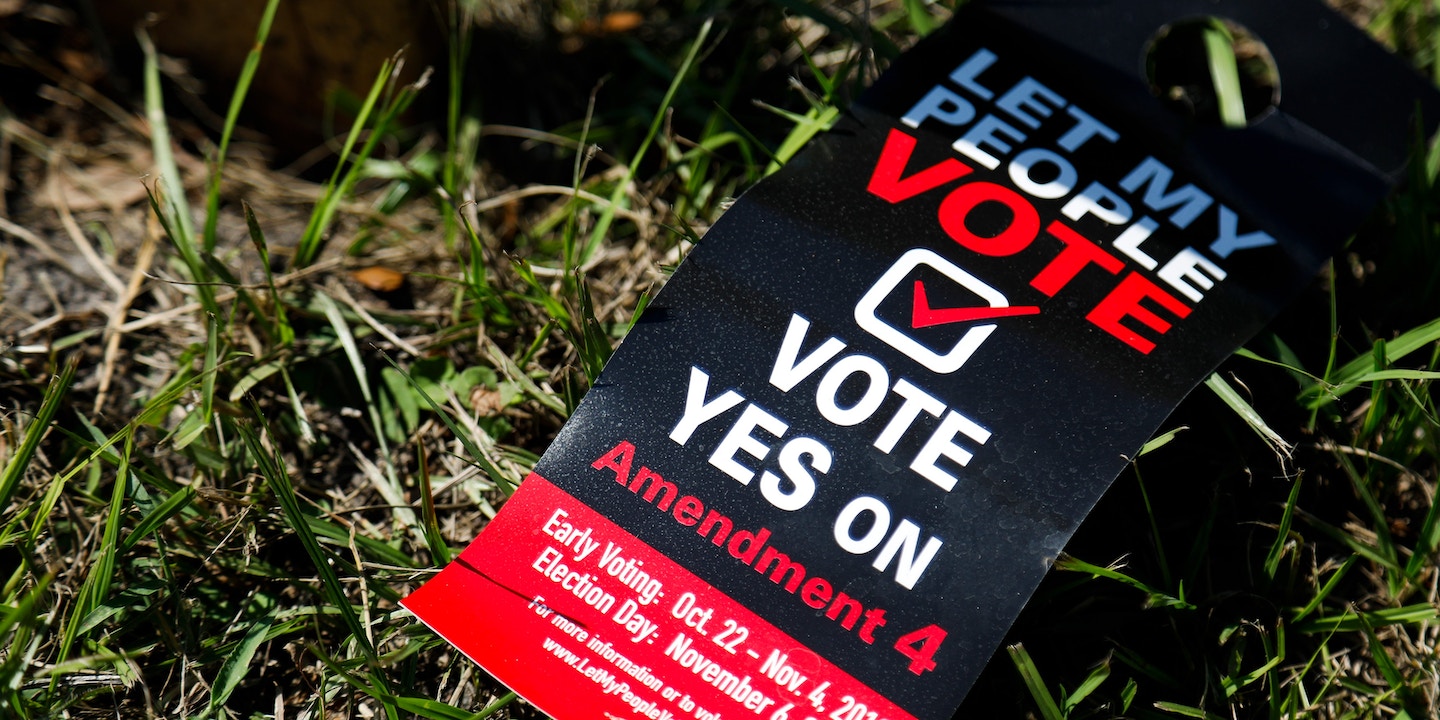 More than 1 million Florida residents will become eligible to vote on Tuesday as the newly amended state constitution restores voting rights to most of its previously disenfranchised felons. That’s the largest number of people to gain access to the ballot all at once since American women won the right to vote in 1920.

Last November, Florida residents voted in favor of an amendment to the state constitution, known as Amendment 4, that restores voting rights to roughly 1.4 million felons in the state who have completed their sentences. (Individuals convicted of murder or sex offenses were excluded from the amendment.) But while the measure was approved by nearly 65 percent of the state’s voters, some Republicans — including Gov.-elect Ron DeSantis — have sought to sow confusion about its immediate validity.

DeSantis, who opposed the amendment during the campaign, indicated that its implementation would be delayed until lawmakers can write it into law during the next legislative session. “They’re going to be able to do that in March,” he told the Palm Beach Post. Some local elections in Florida are scheduled for as early as February, before the next legislature meets.

DeSantis’s comments followed slow-walking on the amendment by other state officials, like Ken Detzner, the Republican secretary of state, who indicated in December that he believed the ballot language was unclear and would require state legislators’ review. “We need to get some direction from them as far as implementation and definitions — all the kind of things that the supervisors were asking,” Detzner said then. “It would be inappropriate for us to charge off without direction from them.”

Lack of direction from the state department — and from exiting Gov. Rick Scott — also led to confusion among election officials across the state, with the Division of Elections director saying that “the state is putting a pause button on our felon identification files . … We need this time to research it, to be sure we are providing the appropriate guidance.”

Asked for clarification, the Florida Department of State sent a somewhat equivocal statement to The Intercept, noting both that the amendment is now officially law and that the department would follow the legislature’s directive — a seeming contradiction. “Unless otherwise specifically provided for elsewhere in this constitution, if the proposed amendment or revision is approved by vote of at least sixty percent of the electors voting on the measure, it shall be effective as an amendment to or revision of the constitution of the state on the first Tuesday after the first Monday in January following the election,” a spokesperson for the department wrote, citing the state constitution. But then she added, “The Florida Department of State will abide by any future direction from the Executive Clemency Board or the Florida Legislature regarding necessary action or implementing legislation to ensure full compliance with the law.”

That ambiguity, critics say, is deliberate and unnecessary. The amendment’s language makes clear that the change is self-executing, meaning that it became part of the state constitution the moment it won voters’ support and that it must be implemented without delay or legislators’ input. The amendment’s language was cleared by the state Supreme Court before the vote, and supporters collected more than a million signatures to get it on the ballot.

“It was designed so that there would be no requirement for involvement by any legislators, politicians, the governor, or anyone,” said Melba Pearson, deputy director of the American Civil Liberties Union of Florida, one of the groups that drafted the amendment. “There is no role for the governor or any legislator in this amendment. Their only role is to make sure that the constitution is upheld and that the will of the voters is respected.”

Republicans’ belated questions about the amendment’s clarity and immediate validity were met with a barrage of criticism and stinging rebukes from many of the state’s editorial boards. “About the only thing worse than making a mess is making a mess unnecessarily,” a columnist for the Palm Beach Post wrote. “But here we are anyway, because Secretary of State Ken Detzner — who reports to Scott and whose department oversees statewide elections — won’t do his job.”

Andrew Gillum, who lost to DeSantis in November by a narrow 33,000 votes, also slammed officials who are creating unnecessary obstacles to the amendment’s implementation. “The people spoke & voted for #Amendment4 with an overwhelming majority,” he tweeted in December. “Those who fight the will of the voters are fighting democracy itself.”

The backlash only intensified after DeSantis’s comments added fuel to the confusion — an unsubtle effort at intimidating newly eligible voters, critics said.

“The reality is even though he does not agree with the amendment, it is his duty as the governor, the incoming governor of the state, to uphold the will of the people. Period, end of story,” said Melba. “Amendment 4 is now law in the state of Florida, so he needs to uphold it as is. Politicians or elected officials don’t get to pick and choose in that manner.”

Melba called on all new eligible voters to register on Tuesday and invited anyone experiencing issues to report them on the ACLU’s website. She said she hoped that no obstruction would arise to warrant litigation, but that the group was “prepared for the worst. … No options are off the table.”

Groups of formerly incarcerated “returning citizens” who drove the effort to pass the measure will be out on the streets once again this week, this time to register new voters, and several groups would run voter education campaigns, Melba added. “All people need to do on January 8 is register to vote, either online or at their local Supervisor of Elections office in their county,” she said. “There’s nothing confusing about it.”

A spokesperson for DeSantis, who is also to be sworn in on Tuesday, did not respond to a request for comment, but his office told other publications that “the Governor-elect intends for the will of the voters to be implemented but will look to the Legislature to clarify the various questions that have been raised.”

Before the amendment passed, Florida was the largest of three states that disenfranchised felons for life. As The Intercept reported in November, 1.68 million residents of the state were ineligible to vote because of a felony conviction: 10 percent of the state’s adult population and 1 in 5 African-Americans. Across the country, more than 6 million people can’t vote because of felony convictions, though most states restore voting rights at some point between release and the end of probation.

In Florida, a regular swing state where it’s not unusual for elections like DeSantis’s to be decided by extremely narrow margins, many believe that re-enfranchising felons has the potential to significantly tip the state’s political scales. But those who led the yearslong effort to pass Amendment 4, and particularly a diverse coalition of individuals with felony convictions, rejected the politicization of their effort and noted that the issue impacted people across the state and the political spectrum.

“We are not pawns for any partisan gamesmanship, we’re not pawns for any partisan bickering,” Desmond Meade, president of the Florida Rights Restoration Coalition, told The Intercept. “We are human beings, we are people over politics. And we are citizens of the state and of this country that want to be able to participate in the democratic process without being set up like we’re just a token for a political party.”

Meade, one of the earliest leaders of the voter re-enfranchisement movement in the state, said he would finally register to vote on Tuesday.

“And when I go to register, I’ll be doing so under the authority of the highest law in the state of Florida, and this law is over any legislature, it’s over any political or public servant,” he added. “We’re going forward fully expecting that every public servant that serves the systems of Florida is going to number one, respect the rule of the law, and number two, respect the wishes of its citizens.”