Jon Kyl returned to his lobbying firm Covington & Burling a week after ending his brief tenure as a U.S. senator from Arizona. 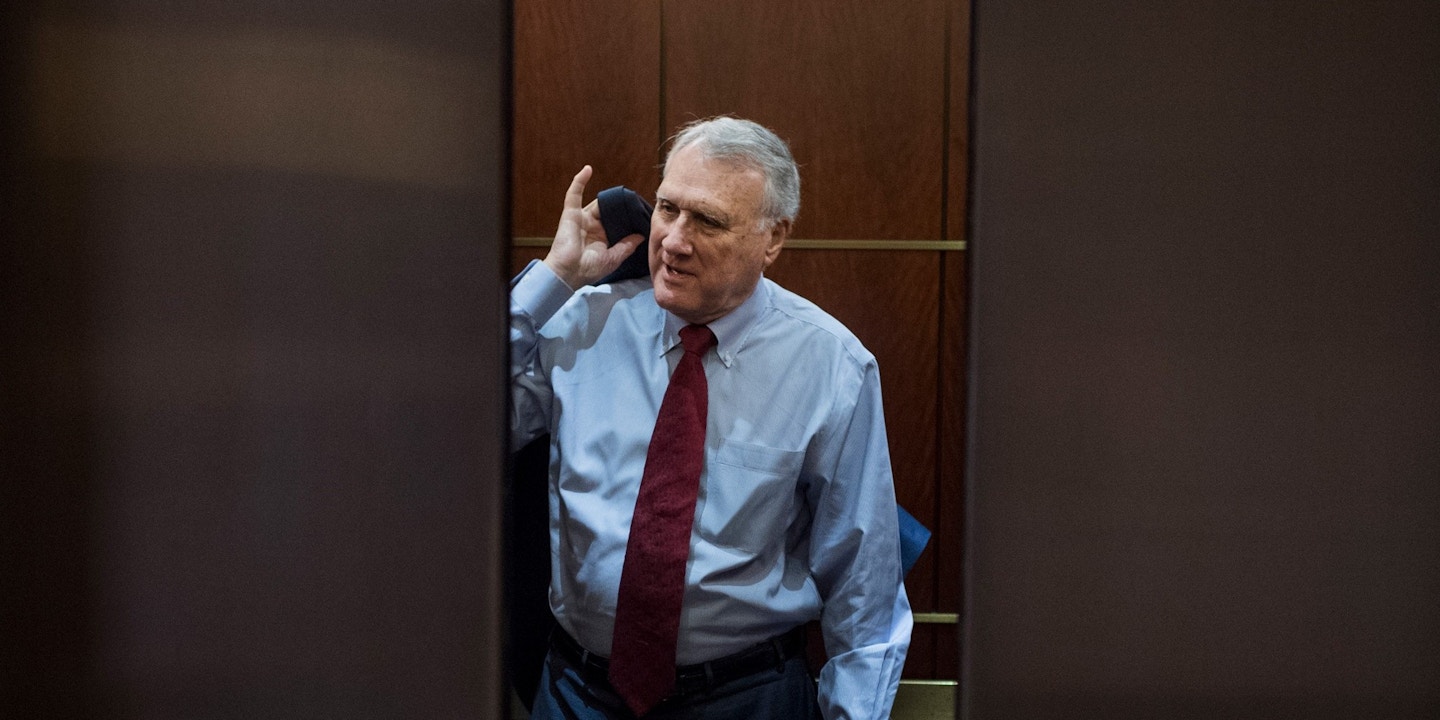 Republican Jon Kyl, whose second Senate tenure concluded on December 31, is keeping secret nine clients he advised while working at a powerful corporate lobbying and law firm in 2017 and 2018. Kyl was supposed to reveal the clients in his mandatory Senate financial disclosure, but he cited a D.C. bar rule to keep them confidential.

Kyl, a longtime U.S. senator who became a corporate lobbyist at Covington & Burling after retiring from politics in 2013, served as a temporary replacement for the late Arizona Sen. John McCain from last September until the end of 2018. Critics have charged that Kyl returned to the Senate temporarily to refresh his contacts and gain clout from the inside, only to then spin back out to influence the institution.

On Monday, Covington & Burling announced that Kyl would return to his lobbying job, swinging through the revolving door only one week after leaving the Senate. “Given his profile and depth of experience in Washington, we expect he can make important contributions in a range of matters, particularly for clients in the technology, life sciences, and defense sectors who may face numerous policy challenges in Congress and the executive branch,” said Timothy Hester, Covington’s chair, in a statement. Kyl cannot lobby former colleagues directly for two years due to Senate ethics rules, but he can provide behind-the-scenes advice for corporate clients.

Kyl’s annual disclosure was due September 28, a few weeks after he was sworn in. But he got a 90-day extension, and he waited until the last possible day, January 3, to file the form. By this time, he had left the Senate and was replaced by Martha McSally. It’s unclear whether anyone in government will now demand that Kyl release the names of the clients. However, some experts believe the public has a right to know, a belief made even more urgent with Kyl’s speedy return to lobbying.

“Without knowing who has paid his way until he joined government service, we can’t ascertain what his conflicts might have been while in office,” said Delaney Marsco of the Campaign Legal Center, a Washington-based watchdog group. “Even though he’s no longer a senator, it’s important for the public to have this information.”

The disclosure form Kyl filed last week indicates that he earned $1,859,852.82 at Covington & Burling in 2017 and 2018, and it names 23 lobbying clients from whom he earned $5,000 or more in those years. These clients were mostly already known, because as a registered lobbyist, Kyl was required to disclose formal actions taken to influence Congress on behalf of clients.

Kyl added in the comments of the form, “The identity of 9 clients is withheld.” He would have been required to disclose the names of clients for whom he worked as an official registered lobbyist, but he could have operated in a “shadow lobbying” capacity for those unidentified clients, doing behind-the-scenes consulting, or directing a team that was officially lobbying for the client.

Kyl claims on the form that he can conceal the names of the nine clients “under Rule 1.6 of the DC Bar Rules of Professional Conduct.” This rule states that a lawyer “shall not knowingly reveal a confidence or secret of the lawyer’s client,” or information that “would be embarrassing, or would be likely to be detrimental, to the client.” Kyl has interpreted that to allow him to withhold even the name of the client, on the grounds that it’s protected under attorney-client privilege.

The Ethics in Government Act of 1978 requires senators to submit annual financial disclosures, and whether an exemption could apply in Kyl’s case is murky legal territory.

The Office of Government Ethics, in its guidance to members of Congress on disclosures, does say that in “rare cases” members can keep the names of clients confidential, including if “disclosure is prohibited by a rule of professional conduct that can be enforced by a professional licensing body.” That would include Rule 1.6. The OGE adds that the filer must “demonstrate persuasively that the client is a ‘confidential client,’” adding that “it is extremely rare for a filer to rely on this exception for more than a few clients.” Kyl is using the exception for nine clients.

There is, however, an exception to Rule 1.6 that allows lawyers to reveal information about clients when “required by law or court order.” Because Senate financial disclosures are required by statute, that exception could theoretically apply in this case.

“Between a D.C. bar rule and a federal financial disclosure, the financial disclosure wins out,” said Kathleen Clark, a law professor at Washington University in St. Louis, who specializes in government ethics. “Other lawyers disclose the identity of clients unless the information is protected, like if if it’s part of a confidential government investigation. But the bottom line is, unless the information is protected, he has to disclose it.”

Marsco, of the Campaign Legal Center, agreed. “In Senate financial disclosure instructions, the name of a client of a law firm is generally not considered confidential,” she explained.

These questions of interpretation take on less urgency now, given that Kyl didn’t have to file the disclosure until after he left Congress. The larger issue is that any actions that Kyl took during his temporary gig in the Senate were made without an understanding of these relationships. Kyl did not respond to a query sent to his Covington & Burling email address.

Kyl’s work on the Senate Armed Services Committee could have conflicted with his prior lobbying for Northrop Grumman. In his short stint in the Senate, he voted against the resolution to end military activities in Yemen and voted for the $674 billion Defense Department appropriations package. During that time period, Kyl also co-authored an op-ed in the Washington Post advocating for the building of low-yield nuclear warheads, which a defense contractor like Northrop Grumman could build.

The legislative record from Kyl’s four months in the Senate is thin, and what he did in a nonpublic capacity that would either directly assist former clients or acquire information that could assist them in the future is hard to know. And it’s made infinitely harder by the lack of transparency surrounding the nine clients Kyl won’t disclose.

The question is how that information can now be released. The Senate Select Committee on Ethics administers the chamber’s financial disclosures. The committee would have the authority to act if there were an error on the disclosure, like an improper confidentiality of clients. But it’s unclear whether or how it would do so, even to the experts. The Senate Ethics Committee, chaired by Sen. Johnny Isakson, R-Ga., did not respond to a request for comment.

“I wouldn’t have been surprised if Kyl hadn’t filed at all, because what is the recourse?” asked Clark. “I don’t know that the House or Senate has been robust in its enforcement activities, especially against former members.”

She added, “Welcome to congressional ethics.”