Child sex trafficking victim Cyntoia Brown’s case shows us who gets to stand their ground — and who does not. 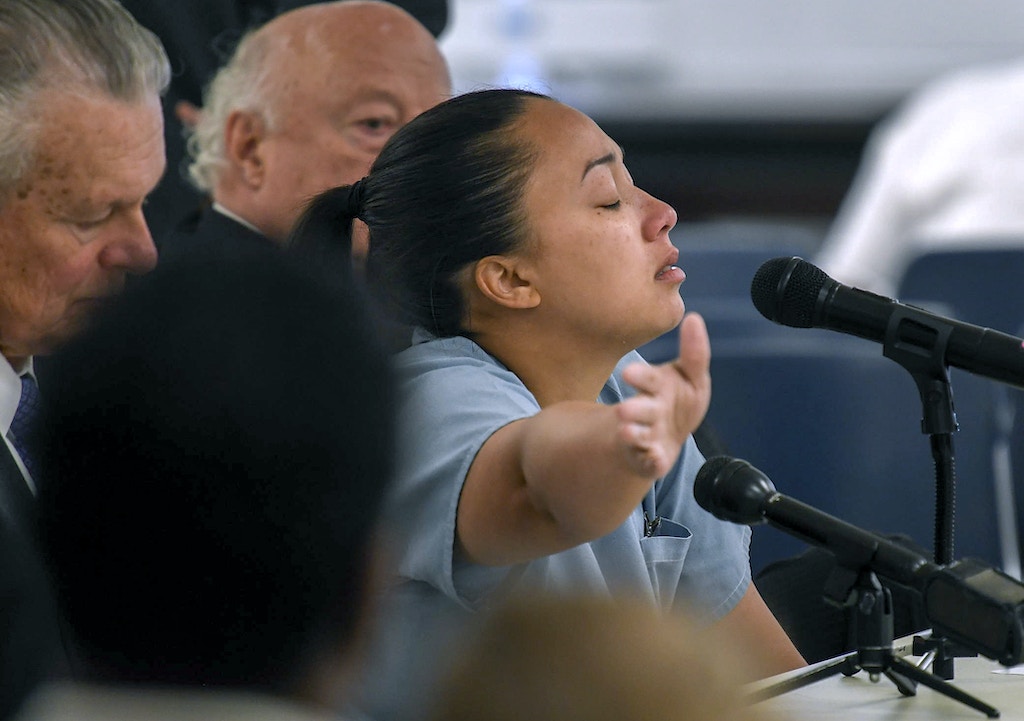 Cyntoia Brown sits between council during her clemency hearing at the Tennessee Prison for Women in Nashville, Tenn., May 23, 2018.

Tennessee Gov. Bill Haslam this week granted clemency to Cyntoia Brown. After serving 15 years of a 51-year murder sentence for killing a man in self-defense, Brown, now 30, will be released to parole supervision in August. Haslam’s decision offers necessary relief, but this should not be confused with justice.

In 2004, 16-year-old Brown was in an abusive relationship with a man who forced her to sell sex. On an August night, she was picked up by a john who took her to his home, assaulted her, and threatened her life, while showing her his multiple guns. In self-defense, Brown shot the 43-year-old white man and fled with money and two guns. She was tried as an adult, convicted of first-degree murder and aggravated robbery, and sentenced to life.

Brown’s case, even her clemency, reminds us of who gets to stand their ground — and who does not.

Following tireless work by Black Lives Matter and other activists in Nashville, Brown’s case made headlines in 2017 after it garnered the attention and advocacy of celebrities, including Rihanna and Kim Kardashian West. As such, Brown’s release is a testament to the importance of mass public pressure. But much of the support for Brown, and the framing of the clemency itself, focused on her position as a child victim of sex trafficking. While understandable as a narrative that earns public sympathy, it misses the possibility that Brown’s alleged offenses be seen as justified acts of self-defense and survival, which needn’t be predicated on her position as a teenager or a victim of coerced sex trade. Her acts of self-defense would have been valid had she been an adult and engaged in the sex trade consensually. Brown’s case, even her clemency, reminds us of who gets to stand their ground — and who does not.

Haslam’s welcome commutation announcement recognized that Brown’s case is “tragic and complex,” but in no way gave credence to the possibility that she acted in justifiable self-defense. “Cyntoia Brown committed, by her own admission, a horrific crime at the age of 16,” the Republican governor said on Monday. “Yet, imposing a life sentence on a juvenile that would require her to serve at least 51 years before even being eligible for parole consideration is too harsh, especially in light of the extraordinary steps Ms. Brown has taken to rebuild her life.” The suggestion, then, is not that the conviction was wrong, but the sentence too harsh given Brown’s age at the time and that while incarcerated, Brown has proven herself worthy.

Rallying for her freedom, Brown’s supporters argued that she has been a model for incarcerated people: She has earned an associate’s degree, is working toward her bachelor’s degree, and works with a program to counsel at-risk young people in Tennessee. All of that is impressive, but none of it would need to be relevant had a life like Brown’s been considered worthy of self-defense in the first place. Tennessee is a “stand-your-ground” state, in which under law a person does not have to retreat in order to use force to defend themselves. Yet the de facto application of self-defense legislation nationwide consistently fails to protect people of color, especially those in the sex trade (whether coerced, as in Brown’s case, or not).

The travesty is not (only) that Brown was so young, but that lives like hers are systematically treated as unworthy of defense.

A 2013 paper from the Urban Institute that analyzed FBI data found that in stand-your-ground states, the use of the defense by white people in the shooting of a black person is found to be justifiable 17 percent of the time, while the defense when used by a black person in the shooting of a white person is successful 1 percent of the time. These are infirm laws, which serve to legitimize racist fear; just look at George Zimmerman’s successful defense of his execution of the black teenager Trayvon Martin. Stand-your-ground defenses are also denied if the allegedly defensive force is used in the context of committing a crime; as such, there is no hope that such laws will ever fairly deliver the right to self-defense for women in the sex trade, forced by coercion or the need for survival, into illegal work. The travesty is not (only) that Brown was so young, but that lives like hers are systematically treated as unworthy of defense.

“If you look at Cyntoia’s original transcripts, they are peppered with the phrase ‘teen prostitute,’” Derri Smith, founder and CEO of nonprofit End Slavery Tennessee, told CNN. “Well we know today there’s no such thing as a teen prostitute.” As a point of law, Smith is right: All underage sex workers are defined as trafficking victims. But, once again, we shouldn’t hypothetically re-litigate Brown’s right to self-defense on the condition that she was a child trafficking victim rather than an adult prostitute; the former position should not be the only grounds for justified survival.

As social justice organizers and educators Mariame Kaba and Brit Schulte wrote of Brown’s case for The Appeal in 2017, we shouldn’t need to narrativize survivors as “perfect victims” in order to demand justice. “She has her own story to tell, but by portraying her as a victim without agency, some of Cyntoia’s advocates make it more difficult for her story of self-defense, her fight to survive, and her resistance to violence to be respected,” Kaba and Schulte wrote. “We need to find a way to describe all of her realities — both as a survivor of violence with the right to defend herself, and as a young woman who was doing her best to survive.”

In their excellent new book, “Revolting Prostitutes: The Fight for Sex Workers’ Rights,” writers and sex workers Juno Mac and Molly Smith highlight numerous cases in which both coerced and consenting individuals in the sex trade have faced harsh sentences for defending themselves against abusive clients. They highlight the cases of consenting sex workers like GiGi Thomas, a black transgender woman, and Alisha Walker, a black cisgender woman, who have each been “brutally punished for desperate, panicked acts of self-defense, for the preservation of their own lives.” Walker is serving 15 years for killing a client who came at her with a knife; Thomas currently faces murder charges in an ongoing case. As Smith and Mac note, “The criminalization of prostitution robbed them of their right to safety, and the treatment of black and trans women in the US ‘criminal justice’ system — a system never built to deliver justice for women like GiGi and Alisha — robbed them of their right to self defense and their right to freedom.”

I’m not attempting to equate Brown’s case with that of Walker’s or Thomas’s or any other survivor. Nor am I diminishing the difference between consensual and coerced sex work, as anti-trafficking narratives are wont to do. I have written elsewhere, alongside numerous sex workers and activists, that criminalization of the sex industry only furthers the likelihood that sex workers — working to survive — will end up in dangerous, exploited, coerced, and potentially deadly circumstances. The injustice of Brown’s incarceration was not solely located in the fact of harshly punishing a child who had been forced into sex work. Brown’s life was per se worthy of defense and preservation, and so too are those of Walker and Thomas and so many others deemed marginal and disposable by our carceral state. If a victim and survivor like Brown must ask for mercy in the absence of justice, we have a long way to go.