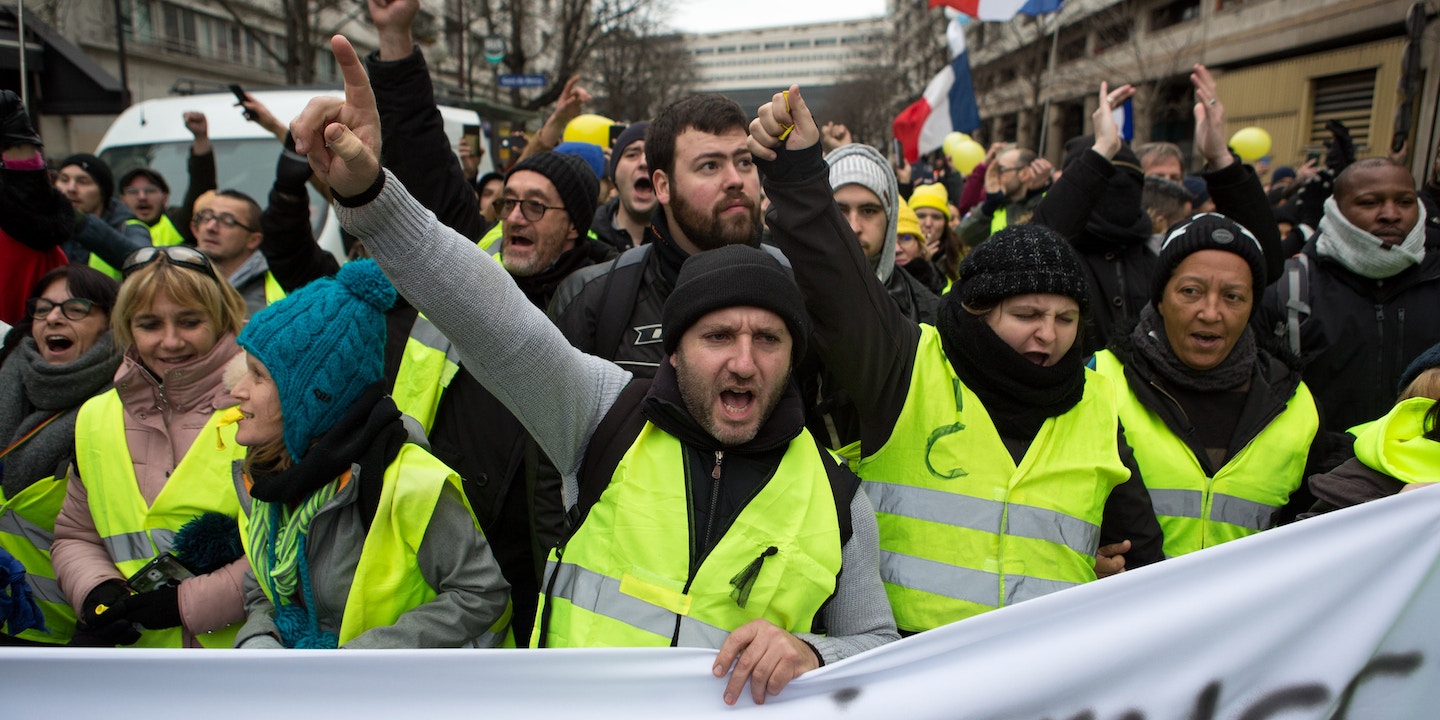 Last November, the French started a new Saturday tradition: “Gilet jaune” protesters wearing yellow safety vests started to take to the streets by the tens of thousands in the morning, shouting slogans against the high cost of living, against French President Emmanuel Macron, and against his detested taxes and social service reforms.

By the afternoon, the protesters would clash with riot police, who would fire round after round of tear gas and flash balls to disperse them. By dusk, protesters would break windows of bus stations and storefronts, and sometimes light cars on fire before fleeing when the cops came. And from the middle of the night into the morning, the other “gilets jaunes” — street cleaners, often immigrants, who also wear the safety vests — would clean up the mess.

This past Saturday, some 8,000 protesters showed up for “Act 9,” or the 9th week, of protests, marching from Bercy in east Paris to the Arc de Triomphe in the west of the city, in an attempt to reach the Champs-Elysées. At least 85,000 rallied across France, marking the second straight week that turnout for the yellow vest protests increased following a dip during the holiday season. “I’m here because I’m a single mother, and I’ve been working for 20 years,” explained Stephanie, a 40-year-old public sector worker who marched in Paris. “After I pay my bills at the end of the month, I can’t even take my daughter out to the cinema,” she said. Gilet jaune protesters get hit by a police water cannon during a protest in Paris on Jan. 12, 2018.

Photos: Joe Penney for The Intercept

The strength and endurance of the movement, which has no set structure, no clear leadership, and no political or institutional affiliation, has taken everyone by surprise, not least Macron. Since the first protest on November 17, the gilet jaune protests have eroded Macron’s ability to carry out planned reforms to taxes and social services, and have seriously damaged his public image. They represent the biggest threat to his popularity, his capacity to govern, and the centrist European liberalism he has become the global spokesperson for in the Trump era. Yet while the potency of the gilet jaune protests is undeniable, the danger is that the far right could emerge victorious in the battle over the movement’s political identity.

Macron rose to power by bypassing established political parties. His La République en Marche party was created in 2016 and won a majority of seats in the parliament just one year later, rendering the traditional parties of the left and right spent forces. This means that the two major opposition parties in French politics are now Marine Le Pen’s far-right National Rally and the far-left Unbowed France, both of which have the most to gain from the collapse of the center. While Le Pen hasn’t made too many public comments about the protests, support for her party has risen to the top of the polls for the upcoming European parliamentary elections, at 35 percent. On the other hand, Jean-Luc Mélenchon, the leader of Unbowed France, has aggressively courted the protesters, but has dropped in the polls, suggesting that the gilet jaune movement, which is most popular in more rural areas where far-right support is high, is more of a boon for Le Pen than anyone else.

The battle over the gilets jaunes and the weakened French center has major consequences for populist parties on the left and right throughout Europe; workers and politicians across the continent are staking their claims. The Italian interior minister and deputy prime minister have praised the protesters, and Russian media outlets like Russia Today and Sputnik News have given them wall-to-wall coverage. Yellow vest protests have sprung up in Belgium, Croatia, Ireland, and the Netherlands. Far-right groups in the U.K. have attempted to appropriate the movement for themselves, and marched in London on Saturday. 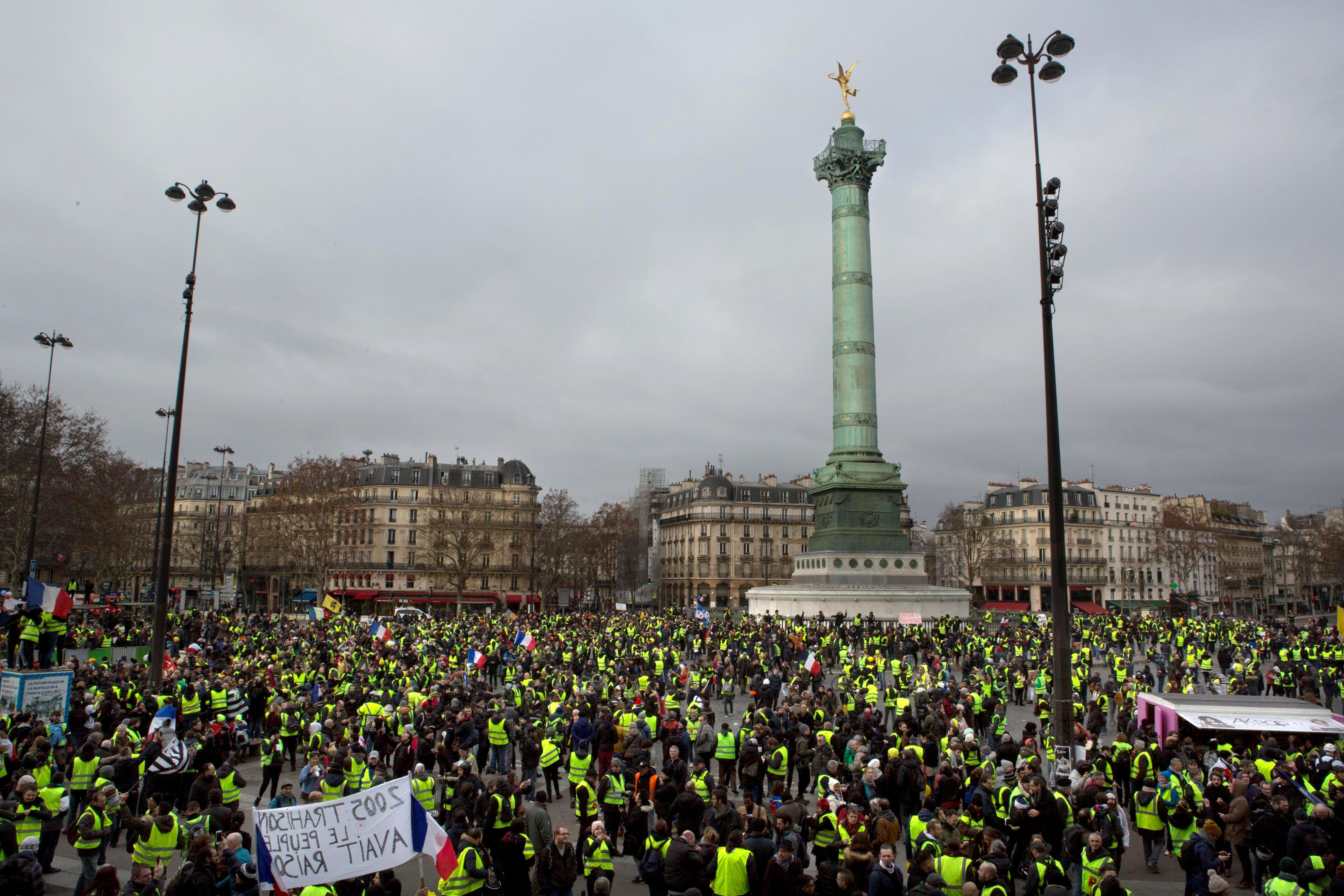 The first gilet jaune protest was launched on Facebook as a response to a carbon tax that hiked the price of diesel fuel, a major source of frustration for people living in areas not served by public transport. The movement took the yellow safety vest, required in all road vehicles, as its symbol, and had support from Marine Le Pen sympathizers whose stated goals included “Frexit” — France leaving the European Union — and a stop to immigration. As the movement grew, its base diversified, and so did its goals. “We thought it was a movement instrumentalized by the far right,” said yellow vest supporter Abdel Moula Elakramine, a 52-year-old warehouse worker and father of three, who is also a member of Unbowed France in Bobigny, a Parisian suburb. “It’s not true. The poor are on the far right, the far left — they’re everywhere!”

Most major protests in France are called by labor unions or political parties. But a string of tough losses for the unions against the Loi du Travail, a labor reform law that relaxed conditions for laying off workers, as well as a strike by railroad workers against the liberalization of the national rail company, has left little faith in such institutional resistance. In both cases, the labor unions’ months-long battles led to no change in the government’s positions.

The gilets jaunes are unique in their complete rejection of any such affiliation. The closest thing they have to spokespeople are the administrators of popular Facebook pages, like 33-year-old truck driver Eric Drouet and 31-year-old Maxime Nicolle, as well as 33-year-old Priscilla Ludosky, who launched a change.org petition against the diesel tax that has over a million signatures. The protesters are marked by their ambiguity: Anybody can be a gilet jaune, and you can take on and off your vest at any time. 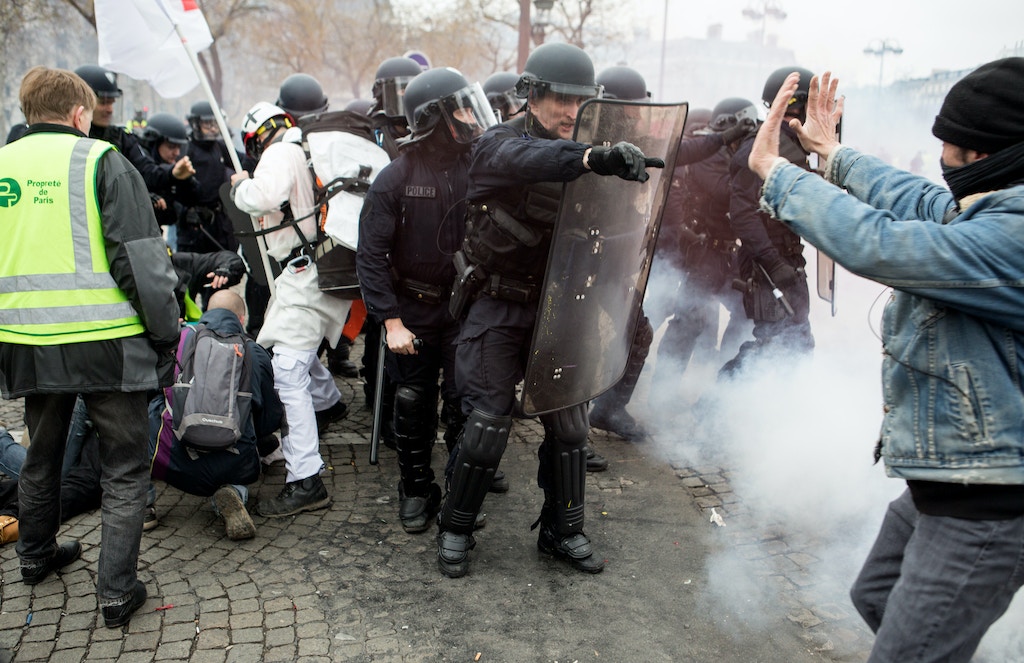 This ambiguity has allowed for more open participation from people who weren’t previously involved in any protest movement, and makes it less predictable and harder for the government to control or negotiate with. It also means, however, that there is no one to claim responsibility for, and to discipline, fellow protesters when they beat up journalists, make anti-Semitic gestures, or harass black drivers. Conspiracy theories are plentiful in the yellow vest Facebook groups, and they often include references to Macron’s past employer, the Rothschild Group — a dogwhistle for anti-Semitism. Outbursts of racism and the protesters’ mainly white composition have put off some activists of color from participating.

The gilet jaune protests are also unique in the intensity of the violence, both from the protesters and the police. At least 10 people have died during protests, mostly from being hit by cars and trucks while blocking the road. December saw protesters building barricades and burning dozens of cars and motorcycles in the street. During the January 5 edition, protesters commandeered a forklift and broke open the office door of Macron spokesperson Benjamin Griveaux, forcing him to flee through the back entrance, while an ex-professional boxer was filmed punching and kicking a gendarme. Some reports have stated that Macron is worried for his personal safety. Protesters attempted to break through police lines that were guarding his home in Touquet in December, and his wife’s family has voiced concerns that their chocolate shop in their hometown, Amiens, will be attacked.

The security forces have often responded to the protests with heavy force. At least a dozen people have lost vision in an eye after being hit by flash balls or tear gas canisters, and more than 80 people have been seriously injured, according to the website CheckNews.fr. An 80-year-old woman in Marseille died after being hit in the face with a tear gas canister. This past Saturday, I saw police in Paris aim at protesters instead of into the air or at the ground. I myself was hit by a tear gas canister in the thigh while not in a crowd, leading me to believe it was intentional. I was carrying two cameras and helmet clearly labeled “PRESS,” and was photographing protesters in an area with few other people around me. The police brutality has led to more of the white French public coming to terms with what people of color experience on a regular basis, argued Almamy Kanouté, an organizer with the Justice for Adama Traoré committee, which was created after the death of 24-year-old black man Adama Traoré in police custody. “It took certain people getting flash balls to the face, beaten with truncheons, gassed, and abused without having committed an act of incivility to find themselves in the experience of excluded people and nonwhites in general,” he explained.

The fear of being targeted by police brutality has also contributed to some black activists and other activists of color expressing reticence to participate. Laurent Lalanne, a social worker from the suburb of Bobigny, said that if black protesters “go to a revolt like that, and go in the front, we will be the first ones targeted.” Lalanne nonetheless supports the movement, because it is fighting for social services. Laurent Lalanne wears a yellow vest at his home in the Paris suburb of Bobigny, France, to show solidarity with the gilet jaune protesters on Jan. 11, 2018.

The protests have had a massive impact on the economy, as well. The country has lost millions of euros in damaged vehicles, storefronts, and more, while police officers’ overtime pay has skyrocketed and international flights to Paris decreased by 5-10 percent in December. The disruption caused by the protests forced 58,000 workers to be laid off, temporarily suspended, or have their hours reduced, according to French Labor Minister Muriel Pénicaud. The government has spent 32 million euros to pay them during their unemployment under a provision in French labor laws.

In his first year and a half in office, Macron passed his liberal agenda by refusing to negotiate with labor unions, and publicly insulted impoverished people multiple times, including telling an unemployed young man that all he needed to do to get a job was to “cross the street.” It is thus ironic that the gilets jaunes have utilized some of Macron’s tactics — bypassing the traditional avenues of resistance, becoming more formidable than any other social movement. 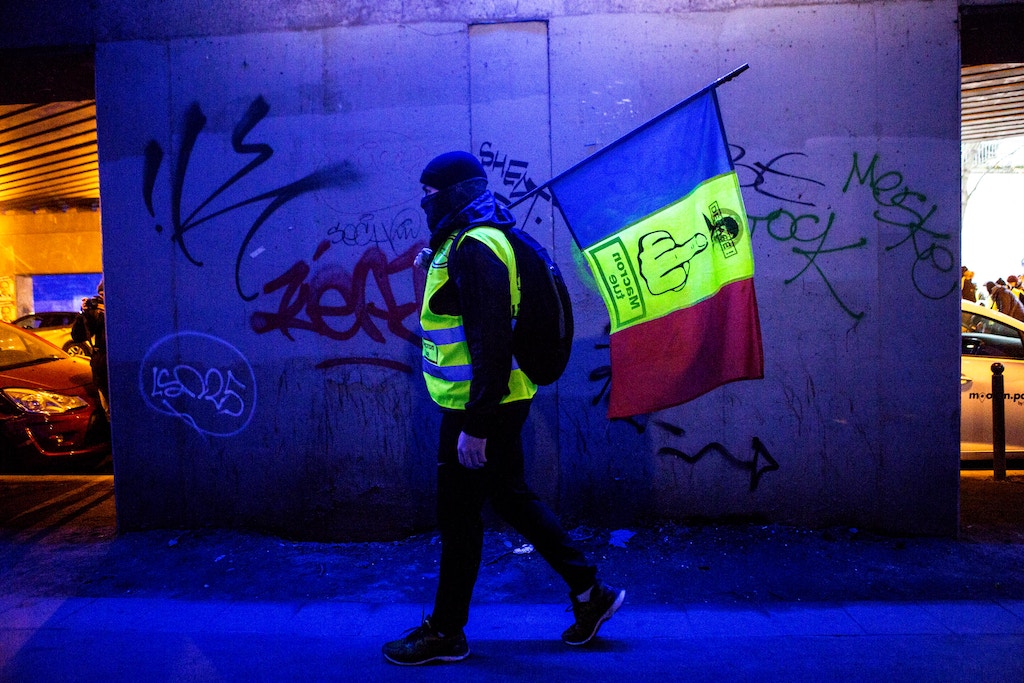 A gilet jaune protester carries a French flag with the words “Macron kills” written on it, in Paris on Jan. 12, 2018.

Macron’s response to the crisis has been to repeal the diesel tax and to promise a host of other reforms, including raising the minimum wage by 100 euros a month. But critics have voiced skepticism about his plans to implement the promised changes, and Macron has tried to take control of the narrative by calling for a month-long “national debate” on key governance issues starting this week. The debate will feature town hall-style forums throughout the country, though there is no guarantee of any policy implementation.

In the meantime, protesters are readying themselves for next Saturday.

Correction: January 16, 2019
An earlier version of this story incorrectly referred to flash balls as flash grenades.