There’s a Better Battlefield for the War Against Trump’s Lies: the Courts 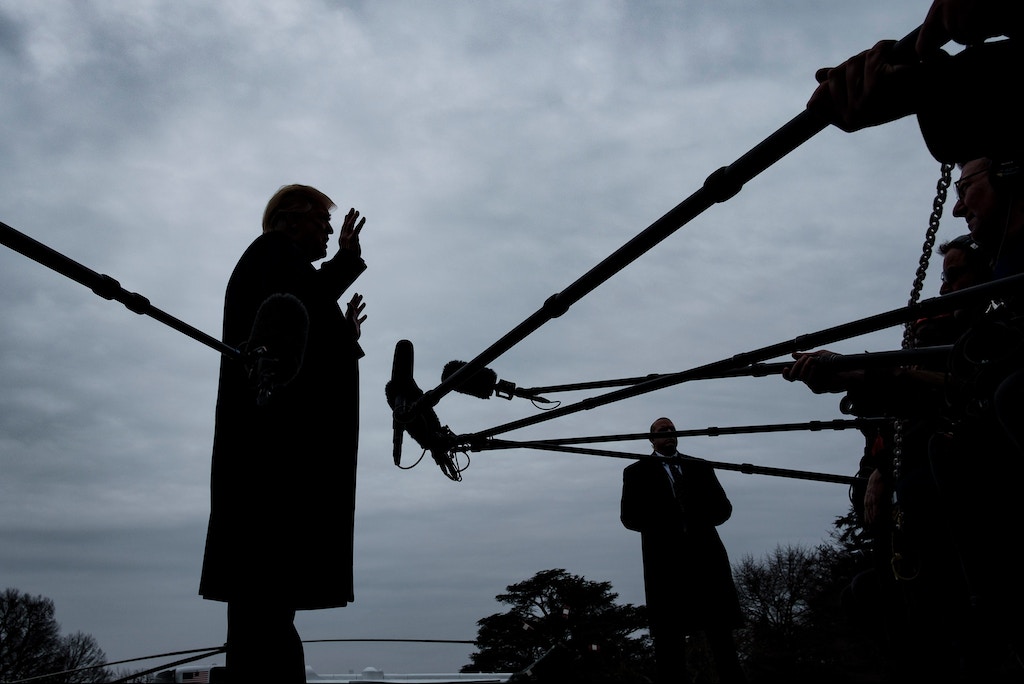 President Donald Trump speaks to reporters before boarding Marine One on the South Lawn of the White House on Jan. 19, 2019 in Washington, D.C.

President Donald Trump and his administration lie to and mislead the public as a matter of course. It’s a concerning but indisputable fact. So how do we combat propaganda and lies in our post-truth world?

The popular pre-Trump solution among news media outlets of fact-checking in real time — explaining to the public in dry, dispassionate language what’s true and what’s not — has proven ineffective and farcical at a time like this. In the bustling business of publicly fact-checking Trump, the Washington Post has counted more than 8,000 “false or misleading claims” from the 45th president. But that isn’t stopping his lies. However well-intentioned, the “Pants on Fire!” graphics are the equivalent of, in the eloquent words of antihero Erlich Bachman, bringing piss to a shit fight.

Consider the recent tweet from Trump about prayer rugs found near the U.S.-Mexico border: Its foundation was a report that — no joke — was based on the word of an anonymous rancher passing on what she said she heard from unnamed sources in the U.S. Border Patrol. How do you even fact-check such a claim?

Now, though, there might be a better battlefield for this information war: the courts.

The Information Quality Act requires government agencies to meet the same standards your local community college requires of its students.

The Information Quality Act, sometimes referred to as the Data Quality Act, is an obscure law enacted in 2001 as a rider in a spending bill. The initial idea behind the legislation was to guarantee that agencies of the U.S. government are held to reasonably high information-quality standards as more and more of their reports and data were made available on the internet.

The legislation directed the Office of Management and Budget to establish standards for information distributed by U.S. government agencies. The guidelines require information published by U.S. agencies to be objective and honest, with any analysis based on clear and transparent methodology.

Indeed, there’s nothing radical about the guidelines. Basically, they require government agencies to meet the same standards your local community college requires of its students. But the law also provides for a remedy: If a federal judge can be persuaded that an agency’s published information does not meet the standards, the judge can order the report to be removed and retracted.

Such an order has never been issued, largely because the Information Quality Act is a law with very little history of litigation. Before Trump’s election, special interest groups tried unsuccessfully to use the law to undermine distribution of government research they simply disliked. The libertarian Competitive Enterprise Institute, for example, tried to force the Commerce Department, which includes the National Oceanic and Atmospheric Administration, to halt distribution of the 2002 U.S. Climate Action Report.

Trump, however, has ushered in a new hope of relevancy — and use — for the law. We’ve never had a presidential administration whose lies are as frequent and blatant as this one’s. While previous administrations have certainly told lies, including some very big and consequential ones, the Trump administration is without equal in its prolific output of propaganda that can be debunked with readily available information. Enter the Information Quality Act.

There are plenty of areas in which public-interest lawyers can seek to make use of the Information Quality Act. One example came to us as the result of the executive orders that established the so-called Muslim ban. In one of the orders, Trump asked the departments of Homeland Security and Justice to create a report studying the risk of terrorism from immigrants.

The report, released in January 2018, claimed that 73 percent of 549 international terrorism defendants prosecuted in federal courts from September 11, 2001, to December 31, 2016, were born outside the United States — a striking data point that appeared to bolster the national security concern that the Muslim ban was ostensibly created to address.

A report from the Departments of Justice and Homeland Security has an information quality standard that might be politely described as equine feces.

The problem? The report’s standard of information quality might be politely described as equine feces.

Two coalitions of nongovernmental groups challenged the report under the Information Quality Act: Democracy Forward Foundation and Muslim Advocates filed a lawsuit in California and Protect Democracy, the Brennan Center for Justice, and the Brookings Institution filed a similar complaint in Massachusetts.

The Homeland Security and Justice report provided an ideal test of the Information Quality Act because it is demonstrably flawed and dishonest. As The Intercept noted after the report’s release, the 549 number that government officials used suggested that the Justice Department’s list of international terrorism defendants had been selectively edited to support the Trump administration’s predetermined conclusion.

Somehow, according to the report from the departments of Homeland Security and Justice under Trump, the list shrunk from 627 international defendants in 2015 to 549 in 2016.

Where did the 78 missing defendants go? Impossible to say, because government officials refused to release the underlying data. And they still won’t — though they’re now struggling to defend the report under the Information Quality Act.

In a December 2018 letter to the Democracy Forward Foundation and Muslim Advocates, Deputy Assistant Attorney General Michael Allen admitted that the report had flaws but that the government can’t “control the way in which information in the report is used or interpreted.” Allen also refused to provide the report’s underlying data, noting that neither law nor policy requires government agencies to make available such work product.

In addition, Allen defended the report’s use of eight “illustrative examples,” which included terrorism defendants whose crimes took place in other countries, but who were brought to the United States only for the purpose of prosecution. With Clintonian wordplay, Allen claimed that “illustrative examples” are not “representative” examples.

“This letter is fascinating, right?” said Robin Thurston, senior counsel for Democracy Forward Foundation, a nonprofit established in 2017 to expose corruption in the executive branch. “It acknowledges a lot of our concerns and walks the line about as close as possible to admitting that the report is false and misleading — and yet they’re letting the report stand.”

Allen sent a similar letter to Protect Democracy, the Brennan Center for Justice, and the Brookings Institution. In the letter, he conceded that “the report could be criticized by some readers,” though he claimed that, despite not providing the underlying data, the Justice Department had been “reasonably transparent.”

The organizations challenging the report are now waiting for a response from the Department of Homeland Security. Once that arrives — and it’s safe to assume that the agency will not volunteer to retract the report — the issue will be on track to go before judges in California and Massachusetts, setting up an unprecedented challenge of Trump administration propaganda under the Information Quality Act.

This should be one of many court challenges. The Trump administration is consistently making dubious claims, bigly, that could be challenged under the Information Quality Act. Officials have said 3,700 people with terrorist ties were apprehended at the border; that a border wall will stop terrorists; and that more than 600 criminals were part of the migrant caravan in November. Democracy Forward Foundation has already challenged as “misleading and unreliable” statements made by Treasury Department officials, including Secretary Steven Mnunchin, in support of the Republicans’ 2017 tax cut.

No more Truth-O-Meters, please. They’re toothless in our Trumpian age. Let’s file some lawsuits and give judges an opportunity to play their constitutional role in our increasingly dysfunctional republic.