Amid aggressive enforcement of minor offenses, most victims don’t report crimes to police and fewer than 25 percent of reported crimes are solved by arrest. 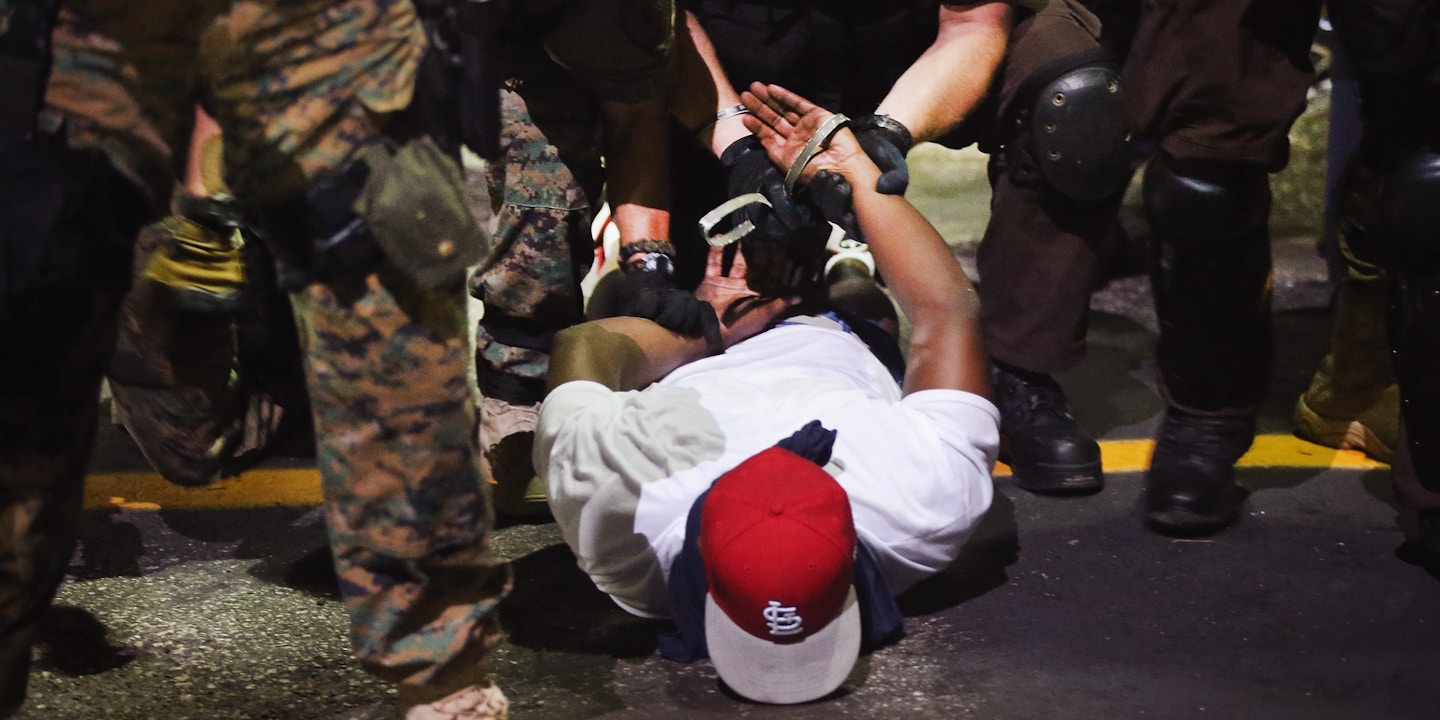 Someone is arrested in the United States every three seconds. While arrests are the first entryway into a criminal justice system most acknowledge is in dire need of reform, we know remarkably little about who is arrested, where, and why. Advocates and legislators have pushed in recent years for policy changes at various points of the justice process, from pretrial to sentencing, but arrests remain one of the largest and least scrutinized contributors to the country’s mass incarceration and policing crises.

The FBI and Bureau of Justice Statistics collect arrest data from the country’s 18,000 law enforcement agencies — but those agencies self-report on a voluntary basis, and there are significant disparities in the information they share. The data, for the most part, remains inaccessible to the broader public, and statistics on crime are isolated from data about the effectiveness of enforcement.

In an effort to better inform conversations about criminal justice, a team of researchers from the Vera Institute of Justice, a nonprofit research and policy organization, took more than two years to combine eight different federal databases into a tool that allows users to analyze arrest trends at the national, state, and county levels against a series of variables, including offense types, demographic factors, and solved crimes.

The project was born “out of this moment of frustration over the past number of years that there isn’t very much information on policing, people feeling like it’s a black box,” said Rebecca Neusteter, co-author of a report Vera released Thursday alongside the new data tool. “We wanted to be able to demonstrate that there is some information. There are gaps in knowledge, for sure, but there are lots of pieces of information that the government is spending a lot of money to collect. It just hasn’t been released for people to look at previously.”

That data shows that of more than 10.5 million arrests made every year, the bulk are for noncriminal behavior, drug violations, and low-level offenses. Since 1980, arrests for drug violations have increased by 170 percent, and racial disparities in enforcement have grown even more stark. Still, a majority of victims don’t report their experiences to police, and police solve only a fraction of the crimes that are reported.

In recent years, after a series of police killings sparked nationwide protests, a growing movement for police accountability also exposed systemic problems with everyday policing practices. Most arrests are ultimately dismissed, but aggressive enforcement of low-level offenses, especially in communities of color, causes long-term damage to those communities and their relationship with police.

“There’s a growing understanding that the problems of policing are not limited to a few high-profile deaths but are the result of a broader problem of over-policing,” said Alex Vitale, a sociology professor at Brooklyn College and author of a book that argues for alternatives to policing rather than police reform. “The solution to this is not making police arrests friendlier or more professional. It’s to quit relying on arrests to solve any problem under the sun.” The Persistent Harms of “Broken Windows”

The Vera tool analyzes arrest trends between 1980 and 2016. The data shows that overall arrests have declined by nearly 25 percent over the last decade. But it also shows that, while arrests for serious crimes have dropped consistent with declining crime rates nationwide, they are increasingly being substituted with arrests for minor misconduct.

Among the most common causes for arrest are low-level offenses like “disorderly conduct” and a broad, largely unexplained category the FBI refers to as “all other offenses,” which can include a variety of non-traffic offenses, violations of local ordinances, and civil violations like failure to pay fines or child support. Together with drug violations, these offenses account for more than 80 percent of arrests, while serious, violent offenses make up less than 5 percent of arrests.

“We really want to see a national conversation about whether or not this is a good use of resources,” said Neusteter. “Are we potentially creating more harm than good by arresting people for what are essentially really low-level, trivial offenses?”

While there is little integration between court data and police data, and it’s hard to track a case from arrest through prosecution, a majority of arrests are dismissed. Still, police continue to use them as an enforcement tool of their own, rather than a way to funnel criminal behavior into the justice system.

“That’s the broken windows theory,” said Vitale, referring to the largely discredited but still widely applied criminological view that low-level misconduct fuels more serious crime. “The arrest itself is the tool we are using to try to fix the problem.”

“There’s still profound political imperatives to use policing to solve every social problem, especially in poor communities and communities of color,” he added. “They’re getting complaints about kids on a street corner, so they are looking for any excuse to arrest these kids, and they don’t care if it’s prosecuted.” 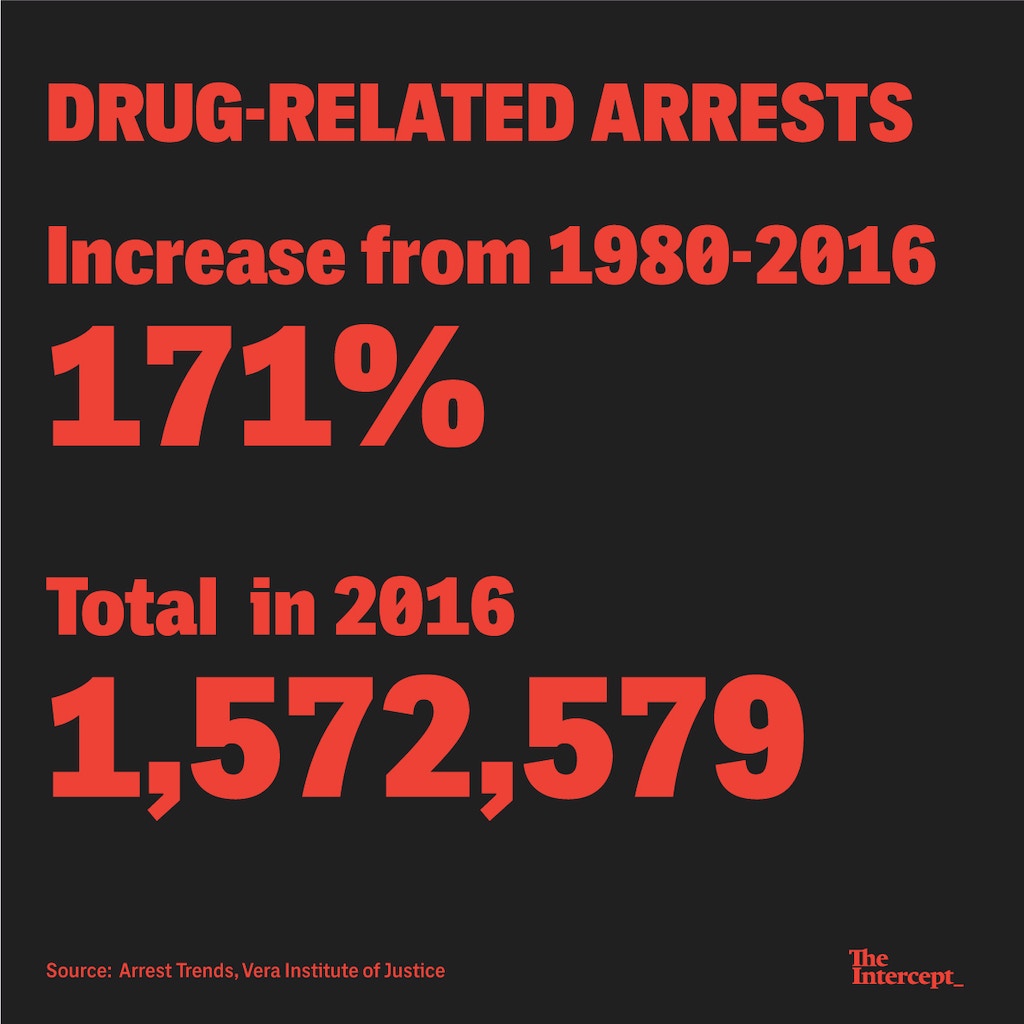 What the FBI refers to as “drug abuse violations” lead to 1.5 million arrests annually, the Vera report found. And while the FBI doesn’t differentiate in how it categorizes drug violations, federal statistics have consistently shown that a vast majority of them are over simple possession, most often of marijuana.

Black people nationwide are an estimated 2.39 times more likely to be arrested for “drug abuse violations” than white people — even though drug use rates are similar across the two groups. The estimated number of arrests of black people across the country has risen by 23 percent in the last four decades. African-Americans now make up 12 percent of the U.S. population and an estimated 28 percent of all arrests.

Amid a push for more progressive policies in prosecutors’ offices, a growing number of district attorneys have announced that they will no longer prosecute marijuana possession. But that hasn’t necessarily translated into a drop in arrests yet.

“There’s some type of disconnect between what’s going on in the prosecutors’ offices and what’s going on with the police,” said Vitale, noting that police maintain significant discretion to make arrests over pretextual reasons. “Failure to prosecute doesn’t mean that the police can’t still arrest you, put you through the system, bring you to arraignment.”

“There’s this discourse out there that with the opioid crisis, there’s more openness to talking about treatment and how this is a medical problem, but this is not what we see in the arrests numbers,” he added. “There’s been some change in the discourse, but not in the actual underlying police practices.” Arresting Everyone Doesn’t Make Anyone Safer

Perhaps the report’s most revealing finding, however, is that such aggressive enforcement doesn’t seem to do much to improve public safety or solve crime. Only 40 percent of crime victims report their experiences to police, Vera found, and fewer than 25 percent of reported crimes are cleared by arrests.

“This television-inspired myth-making that police are out there all day solving serious crimes is just completely erroneous,” said Vitale. “We have this myth that if we didn’t have the police, crime would be out of control, when the reality is very little crime is reported to the police, and even less is solved by the police. There’s just no reason to equate police with public safety in this way.”

Arrests have an enormous impact on individuals: They can exacerbate economic disparities, harm an individual’s capacity to retain housing and jobs, and lead to devastating consequences like the loss of child custody or deportation. The mental health cost, too, is significant. But the huge number of arrests also comes at a cost to the safety of the community at large: both at the moment of the arrest itself, which can put those arrested, bystanders, and officers at risk of harm, and in the long run, as relationships between over-policed communities and law enforcement deteriorate, sometimes irreparably.

While that seems far too high a price, police continue to focus their attention on the enforcement of low-level offenses and noncriminal behavior, reinforcing a cycle of mistrust. That’s in part in response to arrest quotas and other incentives police get for productivity, as well as financial gains for agencies and municipalities that rely on punitive enforcement for funding. Vitale pointed to the controversial “collars for dollars” practice, by which officers will sometimes make arrests toward the end of their shifts in order to earn overtime pay, as they are required to remain with the person they arrested through the booking process. “A marijuana possession arrest at the end of the shift can be worth several hundred dollars for the officer,” he noted.

But part of the problem is also that police are the go-to solution for all kinds of complaints in communities with no meaningful alternatives. “The vast majority of police work is in response to 911 calls for service,” said Neusteter. “I think that the major component of the large number of arrests for low-level offenses has to do with the fact that police are being called as the default responders for these quality-of-life issues.”

There are some bright sides to the Vera report, which the authors hope will inspire further analysis and reform. Arrests of minors, for instance, decreased by more than 50 percent between 1980 and 2014, as juvenile-specific offenses like running away or curfew violations were decriminalized, and non-punitive programs were instituted in lieu of arrest. The solution, the report makes clear, is to find alternatives to enforcement for much of the behavior police currently address with arrest.

“People do not go to jail, they do not go to prison, without being arrested first,” said Neusteter. “But we haven’t seen enforcement and arrests tied very clearly to those conversations and ultimately to the strategies that are attached to improving them. That’s our ultimate goal here.”