The U.S. Helped Push Venezuela Into Chaos — and Trump’s Regime Change Policy Will Make Sure It Stays That Way 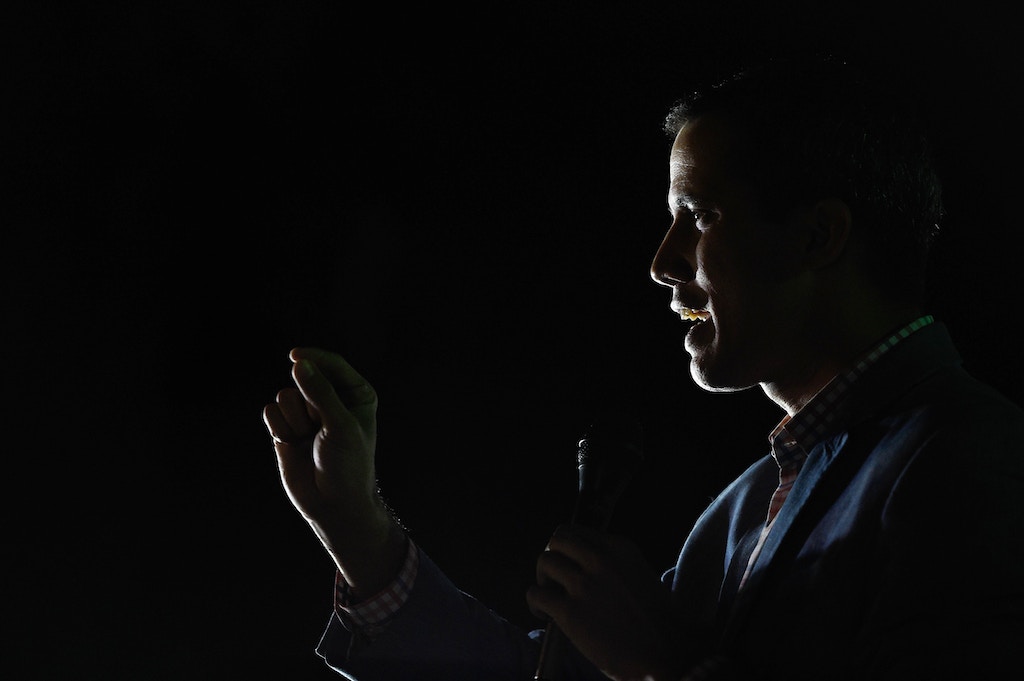 Venezuela’s National Assembly president Juan Guaidó speaks before a crowd of opposition supporters during an open meeting in Caracas, Venezuela, on Jan. 16, 2019.

Washington has been trying to topple Venezuela’s government for at least 17 years, but the Trump administration has taken a more openly aggressive tack than its predecessors. Last week, administration officials kicked their efforts into high gear by anointing their chosen successor to Venezuelan President Nicolás Maduro Moros in advance of any coup d’etat. The 35-year-old Venezuelan member of Congress Juan Guaidó announced that he was now president, and the Trump administration, along with allied governments, immediately recognized him — in accordance with a previously arranged plan.

It is clear that President Donald Trump’s goal is regime change; his administration is not even trying to hide it. And his allies, like Vice President Mike Pence and Sen. Marco Rubio, R-Fla., have long made it obvious what they are after.

It would be a terrible mistake to keep going down this road. Trump’s policies have only worsened the suffering of Venezuelans and made it almost impossible for the country to pull out of its prolonged economic depression and hyperinflation.

A negotiated solution is necessary to resolve the political conflict in Venezuela, yet the Trump administration’s commitment to extralegal regime change is rapidly precluding this option.

A negotiated solution is necessary to resolve the political conflict in Venezuela, yet the Trump administration’s commitment to extralegal regime change is rapidly precluding this option. Worse still, Trump’s apparent strategy is to increase suffering through sanctions — more of which were just announced — until a fraction of the military carries out a coup to create a new, pro-Washington government.

The fairness of the 2018 presidential election, which the opposition boycotted, is up for debate, but the main problems with the regime change strategy have to do with other considerations. Venezuela is a polarized country and overthrowing the government — even if Washington were not involved in the fight — would only increase this polarization and the chances of greater violence or even civil war.

Consider the example of Nicaragua, where in 1990 the leftist Sandinistas and their U.S.-backed opponents agreed to settle their differences through an election. The sides had to agree on certain conditions so that the losers would not be persecuted: The Sandinistas kept control over the army after they lost the elections, and peace was maintained.

These sorts of necessary compromises would be impossible under the regime change strategy being pursued by the Trump administration.

Venezuela is polarized along political lines and has been ever since Hugo Chávez was elected president in 1998 and launched his Bolivarian Revolution. The opposition’s attempt to overthrow Chávez in a military coup in 2002, aided and abetted by officials in the George W. Bush administration, as well as the opposition leadership’s vacillating willingness to accept the results of democratic elections in subsequent years laid the groundwork for many years of distrust.

Venezuela’s political polarization, however, also intersects with a great chasm that permeates most of Latin American society: a division by class and race. As in most of the Americas, the two are correlated. In the opposition protests that have occurred over the past decade, one could see these differences in the clothes worn by pro- versus anti-government protesters and in their skin tones. The opposition crowds and their leaders have been considerably whiter and from higher income groups than Venezuelans who supported the government. In the most recent protests, there has been an increase in anti-government actions in working-class and poor areas in Caracas, but the class and racial divide between Chavistas and opposition has not gone away.

Another line of Venezuelan polarization is the belief in sovereignty and self-determination. The Chavistas have made independence from the U.S. a centerpiece of their agenda, and their government, when it had money, pursued policies in the hemisphere that sought more independence for the region as well. The opposition and enemies of the Chavista governments, by contrast, have worked closely with the U.S. government for the past two decades — as can be seen in the coordination of this latest attempted coup. Washington’s intervention aggravates the polarization along the lines of sovereignty, and opens the opposition to charges of alignment with a foreign power — and a power that has historically played a terrible role in the region. To appreciate the animosity that this would create, think of how much ill will has been generated in the U.S. by Russian intervention in the 2016 presidential election, and multiply that by a few orders of magnitude.

The polarizing impact of the Trump regime change operation is what makes it so dangerous.

The polarizing impact of the Trump regime change operation is what makes it so dangerous. Inflation is probably over 1 million percent annually, and the economy is estimated to have shrunk by a Latin American record of 50 percent over the past five years. Millions have left the country to look for work. The opposition would almost certainly have won the last presidential election if they had participated and mostly united around a single candidate. (For the record, the U.S. reportedly threatened an opposition candidate who did participate, Henri Falcón, with personal financial sanctions if he ran for president.)

Though the government’s economic policies have played a role in Venezuela’s woes, the Trump sanctions have made things considerably worse since August 2017, decimating the oil industry and worsening shortages of medicine that have killed many Venezuelans. The Trump sanctions also make it nearly impossible for the government to take the necessary measures to exit from hyperinflation and depression.

Though the U.S. media is quiet on the matter, it’s important to note that the Trump sanctions are both violently immoral — again, they kill people — and illegal. They are prohibited under the Organization of American States Charter, the United Nations Charter, and other international conventions that the U.S. is party to. The sanctions also violate U.S. law, since the U.S. president must state, absurdly, that Venezuela presents “an unusual and extraordinary threat to the national security” of the United States in order to impose these measures.

Venezuela cannot exit from this political crisis by one side vanquishing the other, as the proponents of regime change assume. The Vatican played a role as mediator in 2016, and Uruguay and Mexico — who have remained neutral in the political conflict — offered this week to help mediate. But the Trump team is a powerful influence on the opposition, and they have so far shown no interest in a peaceful solution.