Former Justice Department spokesperson Sarah Isgur has been an active foot soldier in the right’s decades-long assault on journalism. 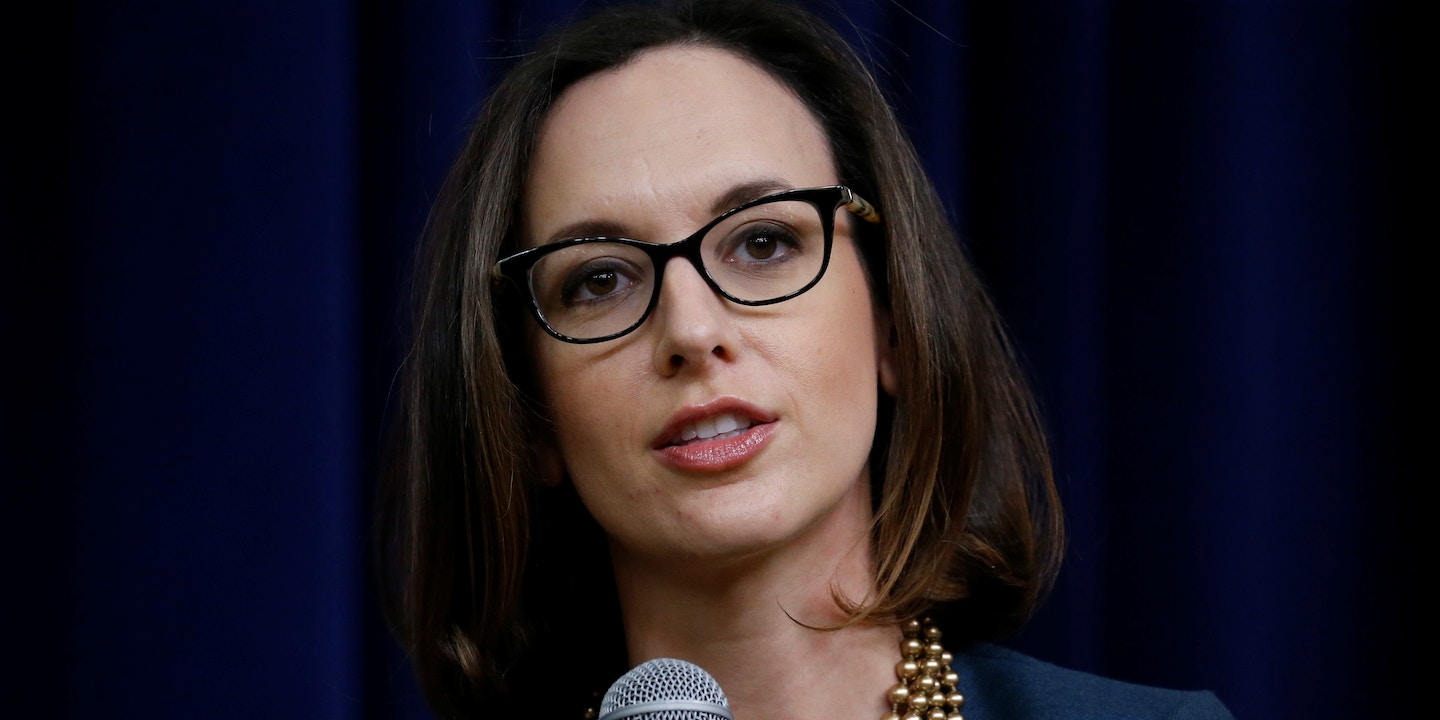 “Boom,” wrote Sarah Isgur on Twitter in 2014, quoting a tweet from the publication Free Beacon: “The Clinton News Network is back!”

Two years later, Cesar Sayoc was ranting on Facebook about the “Clinton News Network.” By the end of 2018, Sayoc was sending a wave of pipe bombs to critics of President Donald Trump. Three of the bombs were addressed to CNN. None went off, but FBI Director Christopher Wray described them as “IEDs” — improvised explosives devices. Boom.

On Tuesday, Politico reported that Isgur, a longtime GOP operative who most recently was a top official in Trump’s Justice Department, has been hired by CNN. Isgur, who has no experience in journalism, will be one of several editors who coordinate the channel’s coverage of U.S. politics.

Boom--> RT @FreeBeacon: The Clinton News Network is back!

It’s incredible that CNN executives would require its employees to welcome any Trump administration official as a colleague. It’s not that news outlets haven’t hired political hacks before; they have. But Trump’s obsessive demonization of the media and the consequences of that demonization specifically for CNN — Trump’s top target — are sui generis.

As Trump relentlessly repeats, CNN is “Fake News.” They demonstrate “extreme hatred and bias” toward him. They are the “Enemy of the People!” Most famously, Trump tweeted a video from his pro-wrestling days that was doctored to show him physically attacking someone with the CNN logo for a head.

According to Lesley Stahl of “60 Minutes,” in the summer of 2016, Trump explained to her off-camera that he attacks the news media “to discredit you all and demean you all so when you write negative stories about me no one will believe you.” It was inevitable that this tactic would move some members of Trump’s base to action.

The windows of Sayoc’s van was covered with pictures and text that were essentially Trump’s twitter account in collage form. Trump has called CNN “dishonest” over and over again. An image on Sayoc’s van read, “DISHONEST MEDIA/CNN SUCKS.”

Beyond Sayoc, an Arkansas man was arrested for allegedly making multiple “terroristic threats” against CNN anchor Don Lemon. A Pennsylvania man called into C-SPAN to say that CNN “started the war” and that if he saw Lemon or CNN’s Brian Stelter, “I’m going to shoot them.” CNN contributor April Ryan has said that the Trump White House has “put a target on my head” and that she’s been forced to hire a bodyguard.

Even Sayoc’s bomb spree didn’t slow Trump’s incitement. In fact, soon after Sayoc was arrested, Trump explained that the right’s anger toward “the Fake News Media, the true Enemy of the People” is understandable, and news outlets have only themselves to blame for whatever happens.

There is great anger in our Country caused in part by inaccurate, and even fraudulent, reporting of the news. The Fake News Media, the true Enemy of the People, must stop the open & obvious hostility & report the news accurately & fairly. That will do much to put out the flame...

Isgur has worked for Ted Cruz, Mitt Romney, and the Republican National Committee and was deputy campaign manager for Carly Fiorina when Fiorina ran for the GOP presidential nomination in 2016. She was hired by the Trump Justice Department in 2017 — but not until she, as the Washington Post put it, was willing to “kowtow to Trump” for criticizing him during the GOP primaries and swear fealty to his agenda.

Like everyone willing to serve in the Trump administration, Isgur is complicit in the president’s dangerous war on the media. And she’s also personally been an active foot soldier in the decades-long assault on journalism by the right that has culminated in Trump.

She sarcastically referred on Twitter to “balanced reporting today from CNN,” because the network’s chyron referred to the explicitly anti-gay and anti-abortion Family Research Council as “anti-gay and anti-abortion.” She tweeted out an article calling CNN’s Chris Cuomo “despicable” for asking if Fiorina — after the November 2015 mass shooting at a Planned Parenthood clinic in Colorado Springs — had “any sense of regret” over her misleading, incendiary claims about Planned Parenthood.

Isgur herself said that “the liberal media tried to ignore truth about Planned Parenthood.” She also attacked “the liberal media” ahead of the Iowa caucuses. “Despite efforts of media & political class,” Isgur wrote, “Carly will not stop fighting to take our country back.” She was angry about “MSM bias.” And so on.

But none of this apparently matters to the people who run CNN. Have they asked Isgur to tell her new co-workers whether she disagrees with anything about Trump’s views on CNN? Does she have any regrets about participating in a brand of politics that has put their lives in danger? Do they think her presence will damage morale?

Who knows? Neither CNN nor Isgur responded to a request for comment.