Small-Dollar Donors Are Playing a Growing Role in Congressional Campaigns

“More candidates chose to focus on waging campaigns based on good public policy, not what delights Wall Street donors.” 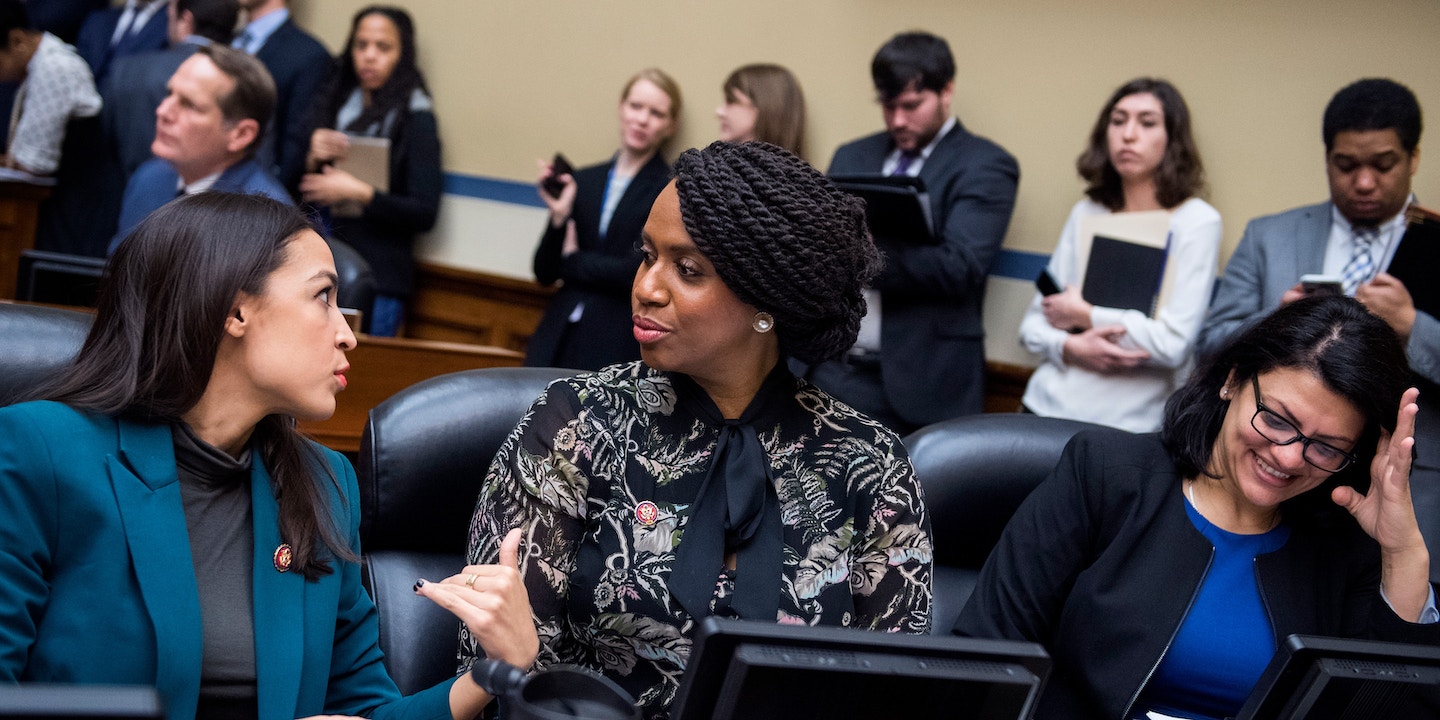 Freshman House Democrats, many of whom made it to Congress on pledges of reforming campaign finance, are chipping away at Wall Street’s influence in Congress.

First-term Democratic members relied less on corporate donors in the 2018 midterm elections and raised higher percentages of campaign cash through small-dollar donations than the Democratic incumbents who ran for re-election, according to a new report by Americans for Financial Reform and the Center for Economic and Policy Research, or CEPR.

“In competitive districts the key to fundraising was Wall Street, but that’s not how the first-year Democrats in contested districts won their races,” Jeff Hauser, executive director of the Revolving Door Project at CEPR, told The Intercept. “I don’t think that’s how they’re going to win re-election. I think that they can raise more than enough money from small-dollar donors, and in so doing, they can actually run on populist themes that are very popular across the political spectrum.”

“More candidates chose to focus on waging campaigns based on good public policy, not what delights Wall Street donors.”

The report’s findings signal the efficacy of an approach adopted by progressive candidates across the country last year, to eschew corporate donors for contributions from small-dollar givers — those who donate $200 or less. This is a trend that is likely to grow, as 2020 presidential contenders Sens. Bernie Sanders, Elizabeth Warren, Kamala Harris, Kirsten Gillibrand, and Cory Booker have sworn off donations from corporate political action committees, and the number of small-donors a candidate gets has become a signal of strength, a break from the past when only the top-line dollar figure mattered.

On average, first-time Democratic candidates raised 17 percent of their campaign committee money from small donors, compared with 9.4 percent for incumbents running for re-election, the research found. And the Democrats who had the tightest races, winning by a margin of less than 10 percent, raised even more of their cash from small donors than first-time candidates overall: 18.6 percent.

Wall Street, defined in the report as the combination of the finance, insurance, and real estate sectors, played a noticeably smaller role in fundraising for new House Democrats. First-term Democrats raised 10 percent from Wall Street, lower than the 12.9 percent of House Democrats overall.

The report leans on the side of caution in a way that, if anything, understates the magnitude of the shift, Hauser said. If a real estate agent living in a middle-class neighborhood gave $250 to a local candidate, for example, their contribution would be lumped in with Wall Street money rather than small donors.

“More candidates chose to focus on waging campaigns based on good public policy, not what delights Wall Street donors,” Lisa Donner, executive director of Americans for Financial Reform, said in a statement. “That choice inspired the grassroots and empowered small donors. We still have a long way to go in preventing Wall Street dollars from systematically distorting our democracy. But this is a very hopeful development. It should inspire still more members to stand up for economic justice.”

Leaning on small-dollar donors extends beyond the way a candidate runs a campaign to the way they spend their time in office.

Historically, “money committee” assignments in the House — on the Financial Services, Ways and Means, and Energy and Commerce committees — have been a magnet for new members in need of heaps of campaign cash. Democrats with the most competitive races have aggressively pursued those seats, and since the party has tended to recruit conservative, business-friendly candidates in swing districts, the result is a committee stacked with conservative freshman and sophomores more concerned with fundraising than advancing progressive legislation. Indeed, the two goals are in conflict, which leads to weakened legislation, since those committee members now sit at an institutional choke point, where they have outsized influence on the process.

This year, however, freshmen Reps. Katie Porter of California, Rashida Tlaib of Michigan, Alexandria Ocasio-Cortez of New York, and Ayanna Pressley of Massachusetts, who all refused corporate PAC money in favor of small-dollar donations during their campaigns, won seats on the Financial Services Committee, which oversees the banking industry. Though there are still business-friendly Democrats on the committee, the presence of progressives who rely on small dollars is a sea change.

“You could potentially reap small-dollar campaign rewards from holding corporate executives’ feet to the fire.”

Beyond the committee politics, members are expected to spend hours of their day on fundraising obligations like making calls to potential donors or showing up to fundraisers in person, which keeps them from doing the actual job of being in Congress. Having to choose between fundraising and legislating typically results in skipping hearings and missing out on time with constituents. Ocasio-Cortez has pointed out that her reliance on small-dollar donors allows her to sit through committee hearings in full, giving her hours of learning and eventual technical expertise.

“I thought it was great the way Ocasio-Cortez emphasized the freeing aspect of her reliance of small donors,” Hauser said. “She’s actually been showing up to all the committee hearings, which is a sign that she’s showing up prepared because her time is much better situated in doing both her oversight work in Congress, as well as her constituent service, so that’s a huge advantage.”

Lawmakers who’ve taken corporate-free pledges can support their campaigns for re-election merely by doing the job they were elected to do. By focusing their time on preparing for committee hearings — and effectively grilling the people who come before them — the lawmakers can excite small-dollar donors. “You can be rewarded for digging into not only Michael Cohen, but pharmaceutical companies and banks that are coming before the committee,” Hauser said.

The progressives on the Financial Services Committee will have the chance to do that next week, when Wells Fargo CEO Tim Sloan is expected to testify, and next month, when the heads of the largest banks in the country, including JPMorgan Chase, Citigroup, and Bank of America, are expected to appear.

“Those hearings require significant preparation and then part of the result of that preparation is that you then have video of your member of Congress grilling these senior figures in a well-informed manner,” Hauser said. “So you could potentially reap small-dollar campaign rewards from holding corporate executives’ feet to the fire, which is exactly what you should be doing.”

Some of the new members have already turned otherwise dull committee hearings into viral moments. Ocasio-Cortez received national attention for her interrogation of Cohen at the Oversight Committee hearing last week, a result of extensive preparation with a team of staff. Porter, a consumer-protection law expert and former student of Warren, the Massachusetts senator, was also praised for aggressively questioning Equifax CEO Mark Begor about the company’s 2017 data breach.

Relying on corporate PAC money means “your incentives are to move in the shadows on behalf of corporate interests while eluding public observations of your work,” Hauser said, adding that the incentives are significantly better when relying on small-dollar donors.

The financial sector has often lobbied to shape legislation in its favor, and the new wave of House Democrats could push Congress away from that model. The 2010 Dodd-Frank Act, designed to prevent another financial meltdown, “was less than it could or should have been at the time” because of lobbying from the financial sector, Hauser said. Last year, Democrats celebrated the 10th anniversary of the financial crash by joining their Republican colleagues in a push for a major rollback of Dodd-Frank, known as the “Crapo bill” —  giving President Donald Trump and the financial sector a prominent victory.

The Democrats who backed the bill — Sens. Heidi Heitkamp, Joe Donnelly, and Claire McCaskill — did not make it through the midterm elections, Hauser noted. “They didn’t win re-election, and so I think that they might regret the fact that they kind of sold out the Democratic Party’s values to take a vote that might have been deemed pragmatic as a way to raise money, but was ultimately far from sufficient to get them re-elected.”