Sen. Cory Booker criticized the lighthearted way that two of his rivals for the Democratic presidential nomination joked about their past use of marijuana. 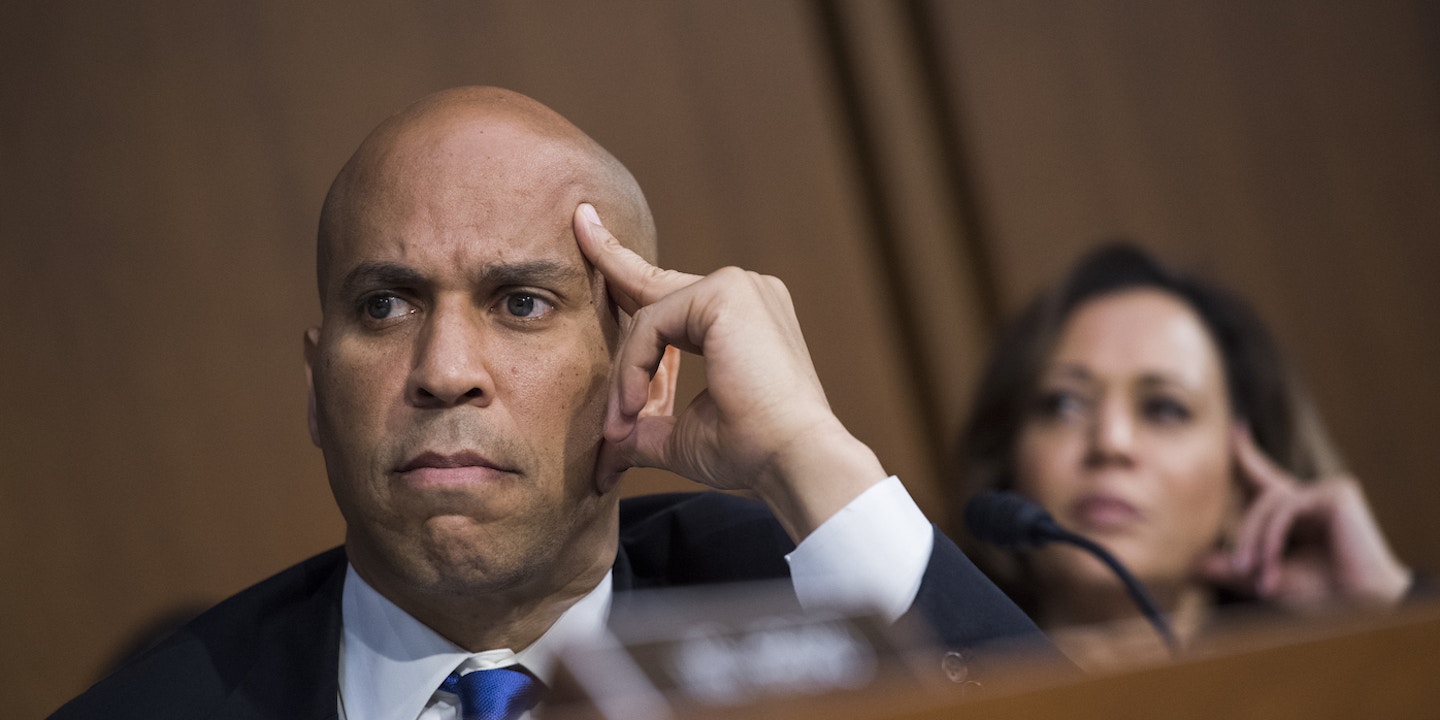 In Davenport, Iowa this weekend, Sen. Cory Booker twice offered veiled criticism of the lighthearted way that two of his rivals for the Democratic presidential nomination, Sens. Kamala Harris and Bernie Sanders, have joked about their past use of marijuana.

In an interview with MSNBC on Monday, Booker suggested that, while he was in favor of reforming the drug laws, the gross disparity in the way that rich and poor users are currently treated by the criminal justice system makes it no laughing matter. “The privileged can break laws and not have to worry about it. There’s no difference between blacks and whites for using marijuana, or even selling marijuana, but blacks are almost four times more likely to be convicted,” Booker said.

“Now we have presidential candidates, senators, bragging about their pot use while there are kids who can’t get a job because they have a nonviolent offense for doing things that two of the last three presidents did,” he added.

While he declined to name them, both Harris and Sanders recently attracted attention for joking about their past use of the drug during interviews with “The Breakfast Club,” a nationally syndicated radio show.

As the pro-legalization website Marijuana Moment first noted, Booker made similar comments one day earlier, suggesting that he plans to use the issue against rivals who both signed on as co-sponsors last month when he introduced the Marijuana Justice Act, which would remove the drug from the federal list of controlled substances and expunge past convictions.

Asked at a town hall discussion on Sunday to explain his stance on the decriminalization of the drug, Booker adopted a somber tone and began by saying, “a lot of people have a very different perspective on marijuana than I do.”

“We have presidential candidates and congresspeople and senators who now talk about their marijuana use almost as if it’s funny,” he added. “But meanwhile, in 2017, we had more arrests for marijuana possession in this country than all the violent crime arrests combined.”

With a note of righteous indignation in his voice, Booker concluded: “Do not talk to me about legalizing marijuana unless in the same breath you talk to me about expunging the records of millions of people that are suffering with not being able to find a job.”

Booker, who says that he has never smoked pot — in part because of an awareness instilled into him by his parents that, as a young black man, he could expect no mercy from the justice system — seems intent on using the lighthearted way Harris and Sanders discussed the issue to undermine them.

The Harris and Sanders campaigns did not immediately reply to requests for comment.

Booker’s Senate bill is also supported by Elizabeth Warren, who says she has never smoked marijuana, and Kirsten Gillibrand. The Democrat with the longest record of supporting legalization is former Rep. Beto O’Rourke, who sponsored an El Paso City Council resolution in 2009 calling for marijuana legalization and a conversation about legalizing all narcotics.

Booker’s comments were widely seen as a way for him to cast doubt on Harris’s commitment to reform, given her recent change of heart on the issue, and potentially question her less than progressive record as San Francisco’s district attorney and then as California’s attorney general.

Here we go! Now things are starting to get interesting.

In a little-noticed comment over the weekend, Cory Booker appeared to criticize the way rival presidential candidate Kamala Harris has treated the marijuana issue as a laughing matter.https://t.co/rEzYnx1O0K pic.twitter.com/00JqNoqowU

Corey Booker just fired shots at Kamala Harris on @HardballChris... Candidates and politicians bragging about smoking marijuana while poor kids are being locked up for possessing it. Shots fired.

Harris’s peals of laughter on the radio when she replied to the questions of whether she supports the legalization of marijuana — “Half my family is from Jamaica, are you kidding me?” — and whether she ever smoked pot — “I have, and I did inhale” — were criticized from both the right and the left, for seeming too flip to some and like part of an effort to conceal her past opposition to others.

The senator’s Jamaica-born father, Donald Harris, was among those who criticized the tone of her remarks. “My dear departed grandmothers … as well as my deceased parents, must be turning in their grave right now to see their family’s name, reputation, and proud Jamaican identity being connected, in any way, jokingly or not with the fraudulent stereotype of a pot-smoking joy seeker and in the pursuit of identity politics,” he told Jamaica Global Online. “Speaking for myself and my immediate Jamaican family, we wish to categorically dissociate ourselves from this travesty.”

Before Harris came out in favor of marijuana legalization in 2018, when she endorsed an earlier measure introduced by Booker, she had opposed ballot initiatives to decriminalize recreational use in California. In 2010, a spokesperson for Harris explained that her position was based on her experience as a prosecutor. “Spending two decades in courtrooms, Harris believes that drug-selling harms communities,” her then-campaign manager Brian Brokaw said. “Harris supports the legal use of medicinal marijuana but does not support anything beyond that.”

Last year, however, Booker had seemed glad to have Harris’s support for his bill — and video from the time shows that he was already using the argument that “congresspeople, senators, have admitted to using marijuana.”

The fact is?,? marijuana laws are not applied and enforced in the same way for all people. That’s why I'?ve signed onto @CoryBooker’s Marijuana Justice Act? to make marijuana legal at the federal level?. It’s the smart thing to do?. pic.twitter.com/JD5qqm0bfU

The comments by Sanders drew less attention, but he told the “Breakfast Club” hosts this month, “I believe in the legalization of marijuana.” When asked if he had ever smoked, he replied: “Few times — didn’t do a whole lot for me. My recollection is, I nearly coughed my brains out, so it’s not my cup of tea.”