Tucker Warren, who has been running communications for Howard Schultz since January, is also a partner at a PR firm with numerous corporate clients. 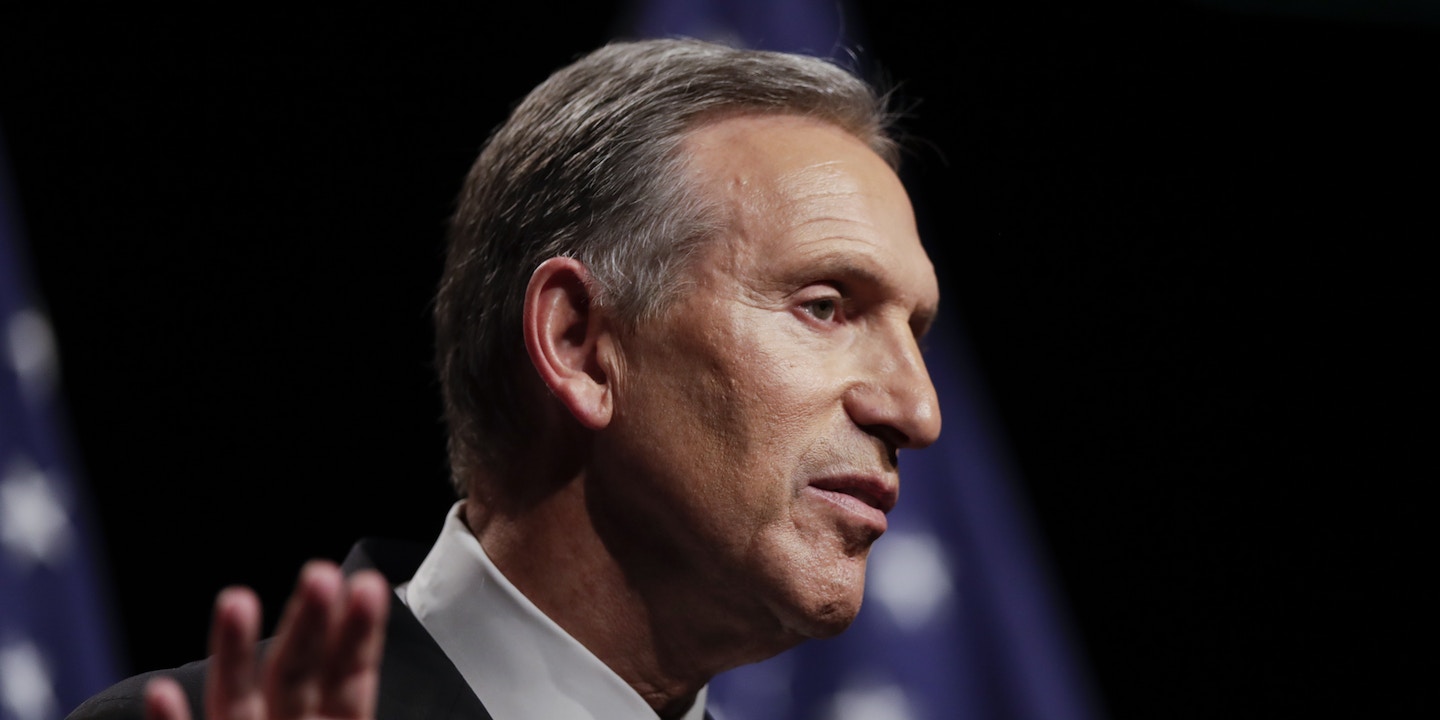 If he were to become president, former Starbucks CEO Howard Schultz has vowed to hire staff that “truly represents America in every way.” He got an early jump on that with a hire representing a particular corner of America: the corporate boardroom.

Tucker Warren, who has been running communications for Schultz’s independent, not-yet-presidential campaign since January, is also a partner with Hamilton Place Strategies, a public relations firm for numerous corporate clients, including several big banks. Founded by Tony Fratto, a former press aide to George W. Bush, Hamilton Place has for years cranked out arguments favoring financial deregulation and opposing the breakup of the nation’s largest financial firms.

Schultz has spent the early part of his presidential exploration avoiding specifics and defining himself as a “centrist independent,” midway between progressives like Bernie Sanders and Elizabeth Warren and reactionaries like Donald Trump. He has said that he would not sign any legislation unless it has bipartisan support, and that his cabinet would include Democrats and Republicans. He has highlighted the budget deficit and “limiting the power of lobbyists and special interests in Washington.”

That goal appears to be at odds with Schultz’s staffing decisions, given that Warren’s employer works for a multitude of special interest groups.

Warren told The Intercept in an email that he is on leave from Hamilton Place and “focused full-time on Howard Schultz.” On Hamilton Place’s website, Warren is still listed as a partner, and his LinkedIn page states that both jobs are current.

Hamilton Place Strategies did not return a request for comment. Currently, Warren is the only member of the PR shop who is employed by Schultz.

“My work for Howard Schultz has no bearing on HPS or the counsel it provides to clients,” Warren said to The Intercept. However, given the breadth of his corporate clients, the potential for a conflict of interest is strong. Warren’s Hamilton Place bio indicates that he “oversees client accounts pertaining to domestic and international finance, trade, insurance, healthcare, education, manufacturing, transportation, and technology,” which describes nearly all major domestic policy that a president would need to administer.

Warren would not commit to recusing himself from working on these issues as part of the Schultz campaign. “I will absolutely and without hesitation engage on issues – the list you provided is basically the entire U.S. economy – where my career has given me understanding that can inform our team’s thinking,” he wrote.

He joined Hamilton Place in 2011 and was made a partner in 2014. Previously, he was the communications director for the Financial Crisis Inquiry Commission, which studied the 2008 banking industry crash. Before that, at the PR firm Edelman, he worked with corporate clients like JPMorgan Chase and AstraZeneca. Warren has largely worked behind the scenes at Hamilton Place, but the firm’s positioning on key issues of financial regulation offers a window into the work he did.

Hamilton Place is most widely known for going to bat for Wall Street. Major trade associations and big banks are some of the firm’s largest clients. Fratto, who was a Treasury Department spokesperson under George W. Bush, frequently pops up in financial regulation-related stories, scoffing at the need for new rules on the big banks. In 2016, Fratto was one of the biggest opponents of the 21st century Glass-Steagall Act, which would have imposed a firewall separating investment banks that engage in trading activity from commercial banks that take deposits.

Fratto also has been one of the most consistent backers of the Export-Import Bank, which facilitates cheap loans for foreign deals with U.S. multinationals. Hamilton Place created “Exporters for Ex-Im,” an ad hoc group of companies seeking to turn the cheap lending spigot back on.

In 2013, Hamilton Place released a report called “Banking on our Future: The Value of Big Banks in a Global Economy,” which argued that capping the size of U.S. banks would reduce American influence and competitiveness, while not making the global financial system any safer. “The truth is that the U.S. needs both large multinational banks and small community banks in order to service the needs of the U.S. and global economies,” the report reads. The report also claimed that U.S. banks aren’t that big compared to European counterparts, though that margin disappears when using comparative international accounting standards.

In short, Hamilton Place is a full-service support staff for Wall Street banks, parroting their arguments at every turn for years. And now one of their partners is doing communication for a possible presidential candidate.