Hoping to help Israel’s leader get re-elected, Trump recognized Israel’s annexation of the Golan Heights, territory it seized from Syria in 1967. 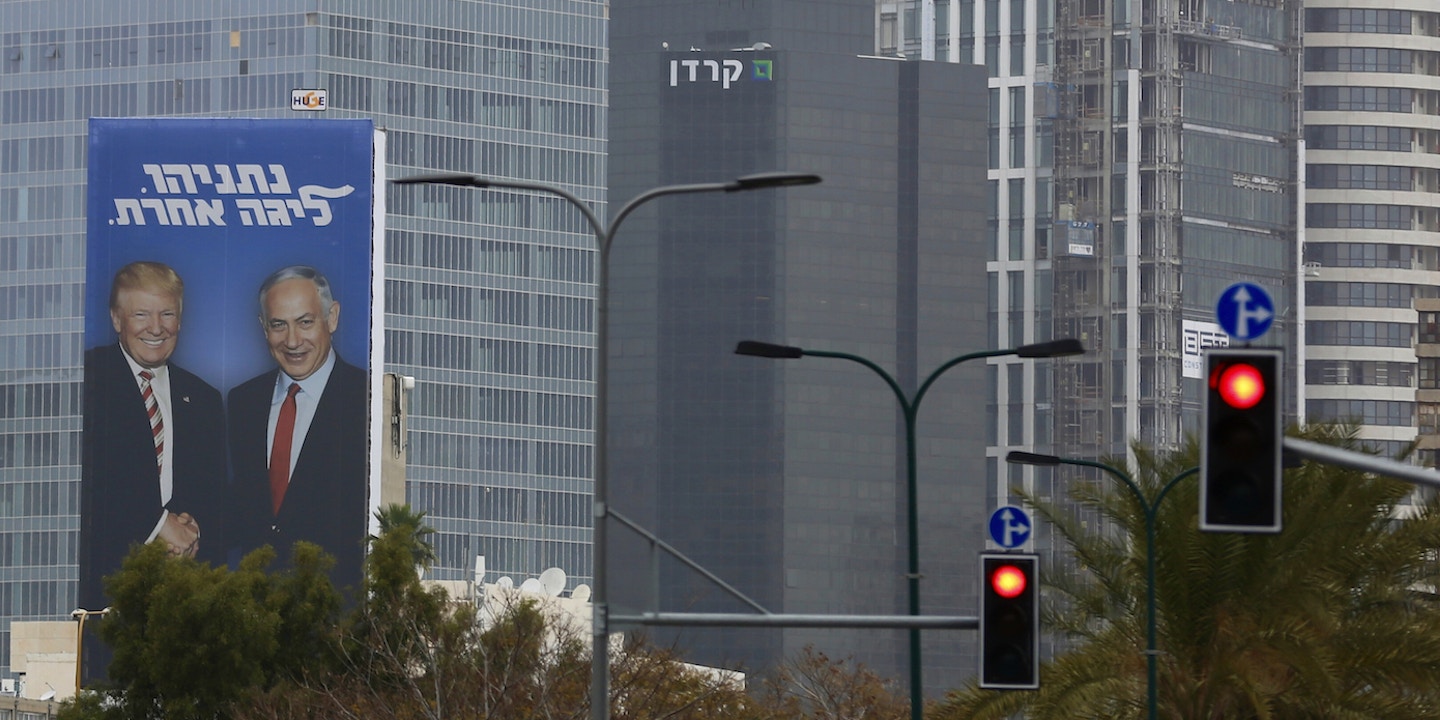 With a tweet posted on Thursday, President Donald Trump dismissed five decades of international consensus on the status of the Golan Heights, Syrian territory seized by Israel in 1967 during a pre-emptive war, declaring that the United States would recognize Israel’s annexation of the region.

Offered without explanation, the move looked to many Israeli, Palestinian, and American observers like a transparent attempt to boost the re-election prospects of Trump’s embattled ally, Prime Minister Benjamin Netanyahu, who faces corruption charges and could be defeated at the polls next month.

To save the journos reaching out re Trump's Golan announcement some time:

No, this won't lessen the prospects of the Kushner plan or further diminish Palestinian faith in US mediation. Those things were already at zero.

This is simply Trump campaigning for Netanyahu.

This is Trump handing @netanyahu a political gift right before his election and shortly after Bibi joined forces with an overtly racist political party. https://t.co/JtfcjTvCu7

Among the many replies to Trump’s tweet was one from Mohamed ElBaradei, the former head of the International Atomic Energy Agency, who advised the American president “to consult with your international lawyers.” Trump’s declaration, ElBaradei noted, flies in the face a United Nations Security Council resolution adopted unanimously in 1967, which called for the “withdrawal of Israel armed forces from territories occupied” in that summer’s conflict — including the Golan, as well as the West Bank, East Jerusalem, and Gaza — and emphasized, “the inadmissibility of the acquisition of territory by war.”

Early Friday, a spokesperson for the Syrian government, which still controls about a third of the region, told the state news agency SANA that Trump’s statement “on the occupied Syrian Golan will never change the fact that the Golan was and will always be a Syrian Arab territory and that the Syrian people are more determined to liberate it by all possible means no matter what.”

Trump’s statement was also denounced on Friday by Syria’s ally Russia. Dmitry Peskov, a spokesperson for President Vladimir Putin, said the move could “considerably destabilize the already strained situation in the Middle East,” even though U.S. recognition of Israel’s right to annex territory it seized by force could potentially pave the way for Trump to recognize Russia’s annexation of Crimea.

Such calls regarding #GolanHeights may considerably destabilize the already strained situation in the #MiddleEast. The idea by no means works for the goal of Middle East settlement. It’s the other way round, spokesman for #Russia's President Peskov said. https://t.co/Z1eInys582 pic.twitter.com/z2oVEM49ln

Russian state television made the connection between the two situations explicit.

#Russia's state TV says that by making his Golan Heights statement Trump surrendered any right to criticize Russia for the annexation of #Crimea. pic.twitter.com/CeJCjHA4gS

The reaction was considerably more positive from Israel’s prime minister and his allies.

Standing alongside Secretary of State Mike Pompeo, who was in Israel for the announcement, a beaming Netanyahu described Trump’s gift to his re-election campaign as “a miracle of Purim,” the Jewish holiday celebrated this week.

“He did it again,” the Israeli prime minister said of an American president who seems determined to make every wish of Israel’s far-right nationalist leader come true. “First, he recognized Jerusalem as Israel’s capital and moved the U.S. Embassy here,” Netanyahu said, “then he got out of the disastrous Iran treaty and reimposed sanctions, but now he did something of equal historic importance — he recognized Israel’s sovereignty over the Golan Heights.”

In an interview with Fox Business News recorded on Thursday, Trump offered a less-than-convincing denial of the suggestion that his announcement was related to Netanyahu’s re-election campaign. “No, I don’t — I wouldn’t even know about that. I wouldn’t even know about that,” the president told Maria Bartiromo. “I have no idea. I hear he’s doing okay.”

In the same interview, Trump also claimed, falsely, that previous presidents had promised during their campaigns for office to recognize Israel’s annexation of the Golan Heights. “For years, other presidents have campaigned, they said they’d do it,” Trump said. In fact, the three presidents he seemed to be referring to — Bill Clinton, George W. Bush and Barack Obama — had all tried to convince Israel to withdraw from the Golan Heights in exchange for peace with Syria.

Netanyahu’s biographer, Anshel Pfeffer, suggested that the timing of the announcement, ahead of the Israeli prime minister’s visit to the White House next week, might have been an attempt to distract Israel’s electorate from another brewing scandal. “Netanyahu is petrified,” Pfeffer argued in Haaretz on Friday, “that the new revelations on his trading in shares in his cousin’s company, which netted him $4.3 million and may have a connection with the company’s dealings with the German shipyard from which Israel purchases its submarines, could dominate the last stage of the election campaign.”

By accepting Israel’s 1981 annexation of the Golan Heights, after withdrawing from the Iran nuclear deal and moving the U.S. Embassy, Trump also checked off another item on the pro-Israel wish list of one of his biggest donors, the American casino magnate Sheldon Adelson, who spent more than $20 million to support his 2016 presidential campaign and is also Netanyahu’s most important backer.

A measure of how far the White House has tilted in Israel’s favor since Trump took office can be seen in reports from 1981, when Israel’s annexation of the Golan Heights prompted another Republican president, Ronald Reagan, to respond by ordering a halt to a military cooperation agreement with Israel and endorsing a U.N. Security Council resolution stating that “the Israeli decision to impose its laws, jurisdiction and administration in the occupied Syrian Golan Heights is null and void and without international legal effect.”

American allies in Europe said that Trump’s statement had no impact on the status of the Golan Heights under international law.

We have taken note of US President Trump’s Tweet on the Syrian Golan Heights occupied by Israel. The position of Germany and the EU on the Golan Heights is unchanged and in line with relevant UN Security Council resolutions.

“The UK views the Golan Heights as territory occupied by Israel,” the British Foreign Office said in a statement on Friday. “Annexation of territory by force is prohibited under international law, including the UN Charter. We did not recognise Israel’s annexation in 1981 and have no plans to change our position.” The European Union reiterated that it “does not recognize Israel’s sovereignty over the territories occupied by Israel since June 1967, including the Golan Heights, and does not consider them to be part of Israel’s territory.”

As the Israeli-American journalist Mairav Zonszein noted, Jason Greenblatt, the Trump administration’s peace envoy for the region seemed only mildly less excited by the news than Israel’s prime minister.

So Greenblatt is working for the Israelis right https://t.co/0V7DYityIu

The American envoy — who is working with the president’s son-in-law, Jared Kushner, on a peace plan that seems to begin with total surrender to every Israeli demand — effusively thanked Trump for a “bold, courageous, and historic decision” by a president “who understands Israel and its security needs.”

“Thieves,” was the concise description of the move from Ali Abunimah, the Palestinian-American activist and writer whose book, “One Country: A Bold Proposal to End the Israeli-Palestinian Impasse,” calls for a one-state solution to the conflict, with equal rights for Israelis and Palestinians. “But it’s good that the U.S. makes explicit its bias and removes once and for all the pretense that it was ever an ‘honest broker,'” he added.

Since Trump has now declared his support for Israel’s previously unrecognized annexations of both East Jerusalem and the Golan Heights, speculation naturally turned to what might come next: the annexation of most or all of the occupied West Bank. When Israeli citizens go to the polls on April 9, more than half a million Israelis who live in Jewish-only settlements in the West Bank will cast ballots. Millions of their Palestinian neighbors, who continue to live under military rule 52 years after the Six-Day War, remain disenfranchised, with every aspect of their lives controlled by an Israeli government they have no say in choosing.

According to the U.N., the population of the Israeli-occupied Golan Heights is close to 50,000, and just over half are indigenous Syrian Druze — an Arab minority who practice an offshoot of Islam — while 23,000 are Israeli settlers who live in 34 Jewish-only settlements. As the U.N. rights council reported in January, “Syrian residents of the occupied Syrian Golan continued to face challenges due to discriminatory planning and zoning policies that favor illegal Israeli settlements. These policies make it nearly impossible for Syrian residents to build, plan, or expand their homes and village infrastructure.”

About 90 percent of the territory’s Syrian residents have refused to take Israeli citizenship, which would give them the right to vote and run for office in local elections.

“When Israel annexes the West Bank,” Lara Friedman, president of the Foundation for Middle East Peace in Washington, observed on Twitter, “Trump can just copy-paste this same text, change ‘Golan’ to ‘Judea & Samaria,’ and presto — with one final tweet, the Israeli-Palestinian conflict will be resolved!”

Trump’s decision to cede the Golan to Israel, following his move of the U.S. Embassy to Jerusalem, “pretty much tells us where the Kushner peace plan is going,” Paul Danahar, a former BBC Middle East bureau chief, tweeted. “It will likely recognise all of Israel’s ‘facts on the ground’ across most of the disputed regions. The weakness of the Palestinian Authority will be exploited and when it refuses to accept what’s on offer, the administration will throw its hands in the air, blame Palestinian intransigence and begin to formally recognise Israel’s claims on parts of the occupied West Bank.”

“There is almost an unseemly haste from Saudi Arabia and Israel to refashion the region as they want it while they have what has proved to be the most pliable US administration in modern history where the Middle East is concerned,” Danahar concluded.

Yousef Munayyer, executive director of the U.S. Campaign for Palestinian Rights, made the same point in a slightly less nuanced way.

If you want to understand Israeli policy toward the US during the Trump admin just think of that old game show Supermarket Sweep; they have limited time to grab as many items as they can.

This article was revised to add reaction to Donald Trump’s recognition of Israel’s annexation of the portion of the Golan Heights it seized in 1967 and the president’s interview with Fox Business News. The headline was also adjusted to reflect the fact that the American president’s statement does not alter international law, under which the territory remains occupied.