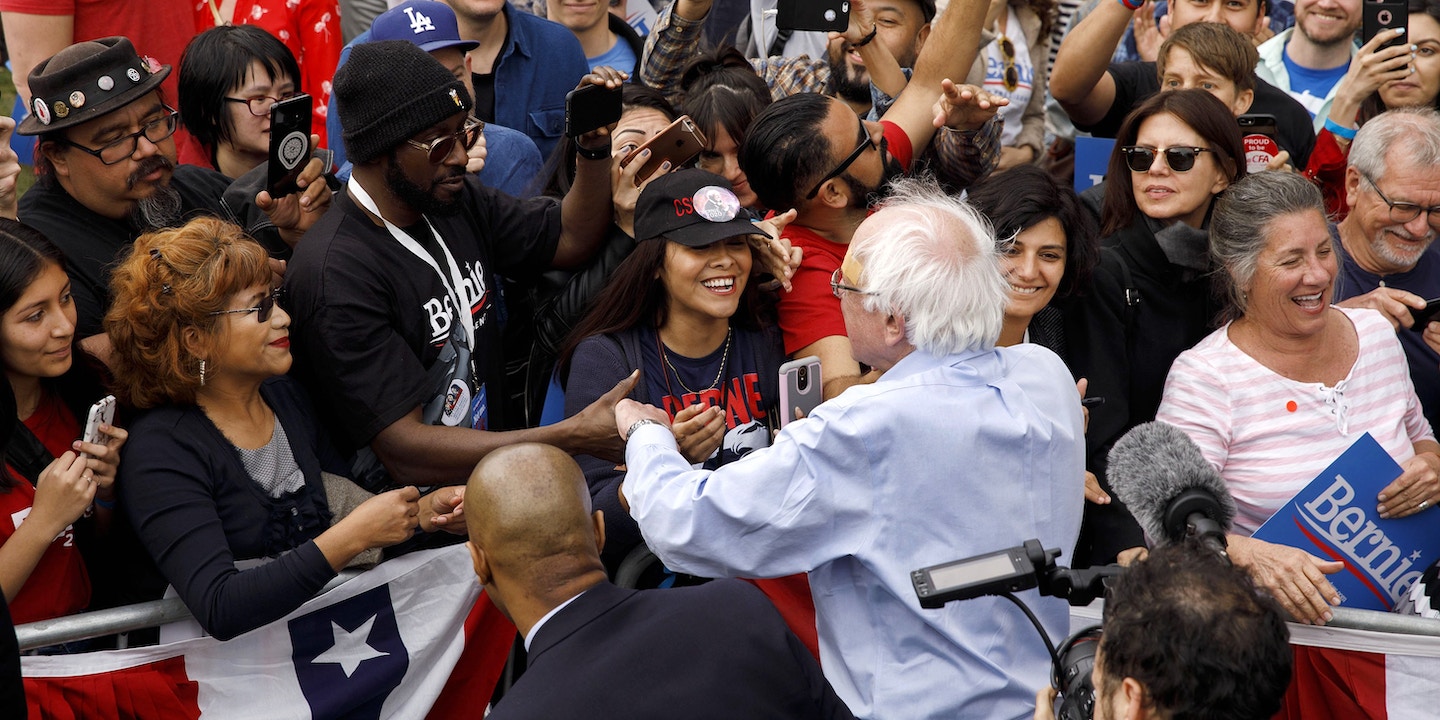 Vermont Sen. Bernie Sanders is leading every other presidential candidate in support from Hispanic voters, who make up a significant chunk of his base, recent polling finds. Sustaining this support will be critical to Sanders’s shot at the Democratic nomination, as Latinx voters will be the largest racial or ethnic minority group in the electorate by 2020, and wield greater influence over the outcome of the nomination than in previous elections due to changes in the primary calendar.

The polling, which was done by Morning Consult and shared with The Intercept, shows that Sanders’s support among Hispanic voters is at 33 percent, though those results are not broken down by age, which could be a determining factor in the primary vote. Sanders generally performs best among young voters, and a turnout of young Latinx voters would likely benefit him more than if older Latinx voters show up to the polls.

Former Vice President Joe Biden, who is also considered a leading candidate despite not having declared his run for office, is the only contender who comes close to Sanders’s level of support, with 24 percent of Latinx voters polled putting their weight behind him.

Super Tuesday, which will fall on March 3, 2020, will include California and Texas, two delegate-rich states that also happen to have the largest Latinx populations in the country. (As recently as 2016, California held its presidential primary in June.) Then on March 17, Democratic candidates will face sizable Hispanic populations in Arizona, Florida, and Illinois. In Nevada, where roughly 28 percent of its population is Hispanic, will hold its caucus in late February, will expand in-person early voting to four days next year.

After Biden, former Texas Rep. Beto O’Rourke, who speaks fluent Spanish, comes in third place at 13 percent among Hispanic voters. Sen. Kamala Harris comes in fourth place at 8 percent, then Sen. Elizabeth Warren at 7 percent. Meanwhile, Julián Castro, the only Latino in the Democratic primary race, comes in at 4 percent. Sens. Kirsten Gillibrand and Amy Klobuchar, and Pete Buttigieg, mayor of South Bend, Indiana, are all under 3 percent. The Morning Consult survey was conducted between March 25 and 31, with a sample size of 1,515 Hispanic voters.

Democratic candidates have historically treated Latinx voters as an afterthought, relying on last-minute Spanish-language ads. This year, even as candidates are recognizing the importance of Latinx outreach, many have resorted to using awkward Google-generated translation. (On Sanders’s website, only the landing page is translated into Spanish.)

The Sanders campaign has been making a concerted effort to address the myth of having a monolithic “Bernie bro” base of support, as well as addressing the legitimate questions raised about the overwhelming whiteness and maleness of his campaign staff during his 2016 run. On a recent press call, Sanders campaign manager Faiz Shakir said that roughly 40 percent of the campaign’s staff are people of color, and women are in the majority.

Though the first primaries are 10 months away and early polling isn’t predictive of the outcome, Sanders appears to be performing well based on other metrics, like first-quarter fundraising. His campaign raised more than $18.2 million from over 500,000 donors since he entered the race in February. Harris has raised $12 million, and unlike Sanders, is also courting large-dollar donors. O’Rourke on Tuesday reported raising $9.4 million in 18 days, but hasn’t yet broken down the numbers in detail.