The Democrats are using a technical loophole in the Federal Election Commission’s designations for PACs to take corporate cash. Jason Crow was one of the victorious Democrats who ran in last year’s midterm election on a promise to reject campaign cash controlled by business interests. In one of his first television commercials in the campaign, Crow, now a member of Congress from Colorado, touted his pledge not “to take a dime of corporate PAC money.” Recent campaign finance filings reveal that, about two weeks after being sworn into office, Crow accepted $5,000 from the American Hospital Association PAC, which represents public and private hospital companies across the country.

The Colorado Democrat is one of several newly elected House Democrats to have run on a pledge to eschew corporate money, but have found a broad loophole to begin collecting funds from political action committees affiliated with big business.

Democrats harnessed the pledge to take no corporate money as part of a commitment to reduce the influence of special interests in Washington. The candidates — some now elected officials — are part of a wave of progressive Democrats harnessing grassroots energy and discontent with politics as usual.

Those sentiments have filtered up to Democratic legislative initiatives. For congressional Democrats’ symbolic first bill of the new session, the party rallied behind the For the People Act of 2019, which contains sweeping provisions on voting rights, ethics reform, and an overhaul of the campaign finance system designed to limit the reach of big business over elections.

Some lawmakers, however, are now finding ways to inch away from the spirit of the pledge that helped distinguish their campaigns and land them in office.

Some Democrats who pledged not to take corporate PAC money are leveraging the different FEC designations to stay true to the letter of their promises while violating their spirit.

The pledge loophole being exploited by these Democrats hinges on the Federal Election Commission’s designations for noncandidate-affiliated PACs. The elections regulator allows six different registrations, which include corporate, labor union, and trade association PACs. Trade associations are private groups typically formed by a collection of businesses from the same industry to advance shared interests in politics and public policy. Oil companies such as Chevron and Exxon Mobil, for instance, are represented by the American Petroleum Institute. Banks have the American Bankers Association and the Financial Services Roundtable.

Though the groups are not directly designated as corporate PACs — which are set up by for-profit companies and only take money from a particular company’s employees — they nonetheless represent infusions of corporate money into electoral politics by operating as coalitions to advance shared industry lobbying goals.

Some Democrats who pledged not to take corporate PAC money are leveraging the different FEC designations to stay true to the letter of their promises while violating their spirit.

Paul S. Ryan, the vice president of Common Cause, which opposes corporate money in politics, noted that the differences between corporate trade association and corporate are minor at best.

“If a candidate has pledged not to take corporate PAC funds, I would expect that candidate to likewise forego trade association PAC funds because the money’s coming from the same place: corporate stockholders, executives and administrative personnel,” added Ryan. “A candidate can cite a technical distinction between corporate and trade association PACs in an effort to wiggle out of the pledge, but there’s no principled distinction between the two.” 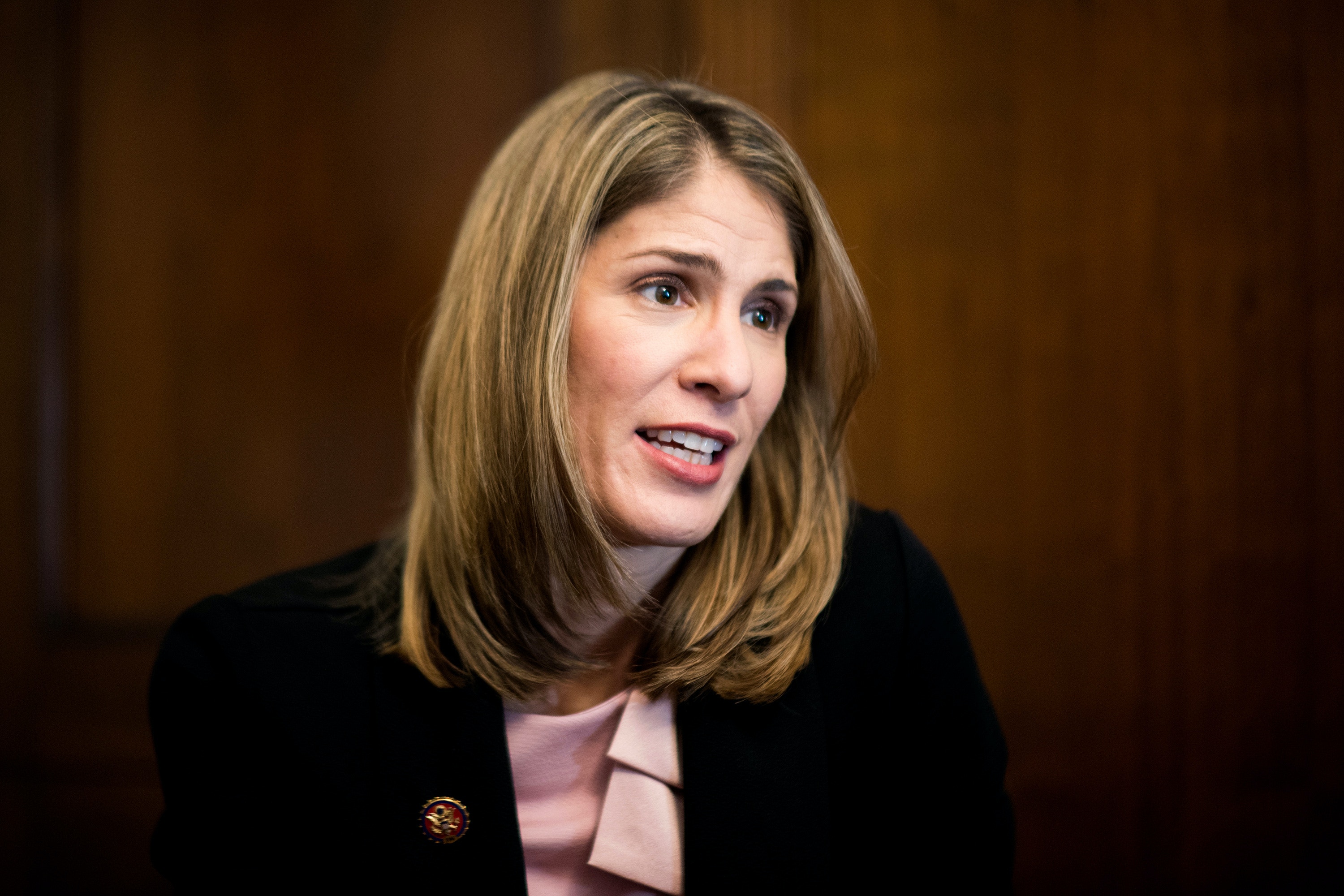 One politician who cited these loopholes in the pledge to take corporate money is Rep. Lori Trahan, D-Mass., who was elected last November.

“I firmly believe that we need to root out the corruptive influence of money in politics which is why I refuse to take any money from corporate PACs,” Trahan wrote last year, when she was a candidate, as a way to explain how she differs from others in the race.

In the run-up to Election Day and in the following months, however, Trahan accepted campaign cash from trade association PACs representing beer wholesalers, as well as grocery, hotel, hospital, and cable industry groups.

The week before Election Day, the Food Marketing Institute, which represents grocery giants Walmart, Safeway, and Kroger, gave Trahan $1,000. Around the same time, the American Hotel and Lodging Association, which lobbies on behalf of Marriott International and Wyndham Hotels, also chipped in $1,000. In December, after her election, Trahan received a contribution of $1,000 from the Internet & Television Association, known as NCTA. The trade group represents telecommunications and broadcast giants like Comcast, Cox Communications, and AT&T-WarnerMedia.

In response to The Intercept’s inquiries, Trahan’s campaign cited the distinctions in the FEC designations, saying that the industry money came in the form of trade groups, not an individual companies, so it does not technically violate her campaign pledge.

The Democrats’ evasion of their pledges raises the question: How can politicians decry the influence of corporate money, but say there’s no problem when two or more corporations partner for influence?

Crow’s campaign is advancing the same excuse. Anne Feldman, a spokesperson for Crow, said that the American Hospital Association is registered as a trade association, not a corporate PAC, in an email to The Intercept.

The distinction is a technical one. In practice, the American Hospital Association represents the agenda of the hospital industry, including Tenet Healthcare and HCA Corporation, two corporate mega-chains that constitute the largest donors to the AHA PAC.

“Rep. Wild does not accept contributions from corporate PACs, the PACs you inquired about are not corporate PACs,” wrote Zoe Wilson-Meyer, a spokesperson for the Wild campaign, in response to an inquiry from The Intercept about the AHA PAC money, as well as donations from the cable industry, candy industry, and real estate industry.

Axne’s office did not respond to requests for comment.

“Congressman Kim does not accept contributions from corporate PACs,” said Anthony DeAngelo, a spokesperson for Kim’s campaign, adding that the AHA PAC is not technically a corporate PAC.

During his fierce election campaign last year, Kim said he would “always refuse corporate PAC money,” a pledge he used to strike a contrast with his opponent, Republican incumbent Tom MacArthur.

“The contributions you inquired about are not from corporate PACs,” wrote Brian Sowyrda, a spokesperson for Torres Small, in response to an inquiry. “Rep. Torres Small will remain committed to not accepting corporate PAC money based on the standards set by End Citizens United.”

End Citizens United is a relatively new group formed by former Democratic campaign staffers that championed the no corporate PAC pledge during the midterm elections. The group says it does not formally view corporate trade association PACs as corporate money.

“Every time a member of Congress says no to corporate PAC money, it’s a blow to the power of special interests in Washington and a win for the American people,” said End Citizens United spokesperson Patrick Burgwinkle, in a statement to The Intercept. “Our government should work for the people, not corporate bottom lines and members who refuse corporate PAC money should be applauded for their leadership.”

Despite the lack of mechanisms to enforce any campaign trail promises, voluntary campaign finance pledges are an important first step to reform, said Brendan Fischer, director of the Campaign Legal Center, a campaign finance watchdog. Fischer did, however, point out that the no corporate PAC pledge, limited as it may be, appears to have had some impact, with lobbyists recently complaining to Beltway press that it has become more difficult to buy their way into mingling with lawmakers.

“That being said,” Fischer continued, “if the no corporate PAC pledge is supposed to signal a candidate’s support for limiting corporate influence on politics, then taking money from a corporate trade association’s PAC seems to undermine their position.”

“It is a positive development that candidates are feeling pressure to walk the walk.”

Fischer said, “It is a positive development that candidates are feeling pressure to walk the walk.”

The latest entry into the Democratic presidential race, Rep. Eric Swalwell, D-Calif., is a case in point. Earlier this week, Swalwell announced his intention to seek the office of the presidency, declaring that his bid wouldn’t accept corporate campaign cash.

“No corporate PAC money accepted! Together, we can clean the system of dirty maps and dirty money,” reads Swalwell’s presidential campaign website.

The promise, though, comes as the California Democrat has accepted tens of thousands of dollars from corporate PACs this calendar year, including checks from the pharmaceutical, defense, and banking industries, along with corporate cash from trade association PACs. Asked how the candidate could decry this form of campaign cash while collecting it only weeks later, his office did not return a request for comment.

“Well, that’s really a technicality, now isn’t it?” says Jessica Levinson, a professor at Loyola Law School in Los Angeles. “They like the money and there’s a lot of money there. I think in terms of the pledge they took, everybody understands what that’s intended to mean. It means ‘I’m not going to be beholden to corporate interests.’”

Levinson said that while lawmakers appear to be technically complying with their promise, the splitting hairs between corporate trade association cash and corporate cash might “feel like a distinction without a difference” for most voters.