Trump’s Veto on Yemen War Is a Sign That the Strongmen in the U.S. and Saudi Arabia Are Winning

The veto, for all its cynical implications about the state of U.S. foreign policy, should also concern Americans at home. 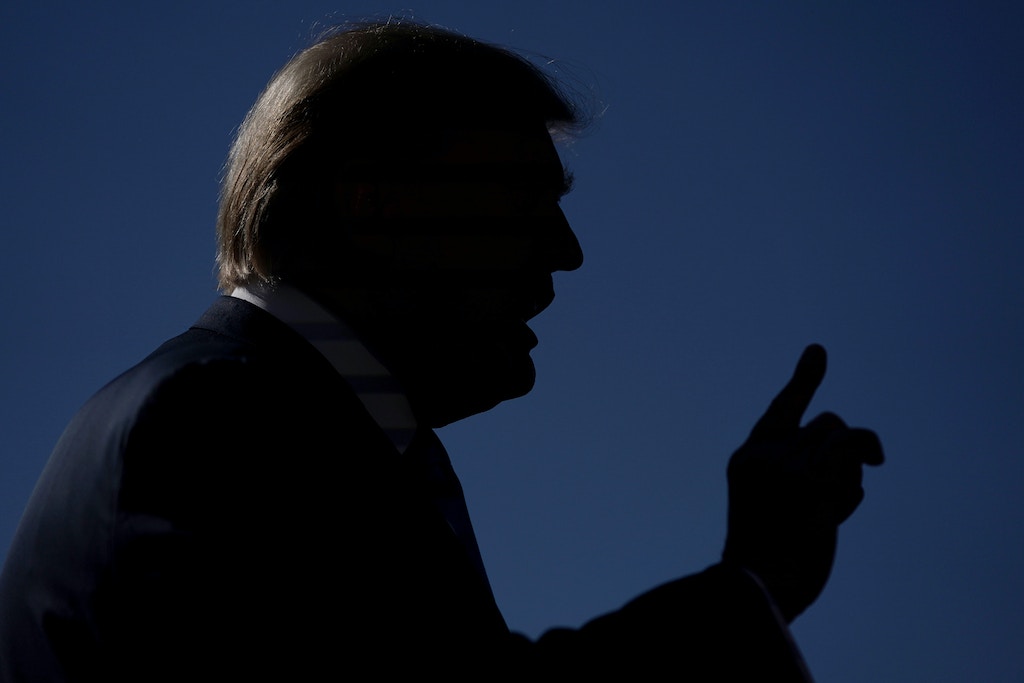 President Donald Trump speaks to members of the media prior to his departure from the White House on April 10, 2019 in Washington, D.C.

On Tuesday, Donald Trump invoked his veto power for only the second time in his presidency. Trump’s move struck down a congressional resolution to end U.S. support for the Saudi-led war in Yemen. In doing so, he stifled a moment of rare bipartisanship, flexing his own authoritarian tendencies to protect a fellow autocrat, the Saudi Crown Prince Mohammed bin Salman, who is known by the initials MBS.

By doing so, Trump not only signaled his loyalty to a prince who has been widely implicated in the murder of Washington Post journalist Jamal Khashoggi, as well as the imprisonment and torture of numerous human rights activists, but he has also ensured that the U.S. would remain complicit in the world’s worst humanitarian crisis. Far from an effort to protect the Constitution, as Trump claimed, the veto was rather the latest example of the autocratic, tit-for-tat deal-making that has in recent years increasingly dominated the geopolitics of the Middle East.

Far from an effort to protect the Constitution, as Trump claimed, the veto was rather the latest example of the autocratic, tit-for-tat deal-making.

Trump made clear that his decision was intended to augment his executive powers. In his statement, he called the bill — which would have made history as the first legislation under the 1973 War Powers Act to receive bipartisan support — a “dangerous attempt to weaken [his] constitutional authorities.” Trump said that scaling back U.S. involvement in the deadly Yemen conflict would imperil “American citizens and brave service members, both today and in the future.”

The bill, though, just like the president’s objection to it, had much more to do with Trump’s relentless and ill-advised devotion to MBS. The resolution first gained momentum in the aftermath of Khashoggi’s murder in October 2018, a crime that many — including the U.S. intelligence community — have linked to the crown prince. MBS is also responsible for leading the coalition of Persian Gulf states in its four-year offensive in Yemen, which has left thousands of Yemeni civilians dead and millions ravaged by famine and disease. In addition to overseeing this disastrous war, MBS has also ordered numerous crackdowns on his own civilians, including mass arrests and alleged torture of nonviolent human rights advocates.

By calling for an end to U.S. support for the war, Congress took aim at Trump’s obstinate and increasingly untenable loyalty to MBS. Since Khashoggi’s killing, even staunch supporters of the U.S.-Saudi relationship, such as Sen. Lindsey Graham, R-S.C., have grown critical of Riyadh. In contrast, Trump has persistently ignored the ongoing abuse of Saudi human rights activists and downplayed the mounting catastrophe in Yemen, calling Saudi Arabia a “truly spectacular ally.”

It was no great surprise, then, to see the president resort to veto power to protect MBS’s disastrous Yemen campaign. Beneath the shallow appeals to constitutionalism and national security, Trump is acting in accordance with a now-familiar pattern: gravitating toward fellow strongmen and personality-driven deal-making. This entrepreneurial narcissism has fueled much of the president’s volatile foreign policy, from his on-again-off-again “relationships” with Russian President Vladimir Putin and North Korean dictator Kim Jong-un to his rabid devotion to building a wall on the Mexican border.

This trend has dramatic implications in the Middle East. Since the collapse of the Arab Spring and in the wake of years of foreign intervention, hopes of democracy in the region have in large part given way to a cast of authoritarian rulers. From MBS in Saudi Arabia to Recep Tayyip Erdogan in Turkey to the recently re-elected Benjamin Netanyahu in Israel, the region has grown increasingly polarized under hawkish, right-wing leaders.

Among this fray, Trump, along with his his son-in-law and adviser Jared Kushner, identified MBS as an ideal partner. The president and crown prince share an alarmist message of Iran as a regional menace and both use this stance to justify destabilizing policies, such as the dismantling of the Iran nuclear deal and the war in Yemen. Trump has also lauded MBS and the Saudis for their alleged work to curb extremism in the region, despite reports that Riyadh has cut deals with Al Qaeda fighters in Yemen.

The veto, for all its cynical implications about the state of U.S. foreign policy, should also concern Americans at home.

For his ongoing support, which includes billions in arms sales, Trump has expected cooperation from the Saudis on his own regional agenda, including in his efforts to resolve the Israel-Palestine conflict. Trump and Kushner are preparing to push for this “deal of the century” in coming months — a negotiation that has far more to do with backroom bargaining than any democratic or humanitarian concerns.

The veto, for all its cynical implications about the state of U.S. foreign policy, should also concern Americans at home. Tuesday’s announcement came barely a month after Trump’s first veto, which he used to enforce his border statement of emergency over congressional opposition. So Trump went to the outer limits of legality in pursuit of an irrational pet project, the so-called border wall with Mexico, at great financial and human cost. Such actions are only the logical extension of a presidency that began with the morally indefensible and constitutionally untenable “Muslim ban,” issued by executive order in the first days of the administration.

The president has repeatedly availed himself of these personalized, unilateral mechanisms of power. The effects of such a pattern cannot be held at bay by the occasional congressional override or dissident judge. Americans must recognize this dangerous erosion of democratic principles and, fighting fatigue, continue to resist.