The “Shelby Mafia” Is Muscling Through a Major New Bank Merger

Sen. Richard Shelby has managed to stock key positions with loyalists across industry and government. 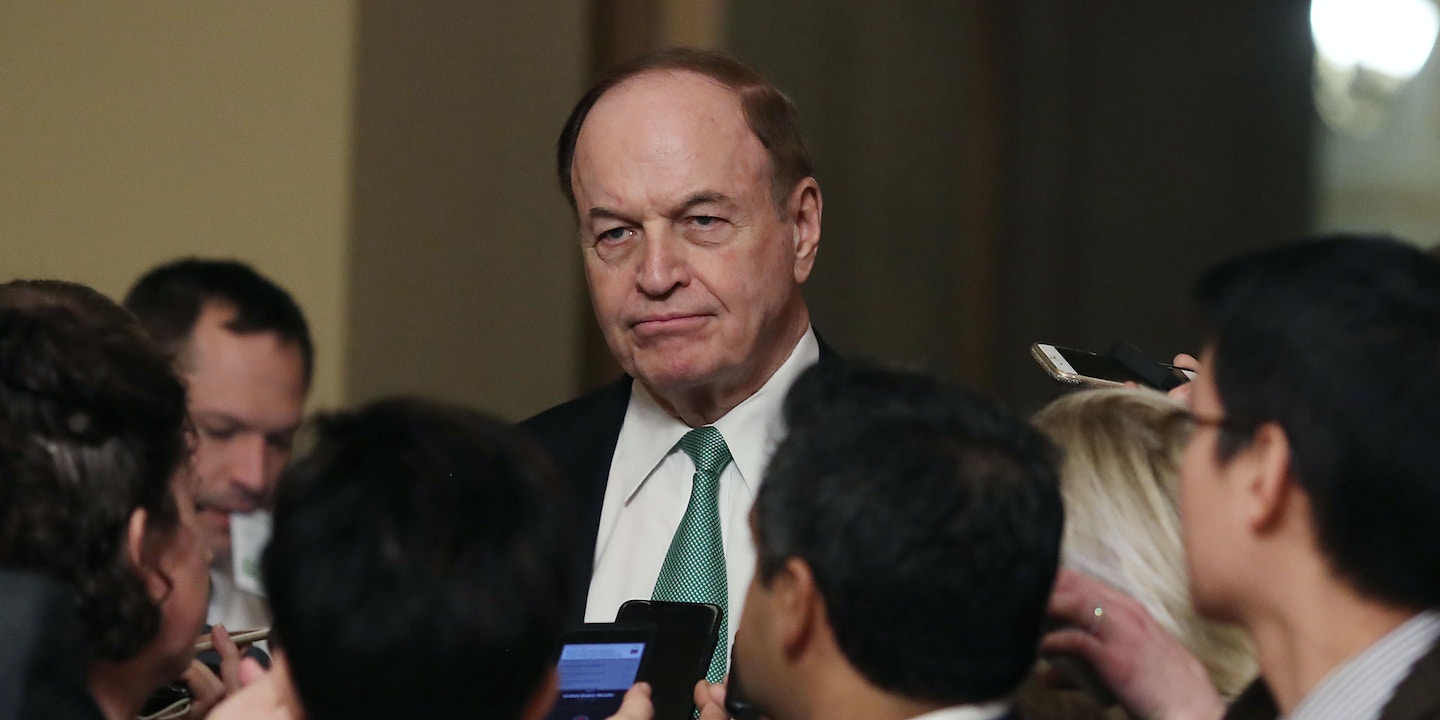 The main players in approving the $28 billion bank merger between SunTrust and BB&T, and the agency that will ultimately oversee it, can all be traced back to the same Senate office, led by Alabama Republican Richard Shelby. As the former chair of the Senate Banking Committee, Shelby wields significant sway over the direction of conservative policy on financial regulation; alumni of his office are sprinkled throughout regulatory agencies and K Street. On Capitol Hill, they even have a name for it: the “Shelby mafia.”

“The Shelby mafia is representative of how the Republican establishment expertly cultivates and deploys likeminded people throughout the government and the broader political ecosystem,” said Jeff Hauser, director of the Revolving Door Project at the Center for Economic and Policy Research. No similar system exists on the left and certainly not out of an individual senator’s office.

Snagging a staff position with Shelby sets up young conservatives on both sides of the political lobbying complex. Republican administrations want you for their executive branch, to ensure expert advancement of anti-regulatory policy. Banks want you for your network of contacts, which you can tap at virtually every federal agency critical to a financial institution. And you can always slide between one and the other, gaining contacts and prestige along the way and raising the fees you can command.

But the Shelby mafia’s role in the SunTrust-BB&T merger is even a step beyond.

As The Intercept has reported, the SunTrust-BB&T merger, which would create the nation’s sixth-largest commercial bank, was helped along by the bipartisan bank deregulation bill passed last year. Regulators took the opportunity from that law to not only reduce regulatory standards for banks with under $250 billion of assets (which includes SunTrust and BB&T separately), but also for banks up to $700 billion (which would include the merged company, which would carry roughly $442 billion). The Federal Reserve used Section 401 of the legislation to reassess rules on banks and grant relief from certain capital and liquidity requirements, as well as less frequent stress testing, in which the bank must show how it would fare under adverse economic conditions.

Assisting in that process from the outside was SunTrust’s head lobbyist, Mark Oesterle. For many years, Oesterle has been advocating for treating SunTrust differently than its larger counterparts. “We are not Wall Street banks, but we face the same regulatory regime as a Wall Street bank,” Oesterle said in 2012, in a story about how large regional banks were opening up lobbying operations, “and staffing them with seasoned Washington hands.”

Oesterle is one such Washington hand. He started his career as a legislative aide to Shelby and then joined the Senate Banking Committee in 2001, when Shelby was ranking member and later chair. After serving as deputy staff director and then chief counsel for a decade, Oesterle left the committee in early 2011 to join lobbying group Reed Smith. It was a good time to spin out to K Street; the Dodd-Frank financial reform had just been written, and banks were eager to put their stamp on the rule-making process. After working for a number of financial institutions at Reed Smith, Oesterle became SunTrust’s main lobbyist in Washington in 2012.

As a big-bank lobbyist, Oesterle can draw upon his ties to Shelby. “The so-called Shelby mafia not only works in sync across government to undermine regulation meant to keep us safe from rapacious banks,” Hauser noted, “but they make fellow Shelby alumni working in the swamp rich as well.”

Mark Calabria, a senior staffer on the banking committee at the same time as Oesterle, was recently confirmed as head of the Federal Housing Finance Agency, which oversees mortgage giants Fannie Mae and Freddie Mac. William Duhnke, a former staff director and general counsel for the banking panel, has since January 2018 been the chair of the Public Company Accounting Oversight Board, which monitors financial auditing. Hester Peirce and Elad Roisman, two of the three Republican commissioners on the Securities and Exchange Commission, are former Shelby staffers; like Oesterle, Roisman was chief counsel. Roisman replaced Michael Piwowar on the SEC, and he was formerly chief economist for Shelby’s banking committee. He now serves as executive director of the Milken Institute.

But with SunTrust’s merger with BB&T, Oesterle will rely on two Shelby mafia members in particular. Jelena McWilliams was chief counsel and deputy staff director to Shelby on the banking committee in 2012 and 2013. She spun out to become chief legal officer at Fifth Third Bancorp, another large regional bank, and was confirmed as chair of the FDIC in June of last year.

The FDIC plays a dual role in the SunTrust-BB&T merger. Under the Bank Merger Act of 1960, the FDIC must approve any deals that would create a state bank without a national charter. That’s the intention of this deal, putting the FDIC in the driver’s seat. In addition, as Sen. Sherrod Brown, D-Ohio, wrote in a letter to McWilliams on Tuesday, the merger “would also result in the largest bank the FDIC has ever supervised as the primary federal regulator.” That means that the chief lobbyist for this potential mega-bank and the chair of its primary regulator both come out of the Shelby orbit.

Sue Mallino, a spokesperson for SunTrust, said that “Mark has not connected with chair McWilliams on the merger.” She added that there will be many opportunities for public comment throughout the process and that “we’re confident the BB&T-SunTrust combination of two purpose-driven companies will be positive for consumers and communities.”

In the letter, Brown asked for the FDIC to decide this merger at the board level, rather than under delegated authority by career staff. He stressed the importance of that decision. Financial institutions of smaller sizes than this merged entity, like Washington Mutual and Countrywide, were significant drivers of the 2008 financial crisis. In addition, SunTrust and BB&T have overlapping bank operations in 80 markets and 740 branches within a two-mile radius; subsequently, they could dominate several areas of the country. Branch closures would further create job loss in those areas.

A board-level review would put the FDIC’s five members on the record on whether the merger would affect competition and systemic risk. However, those five slots are not currently filled. McWilliams and two outside members — Office of the Comptroller of the Currency head Joseph Otting and Consumer Financial Protection Bureau Director Kathy Kraninger — are the only ones seated. The two positions intended for Democrats, the vice chair and the internal director, have been vacant for many months.

Democrats recommended Martin Gruenberg, the former FDIC chair, and Graham Steele, a former Brown staffer, for those positions many months ago. But they have not been formally nominated by President Donald Trump. The official responsible for financial regulatory personnel in the White House is named Andrew Olmem. He was deputy staff director and chief counsel to Shelby on the Senate Banking Committee from 2005 to 2013.

There’s an insidious nature to the role of the ex-Shelby officials in this matter. Democratic regulators asking too many questions about this big-bank merger could prove damaging. So Olmem has been slow-walking the Democratic FDIC recommendations. That helps McWilliams, who as FDIC chair has no formal opposition confirmed at the agency, and it helps Oesterle, greasing the wheels for the merger of his bank. And all of this goes back to Shelby.

“Their fingerprints are all over SunTrust-BB&T merger,” said David Segal, co-founder of progressive organization Demand Progress. “The Republicans — especially Shelby and his acolytes — are efficient and ruthless.”

The Intercept asked the FDIC if McWilliams sought formal ethics guidance to clear her for involvement in the merger, given the connections to Shelby’s office. The FDIC said they would not provide a comment. Shelby’s office did not return a request for comment.

In a separate letter, Brown called on Trump to nominate a full slate for the FDIC board, citing in particular the need for a complete panel to analyze the SunTrust-BB&T merger. “In an environment where there is bipartisan concern over banking industry consolidation and its effects on community banks, the costs and benefits of this merger call for careful scrutiny, and the full attention of a complete FDIC board,” Brown wrote. He had previously joined colleagues in urging Trump to nominate the FDIC members, but not in the context of the SunTrust merger.

Regulators will hold public meetings on the merger in Charlotte, North Carolina, on April 25 and in Atlanta on May 3. Both are areas where BB&T and SunTrust are already prominent. SunTrust Park is the home of the Atlanta Braves; BB&T Ballpark houses the minor league Charlotte Knights. Both are “stadium banks,” not big enough to be global names, but big enough to have a stadium named after them.

Bank mergers have accelerated during Trump’s presidency, with faster approval times. But regulators have never been much of a barrier. Since 2006, the Fed has rejected zero of 3,819 applications. In February, Sen. Elizabeth Warren, D-Mass., called the merger approval process at the regulators “a rubber stamp.” The Shelby mafia serves as an assist to that process.

Among liberals who focus on executive branch personnel, there’s almost a grudging respect for the pipeline that Shelby’s office has arranged for conservative staff. “It is worth asking why Democrats have not been able to groom, cultivate, and deploy talented young people to work in the public interest on the same scale as Shelby and McConnell’s Republicans,” Hauser said. Liberals have been fuming at Senate Minority Leader Chuck Schumer for a series of missteps in getting minority members onto independent commissions.

Moreover, the type of executive branch appointees Democrats elevate are qualitatively different, said Segal. “Democrats’ first instinct is to seek to appease their dual masters — a corporatist funding class and a populist base of voters — by identifying appointees who offend neither and are destined to accomplish little.”

The Sacklers are responsible for hundreds of thousands of opioid deaths in America. White, a political independent, was Barack Obama’s choice for SEC commissioner. After that stint, she returned to Debevoise & Plimpton, the law firm for numerous corporations she formerly regulated.

“You don’t want to mess with Mary Jo,” Obama said when he nominated her.

This story previously misidentified one of the nominees Democrats are recommending for the FDIC as Thomas Curry. It is Martin Gruenberg.