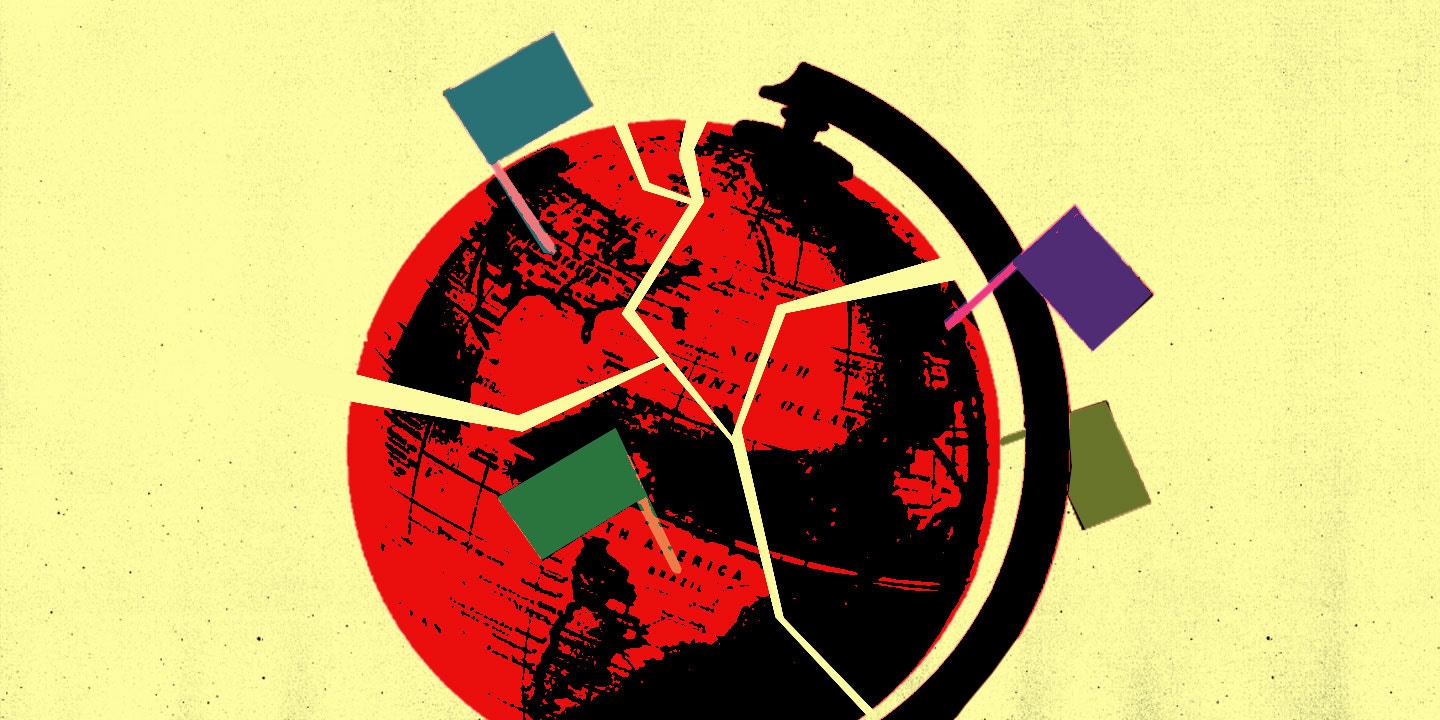 Over the past decade, far-right nationalist movements have swept into power across the world, from the United States to India, from Brazil to Europe. Every movement needs its texts. Today, the nationalists seem to have found one: “The Virtue of Nationalism,” by the conservative Israeli philosopher Yoram Hazony. Among other plaudits, the book was recently awarded “Conservative Book of the Year” by an influential conservative campus organization. If nothing else, the award is an indicator of where conservative thought is headed.

Hazony has a gift for unpacking complex ideas in an accessible way. The problem is that his ideas are not very consistent. They are also potentially dangerous, especially for people living in small, isolated countries like his own.

Nationalism has a reputation for starting wars, a painful historical legacy that caused the idea to fall out of favor. But “The Virtue of Nationalism” makes the case for embracing it again as a positive force. Hazony argues that nationalism is the only defense against “imperialism” — defined today, by Hazony and some other nationalists, as the tyranny of universal values and liberal international organizations like the United Nations, the North Atlantic Treaty Organization, and the International Criminal Court. The book is a rallying cry against a world of universal rights and laws. It calls instead for each individual nation to govern itself as it sees fit. Such an arrangement will bring greater peace to the world, Hazony suggests, as each country focuses on tending its own garden instead of going on ideological adventures abroad. There’s an important subtext running through the book: Hazony’s anger over international criticism of Israeli human rights abuses. Despite the incredible international support extended to Israel over the years, Hazony feels that recent criticisms of its abuses amount to “a shaming campaign of a kind that few nations have historically experienced.” For this insult, he’s ready to cast all the liberal institutions of the world — the ones that have been sustaining and defending Israel for decades — as its mortal enemies. He appears positively gleeful about the potential destruction of liberal internationalism at the hands of the new nationalist vanguard.

Hazony’s disdain for international norms and the organizations that promote them might already be winning out. President Donald Trump is in the White House; Brexit is casting a pall over the European Union; China is focused on its own development with little else in mind; and authoritarian leaders are taking power in northern Europe, South Asia, Latin America, the Middle East, and elsewhere.

When I noticed high-profile conservatives in the United States praising “The Virtue of Nationalism,” I picked up a copy, expecting to be grudgingly impressed by an argument that I disagreed with. It failed to deliver on even that modest goal. The whole argument instead felt like an extended tantrum. In that sense, at least, it partly reflects the mood of the historically untutored nationalist movements that are upending politics all over the world.

The case for the new nationalism is justified by an old ideology: the anti-imperialism of the right. This version of anti-imperialism is distinct from its left-wing variant. Right-wing anti-imperialism holds that outsiders have no legitimate interest in what countries do within their own borders. Unlike liberals and leftists, they recoil from the idea of global standards for human rights and governance. In their worldview, the major imperialists of today are the international institutions that seek to impose such standards — notably the EU and the U.N.

“The Virtue of Nationalism” is in large part a work of nostalgia — calling back to and justifying historic notions of nationalism.

These institutions, Hazony argues, are “a version of the old imperialism” which bludgeons the sovereignty of nations. Their tools are global governance and the ideology they seek to impose is liberalism. In the words of former Trump adviser Steve Bannon, they are the “globalists,” a term that Hazony also uses. The heroes fighting this global empire, meanwhile, are anti-EU political movements, Trump supporters, and illiberal governments like Brazil and Hungary.

“The Virtue of Nationalism” is in large part a work of nostalgia — calling back to and justifying historic notions of nationalism. As for the baggage that entails, Hazony gets around it by claiming that the two world wars it helped foment happened because the countries involved weren’t really nations. Germany under the Nazis was actually an “empire” because it sought to interfere in the affairs of others, as the EU does. Even World War I happened not because of a scramble to steal the wealth of overseas colonies, the traditional historical explanation, but because Europeans had been seduced by the idea of making their way of life universal. 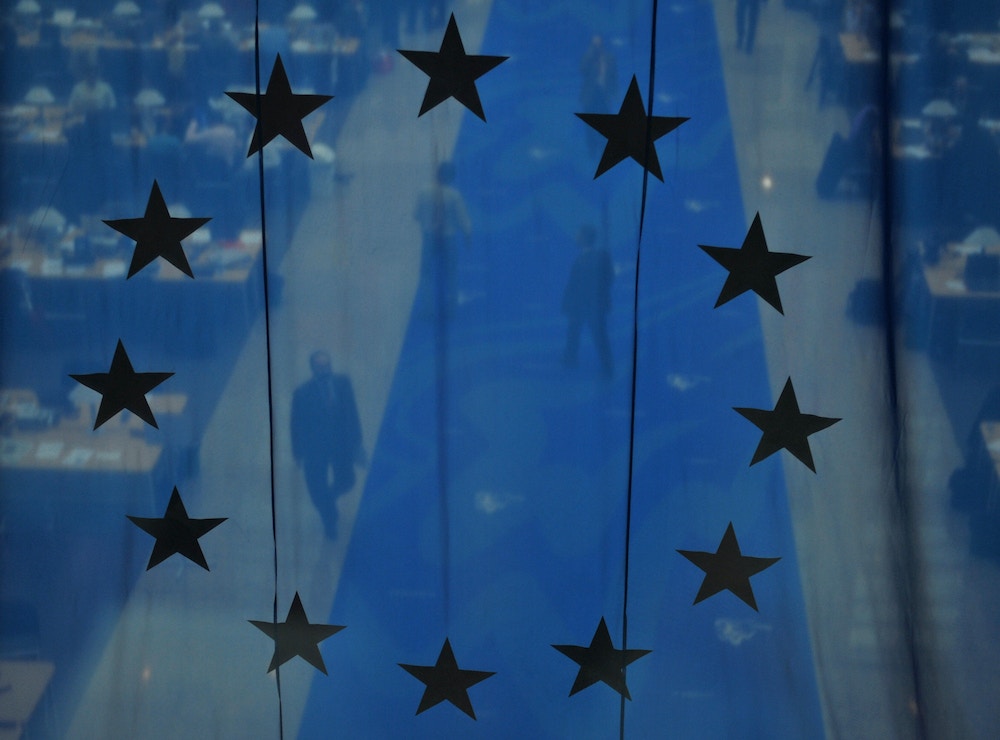 A press room is seen through an EU flag at the headquarters of the European Council in Brussels on March 14, 2008.

There are, of course, perfectly valid reasons to criticize institutions like the EU and NATO. These international bodies are often justly accused of entrenching inequality or privileging the interests of their most powerful members. Still, it’s hard to take seriously the claim that being a member of the EU is anything like being subjugated by Genghis Khan.

Unlike medieval villagers conquered by the Mongols, countries today fiercely compete to become members of the EU and NATO. They seek membership for the considerable economic and political benefits it brings. But they also do it because they’re afraid of traditional nations like Russia, which is not as peacefully inward-looking as Hazony’s book might suggest, despite having shed any pretense of wanting to spread a universal ideology. Seeing nationalism as a force for peace requires looking at both the past and present with some heavy blinkers.

As any good nationalist would be, Hazony is extremely defensive of his own country: Israel. Here’s how he portrays the Jewish state’s predicament: In a world overrun by liberal globalists, Israel stands out as a place that jealously defends its own sovereignty. For asserting the right to act as it sees fit, it has been shamed by the international community and its tyrannical human rights rhetoric.

Remarkably, for a book that talks about Israeli nationalism so much, the word “Palestinian” appears a grand total of once in its text: when the author asks in frustration why the world keeps haranguing Israelis about Palestinian statehood.

Alongside Israel, there are two other countries Hazony claims have been similarly victimized by the shaming campaigns of liberals and globalists: apartheid South Africa and Serbia under the dictatorship of Slobodan Milosevic.

Alongside Israel, there are two other countries Hazony claims that have been similarly victimized by the shaming campaigns of liberals and globalists: apartheid South Africa and Serbia under the dictatorship of Slobodan Milosevic. The reason for this is liberal racism. “The reason these people were singled out for special hatred and disgust, and for special punishment, is that white South Africans and Serbs are seen as Europeans, and are held to a moral standard that is without any relation to what is expected of their African or Muslim neighbors,” Hazony writes. It is axiomatic to him that whatever crimes white Afrikaners or Serbs commit must obviously pale in comparison to the barbarism of black Africans and Muslims.

For all his righteous defense of nationalism, Hazony’s argument against liberal imperialism is not even consistent. The U.S. invasion of Iraq in 2003 was justified in no small part on the grounds of spreading democratic values, even at the cost of hundreds of thousands of dead and maimed Iraqis. Incredibly, Hazony doesn’t seem to consider that imperialism. In the book, he suggests that the real imperialists during the war were the U.N. and EU officials complaining about American unilateralism. “Their problem,” Hazony writes, “is that the United States acts as an independent nation.”

It’s worth noting that Hazony’s hostility towards liberal internationalism is consistent with the calculus of Israel’s current leadership. Prime Minister Benjamin Netanyahu has made no secret of his enthusiasm for nationalist leaders like Brazil’s Jair Bolsonaro and Hungary’s Viktor Orban. These strongmen are apparently a refreshing change from the liberals who — having created, sustained, and defended Israel for decades — continue to make annoying inquiries about Palestinian statehood and human rights. 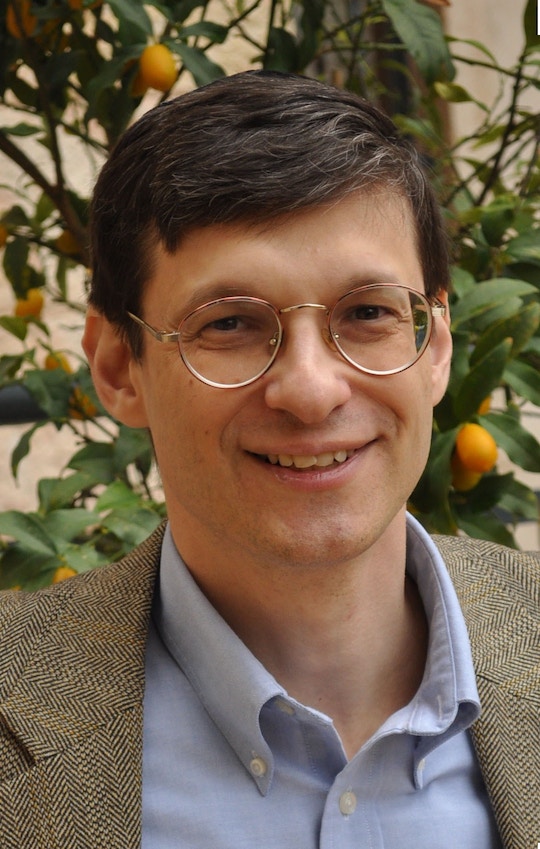 Israelis pining for the return of right-wing nationalism should think twice. It’s not clear that their country would do so well in such a world. The U.S.’s crucial support for Israel is frequently justified not on pure grounds of American national interests, but because of the two countries’ supposed “shared values,” their democratic characters — however specious, in Israel’s case — chief among these. As the world’s lone superpower, the United States has been waging wars in the Middle East for decades in the name of promoting liberalism and democracy. These wars have sometimes been justified as defenses of Israel, or have at the very least converged with Israel’s proclaimed security interests. If the U.S. shifts to a purely nationalist footing, this shared ideological interest disappears.

What might the foreign policy of a nationalist U.S. look like? A country focused more strictly on its own self-interest may find it more profitable to make peace with the populous, oil-rich nations of Iran and the Arab world rather than fighting endless wars against them over ideological differences. During the 2016 presidential campaign, Trump gave hints of these kinds of sentiments and the response to his candidacy suggests that a desire for this approach also lurks among significant segments of the American public. If the U.S. ever truly turns nationalist and abandons the liberal universalism that Hazony finds so oppressive, it would have less impetus to maintain its current approach towards the Middle East. A country with few friends like Israel would then have much more serious problems on its hands than it does today.

In Israel and beyond, the nationalist movements that we see across the world today are united by a sense of grievance. Spoiled by years of relative security and prosperity, even those who owe their very existence to liberal indulgence now consider the slightest demand asked in return to be a form of tyranny. If nothing else, Hazony’s book does a great job of encapsulating the psychology of the new nationalists.

“The Virtue of Nationalism” isn’t all bad, then. The book also restates some familiar criticisms of life in liberal societies, which stand accused of failing to provide a sense of meaning and shared purpose. Such critiques will always be poignant on some level. It’s a monumental irony, however, to see people in small, isolated countries like Israel now openly express nostalgia for the old world of nationalism. If history is any guide, they should be careful what they wish for.