Do Susan Collins and Cory Gardner Really Want to Make Their Re-elections About Keeping Kids in Cages?

Mitt Romney and Lisa Murkowski have condemned child separation. Will they confirm an advocate of the policy to lead ICE? 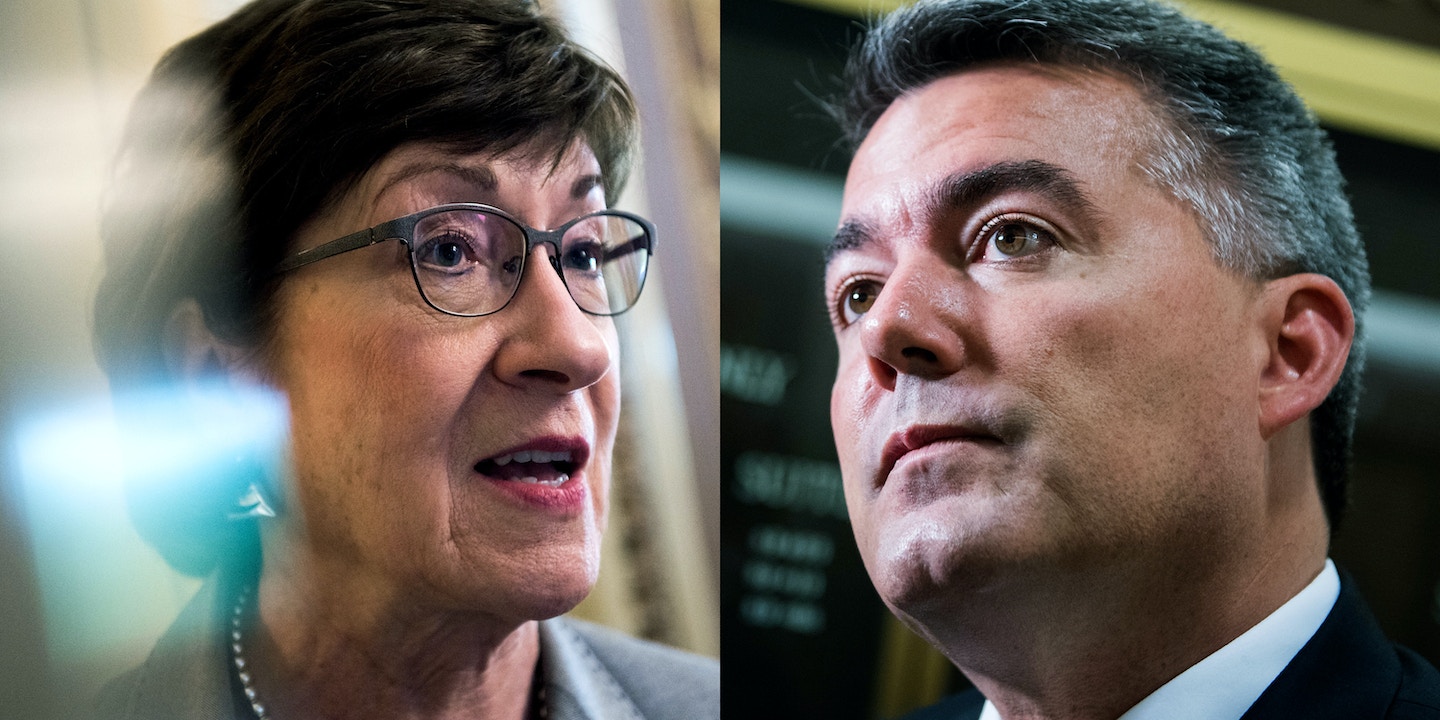 Having successfully completed the now-requisite Fox News-hosted audition for the Trump administration, Mark Morgan, nominated to be head of Immigration and Customs Enforcement, has a new gauntlet to run: the GOP Senate.

Morgan — a Marine, a former FBI agent, deputy sheriff, police officer, and a previous assistant commissioner for Customs and Border Protection’s Office of Internal Affairs — led Border Patrol during the last months of the Obama administration. He was ousted when Donald Trump came into office but has since taken a harder line on immigration, enough that Trump announced in a tweet Sunday that he’d tapped Morgan to lead ICE, dubbing him “a true believer and American Patriot.”

Morgan has publicly endorsed several of the president’s more aggressive immigration policies, including his plan for a border wall. He’s supported Trump’s policy — currently under judicial review — to force people seeking asylum to wait in Mexico while their cases are adjudicated. And he told Fox News host Tucker Carlson in April that Border Patrol “should be applauded” for keeping immigrant children in “cages.”

“Those cages, the reason why they’re designed that way is for the safety and security of the people that are in there,” Morgan told Carlson. In another April interview with the LA Times, Morgan said the U.S. needs to “stop the incentive” for people migrating. Trump said part of the reason he pulled a previous nominee to lead ICE was because he wanted a tougher policy at the border.

But even with a Republican-controlled Senate, it’s not certain Morgan will have enough votes to be confirmed, as Republicans hold 53 seats. Republican Sens. Susan Collins of Maine and Cory Gardner of Colorado, both of whom are up for re-election in 2020, are treading carefully on immigration as they’ve come under heightened scrutiny for how they position themselves on the issue in relation to Trump. Other members of the party have drawn a line at the administration’s family separation policy and shutting down the government over a border wall, leaving the question open as to how many will support Morgan. GOP Sen. Lisa Murkowski of Alaska has called the child separation policy “cruel” and Mitt Romney of Utah called it a “dark chapter” in American history, one he’s now being asked to co-write.

Morgan’s time in the Obama administration could give Collins and Gardner political cover, but the two are the most vulnerable Republicans facing re-election next year. Colorado and Maine voted for Barack Obama in 2008 and 2012, and both states also went for Hillary Clinton in 2016. In 2018, Democrats won a trifecta in Colorado, locking down control of the governorship and the legislature, and they pulled off the same feat in Maine, where they flipped the state Senate, flipped the governor’s mansion, expanded their hold on the state House, and also flipped a GOP-held U.S. House seat. A fundraising campaign launched by activist Ady Barkan during the Supreme Court confirmation hearings for Brett Kavanaugh has raised nearly $4 million for Collins’s eventual opponent.

Despite Morgan’s past as an Obama-era official, if Collins and Gardner support his nomination, they risk alienating voters in their states who see Trump’s child-separation policy on the border as a question of good versus evil.

Both Collins and Gardner broke with the party in January when they called for the president to end the last government shutdown without securing funding for his border wall. And Collins was one of a handful of Republicans who joined Democrats in opposing Trump’s emergency declaration in March. But Gardner sided with Trump in that case, and the Denver Post published a scathing editorial in response saying its 2014 endorsement of him was a mistake. The editorial board said Gardner had “been too busy walking a political tight rope to be a leader.” The issue, the board said, “is a constitutional crisis and one of Colorado’s two senators has failed the test.”

Collins told The Intercept she didn’t recall Morgan, though she knew he’d worked in previous administrations. “He was not someone that I had dealings with, so I really don’t have an opinion,” she said. Gardner said he hadn’t yet had a chance to look at Morgan.

Arizona Republican Sen. Martha McSally, also up for re-election in 2020, told The Intercept she knows Morgan but still wanted to vet him as well. “I worked with Mark when he was with Border Patrol. Very good relationship, he’s a smart guy. But like every nomination, I’d look through it thoughtfully, of course.”

West Virginia Republican Sen. Shelley Moore Capito said she liked Morgan after hearing him speak last week at a luncheon with Senate Republicans. “I met him, and I think very positive towards him,” she told The Intercept. “I think we need a permanent head of ICE, and I think he would be a great selection. I’ll have to learn more about him, but on the face of it, yes,” she said when asked if she’d support him. Capito said she had “no idea” whether Morgan would have enough support in the Senate to be confirmed.

While Kirstjen Nielsen’s abrupt exit last month from the Department of Homeland Security — the agency that oversees ICE — was seen as another sign of incompetence and disorganization on the part of the Trump administration, immigrant rights advocates also saw it as a rebuke of failed policies. Nielsen left amid outrage over family separations, and organizers saw her ousting as a sign that even administration officials thought they’d gone too far. Others, though, saw it as a win for White House adviser Stephen Miller’s hard-line anti-immigrant agenda, making room for him to bring in operators even more extreme than Nielsen. “We were at the forefront of holding Secretary Nielsen accountable for the role she played in crafting and executing the family separation crisis,” said Ana Maria Archila, co-executive director of the Center for Popular Democracy, in a statement to The Intercept. “If Mark Morgan plans to continue this hateful legacy, we will be on the front lines making sure he is held accountable for the suffering this administration has caused in our communities.”