If Julian Assange is extradited from Britain to Sweden to face a rape allegation, his extradition to the U.S. could be delayed or even blocked. 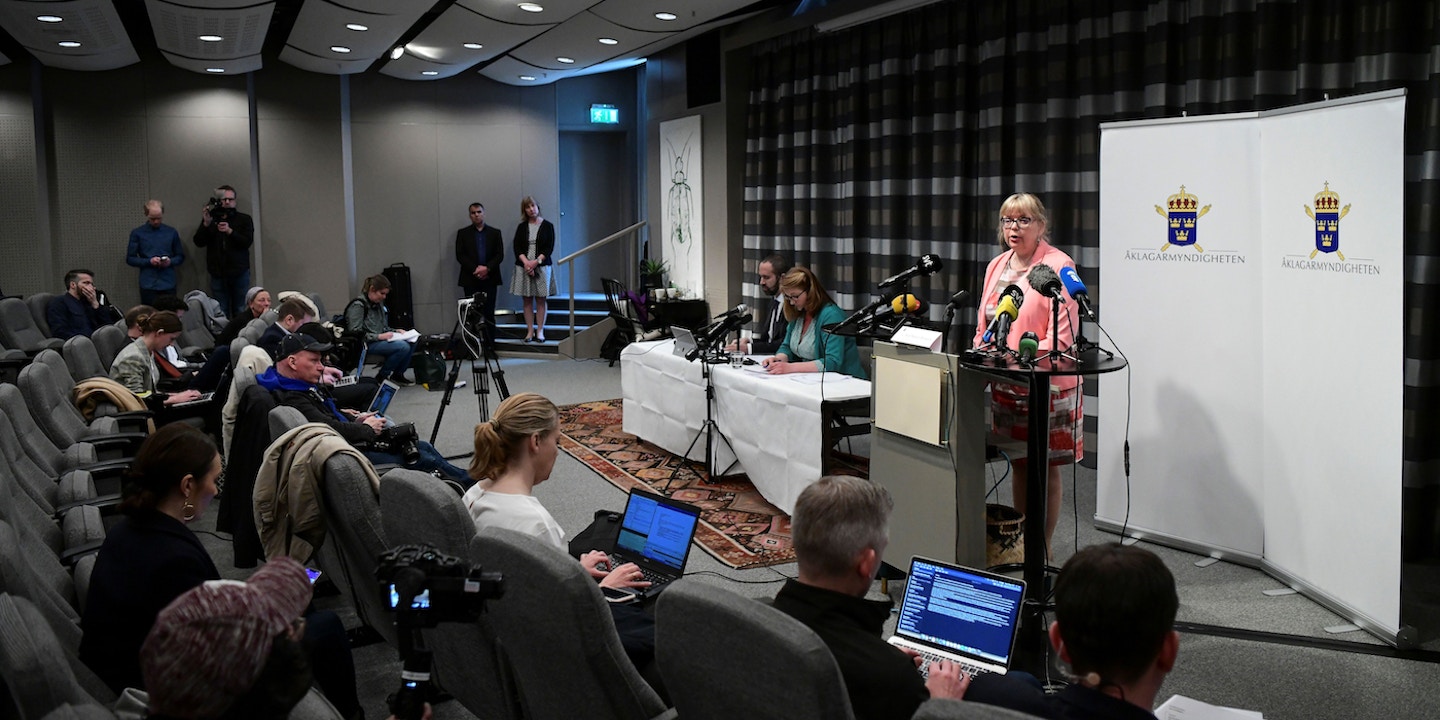 Sweden’s Prosecution Authority reopened an investigation of Julian Assange for rape on Monday and will seek his extradition from Britain, the country’s deputy director of public prosecution, Eva-Marie Persson, told reporters in Stockholm.

The Swedish request will force British authorities to decide whether to send the detained WikiLeaks founder to Sweden or the United States, or neither, at the end of his 50-week jail sentence. He is currently serving for violating bail conditions in 2012, when he took refuge in Ecuador’s London embassy after losing his final appeal against extradition to Sweden.

“On 20 August 2010, a police report was made regarding a suspected rape in Enköping, Sweden on 17 August 2010. The alleged offender was reported as being the Australian citizen, JA, born 3 July 1971,” the prosecution authority said in a written explanation of the decision. “The courts in Sweden have, on several occasions during the preliminary investigation, considered the decision to detain JA in his absence, and on each occasion found there exists probable cause for JA to be suspected of rape.”

At a news conference on Monday, Persson said, “After reviewing the preliminary investigation in its current state, my assessment is that there is still probable cause that Mr. Assange committed rape.”

Elisabeth Massi Fritz, a lawyer for Assange’s unidentified Swedish accuser, said that her client welcomed the reopening of the investigation, despite the “great deal of hate” she has faced from supporters of the WikiLeaks founder who have cast doubt on her claims.

"Nobody stands above the law, even if your name is Julian Assange."

The lawyer representing the victim allegedly raped by the Wikileaks founder, spoke to the media after Swedish prosecutors reopened the case.https://t.co/wWHqCwPTR5 pic.twitter.com/w4M1bxyId6

While the Obama administration had reportedly contemplated but decided against charging Assange with a crime related to the 2010 publication of troves of Pentagon and State Department documents provided by Chelsea Manning, the Trump administration secretly filed criminal charges against him last year related to that leak.

Those charges were filed despite the fact that WikiLeaks had secretly offered help to Donald Trump’s 2016 campaign, in a series of private Twitter messages sent to the candidate’s son Donald Trump Jr., and the candidate had repeatedly praised the group for releasing emails stolen by Russia from Hillary Clinton’s campaign chairman. In one post-election message to Trump Jr., WikiLeaks even suggested that, as a form of payback, it would be “helpful for your dad to suggest that Australia appoint Assange ambassador to DC.”

A British judge gave the U.S. a deadline of June 12 to make its case for the extradition of Assange, who has denied both the rape allegation in Sweden and conspiring with Manning to break U.S. law.

Persson, the Swedish prosecutor, said that her office will issue a European Arrest Warrant immediately, seeking to question and possibly charge Assange based on a rape complaint from a woman in 2010. The investigation had been suspended in 2017 when it appeared unlikely that Assange could be extradited due to his political asylum in Ecuador’s embassy in London.

“I am well aware of the fact that an extradition process is ongoing in the U.K. and that he could be extradited to the U.S.,” Persson said. “In the event of a conflict between a European Arrest Warrant and a request for extradition from the U.S., U.K. authorities will decide on the order of priority.”

The competing extradition requests will be evaluated by a British judge, but the ultimate decision could be made by the U.K. Home Secretary, Sajid Javid, a Conservative politician.

Last month, more than 70 British lawmakers signed a letter to Javid from Stella Creasy, a member of Parliament for the opposition Labour party, urging their government to give priority to any extradition request from Sweden, over the one filed by the U.S. “We must send a strong message of the priority the U.K. has in tackling sexual violence and the seriousness with which such allegations are viewed,” Creasy wrote. “We urge you to stand with the victims of sexual violence and seek to ensure the case against Mr. Assange can now be properly investigated.”

Tonight over 70 parliamentarians stand with victims of sexual violence, and are calling on both the Home Secretary and the shadow Home Sec to urge them both to be champions of action to ensure Julian Assange faces Swedish authorities and is extradited there if they so request: pic.twitter.com/uaJMM984Cc

One of the lawmakers who signed that letter, Jess Phillips, wrote on Monday that giving priority to the Swedish extradition request would demonstrate that the British government takes its responsibility to ensure women’s safety seriously.

I along with others will be pushing for Sweden to have priority over the US. We are always told that safety and security is the first duty of any Government. Today our government can prove that by for the first time including women's safety in that. https://t.co/uItuEVitTA

The woman’s complaint, Swedish prosecutors told England’s High Court in 2011, was that in her home, “Assange deliberately consummated sexual intercourse with her by improperly exploiting that she, due to sleep, was in a helpless state.”

Since the statute of limitations on the rape allegation in Sweden expires in August 2020, that case would almost certainly end if Assange were to be extradited to the U.S. to face trial on allegations that he tried to help Manning hack into a Pentagon computer system to obtain documents.

“If the U.S. is given priority and the Swedish request delayed, then justice will be denied,” David Allen Green, a British legal commentator argued in The New Statesman on Monday. “The Swedish allegation also does not have any freedom of expression element to it.”

It is also possible that, from a legal standpoint, Assange might be better protected from extradition to the U.S. by agreeing to go to Sweden, allowing the rape investigation to proceed.

“Sweden, like the U.K., is party to the European Convention on Human Rights, and so it would not be lawful for him to be extradited to America if there is any risk of torture or the death penalty,” Green observed.

Mark Klamberg, a professor in public international law at Stockholm University, agreed that Assange might have more legal protection against extradition to the U.S. if he goes to Sweden. Writing on Twitter, Klamberg pointed out that while there is an exception for political offenses in most bilateral extradition treaties, including the original one between the U.K. and U.S., in 2003 the U.K. “changed its extradition law removing/weakening political offence exception.” Swedish law, however, still has that exception.

For the record. I think it was reasonable, legal and desirable for Assange to be surrendered to Sweden to face rape allegations, the same does not necessarily apply when it comes to a surrender to the US since it essentially concerns (potentially) political crimes.

Persson, the Swedish prosecutor, told reporters on Monday that Assange does have some agency in the process, since he could agree to allow Swedish investigators to conduct a preliminary interview by video-link while he is serving his time in a British jail. “Such an interview, however, requires Julian Assange’s consent,” Persson said.

A statement from WikiLeaks on Monday restated the group’s claim that the Swedish case is political in nature. “Since Julian Assange was arrested on 11 April 2019, there has been considerable political pressure on Sweden to reopen their investigation, but there has always been political pressure surrounding this case,” Kristinn Hrafnsson, WikiLeaks’ editor-in-chief, said in the statement. “Assange was always willing to answer any questions from the Swedish authorities and repeatedly offered to do so, over six years. The widespread media assertion that Assange ‘evaded’ Swedish questioning is false.”

Statement regarding the reopening of a preliminary investigation in Sweden.

“This investigation has been dropped before and its reopening will give Julian a chance to clear his name,” Hrafnsson concluded.

The woman who brought the complaint still to be investigated has not been identified, but a second woman, whose separate complaint against Assange was dropped when the statute of limitations on her claim elapsed, is Anna Ardin. She told the Swedish newspaper Aftonbladet in 2010 that the complaints were “not orchestrated by the Pentagon,” as some Assange supporters had claimed, but were the result of actions by “a man who has a twisted attitude toward women and a problem taking no for an answer.”

Even if Sweden does not renew its investigation, Assange’s extradition to the U.S. is likely to be challenged by his lawyers with reference to Article 4 of the extradition treaty between the United States and the United Kingdom signed in 2003, which states that “extradition shall not be granted if the offense for which extradition is requested is a political offense.”

And extradition between the two countries is far from automatic. On at least nine occasions since the treaty was signed, the U.K. has declined extradition requests from the U.S. In 2012, then-Home Secretary Theresa May decided not to extradite Gary McKinnon, a British hacker with Asperger’s syndrome who admitted to accessing U.S. government computers but claimed he was just looking for evidence of UFOs.

Last year, another alleged hacker with Asperger’s, Lauri Love, won a High Court appeal against his extradition to the U.S. Love, who allegedly stole troves of data from the U.S. Federal Reserve, the Pentagon, NASA, and the FBI, convinced judges that there was a high risk that he would kill himself if sent to an American prison.