The WikiLeaks founder was arrested by British police who were invited into Ecuador’s London embassy on Thursday after his asylum was withdrawn. 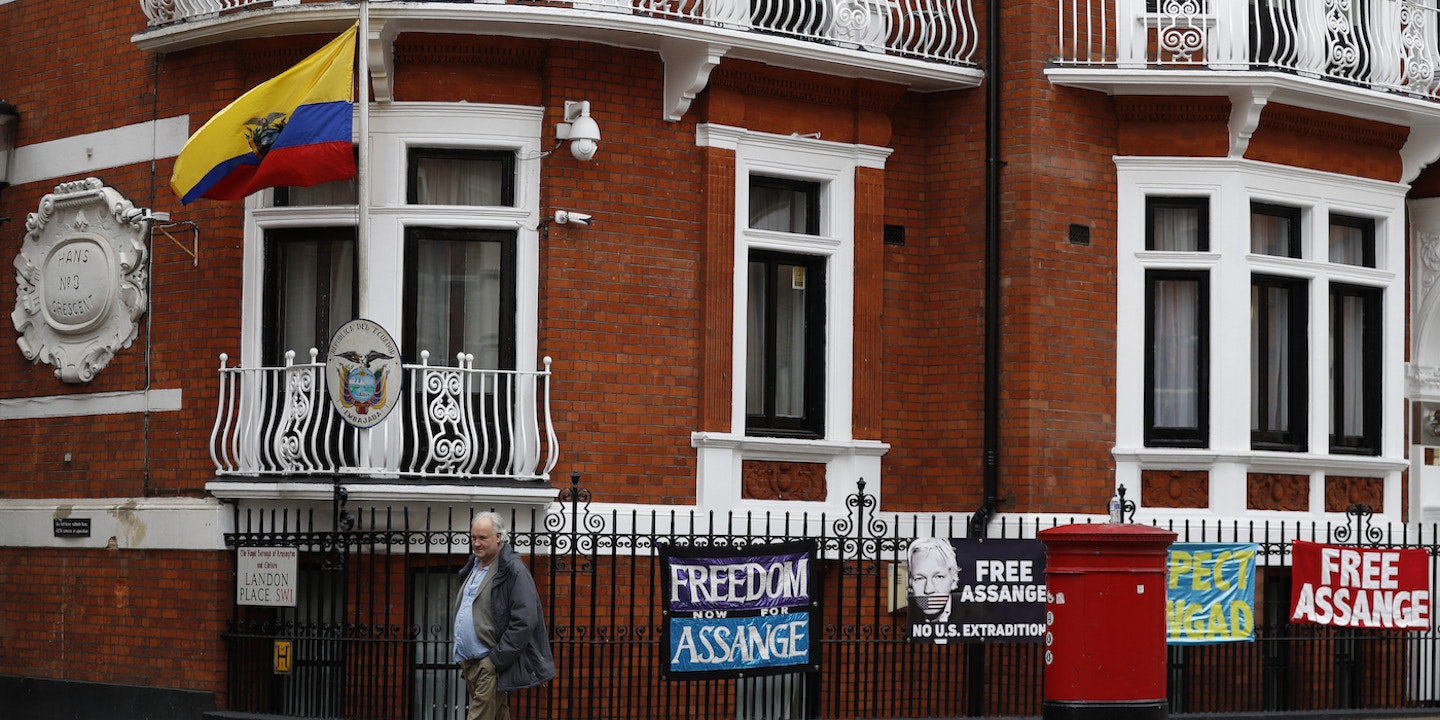 This breaking news report was last updated at 5:27 p.m. EDT.

Julian Assange, the WikiLeaks founder, was arrested on Thursday inside Ecuador’s Embassy in London, where he had lived since 2012 under diplomatic protection. London’s Metropolitan Police Service said in a statement its officers were “invited into the embassy by the Ambassador, following the Ecuadorian government’s withdrawal of asylum.”

Video of Assange being dragged from the embassy was captured on a livestream set up by Ruptly, a Russian government news agency.

Assange’s lawyer, Jen Robinson, tweeted that he had been arrested not just for breach of bail conditions in the United Kingdom, but also in relation to an American extradition request. Apparently citing Assange himself as a source, the lawyer said the warrant was for allegedly conspiring with Chelsea Manning to leak documents in 2010.

From #Assange: The US warrant was issued in December 2017 and is for conspiracy with Chelsea Manning @xychelsea in early 2010.

A subsequent police statement confirmed that Assange was “further arrested on behalf of the United States authorities, at 10:53 hrs after his arrival at a central London police station. This is an extradition warrant under Section 73 of the Extradition Act.”

Assange, 47, was then taken from a central London police station to Westminster Magistrates’ Court. The force explained that it acted initially on a warrant issued by that court after Assange took refuge in the embassy in 2012, violating bail conditions by not attending a hearing on his attempt to resist extradition to Sweden, where he was wanted for questioning on sexual misconduct allegations leveled against him by two women.

In May 2017, Swedish prosecutors announced that they were closing their investigation into the sexual assault allegations in light of Assange’s asylum and the time that had elapsed.

Daniel Sandford, a BBC journalist inside the courtroom for Assange’s appearance reported via Twitter that the WikiLeaks founder pleaded “not guilty” to violating the terms of his bail in 2012, but refused to give evidence.

The judge later found Assange guilty of failing to surrender and scheduled a court appearance for May 2 on the U.S. extradition request.

U.S. prosecutors later unsealed their indictment against Assange, saying that he was wanted “in connection with a federal charge of conspiracy to commit computer intrusion for agreeing to break a password to a classified U.S. government computer.”

“The indictment alleges that in March 2010, Assange engaged in a conspiracy with Chelsea Manning, a former intelligence analyst in the U.S. Army, to assist Manning in cracking a password stored on U.S. Department of Defense computers,” prosecutors said.

“During the conspiracy, Manning and Assange engaged in real-time discussions regarding Manning’s transmission of classified records to Assange,” the prosecutors claimed. “The discussions also reflect Assange actively encouraging Manning to provide more information. During an exchange, Manning told Assange that ‘after this upload, that’s all I really have got left.’ To which Assange replied, ‘curious eyes never run dry in my experience.'”

The indictment claims that Manning provided Assange with part of the password only after she “had already provided WikiLeaks with hundreds of thousands of classified records,” related to the wars in Afghanistan and Iraq.

A subsequent section of the indictment appears to indicate that Assange did not succeed in cracking the password.

Prosecutors for the U.S. military first revealed the attempted password-cracking in 2011, telling a court that chat logs found on Manning’s computer revealed that she had asked for Assange’s help.

Ecuador’s president, Lenín Moreno, released a video statement explaining his decision to withdraw the diplomatic asylum granted to Assange by his predecessor, accusing Assange of “discourteous and aggressive behavior,” and “hostile and threatening declarations against Ecuador and especially the transgression of international treaties.”

In a sovereign decision Ecuador withdrew the asylum status to Julian Assange after his repeated violations to international conventions and daily-life protocols. #EcuadorSoberano pic.twitter.com/pZsDsYNI0B

“He particularly violated the norm of not intervening in the internal affairs of other states,” Moreno added.

Moreno also said that British authorities had offered him a guarantee that Assange would not be extradited to a country where he could be tortured or face the death penalty. That seemed like a clear reference to the United States, where, the United States attorney’s office for the Eastern District of Virginia accidentally revealed in November that it had filed a secret indictment charging Assange with crimes related to WikiLeaks disclosures.

Chelsea Manning, the former Army intelligence analyst who was convicted of leaking military and diplomatic files to WikiLeaks before having her sentence commuted by former President Barack Obama, is currently in jail for refusing to testify about her decision in 2010.

WikiLeaks has claimed in recent weeks that Ecuador had turned against Assange because of what Moreno took to be Assange’s part in the alleged hacking of his own phone.

Last week, after private photographs of Moreno and his family were posted online, the president told the Ecuadorean Radio Broadcasters’ Association that Assange did not have the right to “hack private accounts or phones” while enjoying diplomatic asylum.

Although Moreno did not directly connect Assange to that leak, Reuters reported that his government said it believed the photos were shared by WikiLeaks.

Sweden’s Chief Prosecutor Ingrid Isgren said in a statement the arrest “is news to us too, so we have not been able to take a position on the information that is now available. We also do not know why he is under arrest.”

Assange’s arrest was condemned by many supporters, including Edward Snowden, who reminded journalists that the United Nations had “formally ruled his detention to be arbitrary, a violation of human rights.”

Important background for journalists covering the arrest of Julian #Assange by Ecuador: the United Nations formally ruled his detention to be arbitrary, a violation of human rights. They have repeatedly issued statements calling for him to walk free--including very recently. pic.twitter.com/fr12rYdWUF

My colleague Glenn Greenwald seconded the concerns expressed by The Guardian’s Ewen MacAskill, who was also part of the team that published the first Snowden disclosures, that Assange is apparently wanted in the U.S. for leaking documents that were also published by The Guardian, the New York Times, Der Spiegel, and El Pais.

This from @Guardian reporter @ewenmacaskill is critical. Note Obama DOJ looked but found no evidence that Assange worked with Manning, but even if he had, journalists often work with sources. Still a huge threat to press freedom, as @dankennedy_nu argued https://t.co/QeIbnUQwdk https://t.co/m2fDZASppa

Have often not seen eye to eye with Assange. Aspects of his behaviour over the years trouble me - eg never liked indiscriminate dumping of unredacted material. But have always said would stand by him in defence of what Guardian and @nytimes published in 2010/11

As my colleague Peter Maass argued, even many of those who dislike Assange’s subsequent intervention in U.S. politics on behalf of Donald Trump have agree that the very first item from Manning’s leak published by WikiLeaks, video showing the killing of civilians and journalists by U.S. forces in Iraq, had an undeniably important impact.

Our understanding of what's happened in Iraq has been shaped by the rare leaks of visual evidence of war crimes by U.S. forces. You can dislike Assange for justifiable reasons, but the video Chelsea Manning leaked to him, and that Wikileaks published, is stunningly important. pic.twitter.com/aabR2hI8Nj

That video, recorded from the cockpit of an Apache military helicopter in Iraq in 2007, showed American soldiers killing at least eighteen people, including two Reuters journalists. The leader of Britain’s opposition Labour party, Jeremy Corbyn, shared an except from it on Twitter to argue against Assange’s extradition.

The extradition of Julian Assange to the US for exposing evidence of atrocities in Iraq and Afghanistan should be opposed by the British government.pic.twitter.com/CxTUrOfkHt

The greatest traitor in Ecuadorian and Latin American history, Lenin Moreno, allowed the British police to enter our embassy in London to arrest Assange.
Moreno is a corrupt man, but what he has done is a crime that humanity will never forget. https://t.co/XhT51MA6c6

"Julian Assange is no hero. He has hidden from the truth for years and years"

“This will now be decided properly, independently by the British legal system, respected throughout the world for its independence and integrity,” Hunt added.

In a statement to the media after the hearing, Kristinn Hrafnsson, the current editor of WikiLeaks said, of the U.S. prosecutors charge that Assange was guilty of conspiracy: “it’s a conspiracy to commit journalism.”

His lawyer, Jen Robinson, said that she and Assange had been correct to warn that the U.S. would try to prosecute him for publishing the Manning leaks in 2010.

"This sets a dangerous precedent... any journalist can be extradited for prosecution in the US for having published truthful information about the US"

Robinson told the media outside the court she had a message from Assange: “I told you so.”

The bizarre twist of Assange being indicted by the Trump Administration’s Justice Department, after Donald Trump spent the last weeks of the 2016 campaign telling crowds “I love WikiLeaks,” and his son was in secret communication with the organization, was not lost on reporters in Washington.

Trump declared his love for WikiLeaks many times on the campaign trail...and the admiration was apparently mutual. https://t.co/UMjghHQKaW #inners pic.twitter.com/sYvBDs6Rcn

Asked on Thursday by Karen Travers of ABC News, “Do you still love WikiLeaks?” Trump cast himself as a detached bystander, saying, “I know nothing about Wikileaks, it’s not my thing.”

"I know nothing about Wikileaks, it's not my thing," President Trump tells ABC News' @karentravers when asked if he still loves Wikileaks amid Julian Assange's arrest.

"I know nothing really about him, it's not my deal in life," Trump says of Assange https://t.co/tO2gt5IH8r pic.twitter.com/uufzAtUWEv

“I know nothing really about him, it’s not my deal in life,” Trump added. “I don’t really have any opinion.”