Four of the seven senators who’ve joined the 2020 race have signed onto a bill that would prohibit the U.S. military from spending money to attack Iran. 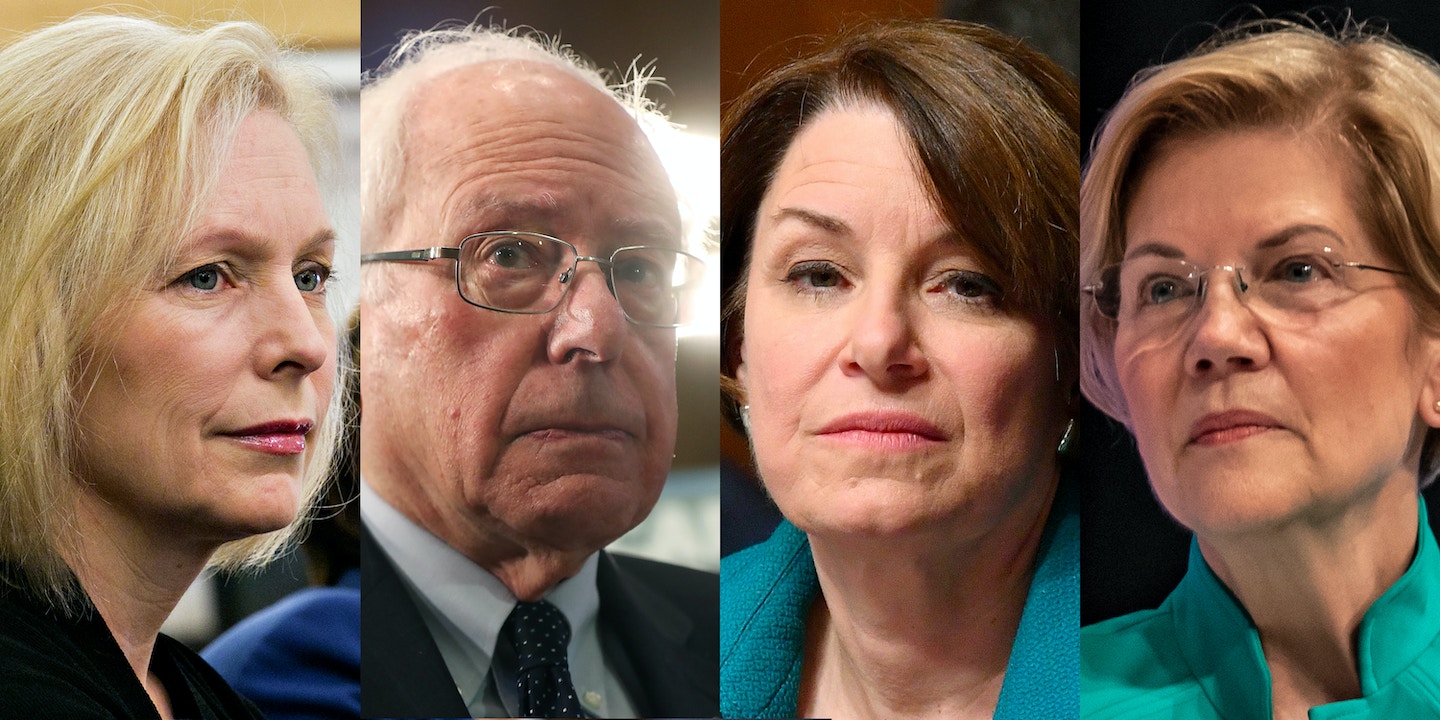 In a sign of growing Democratic concern that U.S.-Iran tensions could escalate to all-out war, four of the seven senators running for the 2020 Democratic presidential nomination have signed onto a bill that would prohibit the U.S. military from spending money to attack Iran.

Three of the Democratic senators — Elizabeth Warren of Massachusetts, Amy Klobuchar of Minnesota, and Kirsten Gillibrand of New York — became co-sponsors of the bill within the last week. Sen. Bernie Sanders, I-Vt., was one of its original co-sponsors.

“We’re very encouraged with the growing momentum and support for the legislation and hope to have more senators sign on,” said Ned Adriance, communications director for Sen. Tom Udall, D.-N.M., who introduced the bill on April 4. “We reached out at the staff level to the Democratic caucus upon introduction, and continue to follow up given the alarming events of the past weeks.”

The remaining three senatorial candidates for president, Cory Booker, D-N.J., Michael Bennet, D-Colo., and Kamala Harris, D-Calif., are not currently co-sponsors. Booker’s office said he is reviewing the bill but has not made a decision. Bennet told The Intercept that he has not yet read the bill. Harris’s campaign did not respond to questions.

The recent escalation in the Trump administration’s feud with Iran has placed the bill, along with a companion version in the House, at the center of an unfolding debate about how Congress can best reduce the risk of war. Connecticut Democratic Sen. Chris Murphy, one of the bill’s original co-sponsors, said he believes that it is the best available avenue, even though Majority Leader Mitch McConnell, R-Ky., will not bring it to the floor.

When the Senate version of the bill was introduced, Udall’s office stated that it “restores to Congress the sole power to declare war … thereby blocking the president from provoking an unnecessary military conflict.” Udall himself added that “the calls for war with Iran are ripped straight out of the same playbook that launched us into the failed invasion of Iraq.”

However, a majority of the Democratic caucus in the Senate has not signed onto the bill, including New York’s Chuck Schumer, the top Senate Democrat. New Jersey Sen. Robert Menendez, the ranking member of the Foreign Relations Committee, recently stated on the Senate floor, “We cannot, and we will not, be led into dangerous military adventurism,” but has not co-sponsored the bill. He told The Intercept that he hadn’t looked at it. Sen. Jack Reed of Rhode Island and New Hampshire Sen. Jeanne Shaheen, the highest-ranking Democrats on the Armed Services Committee, are also not co-sponsors.

Some of the same dynamics have held in the House, where a version of the bill was introduced on April 25 by Rep. Anna Eshoo, D-Calif., with only one original co-sponsor. It garnered just four more co-sponsors before May 5. Twenty-four have signed on since, for a total of 30 representatives.

None of the four House members running for the Democratic nomination — Hawaii’s Tulsi Gabbard, Massachusetts’s Seth Moulton, Ohio’s Tim Ryan, or California’s Eric Swalwell — have signed onto the bill.

The Senate version of the bill had 11 original cosponsors, including Murphy and Sanders, as well as Democratic whip Richard J. Durbin of Illinois and Kentucky Republican Rand Paul. No other senators signed on before May 5, when President Donald Trump’s hawkish national security adviser John Bolton announced that the U.S. was dispatching the USS Abraham Lincoln Carrier Strike Group to the Middle East “to send a clear and unmistakable message to the Iranian regime that any attack on United States interests or on those of our allies will be met with unrelenting force.” The Iranian government accused Bolton and the U.S.’s middle eastern allies of seeking “regime change at the very least” and the “disintegration of Iran.”

Since May 5, eight other senators have co-sponsored the bill, including Warren, Klobuchar, and Gillibrand, giving it 20 senatorial endorsements.

The two companion bills are not the first time that Democrats have attempted to push Congress to prevent military action against Iran.

Last year the House of Representatives passed an amendment to the National Defense Authorization Act by unanimous voice vote stating that “the use of the Armed Forces against Iran is not authorized by this Act or any other Act.” The amendment was stripped out during the process of reconciling the House and Senate versions of the bill, but the conference committee put out a nonbinding statement that Congress is “not aware of any information that would justify the use of military force against Iran under any other statutory authority.”

Democrats on the Senate Armed Services Committee are also working to address escalating tensions with Iran via possible amendments to this year’s National Defense Authorization Act, which is scheduled to be marked up in a closed session on Wednesday.

“I think there will be an effort … to address concerns about taking precipitous action in Iran, which I’m supportive of,” Shaheen told The Intercept.

The committee is preparing for a closed markup next week, but “once the markup finishes, all that will be made public,” Reed told The Intercept. Asked what else Democrats can do from the Hill to de-escalate the situation, he said, “I think we can speak out, ask for the kind of briefings and detailed information we need. And also urge the committee into a hearing.”

The details of any amendments are still undetermined and will likely be finalized after a classified meeting on Tuesday, when Acting Defense Secretary Patrick Shanahan is expected to brief senators on recent intelligence about Iran, according to Mississippi Republican Sen. Roger Wicker, the second-ranking Republican on the Armed Services Committee. A Democratic staff member confirmed the committee’s plans.

Sen. Richard Blumenthal, D-Conn., also on Armed Services, said Democrats were talking among themselves about “revisions to the AUMF.” The 2001 Authorization for Use of Military Force gave the George W. Bush administration authority to go to war against the perpetrators of the 9/11 attacks, but has since been used by the Bush, Obama, and Trump administrations as justification for U.S. actions with little or no connection to those attacks. Blumenthal said Democrats were discussing “what kind of discipline we can enforce, what kind of revisions to the AUMF [we could make], or a new AUMF, basically to enforce some accountability.”

Sen. Martin Heinrich, D-N.M., a co-sponsor of the Udall bill, said “one of the most important things we can be doing right now is talking to our Republican colleagues about getting these issues in front of the president. I gotta think that there’s got to be some space between John Bolton and the president on some of this escalatory behavior.”