Four Simple Steps the U.S. Media Could Take to Prevent a Trump War With Iran

Do U.S. reporters, anchors, and editors really want more Middle Eastern blood on their hands? They’re certainly acting like it. 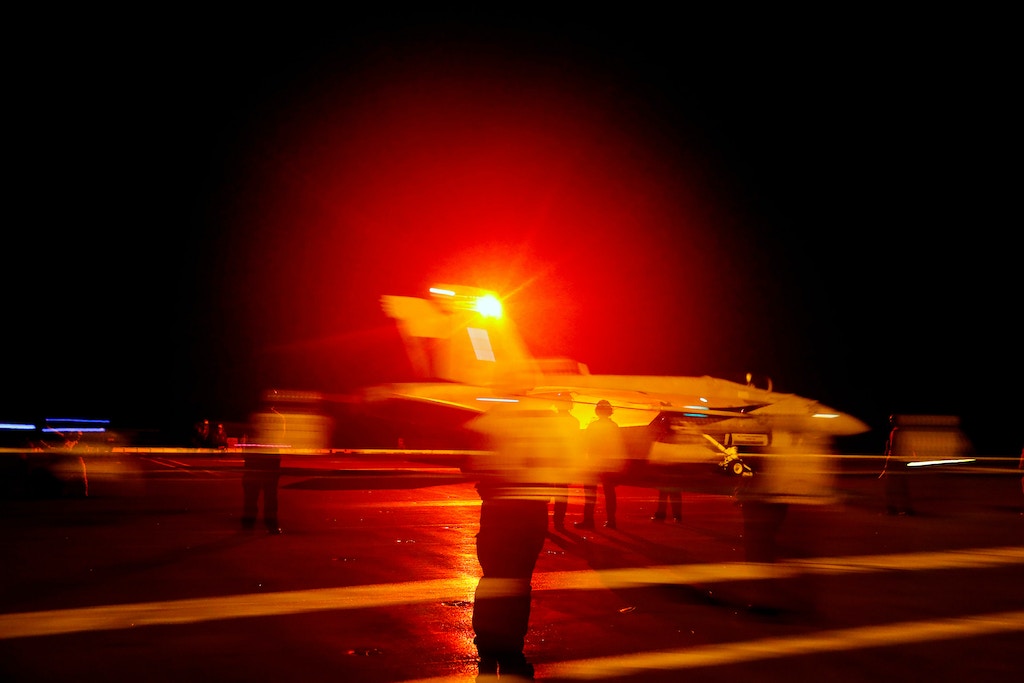 An F/A-18E Super Hornet launches from the flight deck of the USS Abraham Lincoln on May 10, 2019, in the Red Sea. The Abraham Lincoln Carrier Strike Group has been deployed to U.S. Central Command as tensions with Iran have recently escalated.

The 64,000-rial question, therefore, is whether or not journalists have learned any lessons whatsoever from the Iraqi WMD debacle of 2003.

The evidence for these hawkish headlines? For this stream of alarmist media reports about “threats” and “attacks” from Iran? Yes, you guessed it: statements provided to reporters by U.S. officials hiding behind a cloak of anonymity. In some cases, just one official. Take the Wall Street Journal’s scoop:

An initial U.S. assessment indicated Iran likely was behind the attack on two Saudi Arabian oil tankers and two other vessels damaged over the weekend near the Strait of Hormuz, a U.S. official said, a finding that, if confirmed, would further inflame military tensions in the Persian Gulf.

Why would you trust the word of a single official on such a sensitive and contentious issue? And why, oh why, would you rely on the testimony of a member of the Trump administration, known globally, of course, for its stringent and unbending adherence to the truth?

Listen to the Deconstructed podcast, where Mehdi Hasan discusses the prospects for another illegal and bloody regime change war in the Middle East.

Also: If you’re going to trust a single anonymous official, in this administration of fanatical hawks and shameless dissemblers, why not trust this particular official who was quoted in the New York Times?

One American official, speaking on the condition of anonymity to discuss confidential internal planning, said the new intelligence of an increased Iranian threat was “small stuff” and did not merit the military planning being driven by Mr. Bolton. The official also said the ultimate goal of the yearlong economic sanctions campaign by the Trump administration was to draw Iran into an armed conflict with the United States.

Plenty of journalists say they want to learn the lessons of Iraq. But the sad reality is that many of my colleagues in the media are, wittingly or unwittingly, becoming complicit in this administration’s cynical and dangerous attempt “to draw Iran into an armed conflict with the United States.”

So what to do? Here are four suggestions.

Simply passing along the claims of U.S. officials to readers or viewers, without checking whether they are true or not, is not even close to the definition of journalism. Reporters are not supposed to be stenographers to the people in power; they’re supposed to hold power to account.

Showing blind faith in U.S. officials on national security issues, in particular, makes no sense whatsoever. The United States has a long history of starting, or escalating, conflicts on the basis of fraudulent threats and provocations. Remember Vietnam and the Gulf of Tonkin lies? Remember the first Gulf War and the false congressional testimony about Kuwaiti babies being thrown out of incubators by Iraqi troops? Remember how George W. Bush not only fabricated a threat from non-existent WMDs but also plotted to provoke Saddam Hussein into shooting down a U.S. plane “painted in U.N. colors”?

Then there is Iran. Last week, in a radio interview, Chuck Hagel, the former Republican senator and defense secretary under Barack Obama, accused the Trump administration of “baiting Iran in a very dangerous way.”

We all know, of course, that John Bolton wants to bomb Iran. He has said so himself, on the op-ed pages of the New York Times.

So why aren’t reporters more skeptical of the administration’s claims on Iran? Why are they so keen to slavishly and uncritically repeat them to the public, as if they came down on stone tablets from on high?

Just In: US officials tell me the threats from Iran included “specific and credible” intelligence that Iranian forces and proxies were targeting US forces in Syria, Iraq and at sea. There were multiple threads of intelligence about multiple locations, the officials said. #Iran

This week, however, the most senior British general in the U.S.-led coalition against ISIS told reporters that “there’s been no increased threat from Iranian-backed forces in Iraq and Syria.”

“Fool me once,” as President George W. Bush so famously was unable to say, “shame on you. Fool me twice, shame on me.”

2. Get Your Facts Straight

These three statements represent the consensus view of, among others, the U.S. intelligence community, Israeli security chiefs, top U.S. generals, and, perhaps most importantly, the International Atomic Energy Agency (IAEA). If, as a journalist, you report differently, then you have a blockbuster scoop. But there’d better be something behind it beyond the musings of anonymous White House officials.

Yet the New York Times reported earlier this week that the Pentagon’s plan to send 120,000 U.S. troops to the Middle East partly depends on whether Iran decides to “accelerate work on nuclear weapons.”

How can the Iranians “accelerate work” on weapons that do not exist?

We are constantly shown images on our TV screens of Iranians burning U.S. flags or chanting “Death to America.” But wouldn’t it be useful if journalists also provided much-needed context to this long-running conflict between the United States and Islamic Republic? Could they try to explain to their readers or viewers how there are legitimate and long-standing grievances on both sides?

After all, how many Americans are aware of the fact that the Eisenhower administration toppled the democratically elected government of Iranian Prime Minister Mohammad Mossadegh in a CIA coup in 1953? Or that the Carter administration offered safe haven to the repressive dictator, the Shah of Iran, after he fled from the Iranian Revolution in 1979? Or that the Reagan administration helped Saddam Hussein’s Iraq use poison gas against Iranian forces in the Iran-Iraq war? Or that George H.W. Bush’s administration refused to apologize to Iran after a U.S. navy warship shot down an Iranian civilian airliner, killing all 290 passengers onboard?

It isn’t that hard for journalists to provide historical context in their reporting. Here’s Bernie Sanders laying it out briefly and bluntly, in February 2016, during a Democratic presidential debate with Hillary Clinton:

Nobody knows who Mossadegh was, democratically elected prime minister of Iran. He was overthrown by British and American interests because he threatened oil interests of the British. And as a result of that, the Shah of Iran came in, terrible dictator. The result of that, you had the Iranian Revolution coming in, and that is where we are today.

Why only quote, or rely on, administration officials? Or men and women in uniform? Or folks from hawkish D.C. think tanks?

Why can’t we hear from skeptical and anti-war voices, too? From Iranian Americans perhaps?

A month before the Iraq invasion, in February 2003, Fairness & Accuracy in Reporting, or FAIR, produced a study of 393 on-camera sources who had appeared in stories about Iraq on network news. According to FAIR, a whopping three out of four (76 percent) sources were current or former government and military officials, compared to a minuscule 6 percent of sources who were skeptics about the need for a conflict with Iraq. Meanwhile, less than 1 percent — or three out 393 sources! — were “identified with organized protests or anti-war groups.”

I have a suggestion for reporters and anchors looking for guests and sources on the current crisis: If they got Iraq wrong, don’t ask them about Iran.

With a know-nothing yet belligerent president in the Oval Office, a national security adviser who has dreamt of war for decades, and the Saudis baying for blood, the importance of fair and accurate reporting on Iran, and the threat that it may or may not pose, cannot be overstated. Think about this: Hundreds of thousands of Iraqi civilians, as well as more than 4,400 American troops, might be alive today had U.S. media organizations — with a few honorable exceptions — done their job in 2003.

In fact, a year after the invasion, in May 2004, the editors of the New York Times issued a stark mea culpa, under the headline “The Times and Iraq.” “Controversial” information about Iraq and weapons of mass destruction, they admitted, was “insufficiently qualified or allowed to stand unchallenged. Looking back, we wish we had been more aggressive in re-examining the claims as new evidence emerged — or failed to emerge.”

“Editors at several levels who should have been challenging reporters and pressing for more skepticism,” they continued, “were perhaps too intent on rushing scoops into the paper. … Articles based on dire claims about Iraq tended to get prominent display, while follow-up articles that called the original ones into question were sometimes buried. In some cases, there was no follow-up at all.”

Is the New York Times planning on issuing another mea culpa entitled “The Times and Iran” a year or two from now? Do U.S. reporters, anchors, and editors really want more Middle Eastern blood on their hands? If not, they need to fix their rather credulous and increasingly hawkish coverage of Iran and the Trump administration — and fix it fast.