The timely reintroduction of this bill addresses the growing number of state restrictions on abortion access. 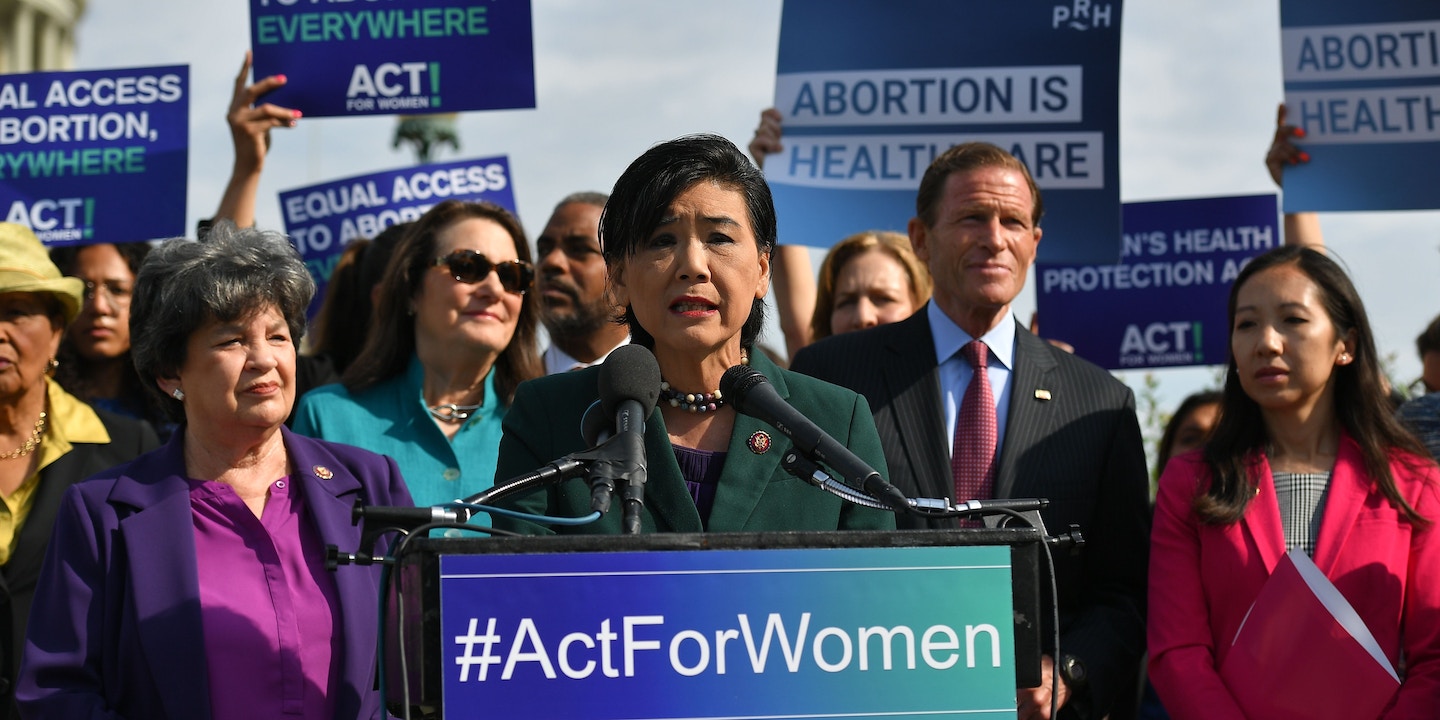 Standing outside the U.S. Capitol on Wednesday morning, congressional lawmakers announced the introduction of the Women’s Health Protection Act, which pushes back against the flood of abortion restrictions and outright bans on access that have been moving at a record pace through state legislatures.

The bill “enshrines” in federal law “a woman’s right to receive abortion services and a provider’s right to perform abortion,” said Rep. Judy Chu, a lead sponsor of the bill. “Our bill finally puts a stop to the state-based attacks that anti-abortion advocates have been trying to use to undermine or even reverse Roe.”

The bill, which has been introduced before, would block states from placing any medically unnecessary restrictions on abortion care — from medically-inaccurate informed consent requirements to gestational bans. “It prohibits any non-medical restrictions on our bodies — that means no heartbeat bills, no requirements that clinic doors be a certain width, no waiting periods or unnecessary ultrasounds. It means no abortion bans,” Chu said. And it affirms “our rights to our bodies, our rights to make our own medical decisions, and our rights to choose what is best for us and our families.”

Reintroduction of the bill, which already has 169 sponsors in the House, comes at a critical moment as state lawmakers have shifted their strategy around abortion. They’re seemingly abandoning the longtime tactic of chipping away at the right to end a pregnancy — by enacting needless restrictions that make access difficult, if not impossible — and instead pushing for an all-out ban on access.

According to a new report from the Guttmacher Institute, 378 abortion restrictions have been filed so far across the country in 2019. The number itself isn’t exactly shocking — to date, more than 1,200 abortion restrictions have been passed, one-third of those in the last eight years alone. What stands out this year is that 40 percent of these restrictions would essentially ban the procedure altogether. “Twenty-nineteen has become the year when antiabortion politicians make clear that their ultimate agenda is banning abortion outright, at any stage of pregnancy and for any reason,” Elizabeth Nash, Guttmacher’s senior state issues manager, said in a statement.

While the right to abortion expressed in the Supreme Court’s landmark Roe v. Wade decision — and reaffirmed repeatedly over the last 40-plus years — guarantees access up to the point of viability, generally considered to begin around 23 weeks into gestation, the current crop of state bills arbitrarily ban the procedure far before that: from the Alabama ban that would, practically speaking, prohibit the procedure beginning at conception to six-week bans passed in states like Georgia, to Missouri’s recent addition, which bans the procedure at eight weeks.

So far a total of 17 such bans have been passed in 10 states and, regardless of the various points at which they constrict access to care, they share a common goal: Press the issue through the courts in an effort to offer the new conservative Supreme Court majority the opportunity to strike down Roe.

The bill stands a good chance of getting out of the House — which has a solid pro-choice majority, Rep. Diana DeGette, co-chair of the congressional Pro-Choice Caucus, noted during the press conference — and it shores up women’s health care rights as a major battle zone for the 2020 election. Indeed, according to a recent poll, 62 percent of Americans called health care the first or second most important issue in the coming election; in a 2018 poll, 71 percent affirmed support for Roe v. Wade — including 52 percent of Republicans. “Trump has made abortion and, more broadly, women’s health care and women’s rights … an issue in 2020,” Planned Parenthood President Leana Wen told HuffPost. “He’s the one who has made this a campaign issue. And we say: Bring it on.”

Standing outside the Capitol on Wednesday morning with Chu, a host of other lawmakers, and advocates from the Center for Reproductive Rights and Planned Parenthood, Sen. Richard Blumenthal, the measure’s lead Senate sponsor, noted that he had worked across the street, at the Supreme Court, in 1974, the year after the court penned its decision in Roe v. Wade. As a clerk for then-Justice Harry Blackmun, who authored the court’s majority opinion in the case, “we thought then that this issue was settled,” he said. “That women’s reproductive rights as a guarantee were enshrined in our law. And the fact is, this battle is continuing, and the danger is even more dire today than it was then. We need to sound the alarm — in fact, we face a five-alarm fire in the danger to women’s reproductive rights, and we need to command the urgency and immediacy that all our lives are at risk.”