With two weeks left in the legislative session, Gov. Ned Lamont has yet to express support for the bill, which is the first of its kind in the country. 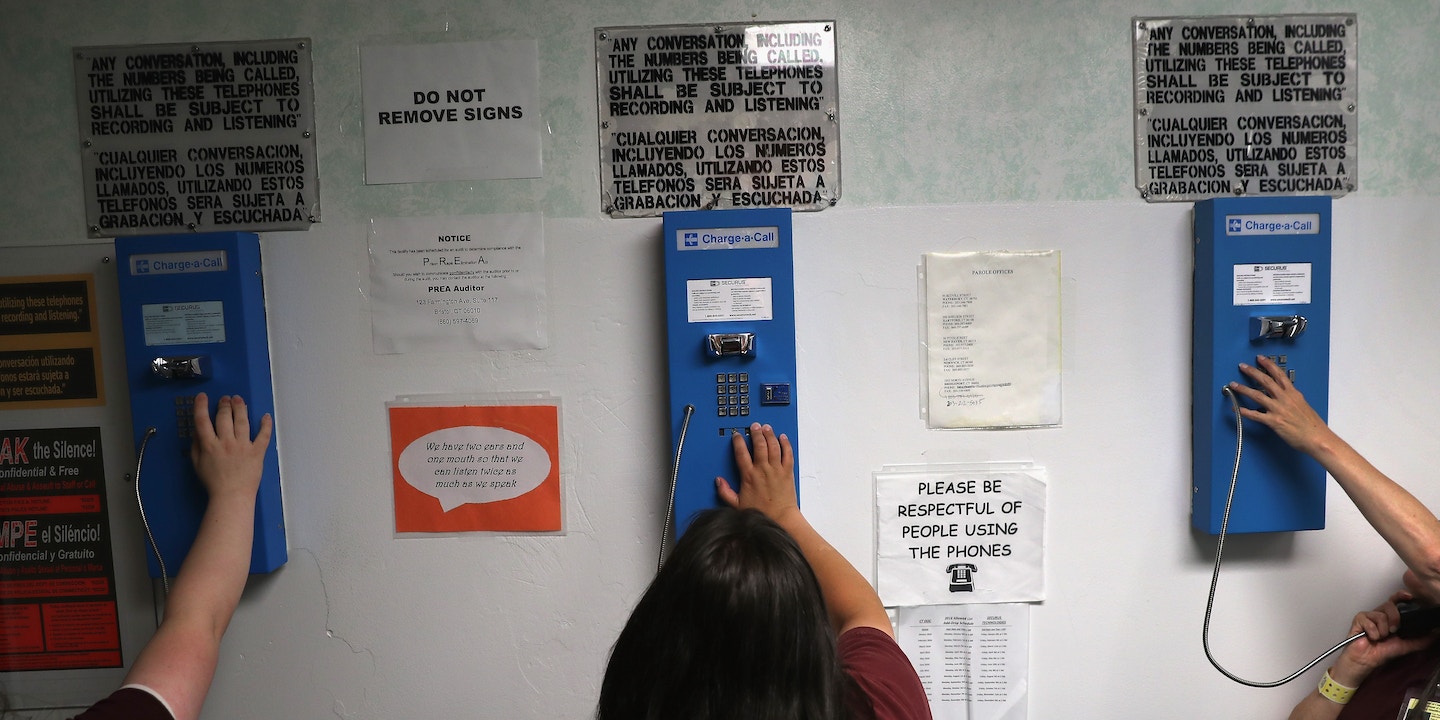 Connecticut Gov. Ned Lamont, a Democrat who grew his personal fortune through the telecommunications industry, is stonewalling a bill that would establish Connecticut as the first state in the nation to make phone calls from prison free for incarcerated people and their families.

Securus Technologies, the national prison telecommunications corporation that Connecticut has contracted with since 2012, has been quietly lobbying against the legislation for weeks, though it reversed course on Wednesday. Under pressure from Platinum Equity LLC — the private equity firm that owns the company — Securus announced in a letter that it was formally withdrawing its opposition to the bill.

“Thanks to their seven weeks of lobbying, we now have just two weeks to undo all the damage.”

But Securus’s reversal leaves the bill’s supporters with little time: With just two weeks left in the legislative session, they see Friday as the last day to advance the bill out of the House if it is to stand a shot of passing the Senate before the summer recess. Lamont, meanwhile, has yet to express support for the bill — which would require his signature — with his office citing vague objections over potential cost. Without his blessing, the bill’s backers say, it stands little shot of moving forward.

The legislation, which would protect in-person visiting rights, make phone calls and video conferencing free, and bar the state from taking any commission from those calls, advanced out the Connecticut House Judiciary Committee in early April. Around the same time, Securus hired two lobbyists on a $40,000 retainer to lobby Lamont’s office and the state Department of Correction between April 1 and September 30, according to a state ethics disclosure. The first hearing for the bill was on March 25.

Platinum Equity, which acquired Securus in 2017, has been under pressure for months from activists who say that it should end its relationship with Securus and other companies that profit from incarceration and detention. In February, Randi Weingarten, president of the nation’s second-largest teachers union, urged pension leaders to avoid private equity firms that benefit from mass incarceration.

In March, Platinum Equity told some of its investors that it would review the business practices of Securus and work to reform the company.

Bianca Tylek, the executive director of Worth Rises, a national nonprofit focused on ending the influence of commercial interests in the criminal justice system, drafted the Connecticut bill. She reached out to the private equity firm after learning of Securus’s lobbying last week to voice her concern. “I wanted to see if they would actually act in accordance with their claims that they are trying to get this company to act better,” she told The Intercept.

On Wednesday, Robert E. Pickens, the CEO of Securus, sent a letter to state Rep. Josh Elliott, the bill’s sponsor, saying that while they “previously opposed HB 6714, out of concern that it did not clearly indicate who would cover the cost of services once charges to consumers were waived,” they are now standing down “in the interest of good faith discussions with state officials regarding these issues.”

Securus also pledged to work with the state to ensure a “seamless and orderly transition” if the legislation were to pass, and acknowledged that its experience in New York City should allay concerns about a similar transition in Connecticut. (New York City, which also contracts with Securus, recently became the first city to make prison calls free, meaning that the city will assume the costs of paying for the phone services and will cede the $5 million it had annually collected in commission fees.) In its letter, Securus also said it was committed to working with Connecticut to “provide the most affordable services possible” and “downwardly adjusting call rates” in the event that the state eliminates its commission structure.

According to a 2019 report by the Prison Policy Initiative, Connecticut charges more for in-prison phone calls than any other state in the nation except for Arkansas. Advocates say the high rates are a function of state policymakers poorly negotiating telecommunications contract with Securus.

As a result of the proposed legislation, Securus and Connecticut officials recently met to discuss alternative ways to lower the costs of prison phone calls. The state’s current contract with Securus will continue through 2021, but the company said it would be willing to review and lower its rates before then. A 15-minute call from a Connecticut prison costs $3.65, nearly five times more than calls from prisons in neighboring states.

Mark Barnhill, a partner at Platinum Equity, told The Intercept that his firm asked Securus management to reach out to Elliot, the bill’s sponsor, and “clarify” that it is neither opposed to his bill nor concerned that it would cause any disruption in service. “We think it’s important for Securus to be neutral in the legislative discussion over who should pay for inmate telecommunications,” he said. “The company is able to fully support provision of services in either a customer-paid or state-paid model.”

Barnhill said Platinum Equity intervened because “we feel it’s important to help management transform the company and operate it as a responsible market leader.” He said they had not received pressure or questions from individual investors on this matter, though “in general, our investors are aware of the Securus investors and are relying on us to manage it properly.”

Tylek of Worth Rises told The Intercept that while she is glad that Securus pulled out its lobbyists and made its position on the bill neutral, she said, “They in no way deserve applause for this.” She added, “Thanks to their seven weeks of lobbying, we now have just two weeks to undo all the damage.”

Joanna Acocella, the vice president of corporate affairs for Securus, told The Intercept that “it is not accurate” to say that Securus has been lobbying against the bill for seven weeks, even while acknowledging that the company had been opposed to it. “Securus has been engaging in conversations with state officials about the impact of the legislation,” she said. “We have worked with a local firm to facilitate those conversations, requiring them to file lobbying registration under state law. Once we determined that calls could still be administered safely and effectively under the proposed legislation, we withdrew any previous opposition to the bill.”

Despite getting Securus to drop its formal opposition, Lamont has not yet endorsed the bill, with deputies citing vague objections over potential costs.

“With two weeks remaining until the end of the legislative session, offsetting the $13 million cost is an incredible challenge,” Maribel La Luz, a spokesperson for the governor, told The Intercept.

La Luz pointed to the state’s recent meeting with Securus in which they discussed renegotiating its contract. “With the combination of ongoing contract negotiations with the prison telephone services vendor, a rollout of tablets for people in prison over the next year, and longer-term budget planning [in] our legislature we’re working to reduce the cost of communication between people in prison and their families,” she said in an email.

Connecticut relies on revenue extracted from incarcerated people and their families.

State data shows that Connecticut residents currently pay about $15 million every year for prison phone calls, with $7.7 million given back to the state through commission fees. Some state officials have expressed concerns about losing those kickbacks, warning that they may have to cut vital positions and services — revealing how Connecticut relies on revenue extracted from incarcerated people and their families.

To ameliorate concerns over costs, Elliott refiled the legislation this week so that the two components of the bill that would have a fiscal impact would not take effect until October 1, 2021. “Yes, there’s a cost to the bill, but the cost is deferred,” said Tylek. “Pass the bill, and then you have two years to figure out how to pay for it.”

The estimated $13 million in cost, she added, represents just 1 percent of the $1.2 billion annual budget for the three impacted state agencies: the Department of Correction, the Department of Administrative Services, and the Judicial Department. Tylek predicts the total cost could be closer to $11.7 million if Connecticut adopts a similar pay structure to New York City.

A representative from the Connecticut Office of Fiscal Analysis confirmed that the amended bill would have “no cost or revenue loss” for the biennium period, according to an email sent on Monday to Elliott and reviewed by The Intercept.

A spokesperson for the Department of Correction, which is under Lamont’s control, told The Intercept that while the department is supportive of efforts to increase communication between incarcerated people and their loved ones, “these measures, however, do have budgetary implications which must be considered.”

State Rep. Steve Stafstrom, chair of the House Judiciary Committee, told The Intercept, “We are working with the proponents of the bill and the Department of Correction to refine the language in order to move the bill forward.”

Elliott said he worries that Securus’s lobbying, which he also didn’t learn of until last week, has already caused insurmountable damage.

“I kept hearing concerns from the DOC about what some of these costs would be and threats that Securus would pull its service if the legislation were to pass and the arguments just seemed totally bogus,” he told The Intercept. “I didn’t understand how the DOC could make those claims and now it makes sense. Securus was just poisoning the well and trying to get the governor’s staff to essentially kill the bill.”

Elliott said he will continue to fight for the legislation this session and reintroduce it again next year if he has to.

“It doesn’t take much to kill an idea — all you have to do is put a little seed of fear in people’s minds,” he said. “Then if there is any concern over a bill, that usually dwarfs all the tangible benefits, and that’s really unfortunate.”