A new Housing and Urban Development rule would roll back Obama-era protections for transgender people. 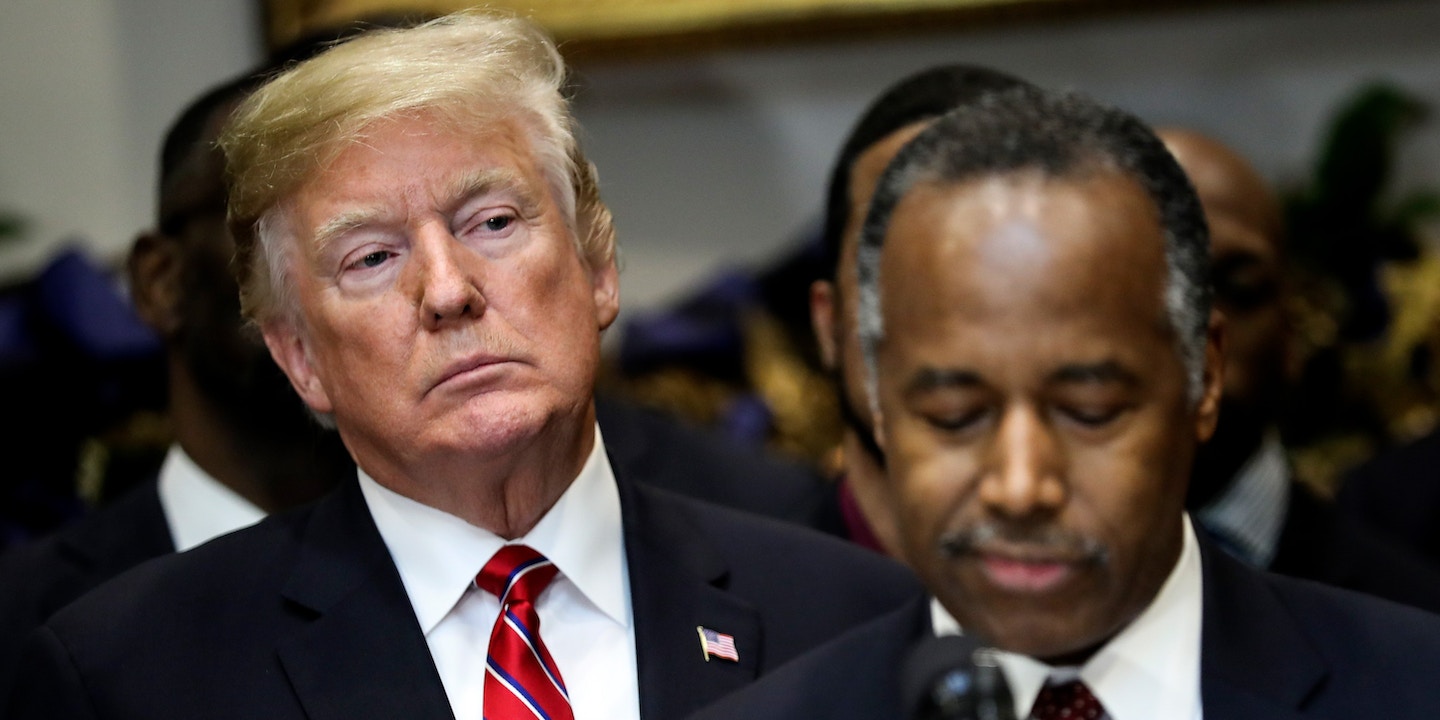 The Trump administration on Wednesday announced a new rule that would permit homeless shelters receiving Housing and Urban Development funds to turn people seeking shelter away based on their gender identity.

The plan, which is currently under review by the Office of Management and Budget and could result in a formal change as early as September, would modify the Department of Housing and Urban Development’s 2016 Equal Access Rule. That rule, issued by the Obama administration, required single-sex or sex-segregated shelters to admit people based on their gender self-identification.

Civil rights advocates have slammed the Trump administration for the proposal, which could have particularly dire consequences for transgender people. Thirty percent of transgender people have at some point experienced homelessness, and transgender people of color are more than three times as likely as the total U.S. population to be living in poverty, according to the 2015 U.S. Transgender Survey.

Shelters could consider factors such “privacy, safety, practical concerns, religious beliefs, any relevant considerations under civil rights and nondiscrimination authorities, the individual’s sex as reflected in official government documents, as well as the gender which a person identifies with” in deciding whether a person should be admitted to a shelter, an abstract published about the rule reads.

The plan’s references to “privacy” and “safety” are transphobic dog whistles, said Sharita Gruberg, policy director for the LGBT Research and Communications Project at the Center for American Progress. “This myth that trans women are a threat to the health and safety of other people in shelters … that’s just not true.”

“It is clear that HUD intends to give taxpayer-funded shelters license to turn away trans people experiencing homelessness based on the religious beliefs of the provider.”

The proposal would also allow shelter providers to consider their own religious beliefs when deciding whether to admit a person experiencing homelessness. In explaining the change, HUD blasted the 2016 Equal Access rule for offering “no flexibility for faith-based shelter providers with deeply held religious convictions.”

This is just the latest in a litany of policy changes to impact transgender people under President Donald Trump. In August, the Department of Labor published a directive allowing federal contractors to fire or refuse to hire employees based on their gender identity or sexual orientation. In January, the Department of Health and Human Services gave South Carolina’s foster care program permission to turn away prospective parents with different religious beliefs, which could also affect LGBTQ parents. In March, the Pentagon announced the beginning of its plan to bar transgender people from serving in the military.

“This is a heartless attack on some of the most vulnerable people in our society,” said Mara Keisling, executive director of the National Center for Transgender Equality, in a statement. “The programs impacted by this rule are lifesaving for transgender people, particularly youth rejected by their families, and a lack of stable housing fuels the violence and abuse that takes the lives of many transgender people of color across the country.”

A HUD spokesperson said that the federal government shouldn’t dictate a shelter’s admission decisions. “The previous Administration issued a rule in 2016 mandating that single-sex or sex-segregated shelters admit individuals based solely on a person’s self-identification of sex. Under this 2016 rule, women’s shelters are required to admit biological males who self-identify on a given day as female, and men’s shelters must admit females who self-identify as male. It is HUD’s belief that shelters should be able to decide for themselves how to define sex consistent with state and local law,” the spokesperson said in a statement.

Ian Thompson, a senior legislative representative in the American Civil Liberties Union’s Washington Legislative Office, condemned HUD’s Thursday statement, calling it “vile and disgusting.” “Never once does HUD even acknowledge the basic humanity of trans people or recognize what it means to be transgender,” Thompson wrote in an email to The Intercept. “Based on this, it is clear that HUD intends to give taxpayer-funded shelters license to turn away trans people experiencing homelessness based on the religious beliefs of the provider.”

The announcement came just a day after HUD Secretary Ben Carson testified before the House Financial Services Committee. In response to a series of questions from Rep. Jennifer Wexton, D-Va., about the 2012 and 2016 Equal Access rules, Carson stated, “I’m not currently anticipating changing the rule.” It is unclear whether Carson knew that his department was set to modify one of the rules the next day.

“I don’t know if he was speaking out of ignorance or malice, but I know his department is acting on both ignorance and malice,” said Gillian Branstetter, media relations manager at the National Center for Transgender Equality.

Equal Access rules make a meaningful difference in access to shelters for transgender people, said the Center for American Progress’s Gruberg. She cited a 2016 phone survey conducted by the Center for American Progress and the Equal Rights Center, which found that only 30 percent of shelters in Connecticut, Washington, Tennessee, and Virginia said they would house a transgender woman with other women. The states with gender identity nondiscrimination protections — Connecticut and Washington — were twice as likely to help a transgender caller access an appropriate shelter.

Even when they can access shelters, transgender women are uniquely vulnerable to abuse. According to the 2015 U.S. Transgender Survey, 70 percent of transgender survey respondents who stayed in a shelter in the year prior reported some form of mistreatment, including being harassed, sexually or physically assaulted, or kicked out because of their gender identities. They were also four times less likely to own a home than the overall U.S. population.

This news comes on the heels of several incidents of deadly violence touching the black transgender community. In just the past week, three black transgender women died after being shot, according to the Human Rights Campaign. Claire Legato, 21, shot in Cleveland last month died on April 15; Muhlaysia Booker, 23, was killed in Dallas on May 18; and Michelle “Tamika” Washington, 40, was killed in Philadelphia on May 19.